This is what you find on a sunny day at Harris Beach State Park near Brookings, Oregon. I was particularly pleased with the seagull who decided to photo-bomb my picture. Peggy and I had to deal with stormy weather when we visited there last week.

So, I was going to write about Chesley Burnett “Sully” Sullenberger III today, the heroic American Airlines pilot who saved 155 people in 2009 by landing his goose-disabled US Airways Flight 1549 on the Hudson River, but I got distracted. It happens, you know.

Peggy and I took a trip over to the Oregon Coast for Valentine’s Day and ended up at Harris Beach State Park in Brookings. It was a stormy three days filled with 40-60 MPH winds, slashing rain and crashing waves— the perfect weather for romantically snuggling down in our 22-foot RV and eating chocolate as the world roared by outside.

We had our rain hats, rain coats and rain pants, however, so we got out for a couple of walks: once when the sun was threatening to shine and once when the heavens were threatening to open up and dump oodles of rain. And we took our cameras. Peggy wanted to play with her new Canon EOS Rebel T6i with a Tamron 16-300 mm telephoto lens. I took my trusty little Canon Powershot G7x. The conditions weren’t ideal for photography— grey skies matched grey seas matched grey rocks, but we had fun seeing what we could capture. 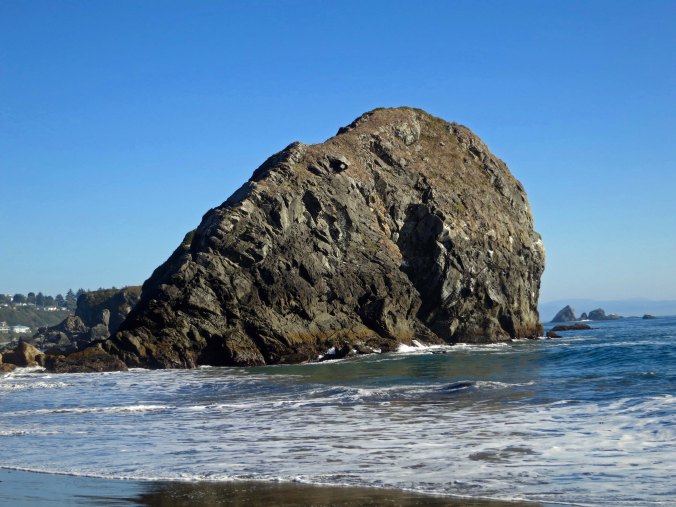 This sea stack was in the background on the lead picture for this post. Again, I took this photo on a sunny day. Note the large crack/cave on the front. (Sea stacks are rocks in the ocean that have been created by the endless waves eroding the shoreline.) 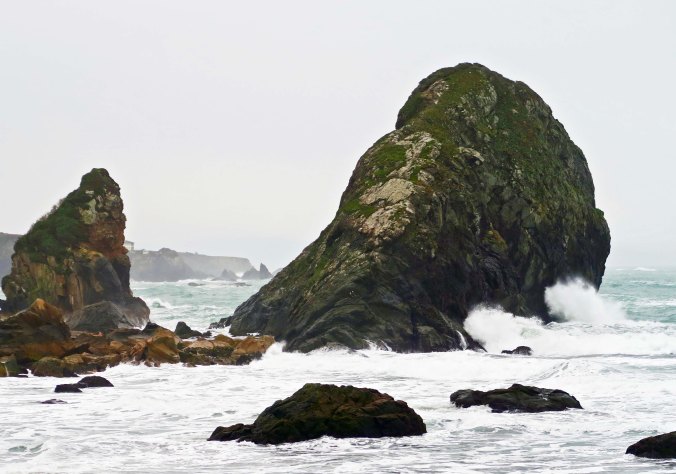 This is what it looked like last week. A wave is crashing into the cave. (Because of a high tide abetted by the stormy weather, I had to take this photo from a different angle.The sea stack on the left is included in photos below. Brookings is on the distant cliff.)

When we arrived home, I was eager to see the results and process the photos. I did that instead of working on the photos I took of Sully’s plane at the air museum in Charlotte, North Carolina when we visited there in early January. Bad Curt. As a result, today’s post is on Harris Beach. Sorry, Sully. Next Monday is yours. But then I will be in Las Vegas. Hmmm.

Harris Beach State Park sits on the edge of Brookings and is about three scenic hours away from where we live. We followed back roads to Highway 199, otherwise known as the Redwood Highway, to US 101 on the Pacific Coast and then followed it north to Brookings. It is a gorgeous park filled with imposing sea stacks and Oregon’s largest island, which happens to be reserved for the birds. Some 100,000 hang out there during mating season, including tufted puffins who use their webbed feet to dig their nests into the ground.

The island is off-limits for two-legged types like us, however, so we were left with taking photos of rocks, waves, and driftwood.

Our semi-sunny walk took us behind the large sea stack (small island?)  and showed us that the large cave we had seen on the front went all of the way through. The waves coming in had developed a small cove. (Photo by Peggy Mekemson.) 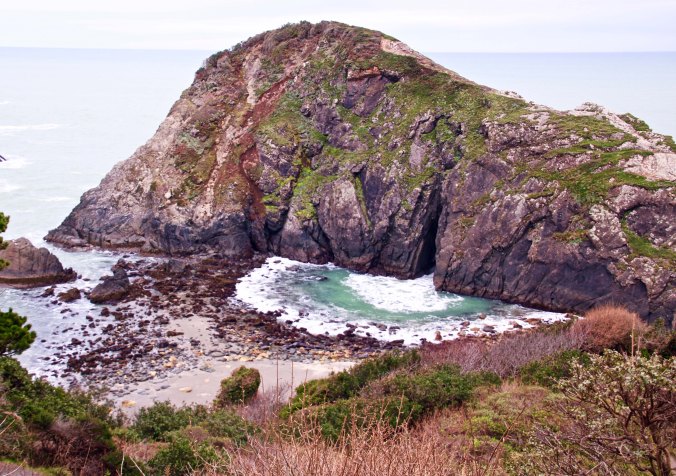 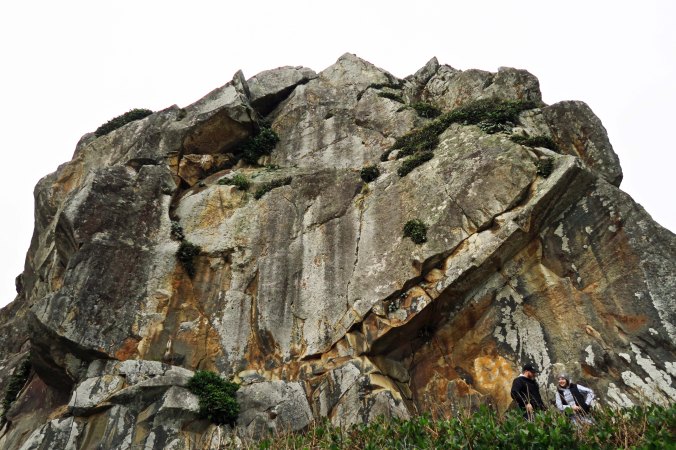 As we hiked down to the cove, I turned around and photographed the rock cliff we were walking around. Note the couple on the lower right for perspective. I felt that the grey sky set the cliff off more than a blue sky might have.

I caught a photo of ‘my Valentine’ appropriately dressed in red as she made her way down the trail. I had her move to the center of the trail so the Pacific would outline her and provide depth.

This rock overhang provided a bower for the trail. (Photo by Peggy Mekemson.) 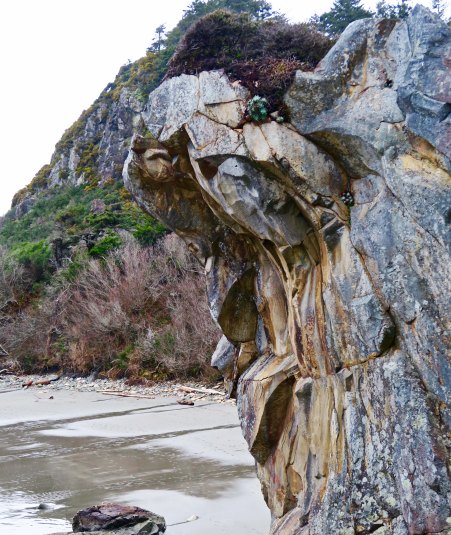 I took a close up of the overhang.

Another close up that intrigued me was this water caught in a small crevice that provided something of an abstract photo. 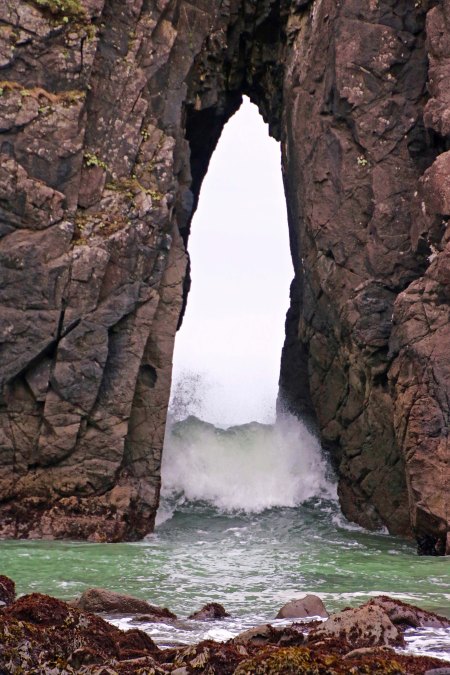 Down on the beach, Peggy caught a shot of a wave coming through the split in the rock. Blue skies may have provided more depth but I felt the grey skies placed the focus on the wave.

I moved back to capture some yellow rocks in the foreground to add color to our grey day. 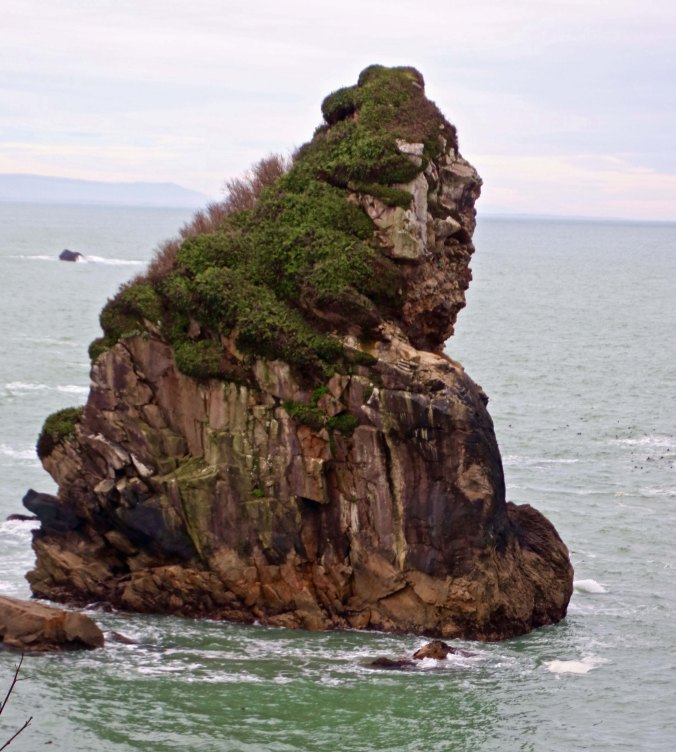 A sea stack  just south of the split rock caught Peggy’s attention and she filled her lens with it.

I placed the sea stack in its surroundings, again using a yellow rock on the beach for a splash of color.

A conglomerate rock and driftwood caught my attention next. 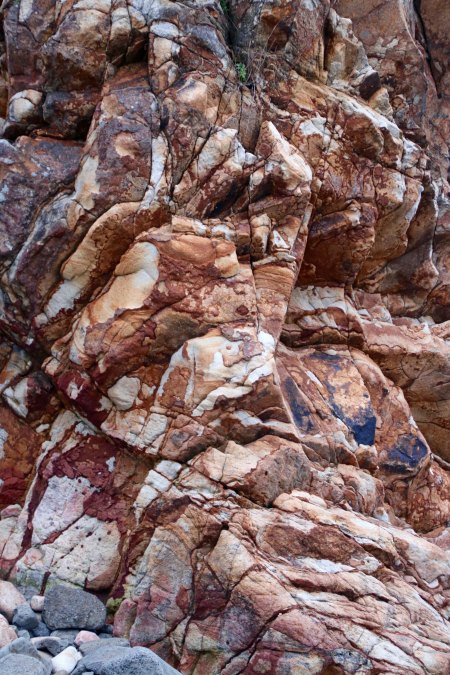 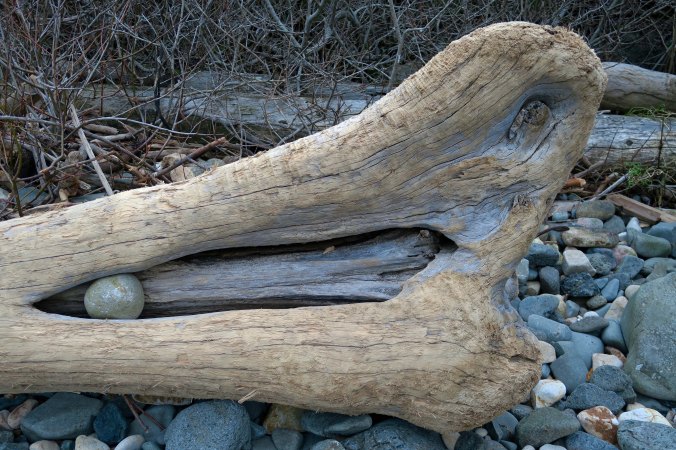 While I went for the driftwood and the rock it had managed to capture.

Our second walk took us down to the main beach area at Harris Beach State Park. The weather was more iffy so Peggy was more careful with her camera, but my small Power Shot G7x is used to being abused.

I used Scotch Broom to add color to a shot looking north up the beach.

Peggy’s telephoto lens provided a better view of just how many sea stacks are found on Harris Beach State Park, and a sense of the grey day.

I used these waves to provide a lead in to the sea stacks.

Talk about a lead in… What about this drift log? The driftwood speaks to the power of storm-tossed seas. Note the colorful roots on the left. 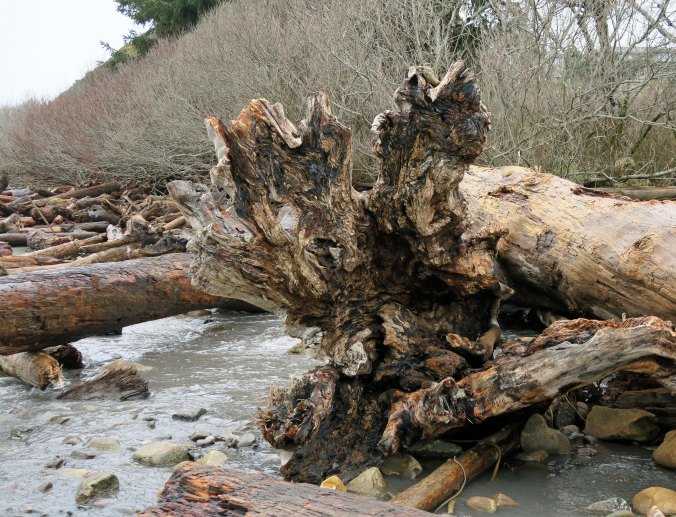 I also found these ‘moose antler’ roots interesting. With a little imagination I found the moose’s eye and nose.

While I am on the subject of wildlife, I dubbed this Turtle Rock. 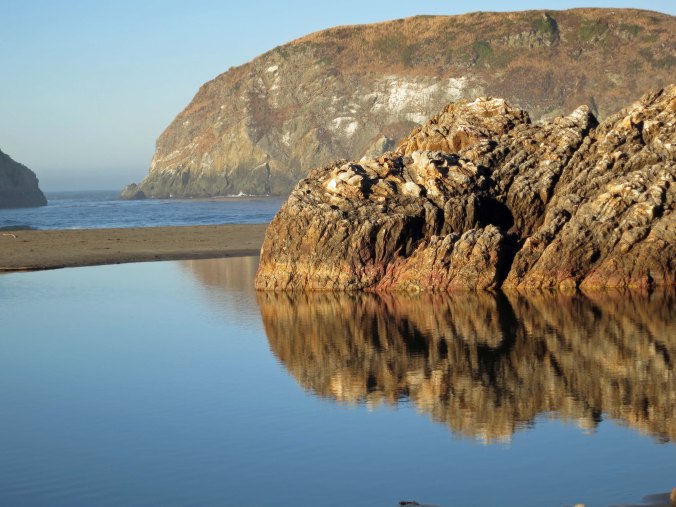 Another clear day shot taken from the beach area. Bird Island is in the background.

Peggy took this shot of the turbulent Smith River on our way home. She really liked the contrast of the green moss growing on the oak tree with the white rapids. The weather had been so wet we found 74 waterfalls careening off of the mountain and into the river as we drove up Highway 199.

I’ll conclude with this hill-hugging rainbow we found welcoming us back to the Applegate Valley.  Peggy shot this photo through raindrops on our windshield. Note: there is a slight double rainbow.

Wednesday: It’s back to the Sierra Trek and a 16 mile day without any water sources. One Trekker is lost and I face a rebellion and a rattlesnake.

Monday: Will it be Sully?