Beauty in the Sierra Nevada Mountains comes in many forms, such as this Red Fir giant I found on Seavey Pass along the Pacific Crest Trail.

In my last post about the Sierra Trek, I noted that the clock was ticking. We had a route that threatened to be covered in horse poop, a sponsor who believed that backpacking 100 miles in 9 days was insane, a barely edible meal of Ham Cheddarton for a quarter of our dinners, and 60 people, aged 11-70, ready to follow us across the mountains.

It was now time for Steve and me to go out and check the route, to get a feel for how much trouble we were actually in! We had agreed to split the preview: Steve would backpack the first third of the route from Squaw Valley to Robinson Flat while I backpacked the second third from Robinson Flat to Forest Hill. We’d cover the final third the weekend before the Trek.

A note about today’s photos: As I mentioned previously, the photos for this series on the first Sierra Trek are all taken from later treks.

Steve had never backpacked alone and I had only been out by myself three times. It promised to be an adventure. In addition to reducing the odds that we would lose 60 people in the woods, we also needed to check out potential camps, water availability, and the difficulty of the trail. I wanted to develop a feel for what we would be putting our participants through.

Nervous is the best word to describe my mood as I packed up. Jo Ann was heading off for a clothes-buying spree in San Francisco. I told her to enjoy herself, threw my backpack in the back of my Datsun truck, picked up Steve, and drove to Squaw Valley. We made a brief stop in Auburn to recruit my father-in-law’s Springer Spaniel, Sparky. I felt the trip might be a little rough on my basset hound, but wanted some doggy companionship. I left Steve weaseling a free ride up the Squaw Valley tram and headed for Robinson Flat, a camping area on the Western side of the Sierra.

Some experiences burn themselves into your soul. This was one. The beauty and the variety of the wilderness captured me. I was starting at around 7000 feet in the heart of red fir and Jeffrey pine country and dropping into the Sierra Foothills where incense cedar and ponderosa pine provided shade.

Along the way I would descend into river canyons filled with inviting pools and scramble out to follow hot, dry ridges. Besides Sparky, a coyote, two skunks, several deer, a porcupine, and numerous birds provided entertainment. I also met my first bear, a big brown fellow that came ambling out of the brush and increased my heart rate twofold. Even the ever-curious Sparky took one sniff and made a quick retreat behind me. Then she growled.

Being alone enhanced and intensified the experience. The days were exciting but the nights bordered on scary. After the bear, I imagined all types of creatures sneaking up on us as we slept. Sparky was even more nervous. I loaned her my new Pendleton shirt to sleep on. She had chewed it to rags when I woke up in the morning. I didn’t have the heart to scold her. Had I known what she was up to, I might have joined her.

This photo taken near Sonora Pass illustrates both the distances and possible solitude of hiking in the Sierras. You can see the trail as it comes into the photo (bottom left), and works its way  down the slope. Look carefully and you will see it on the distant ridge.  The small dot on the ridge is one of my trekkers. Can you find the pass? (Look for the sharp switchback.)

It was the physical challenge that made the deepest impression. I was strong but out of shape. Even had I been better prepared, I wasn’t psychologically ready for the experience of hiking 10-15 mile days with a 50-pound pack on my back. Nor was the territory gentle. I was hiking in and out of 1000 foot plus deep canyons following steep, winding trails that had challenged the 49ers in their endless search for gold. Once I found myself lost on a brush choked mountain and had to fight my way free.

Treks are hard. Period. Not one has ever been as hard as my first one, but that doesn’t mean they are easy. You start out squeaky clean, like Marvin, and then the days begin to take their toll.

This is Marvin after several days. I believe he is surrendering to mosquitos.

As I approached Forest Hill, temperatures climbed to a scorching 105 degrees. To top it off, I was breaking in a new pair of German-made Lowa boots. All of the backpacking literature of the day emphasized sturdy foot ware and it didn’t get much sturdier than Lowa. Considering my feet blister at the mere sight of a boot, they were not happy campers. By the third day I had blisters on top of blisters and my feet resembled a hyperactive moleskin factory.

But, I made it. I proved to myself I could do it and that the Trek was possible. With the proof came an incredible high. I hiked into Forest Hill singing.

Steve showed up about an hour later. He was beaming and jumped out of the truck to grab me while Sparky did much wagging of tail. The three of us did a little dance and Steve and I both tried to talk at once as we told our stories. Steve had seen ‘migrating’ rattlesnakes and lots of bear scat. He peed around his camping area to mark his territory and warn the bears to stay out. They did. The second day a hawk had ‘chased’ him down the trail for miles. I wondered what Steve had been smoking. But now he was on the same natural high I was. We were ready to Trek.

I couldn’t wait to share my experience with Jo Ann. I hurried home, dropping off a tired Sparky and a pooped Steve. I burst into the house full of enthusiasm. In comparison to my bubbling nosiness, Jo was funeral quiet. I made enough noise for both of us and suggested we head out to Chuck’s, our favorite steakhouse. After three days of backpacking food, I was hungering for a mouth-watering T-bone. We were in the middle of our first Scotch when Jo Ann looked at me miserably and announced she had something to tell me.

“Curt,” she confessed, “I didn’t go to San Francisco over the weekend. I went to Los Angeles and spent the weekend with a man I met at a workshop last month.”

My world stopped. My heart broke.

There was no Trek, no future, no me. The steak in my mouth turned to sawdust and my stomach became a tight, heavy knot. Jo Ann went on to tell me about the psychiatrist she had met at a conference in San Francisco and how she was scared about losing me, about how she still loved me. Maybe, but something broke that night, something that could not be mended.

I had to get out of town, to think, to recreate myself.

The next morning Jo dropped me downtown. I called Steve, Nancy and Nan into my office, closed the door and gave them enough details so they would know why I was leaving. In addition to being employees, they were all friends. It was hard for me not to break down. I promised that I would be back in time for the Trek and discussed what needed to be done in my absence. Steve’s primary job would be to review the last section of the trail. He drove me to the airport.

My choice of where to go was determined by the first airplane leaving Sacramento. It was a Western Airlines flight to Seattle and I was on it. It was Tuesday, 12 days before the Trek.

Lonely and confused I walked the dark, rainy streets of Seattle. I missed Jo desperately and had a hard time imagining the future. I hit the bars and drank. It wasn’t that I was naïve. I knew people could grow apart as well as together, and that we had grown apart. Nor was I innocent. I had been tempted more than once in the ever-present world of sexual attraction: a hand touched here, a smoldering glance there. My world was one filled with bright, attractive women. But I had really believed I was married for life.

I had started drinking at a bar early on Friday afternoon when the words of a Jimmy Buffett song caught my attention. “I spent four lonely days in a brown ugly haze and I just want you back by my side.” I returned to my motel and called Jo. She was on the next flight to Seattle. We grabbed a ferry and headed over to Victoria where we had spent happier times. Maybe it would work.

Back at Lungland on Monday things were iffy. On the down side of things, Steve hadn’t previewed the last section of the trail. Who knows why? Our last three days would be potluck. The good news was that our generous food donation from Lipton had arrived, umpteen boxes of it. It was scattered all over the floor of our volunteer room. 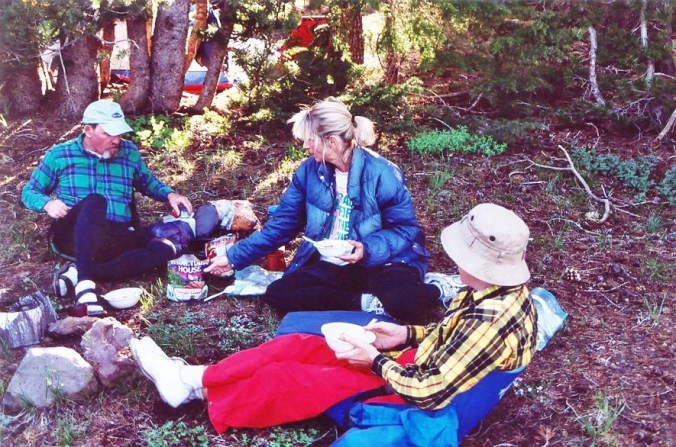 From the very beginning, I divided my participants into food groups of 3-4 people. That way, cooking equipment and responsibilities could be divided up. We’ve tried many foods over the years. Mountain House, shown here, has been consistently good.

When we are lucky, trout can be added as a supplement. My son-in-law Clay had sacrificed himself to mosquitos to capture this fellow. A little butter, a little spice— mmm good!

Saturday came fast, faster than a speeding bullet, faster than Superman could even dream of flying. Suddenly it was just there. There was no sleeping on Friday night. I had to pack and I had to worry. I had to worry a lot. There was no way I had enough time to worry, so I was still worrying when I met my support crew at a small restaurant just outside of Squaw Valley at 7:00 AM. The first Sierra Trek was about to get underway…

NEXT BLOGS: Friday, Burning Man in photos; Monday, a wrap up on historic Boston; Wednesday, the next episode of the Sierra Trek