I laugh every time I see this shot of Petros. Somehow I think ghost, or maybe preacher. “Shall we gather at the beach, brothers and sisters?” What do you think?

It’s time for another blog quickie! In fact there will be several short posts over the next few weeks. Peggy and I are heading back East to visit with our children and grandchildren in Connecticut and North Carolina for Christmas. I doubt that our five grandsons will allow much time for blogging. 🙂 Besides, you can probably use a break from my thousand word essays!

I blogged about Petros once when I was out wandering around the Mediterranean and met him on the Greek Island of Mykonos. You can go here for the full story. But the bird is so magnificent that he deserves a second post. If you’ve ever been to the island, the odds are he may have hit you up for a fish. Or ignored you. He sees lots of tourists.

Actually this is Petros II. Number one showed up in the 50s in really bad shape. The good folks of Mykonos nursed him back to health. Rather than fly away and work for a living, he decided to hang around and live the good life. Jackie Kennedy even found him a mate. Unfortunately, Petros I met his demise under a truck. 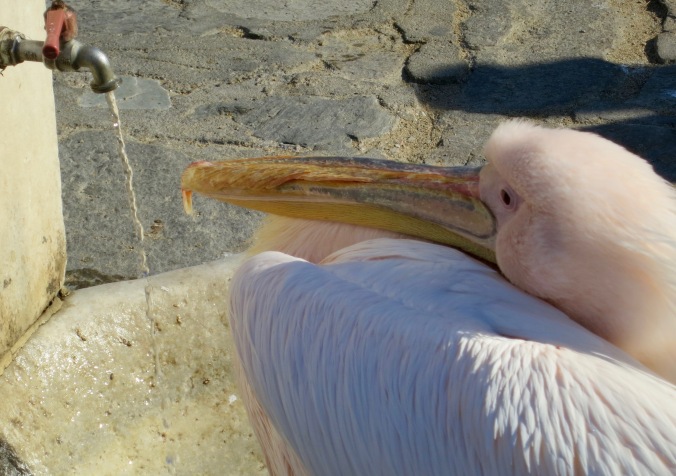 Speaking of the good life, Petros even has his own little fountain to hang out in.

The bird was quickly replaced. Not only was he well-loved, he was a great tourist draw. One time another island even stole him, hoping to cash in on his popularity. There was almost a war.

That’s it for today… As you read this, Peggy and I are winging our way to Boston. 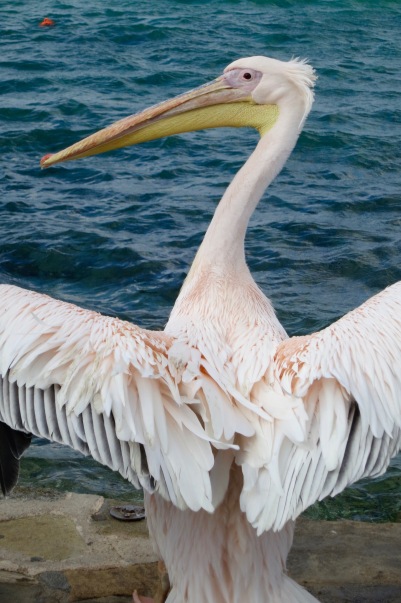 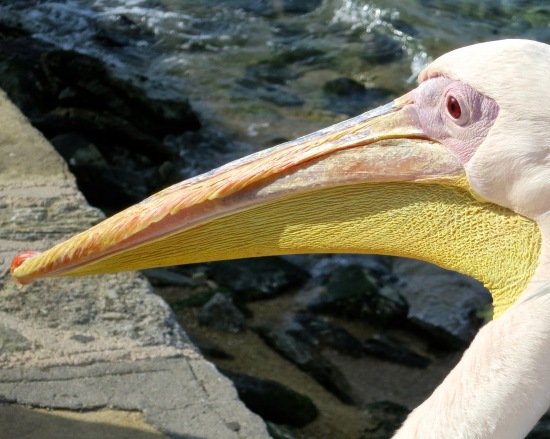 NEXT BLOG: The picturesque town of Mendocino on California’s rugged northern coast.

28 thoughts on “PRESENTING: Petros the Magnificent… A Pelican Of Mykonos”