The Sierra Nevada Mountains as seen from a road leading into Porterville, California. They appeared to be floating in the sky. (Photo by Peggy Mekemson.)

Greenhorn: a person who lacks experience and knowledge.

There came a time when I was out of options. I had gone as far south in California’s great Central Valley as I cared to go. It was time to head east. It was time to leave the flat lands and climb over the massive Sierra Nevada Mountain Range. They were looming ominously in the distance. 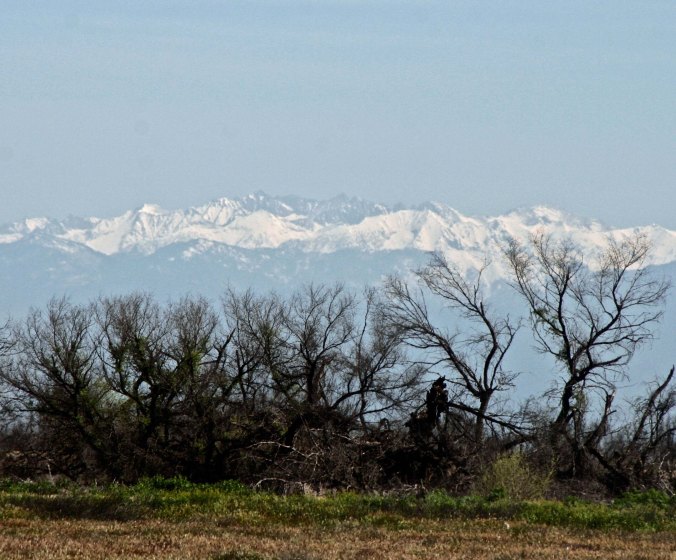 Another view of the Sierras from the Central Valley. These two photos were looking north. I would cross over to the south several thousand feet lower. (Photo by Peggy Mekemson.)

I was no stranger to the Sierras. I had been raised in their foothills and spent 15 years leading hundred-mile backpack trips up and down its spine. I had hiked their length and breadth. I’d even biked across them a couple of times. But was I ready for them, now? Had my week of biking down the Central Valley prepared me for the tough climbs I knew were ahead of me? Were my knees and fat cells ready for the challenge?

There was only one way to find out.

I spent a half day in the town of Porterville having my bike tuned up. The town perches on the edge of the foothills and the edge of the valley. When I left the town, I would literally begin my climb. As usual, I picked a remote route. My plan was to start off on a country lane with the name of Old Stage Road. It wanders through the foothills and eventually runs into Mountain Road 109 which morphs into Jack Ranch Road before finally dropping down to Highway 155 at Glenville.

From there I would begin my climb up and over Greenhorn Pass, the true test.  I wasn’t a greenhorn, but I was feeling a little green. Kermit would have seen me as a soul mate. I had never been over the road. I had no idea of what lay before me. My goal was to reach Isabella Lake, a reservoir east of the city of Bakersfield and, for me, the gateway to vast desert lands of the Southwest.

Leaving Porterville after lunch, there was no way I would make the 60 miles in one day, however. So I lollygagged. Why hurry? Orange trees greeted me as I biked out of town. Sampling one led to sampling two. California grows great oranges. Eventually the fruit trees stopped but it was a beautiful spring day and the hills were gentle. Luscious green grass was sprinkled with cheerful flowers. Happy cows munched away out in the meadows.

One of the orange trees I biked by near Porterville.

The road worked its way through the foothills that were coated with spring green.

Rock outcroppings along the road were quite beautiful.

As were the flowers, such as these California Poppies…

And these carpets of white flowers further up in the foothills.

After some 30 miles, I began looking for a place to land along Mountain Road 109. Forget campgrounds or motels. There weren’t any. A babbling brook caught my attention. It was hidden by trees in a small canyon beside the road. The trees would also hide me. All that stood between me and Shangri-La, was a barbed wire fence. I hadn’t seen a car for 15 minutes and didn’t hear any coming so I quickly took off my panniers and tossed them over the fence, followed by my bike and then me with nary a tear in my clothes. Barbed wire has a nasty disposition. Panniers, bike and I then disappeared into the trees where I set up a pleasant camp a few feet away from the stream. I went to sleep that night to the gentle sound of water cascading down the canyon and a talkative hoot owl.

I awakened by a deep, loud, low moo, the type that comes from 2,000 pounds of bull. I couldn’t see him, which meant he couldn’t see me. That was the good. The bad part was that he was between me and the fence. I set about whipping up breakfast on my small backpacking stove, hoping the bull would move along. He didn’t.

As I was loading my panniers, I was struck with how red they were. Bull fighters use red capes, right?  They make bulls angry and encourage them to charge. With a certain amount of don’t-want-to, I picked up my bull-charging panniers and headed toward the fence. The bull was pressed up against the fence and was as big as his moo. His bull-hood almost dragged the ground. He glanced at me disdainfully and returned his attention to staring across the road. I was saved by two girls. A pair of pretty heifers were making cow eyes at him. He could have cared less about me. I didn’t push my luck, however. In a flash, my bike, panniers and I were over the fence and on our way. But not before thanking the girls.

Peggy and I found this Texas Longhorn not far from where I had my bull encounter. The bull didn’t have horns like this, but he was a heck of a lot bigger!

Two hours later I was eating my second breakfast in the tiny town of Glenville. A pair of old timers eyed me suspiciously. “Where you heading?” one asked. “Over Greenhorn Pass,” I’d replied.

“Oh, I wouldn’t do that. There’s a storm brewing up there today. It’s supposed to snow like crazy. You’ll freeze to death.” He warned me enthusiastically.

“That’s nothing,” his friend declared, not wanting to be outdone in the local doomsday competition. “It’s the drop off on the other side of the pass you need to worry about. Bike brakes can’t handle it.”

Peggy and I found this fun display in Glenville. I didn’t remember it from my bike trip. The restaurant is on the other side.

Remember the days when gas was $.40 a gallon? Probably not…

I suspected that the guys were having a bit of fun at my expense so I headed off with only a slight twinge of concern. My attitude changed when I was flagged down by an RV driving down the mountain I was struggling up. “I couldn’t believe how steep it is coming up the other side,” he told me. “I wouldn’t go down it on a bike.” My worry level jumped from a .01 out of 10 to a 9.99 in a nanosecond. But the only option would add a hundred miles. I labored on. 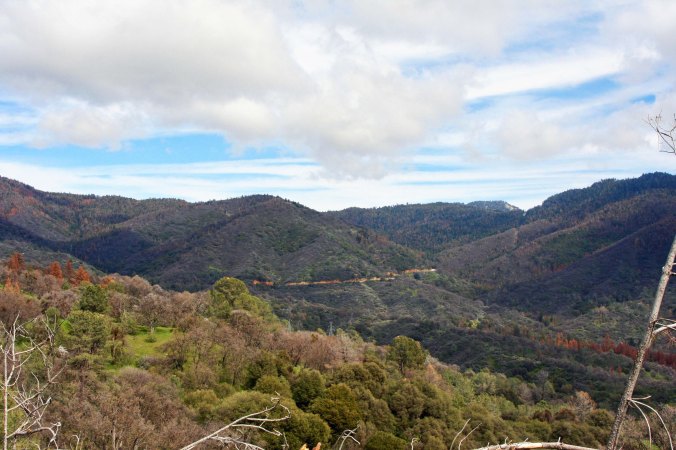 The distant road snakes its way up the mountain toward Greenhorn Pass.

Peggy and I climbed the pass in our van under much more pleasant conditions but these trees mark our elevation gain and are near where the snowstorm started.

Thirty minutes later it started snowing. It wasn’t a blizzard but the snow was coming down fast, in large flakes. Visibility was limited. It was cold. I stopped to put on more clothes. At least, I thought to myself, if everyone is right about the drop off on the other side of the pass, I’ll be below the snow-line quickly. It was small consolation— like jumping from a freezing boat into icy water. And first I had to make it to the top. Hypothermia was a real concern. I tried riding but bicycling in the snow without studded tires is difficult and dangerous. So I got off and walked. Summer cabins off to my right caught my attention, but they were still boarded up.

Fortunately, I hit the top in a couple of miles and I wasn’t frozen solid. Better yet, the snow had turned to a few fluttering flakes, and the road off the pass was wet but not covered in slush. I’d survived the bull and the snow, but what about the downhill. A sign announced a 13% grade; 6% is usually enough to post a warning. I thought fondly of the apartment I’d left behind in Sacramento. But what the hell, life’s short. I climbed on my bike and started down. Soon, I was smelling my brakes, like a semi out of control. It was a long, long downhill. I stopped often to let the brakes cool. Even with that, my wheels had lost their true and were slightly warped by the heat when I hit the bottom.

Greenhorn Summit as it looks on our present trip to retrace my route. 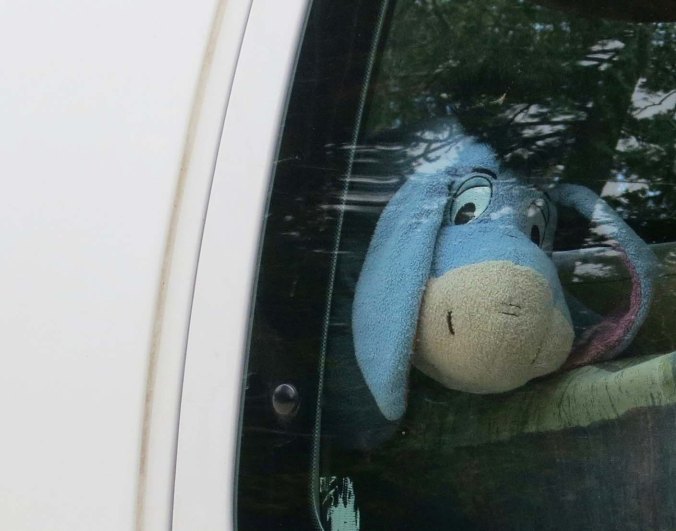 Eeyore peered out the window checking the elevation. Shortly afterwards he had covered his eyes with his ears as Peggy started driving down the mountain. Even though we were using low gears, we could soon smell our burning brakes. The trip down was as scary as it had been on the bike.

I found another motel and declared another layover day. I’d earned it. The motel owner told me that a couple had biked off the pass the week before and then hitchhiked 50 miles into Bakersfield to have their wheels trued. I managed mine with a spoke wrench. Given my mechanical aptitude, it was a small miracle.

NEXT BLOG: Into Death Valley. (Peggy and I will soon be disappearing into a remote part of Canada and may not have Internet access. Also, as noted before, all photos are from the trip we are present on.)

29 thoughts on “A Huge Bull, a Blinding Snowstorm, and an Insane Downhill… The 10,000 Mile Bike Trek”