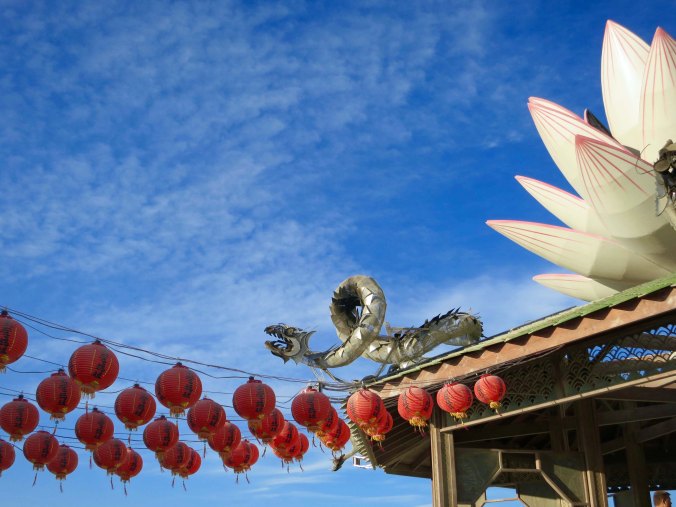 The Temple of Mazu, Goddess of the Empty Sea, was guarded by dragons, a manticore, and thousand-eyed demons at Burning Man.

The folks at the Department of Public Art in New Xishi City, Taiwan decided it was time to have a presence at Burning Man— so they built the Temple of Mazu, Goddess of the Empty Sea, and brought it to Black Rock City. It is an ideal location for the Goddess. The Black Rock Desert was once part of a large Pleistocene lake of sea-size proportions. Now it is mainly dust and rock, a mere shadow of its ancient past.

The written description about the temple tells Burners, “You walk through the dust and heat of day, beyond the heart of the city, and from the haze before you emerges a shape that is both plant and place, flower and temple, both open and contained. No fence keeps you out, but one hundred and eight lanterns mark out the space, like a fairy ring in the forest, like the hundred and eight beads of the Buddhist rosary.” A giant lotus rises from the heart of the temple. Dragons, a manticore, and thousand-eyed demons guard it. I visited the temple during the day and at night.

A giant lotus rose from the top of the Temple Of Mazu. 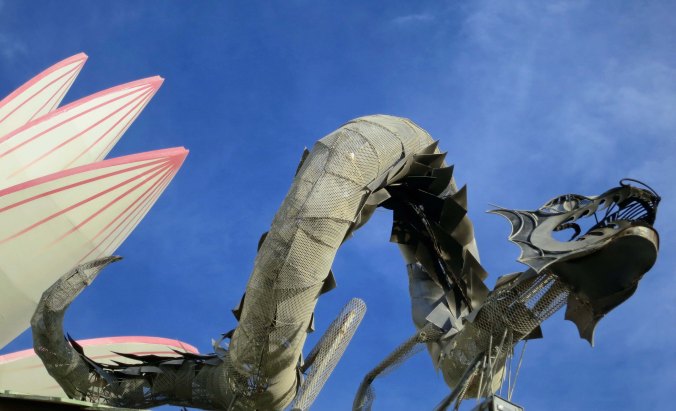 A mythological manticore with its scorpion tail… 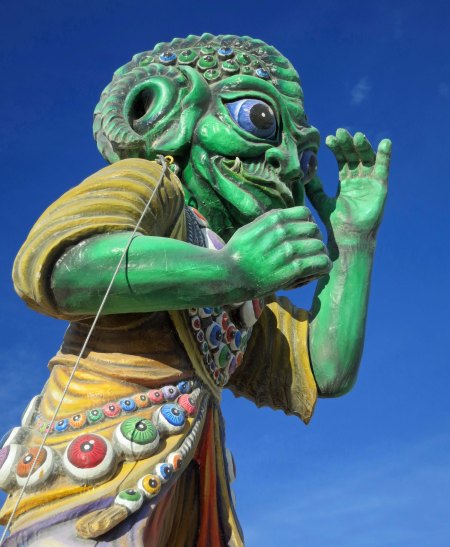 A view of the Mazu Temple at night displaying its lantern, lotus and fiery protectors.

A fire-breathing dragon perched on the temple, blasts out its fiery breath.

A windmill reaching into the sky is usually the symbol of a lonely farm or ranch in the dry West of distant vistas. Often they can be seen from miles away. So when I saw a windmill way out on the Playa, I assumed I would find a structure reflecting a ranch or a farm. Instead I came on a chapel where a wedding was being held. The Prairie Wind Chapel is the creation of Robert Hoehn and the Wind Tribe out of Venice, California. According to Robert’s creative imagination, the chapel was “excavated from a dust bowl near the border of Oklahoma and Saskatchewan.” It “was once the heart of the roving town of Aeolia until a tornado wiped it all from the map.” A Victorian reed organ served as the centerpiece of the chapel. Burners were invited to stop and rest, or play the organ, if they were so inclined.

Looking up at the windmill attached to the Prairie Wind Chapel. Photographs from the 1930’s Dust Bowl had been placed on the side.

A side view of the Chapel.

And a front view. The wind was invited into the chapel whenever it blew by.

A close up of the organ plus candle lanterns and jaw bones. Playa dust, left behind by the visiting wind, outlines everything.

This impressively carved bull skull with its adorning feathers was hung above the organ.

Skeeter Cohen’s Life Cube Project from Dobbs Ferry, New York was based on the concept “that if you write down what you want to accomplish in life, the chances of attaining it are much, much higher.” Cards were provided for jotting down Burners aspirations, or you were welcome to write them out on the large, cube-like building. Large murals had been painted on the front and sides of the structure. What impressed me most were the 440 individual art creations on the back.

Burners were invited to express life-time goals at The Life Cube building. Covered with murals and graffiti,it was designed to be burned.

My friend, Don Green, captured this mural on the side of the building.

440 individual drawings and paintings covered the back of the building. 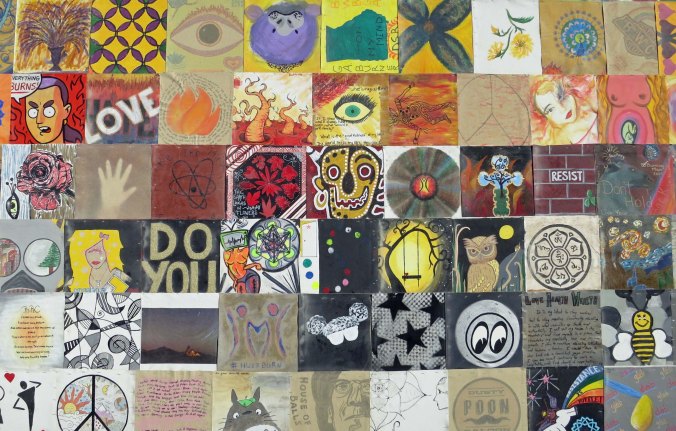 “The Black Rock Bijou is that movie theater located in the Deep Playa, outside of Black Rock City that may or may not exist. Our mission is to shock and delight you with a movie theater that transports you to another time and place during your Deep Playa exploration.” –Release Neuman and Sam Gipson

The Deep Playa is the “Outback” of Burning Man, to steal a term from our Aussie friends. All that separates it from the desert is a fence that BMO puts up to protect and contain Burners. DO NOT CROSS  is the rule. Given that my Burning Man name is “Outlaw,” of course I had to climb over. A BMO truck was bearing down on me in seconds, kicking up a dust storm in its wake. Apparently the organization keeps Rangers out there with binoculars. As fast as they were, I was back over and on my way by the time they arrived. Let’s hear it for spry 72 year olds!

A relatively small percentage of Burners make it to the Deep Playa; it’s a long bike ride and a much further walk. But some artists enjoy placing their art out there. You have to work to appreciate it. That’s apparently how Release Neuman and Sam Gipson feel about their beautifully detailed Black Rock Bijou. It’s a theater out of the past that actually shows movies at midnight, 2:00 and 4:00 a.m. (beyond my bedtime).

The Bijou’s design is based on that of the Royal Theater in Archer, Texas, which was used in The Last Picture Show (based on Larry McMurtry’s book). I’ve been to Archer, not so much to see the Royal Theater as to check out the huge bookstore McMurtry has turned his hometown into. Peggy and I will be returning there this spring as part of our 10,000-mile road trip through the US and Canada.

“Strangers on a Train” was playing at the Black Rock Bijou. If the first showing hadn’t started at midnight, I would have gone.

I’ll provide a side view of the theater for my last photo today. Different murals are put up each year. This one reflected Burning Man’s 2015 theme: A Carnival of Mirrors.

NEXT BLOG: Who goes to Burning Man… a look at Black Rock City’s annual census.