Serpent Mother lights the night sky at Burning Man in 2015.

The art at Burning Man is what pulls me back to the event year after year. Its unending creativity, sense of humor, quality and sheer quantity capture my imagination. I can’t get enough. My next three blogs will focus on what I consider Black Rock City’s most powerful art form: sculpture. I have already done posts on Medusa and R-Evolution. Today I will feature a 168-foot flaming serpent, a unique and moving sculpture from the Ukraine, a massive fish monster that emerges from the sand, a series of strange bronze sculptures with an out-of-world beauty, and a huge storybook shoe.

The first time I met Serpent Mother coiled around her egg was in 2006. To say she caught my attention is an understatement. I was delighted to see her back at Burning Man in 2015. Created by the Flaming Lotus Girls (and guys) out of the San Francisco Bay Area, the large-scale, fire-breathing snake is a classic example of the group’s work.

Serpent Mother on guard duty. I don’t think she is in danger of anyone messing with her egg.

Her impressive head with its flaming teeth can rise 20 feet above the desert floor.

A crowd of Burners gather to watch her egg hatch. She appears to be warning people to back off.

As the egg opens, it shoots flames 40 feet into the air. Check her head. I think she is smiling.

Alexander Milov from Odessa, Ukraine titles his sculpture of two people sitting back to back, Love. While communication between the two adults has broken down, their inner children are reaching out to each other, touching hands and hoping to reestablish contact. How often do we let out anger, or pride, or jealousy get in the way of our friendships and love?

I felt that this sculpture was quite moving. The seated people provide perspective on size.

Rebecca Anders from Oakland, California is responsible for creating the Illumacanth, a huge fish that rises out of the Playa and is obviously hungry. Walking into the monster’s mouth reminded me of Jonah and his whale. Too bad Rebecca didn’t give her fish jaws that snapped shut. But that probably would have been a heart attack waiting to happen.

Hard to imagine something with a bigger mouth than Illumacanth.

Don caught this photo of Illumacanth at night. Are the Burners about to be eaten? (Photo by Don Green.)

There was an old woman who lived in a shoe— She had so many children she didn’t know what to do. I can never keep myself from adding “obviously.” Five Ton Crane, which is an interesting name for an art group, created this rather large boot of a home. Maybe they needed a giant crane to move the boot. I was really hoping to get inside, treasures were promised, but the doors were not open the two times I visited. Still, I was hardly disappointed.

A Burner is peaking in a window on the left, hoping for a view inside. This boot had a lot of ‘sole,’ so to speak.

So, do you think you could live here? The sun behind the shoe provided dramatic lighting for the photo.

I was intrigued by how well the two-ton bronze sculptures created by Mario Martinez in Berkeley, California fit into the Black Rock Desert landscape. Each of the molecule-like structures took three to four months to make. Designed on a 3-D printer, Martinez used the ancient lost wax method to create the sculptures. They were among my favorite pieces at Burning Man in 2015.

The ‘molecules’ felt like they belonged in the Black Rock Desert, left behind by an alien race.

Another view of Mario Martinez’s art. 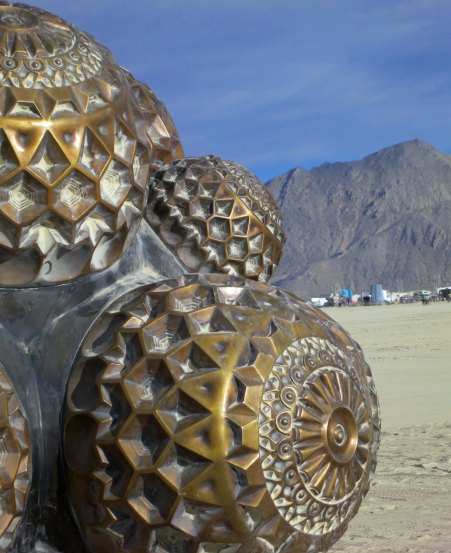 Black Rock City and a mountain provide the back drop in my last photo for this post.

42 thoughts on “A Shoe, a Serpent and a Fish— Plus… The Intriguing Sculptures of Burning Man”