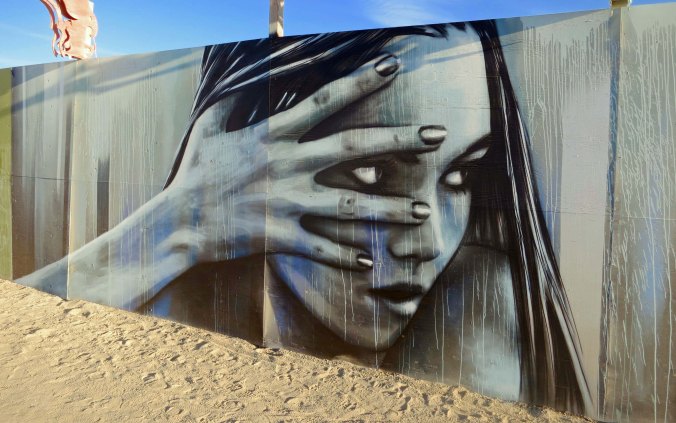 Destined to last a week, Burning Man murals provide mural artists with an opportunity to display their work, and for Burners to enjoy the murals.

Somewhere around 30,000 BC, a group of guys and possibly gals, decided to try their hand at creating murals deep in the caves of southern France. Apparently folks liked what they saw. The art form caught on. The ancient Egyptians placed murals in their tombs; they were found in Pompeii before Mt. Vesuvius blew her top; and Michelangelo undoubtedly got a kink in his neck from daubing away at the ceiling of the Sistine Chapel. Peggy and I have even found some very interesting UFO-like murals left behind by early Native Americans.

We found this Roman mural in a museum in Naples.

Today murals have become ubiquitous, if I may use that two-bit word, i.e. they are everywhere. Small towns use them to attract visitors and relate their history. Urban areas have found them great for freshening up blighted areas. And the best of graffiti artists are now paid big bucks to wield spray cans they once used for free— two steps ahead of the police.

Murals have a way of slipping into my blogs when I come across them. I appreciate the efforts of both major cities and small towns to support artists. I recently featured murals I found in Puerto Vallarta. Two other examples include one from the small coastal town of Bolinas and one featuring People’s Park in Berkeley. 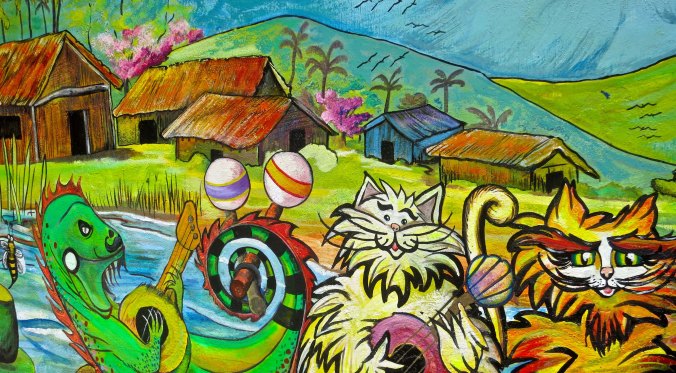 Mural Peggy and I found in Puerto Vallarta. We enjoyed its sense of humor.

A mural depicting how Bolinas would have looked in the 50s. Not much has changed. As for the guy in a brown suit carrying a blue surfboard… artistic license?

Murals have often been used to reflect local history and political protest.

Alien looking forms in an early Native American mural (pictograph) from Sego Canyon in eastern Utah north of I-70. I am going with UFO visitors.

Given the creative bent of Burning Man, it isn’t at all surprising to find that mural art thrives there. Each year, the Burning Man Organization, BMO, makes a long fence around the back side of the Center Camp Café available to artists. Other murals can be found throughout Black Rock City. I make a point of including works that strike my fancy in my annual Burning Man blogs. This year my choices ranged from Salvador Dali to pigs that fly— and other strange stuff. (Grin) Pigs that fly, BTW, have been a favorite of mine ever since I memorized this poem from Lewis Carol as an impressionable teenager:

“The time has come,” the Walrus said, ”To talk of many things:  Of shoes, and ships, and sealing-wax– Of cabbages and kings– And why the sea is boiling hot– And whether pigs have wings.”

Peggy’s mom, who is a retired high school English teacher and is now 95, doesn’t remember much, but she remembers this verse. We often recite it together. 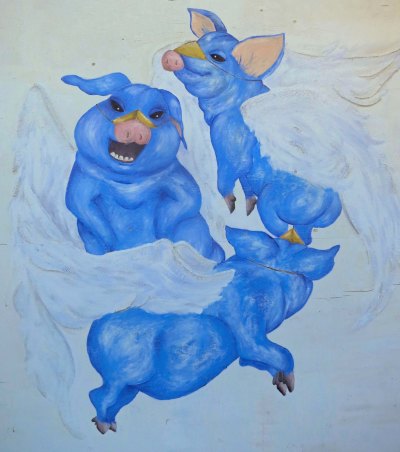 Three angelic flying pigs. I think the nose masks are there to deal with the dust storms of Burning Man.

A not so angelic Salvador Dali and his message. 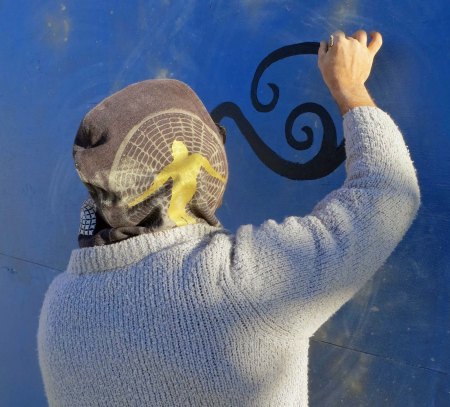 Arriving early at Burning Man in 2015, I was able to watch a number of mural artists at work. 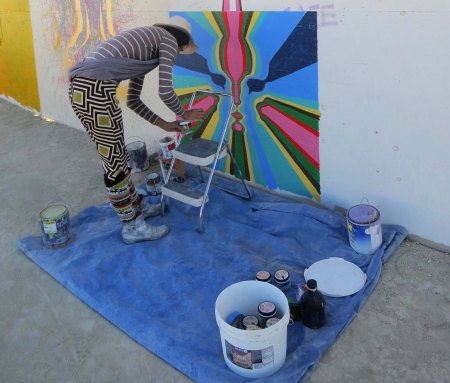 A view of one of the walls featuring a number of artists.

These clowns fit into the Burning Man theme of Carnival.

A bear riding a unicycle while juggling flaming bottles— another carnival theme. Apparently the world burns as well, while the middle bottle urges people to have a nice day.

Want strange, this ‘BMO insider’ mural qualifies. Check out the statue of Bliss dancing with Homer Simpson on the hat. El Pulpo Mechanico lurks in the background. 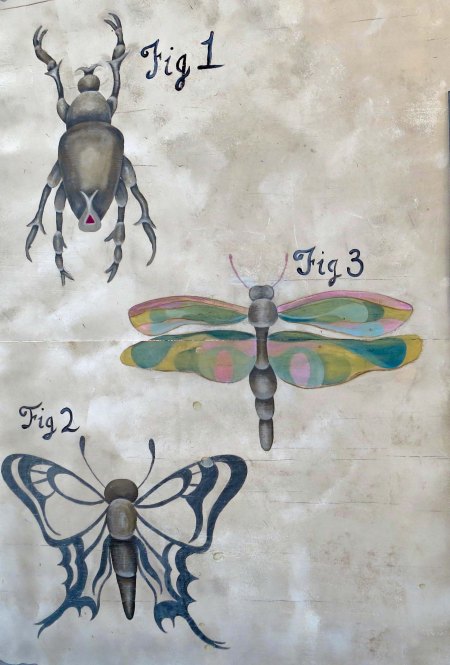 Handsome bugs. Fig 4, not seen here, was a mirror. Burners were invited to join the collection.

Let’s have a party. The two in front are playing their noses like flutes. And then there is the nose harp… 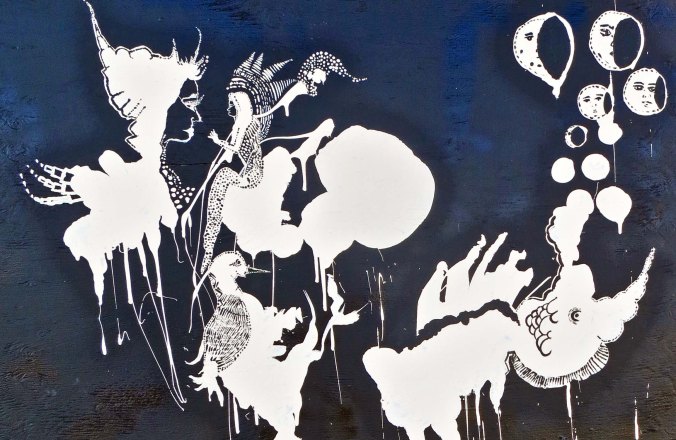 A study in black and white. Check out the details. 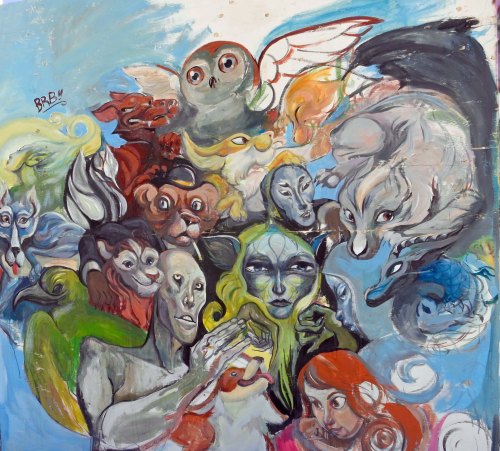 I’ll conclude with this version of what I view as the peaceable kingdom. Whether the artist saw it that way…

NEXT BLOG: A strange cathedral, Susan Sarandon, and the ashes of Timothy Leary.