One of my favorite thatched roof homes found while wandering streets away from the village centers.

Yes, the gardens were beautiful, and the tour allowed us to see a wonderful variety of them from one acre to 5000 acres. My favorite time, however, was wandering the villages in the Cotswolds. Here we had free time to enjoy a lunch and roam at will. The challenge: we only had two hours! Jane and I found the visitors’ centers, gathered maps, asked about recommended walking paths and highlights, and hit the road running— or at least walking fast.

Of course it was not enough time to do justice to each village, but what I saw made me want to return. Following are the visual highlights and a few fun stories.

Our trip started with Highclere Castle, AKA Downton Abbey, a major destination on our tour before we headed to the Cotswolds. Even more fun for me, though, was the visit to Bampton, which is the village featured in Downton Abbey for the weddings, the shopping and general villages scenes. I loved the story that it was chosen not only for its atmosphere but also for the lack of street markings and signs, which made it easier to represent the early 1900s when the story takes place. It was interesting to compare how the village and church look on the TV series with how it looks in reality. I liked the reality; Bampton is a lovely, quaint town.

The Bampton chapel and cemetery was the site of the weddings featured in Downton Abbey.

This tree overlooking the Bampton graves captured my attention.

Taking a Bampton walk about. 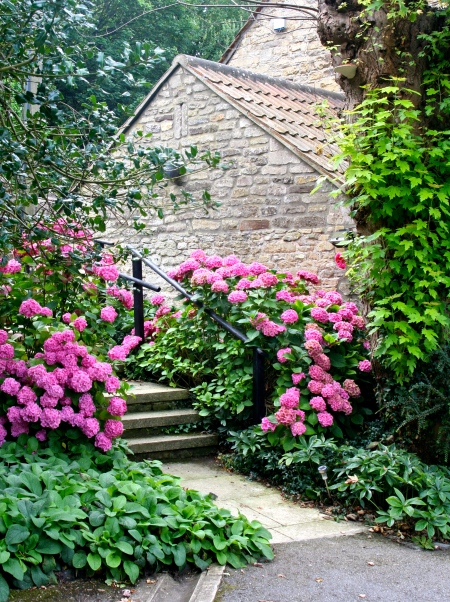 One has to admire the Cotswold stone hamlet with its gorgeous flowers.

Villages visited were Malmesbury, Chipping Campden, Cirencester, Tewkesbury, Misarden, and Ledbury. Malmesbury, the oldest inhabited town in England, and Tewkesbury, a medieval village with one of the largest parish churches in the country, will be featured for their abbeys in my final blog on the Cotswolds.

A village scene from Cirencester, known as the “Capital of the Cotswolds.”
The term “cester” means Roman fort indicating the origin of the village.

A scene captured during a walk about in Chipping Campden, a favorite village of mine, one to be revisited!

While in Chipping Campden, Jane and I noticed a children’s bookstore called A Festival of Books. Greeted by the owner, Emily Dunn, we asked about local children’s books (we both have grandmother duty, grin), and had a delightful surprise. Emily is the author of The Tale of the Cotswold Mice, a book written for Princess Charlotte and embraced by the royal family. Our luck continued! The illustrator and gold/silversmith, Aneata Boote, owns the shop next door. Not only did Aneata illustrate the book, but she also designed silver napkin rings (complete with the mice) to accompany the book. Naturally we bought a signed copy. As a retired elementary school principal, I highly recommend it for young children. Although the first printing sold out, it is being reprinted with a percentage of the profits going to a children’s art fund. Check out their website www.cotswoldmice.com 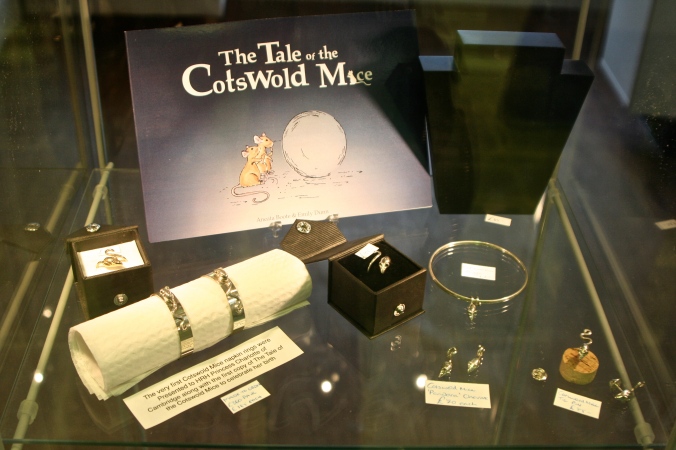 The Tale of the Cotswold Mice along with two napkin rings were presented to Princess Charlotte after her birth.

The author was Emily Dunn, the owner of bookstore, A Festival of Books, located in Chipping Campden. The silversmith and illustrator was Aneata Boote who owned the shop next door. Both were welcoming and charming!

While many of the homes and businesses were architectural eye candy, two features caught my eye over and over again: the famous honey-colored Cotswold stone and the thatched roof cottages. My sister had to drag me away from several of the structures in order to catch the bus on time. Just when I thought I had seen the best examples, I would walk another block and then— Wow!

How could I resist this rooftop view with its fairytale chimneys.

Then there were the markets. Once the centers of agriculture, wool, and silk spinning, the villages are making an economic come back with a refocus on farmers’ markets and crafts. I couldn’t resist the basket market.

Basket market in Cirencester, a city founded by the Romans.

The historical market in Ledbury, a photo taken from the bus as we left town.

The historical market in Chipping Campden.

While exploring the village of Misarden (previous garden blog), we discovered a home being renovated. The three young men working on the house noticed our interest and rushed out to invite us inside to admire their work. Their enthusiasm and humor were catching. One, the future tenant, had grown up in the area, and was looking forward to returning home. His plumbing skills were being put to good use in the renovation. Having once remodeled a colonial house, I appreciated what the young men had accomplished and how much work they still had to do.

These are the three men who welcomed us into the cottage they were renovating. They were such fun I promised them I would post their photo!

After leaving the renovation house I came across this tucked away garden.It was a good reminder to take the time to stop and look around, behind, beside, up, down…

Ledbury, the home of Elizabeth Barrett Browning (memories of English-lit days), is an ancient borough with centuries old timber-framed buildings. As we wandered the town, we stopped outside a building described as a 16th Century Painted House. Curious, we stepped inside only to discover the guide was closing things down. When we insisted we would only take two minutes to see the famous room, she hesitated, took a deep breath, and then led us upstairs. Our two minutes turned into 20. Apparently, a couple was preparing the walls for new paint when they discovered curious painted patterns under the layers of old paint they had removed. What they discovered dated back over 600 years. 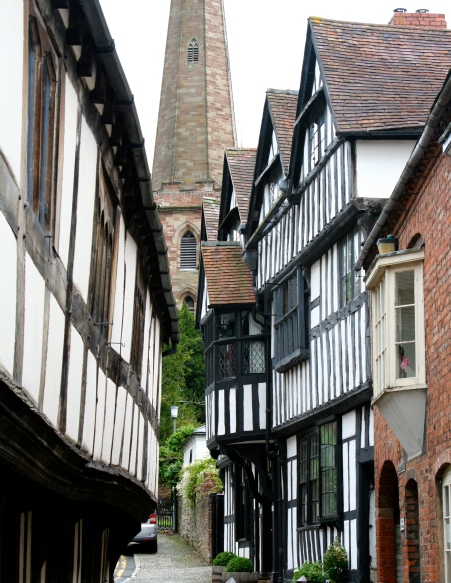 I loved the winding streets in Ledbury with their surprising views, such as the church.

Ledbury is known for its centuries old timber-framed buildings. The clock tower made a picturesque addition. 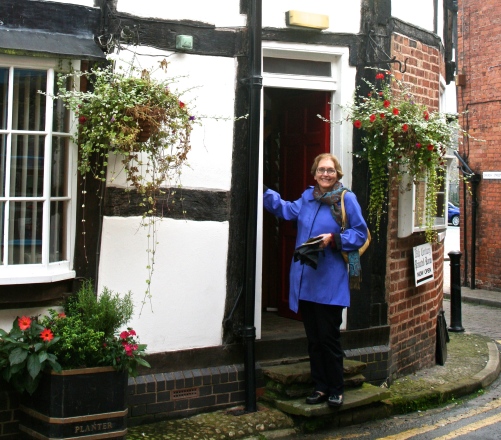 The 16th Century Painted House was tucked away in the narrow bend of the street. My sister Jane knocks at the door.

Trying to capture the 600 year old painted walls was challenging but worth the try!

I was captivated by what I saw in each village and would return, without hesitation, to continue my explorations. The history, beauty, care, friendly people, and, delicious food all make a visit worthwhile.

This doorknocker found in Chipping Campden seemed a fitting end to this blog. It was hard to resist knocking on this door. I will be back to try it out!