House Boats in Sausalito come in a wide range of shapes, colors and sizes.

Peggy and I are in Puerto Vallarta, Mexico. Since the beautiful sandy beaches and an occasional margarita have pulled Peggy away from her guest blogging, I decided to do a quick post on houseboats. Peggy may have soaked up enough sun to get back to blogging later this week. (grin)

As water people go, I’d place myself on the lower end of want-to. Even though I’ve travelled by sailboat, water taxi, gondola, fishing boat, raft, kayak, canoe and cruise ship, I prefer other means of transport— like walking, or bicycling, or driving, or flying. (The flying part, however, thanks to security hassles and the modern cattle car approach to air travel, has worked its way down the list over the years, while kayaking, which I’ve come to think of as walking or backpacking on water, has worked its way up.)

I have a confession to make here, though; I have always dreamed about living on a houseboat. I can’t really explain why. Somehow, it seems romantic. Maybe it appeals to the nascent hippie in me. My introduction to these floating fantasies was in Sausalito during the late 60s. I’d wandered into the town on a whim and there they were: beckoning. I was a responsible adult at the time, however, or at least trying to be. I had a wife, a job, an apartment, and a large basset hound named Socrates who drooled a lot. How much more responsible can you get? (Yeah, I know, have babies who drool a lot.) Anyway, I banished the thought of living on a houseboat and returned to my exciting life in Sacramento.

On my August trip up the Northern California coast, I learned that Don McCoy had helped establish Sausalito’s houseboat community in the mid-60s before he had tuned in and dropped out to found the Chosen Family commune at Olompali. This fact led me to drive thirty minutes south down 101 from Novato to re-explore my lost youth.

Sausalito has changed almost beyond recognition. At least it seems that way to me. I spent most of my time dodging tourists. There were at least a million (slight exaggeration). I didn’t have time to look around when I drove through town for fear of running over one. But the houseboat community felt familiar. Each home had a unique personality, emphasized even more by art and plants surrounding it. If there were a major difference from the 60s, it was in who could afford them. The days of naked hippies joyfully cavorting on the decks had long since passed.

How you build your houseboat is only limited by your imagination. And, I might add, the size of your portfolio. 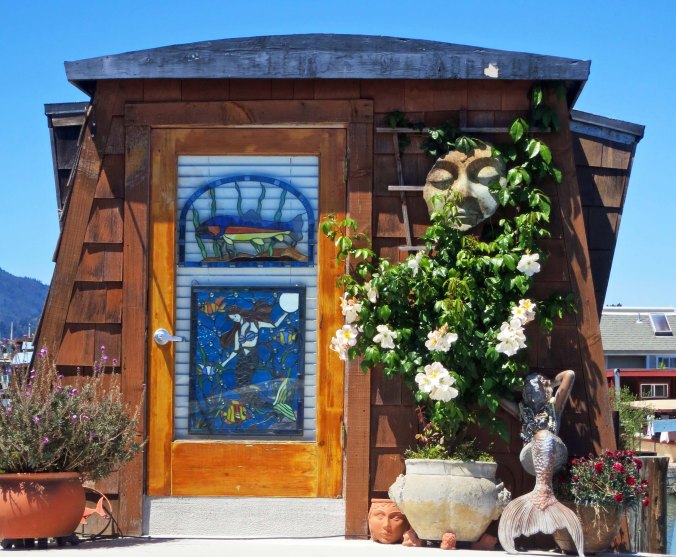 Ditto the above with art and plants.

This driftwood crocodile was lurking on a ledge.

And this guy popped out of a flower-pot.

The houseboat docks were decorated with flower gardens. The flower here seemed like it was lit from within.

Other areas also have their houseboat communities. Victoria, British Columbia is one. Peggy and I stopped by to check them out on our way home from a weeklong kayak tour on the north coast of Vancouver Island last year.

We discovered this little yellow jewel and its perfect reflection on the Island of Vancouver in Victoria, BC

Several Victoria, BC houseboats with downtown Victoria in the background.

We found a different kind of houseboat in England. They were six feet wide and up to sixty feet long. (Think of it this way: If we were configured in the same way, our noses would stretch out some 20 feet. Pinocchio would be jealous.) Three summers ago Peggy and I, along with Peggy’s sister Jane and her husband Jim, spent a week piloting one of these “narrowboats” along the Trent and Mercey Canals near Robin Hood’s old hangout. It was a kick— maneuvering our long boat, stopping at pubs and villages along the way, and pulling off at night to camp along the canal. This inexpensive, gypsy-like lifestyle has great appeal for some people and they’ve turned their narrow vessels into gaily painted, imaginatively named houseboats. Sign me up.

Here I am, piloting our 60 foot boat down the Trent and Mercey Canal. It’s a good thing we only travelled 3-4 miles per hour. 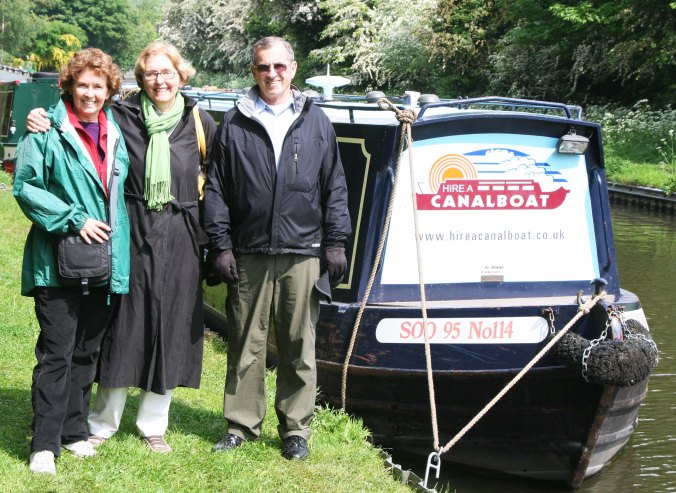 Our crew. Peggy and Jane operated the locks. Jim and I piloted the boat.

As this photo suggests, the Trent and Mercey Canal can be quite scenic. Low underpasses limit the height of the narrowboats.

How would you like to have a house named Belly Button? Fun names, plants and colorful paint jobs give narrowboats their personality.

A community of houseboats, Trent and Mercey Canal style. They could be gone the next day. 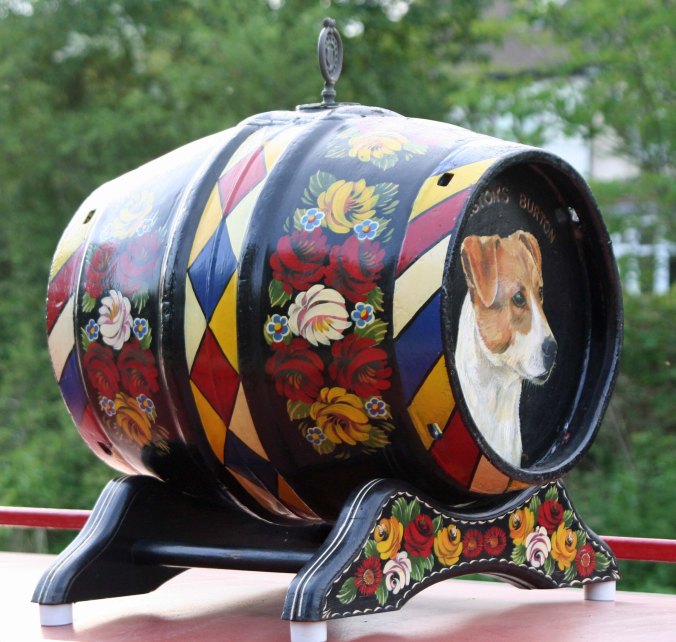 We spotted this water cask with its realistic portrayal of a dog on top of a narrowboat.

Next to the boat, sitting on the owner’s lap, was the dog.

NEXT BLOG: Peggy will post her blog on the small towns of Cotswold, England.

24 thoughts on “My Fantasy: Living on a House Boat”