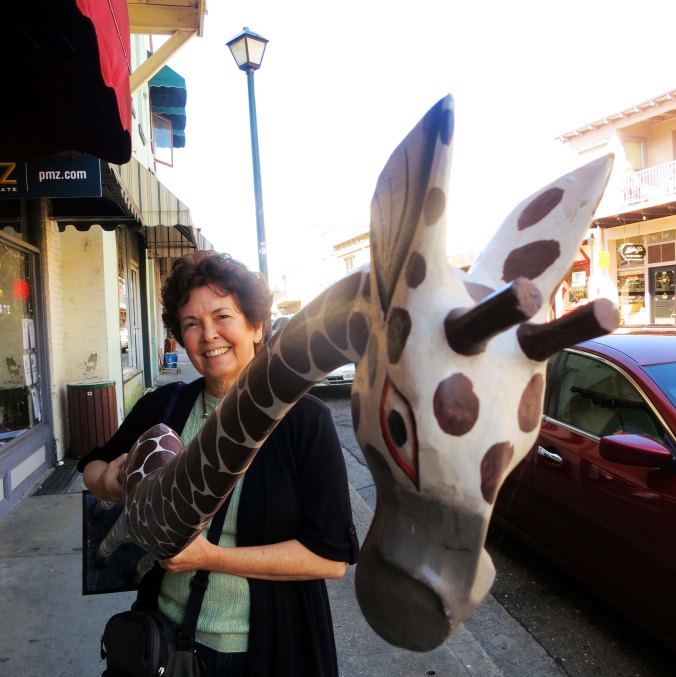 Peggy fell in love with this balsa wood giraffe we found in Jackson, California. So the giraffe came home with us. Little did we think it would have a taste for petunias.

And here I thought our deer herd with its greedy appetite was bad. At least they couldn’t reach our hanging plants. It may be our imagination, but it seems that the wooden giraffe we bought in Jackson, California is poaching on Peggy’s petunias! We pretended to drive up the road and then I snuck back with the camera to see what the long-necked marauder was up to. 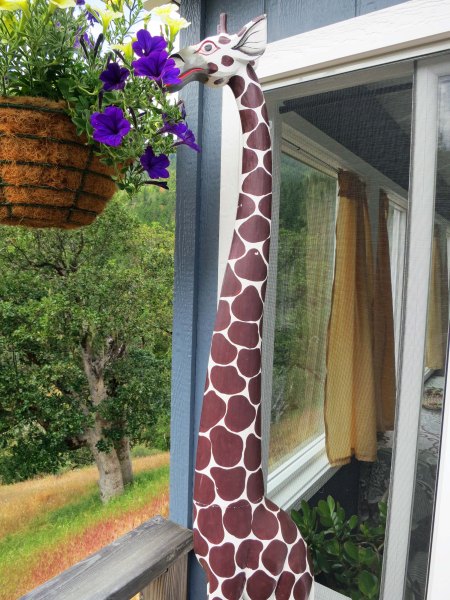 Aha! He was eating Peggy’s hanging petunias that the deer couldn’t reach. 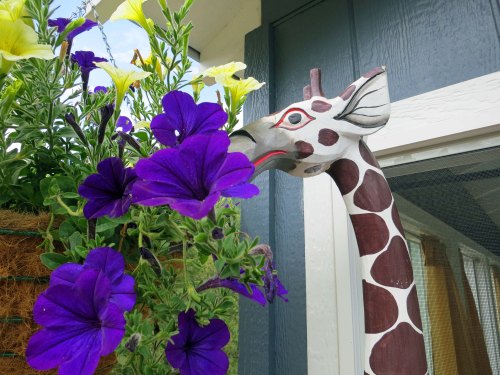 I caught the culprit purple lipped. 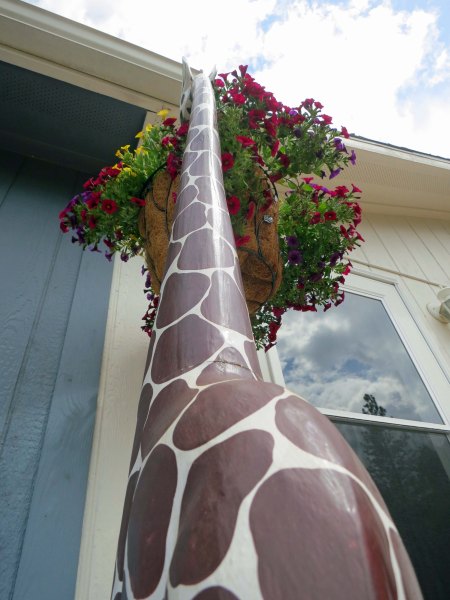 And apparently he was helping himself to all of our other hanging plants. 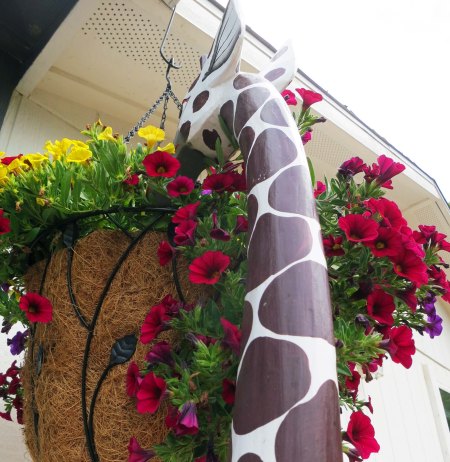 He was as much a glutton as the deer were. 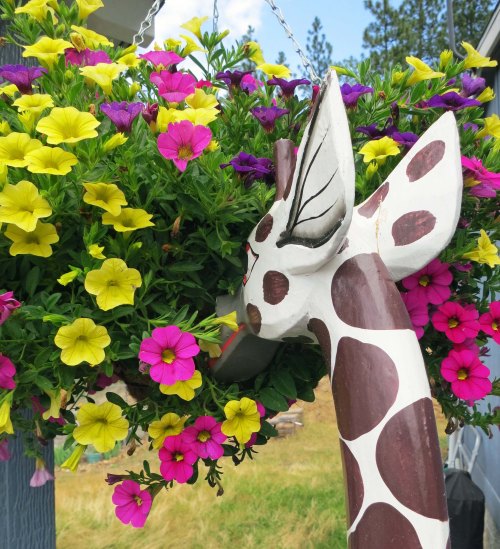 There was no stopping him!

I confronted the giraffe with the photos. “I was not eating Peggy’s potted posies,” the giraffe replied indignantly. “I was sniffing them.” Yeah, right.

Jackson, California is an old gold rush town located on Historic Route 49 in the California foothills of the Sierra Nevada Mountains. It’s about 30 miles away from where I was raised in another old gold rush town, Diamond Springs. Highway 49, with its logging trucks and cattle drives, fronted our property. Jackson was a long ways off. I’ve driven back and forth across the country a lot more times that our family visited Jackson when I was growing up— seriously.

We also found other wonderful creatures in Jackson on our March visit including a frog, a Hindu monkey king, a topless hula dancer, and a wildebeest. Fortunately we didn’t bring any of them home even though I lobbied for the hula dancer. 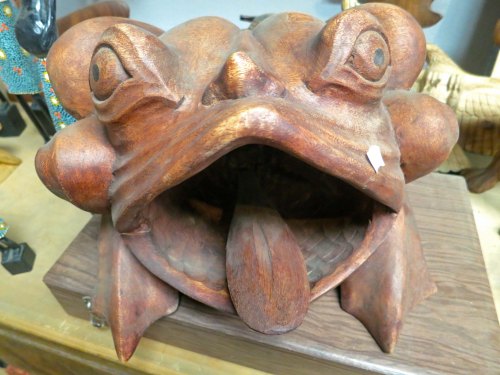 We found this marvelous frog at the same shop we found the giraffe, Richard and Sherry’s Collectables.   Were you ever told by your mother, “close your mouth or you’ll catch a fly.” Now you know where that come from. 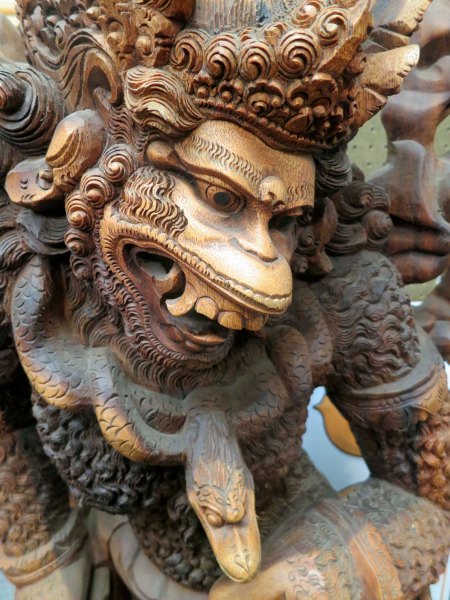 I was also impressed with this Monkey King with his pet snake. I assume he is Hanuman from the Ramayana. 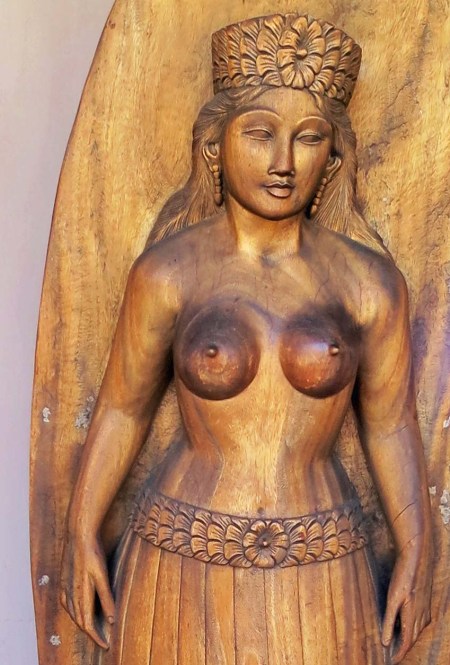 I remembered this, um, hula princess and her surf board from another visit to Jackson. She hangs out, so to speak, on main street and is kind of hard to forget. 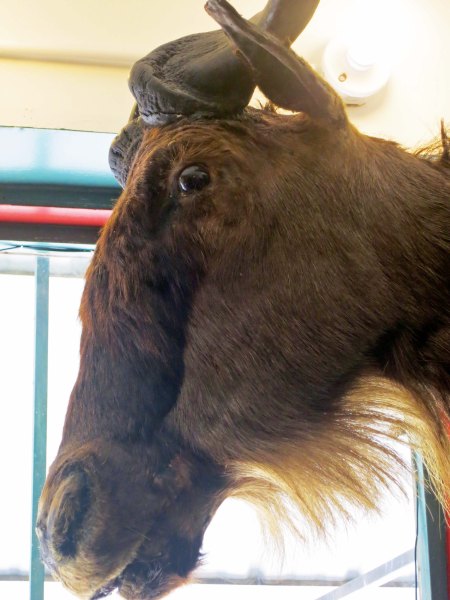 Wilbur the Wildebeest lives in a book store. 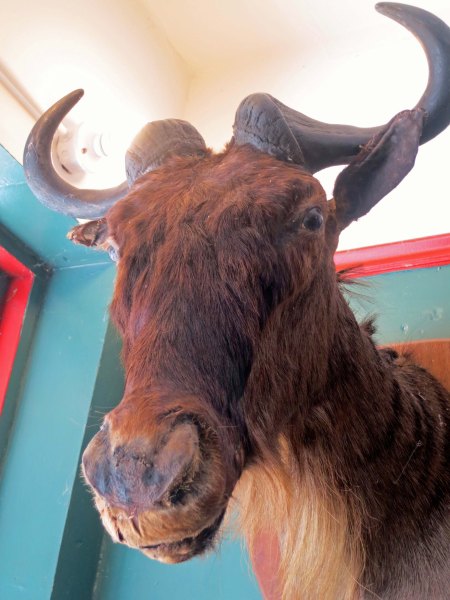 Apparently he has lived there a while.

Wilbur the Wildebeest lived in the Hein and Company Bookstore along with a cat, strange masks, columns of books, and a number of other unusual items. It may be the most interesting used bookstore I’ve ever been in. Be sure to put it on your itinerary if you visit Jackson. 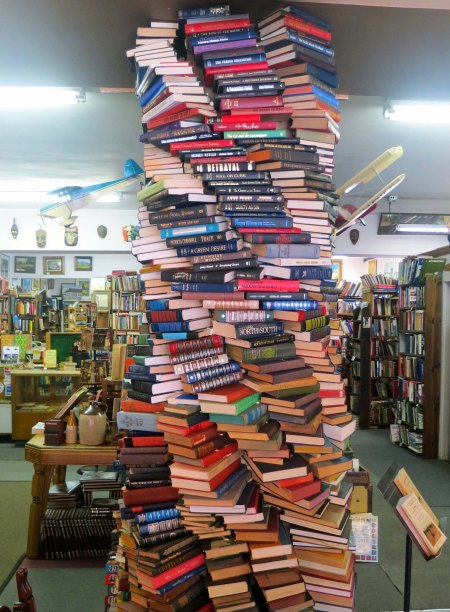 In addition to Wilbur, the Hein and Co Bookstore in Jackson is packed full of used books and numerous unusual/interesting items. Or do I mean weird? 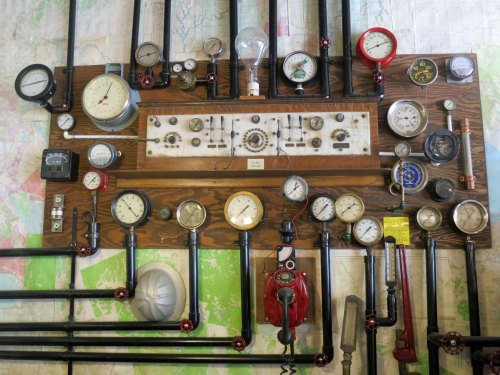 Such as this en-gage-ing collection 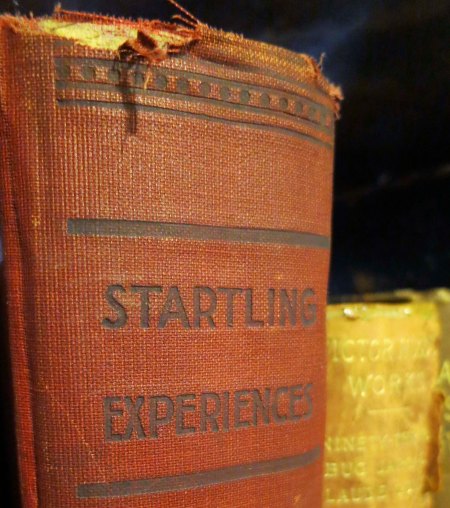 Who knows what you might find around the next corner? 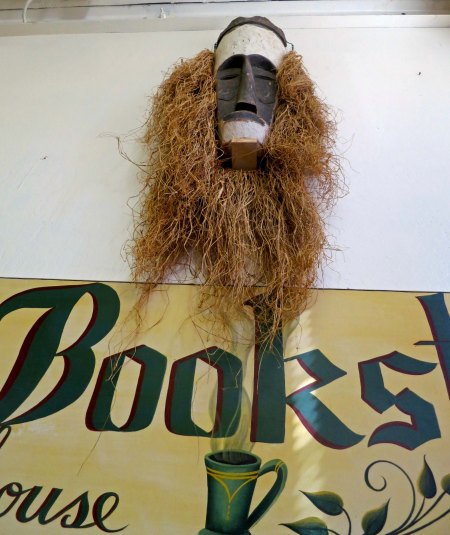 Certainly made me want to go upstairs and check out books… 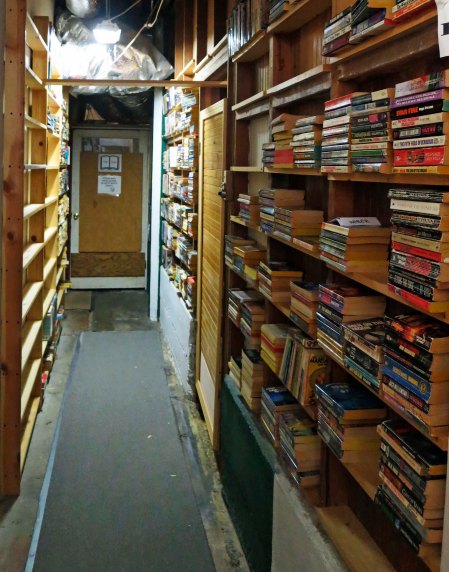 Where we found a virtual maze of book shelves and long corridors with mysterious doors and signs. I couldn’t resist walking down to the door to read the sign. 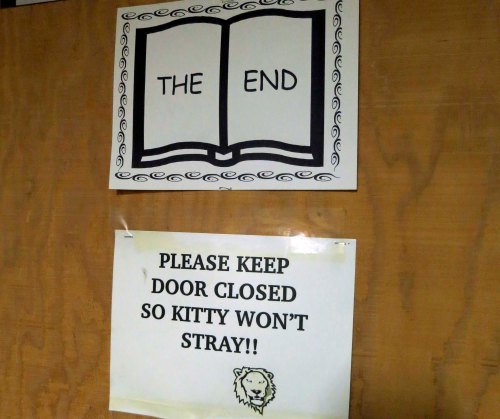 And found the end. Wouldn’t you be slightly tempted to open the door and meet kitty? 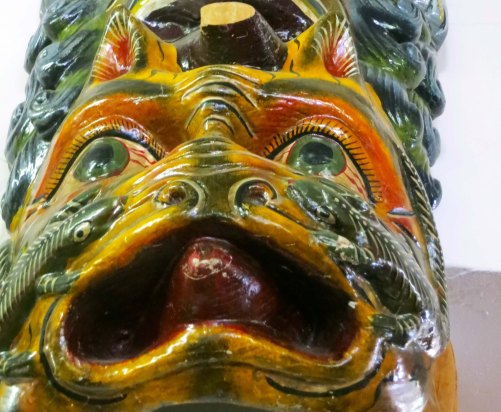 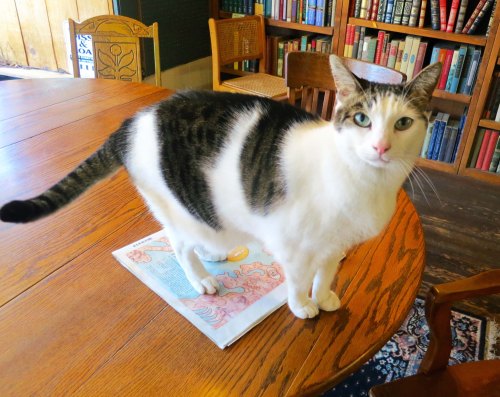 No, this was kitty. Many good bookstores have one.

Our visit to the town also included a walk up and down the main street and dinner at the National Hotel, which also dates back to gold rush times. Ladies of the evening made liberal use of the hotel in its early days. They say you can still hear their ghosts giggling at night. Black Bart, the infamous gentleman bandit who robbed stages on foot (he hated horses) and occasionally left behind a poem, reputedly stayed here. As did Mark Twain, Chester Garfield, Herbert Hoover, and John Wayne. Wayne lost $43,000 in a 1933 game of poker at the hotel. His check bounced and the local sheriff hunted him down and made him pay in cash.

A look up main street, Jackson. 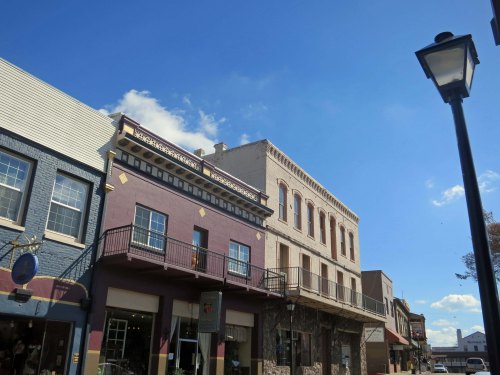 The community has done a great job of renovating and maintaining its historic buildings. 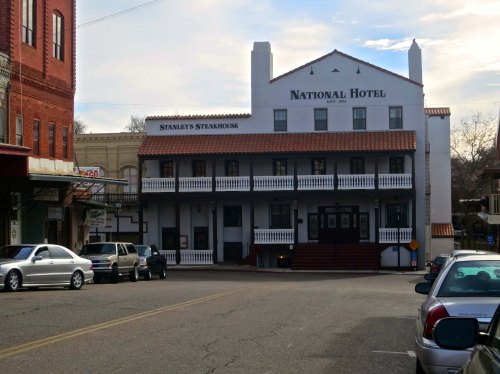 The National Hotel that has entertained every one from US Presidents, to outlaws, to movie stars— and possibly ghosts.

We finished off our visit to the Jackson area by checking out several local wineries. I was looking for wine to feature at my book-signing event in Sacramento. By the end of the day, they all tasted pretty good. And no, I wasn’t driving. 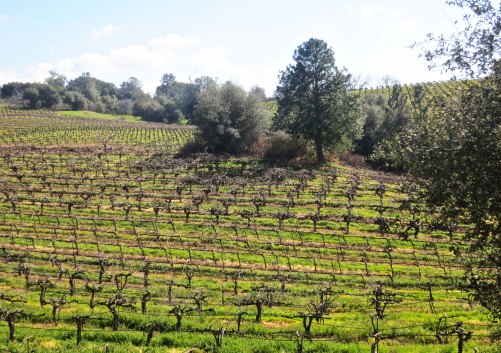 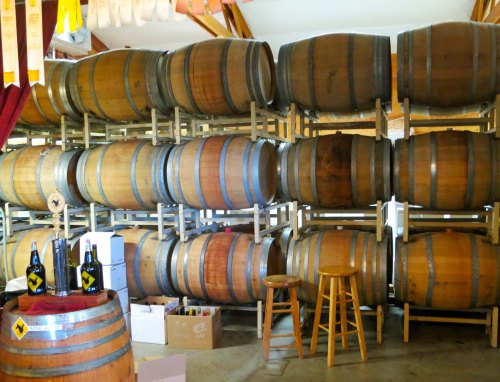 We visited several wineries looking for wine to use at my book-signing in Sacramento. 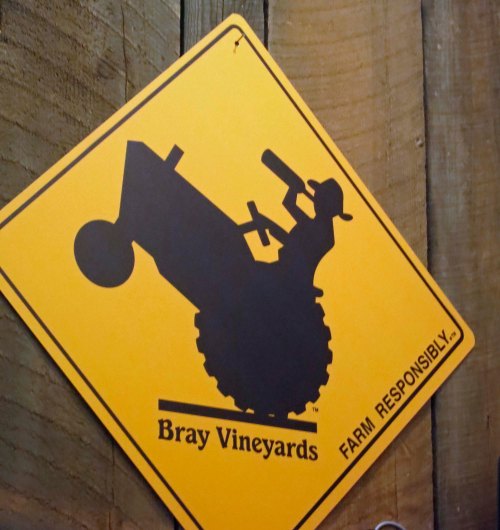 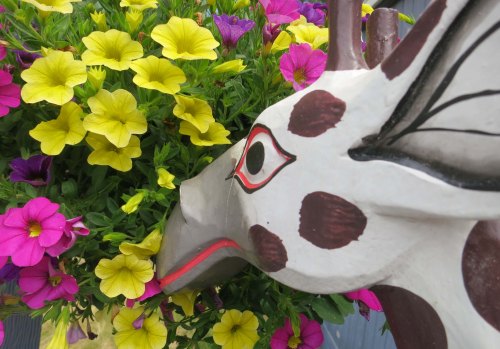 I’ll conclude with a final photo of the giraffe munching flowers. Guilty.

30 thoughts on “We Visited Jackson, California and Bought a Giraffe. Help!”