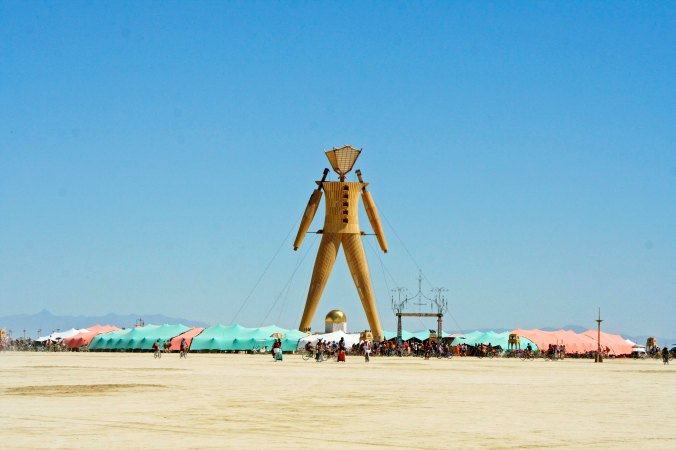 The Man at Burning Man dominates the Playa and serves as a landmark for lost Burners.

I’ve now been to Burning Man for ten years starting in 2004 and will be going again in 2015— assuming I get two tickets and a vehicle pass. (I missed 2011.) In preparation for this year, I have been doing a top ten series. Today I am going to feature two structures that epitomize Burning Man: The Man and the Temple.

Series 7: The Man and the Temple

If the Man reflects the history and continuity of Burning Man, the Temple reflects its spirit. The vast majority of Burners visit each of these large structures at least once during their week at Black Rock City. The Man dominates the Playa and provides a familiar landmark for both new and returning participants. Its roots date back to 1986 when Larry Harvey and a few friends burned the first Man on Baker Beach in San Francisco.

The Temple, a more recent creation, dates back to 2000 and can change dramatically each year in its appearance. Thousands of Burners leave messages on its walls, primarily saying goodbye to loved ones who have passed on.

Both the Man and the Temple are destined to be burned at the end of the week, the Man on Saturday night and the Temple on Sunday night. I will cover both of these events in my next blog.

Peggy, Tom Lovering, Beth Lovering, Don Green, Ken Lake and I took the following photos. My selection is designed to present an overview. 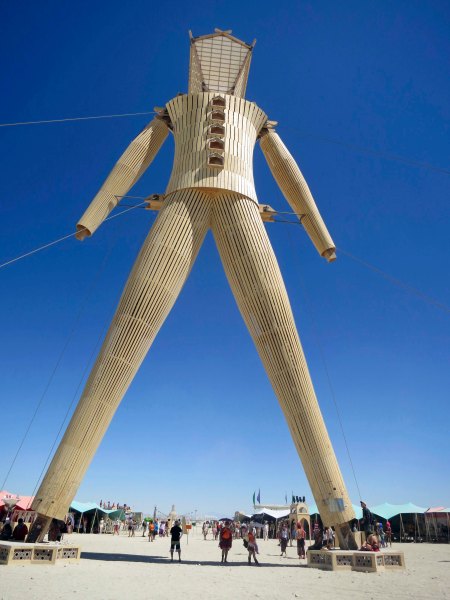 The Man’s normal skeletal look took on a new shape in 2014, like he had donned clothes.

The Man’s more skeletal look, which is how he has looked as long as I have been going to Burning Man. I assume that the nine foot version that Harvey burned in San Francisco resembled this guy. 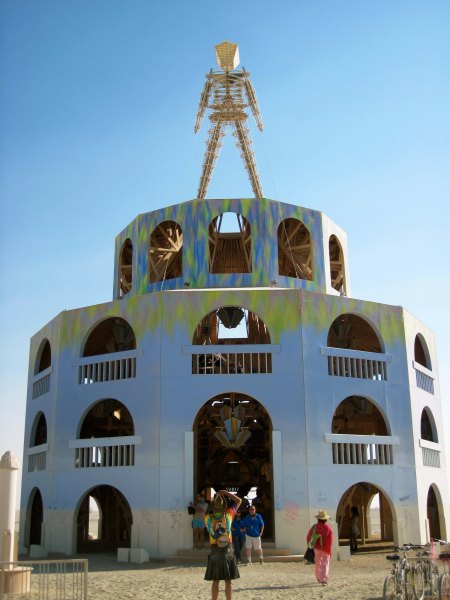 What has changed about the Man each year has been his base.

One year, he was perched on a flying saucer. The bases are designed for exploration— both outward and inward. This year’s base included a slide exit. It was fast. I went flying at the end.

I am not sure how to describe this base. Thorny, perhaps.

The temples at Burning Man are unique and quite beautiful.

Dawn brought a number of Burners to this temple.

This temple resembled a sand dune.

One of the first temples I saw at Burning Man.

And finally, a temple in the shape of a pyramid. NEXT BLOG: The Man, Temple, and other things burn.