The Burning Man festival, which takes place each year around Labor Day in the remote Black Rock Desert of Northern Nevada, has become a Bucket List event for thousands of people.

Peggy and I have our 2013 Burning Man tickets!

I  dutifully checked in a week early, received my authorization code, and then jumped on the Net when Burning Man opened its general sale of 40,000 tickets. I was put in the queue line. I would have my opportunity to shell out $720 for two tickets (two are all you are allowed to buy) when my number came up… if there were any tickets left. Burning Man made it clear; there were no guarantees. Everything was on a “first come first serve” basis.

I was worried. Three days earlier I had upgraded my Hugh’s Satellite Internet Service. (Peggy and I live out in the woods beyond the reach of normal Internet.) Apparently the upgrade impacted my ability to get on AOL where I had stored my authorization code, a fact I learned 10 minutes before the sale started. Forty minutes later I had worked my way around the problem. Was I too late?

Three hours… that’s how long I waited in the queue, and I am not good at waiting. I twiddled my thumbs, read the newspaper (yes, they still exist), and read several chapters in a book by Nicholas Carr on how the Internet is shaping our brains. It’s making us less patient. Finally, I was allowed to buy my tickets. I figured I was probably number 39,998.

My friend Tom Lovering, AKA Adios at Burning Man, who had been warning me for days via phone and Email not to miss the sign-up, failed to get tickets. So it will be Craig’s list for him in August. Several hundred if not thousand people will have discovered by then they can’t go and will need to sell their tickets.

So was it worth the hassle? My response is a definite yes! Burning Man is a Bucket List kind of event. I been going since 2004 and it’s still on my bucket list. Every year is different. Burning Man is so big and so diverse, there are always new things to see and experience. Last year’s program, make that catalog, listed over a thousand different events… all free.

I will be blogging about various aspects of Burning Man every week or so over the next several months leading up to the event. I will also continue my series on Mediterranean Ports I visited a couple of months ago. This summer I will feature the trip up the Alaska Highway through Canada and the Yukon Territory to Alaska that Peggy and I are making. As always, there will be lots of photos.

Burners, as BM participants are called, watch in fascination as the Man burns in 2012. A mechanical steampunk octopus lurks in the background. 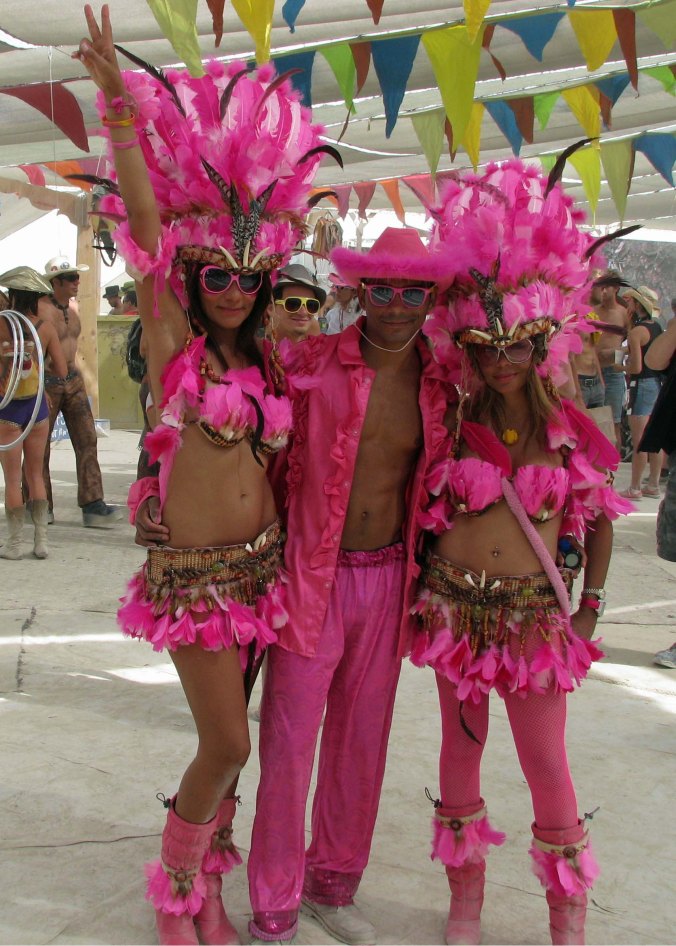 Elaborate costumes are an important part of the Burning Man experience. (Photo by Don Green.) 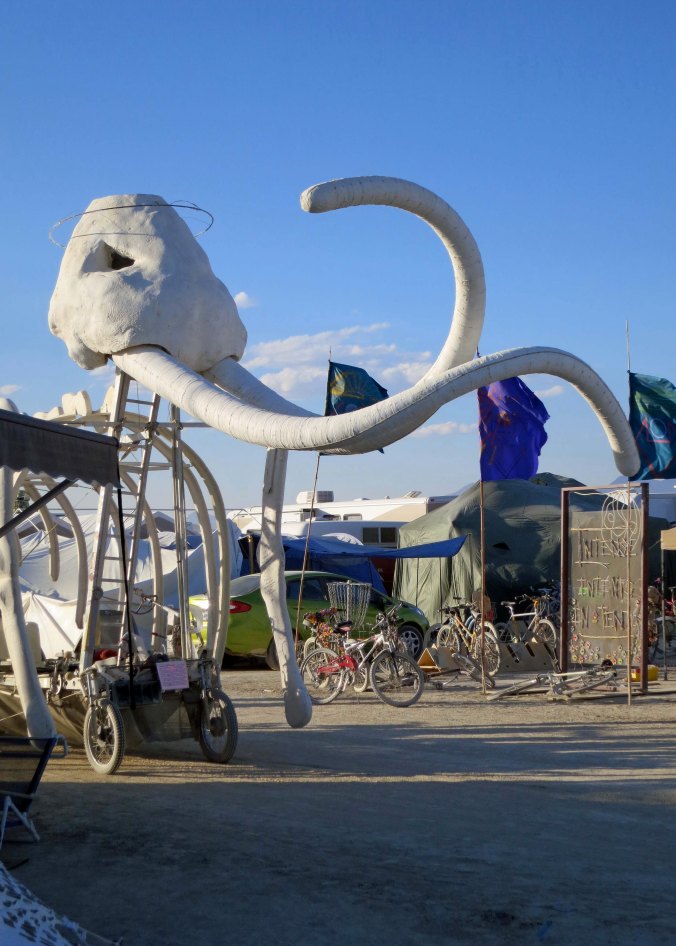 Hundreds of Mutant Vehicles, such as this Mammoth, make their way through camp and back and forth across the Playa. I took this photo from our camp.

Hundreds of works of art are displayed annually at Burning Man. This woman, who was kneeling, stood at least 15 feet tall. 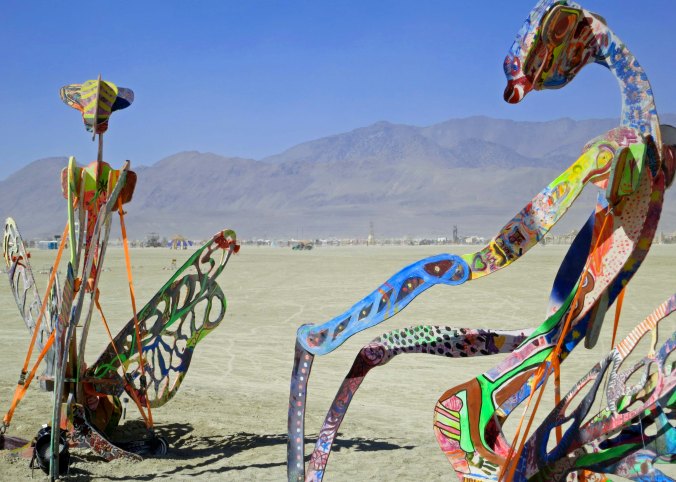 Art comes in all shapes and sizes. Here, a pair of colorful mantises face off far out in the Playa. 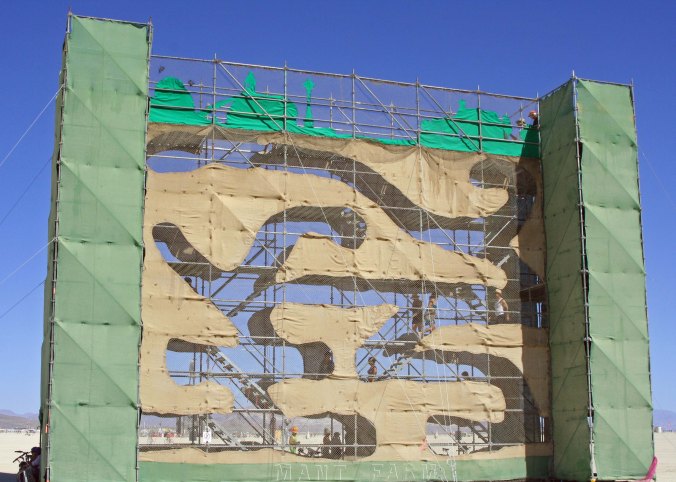 Much art is made to be interactive. Here, burners were invited to walk through the ant farm tunnels. The farm was at least 50 feet tall. Big Ants.

Regional art has been added to Burning Man over the last three years. This Texas Longhorn came from, no surprise, Texas. (Photo by Tom Lovering) 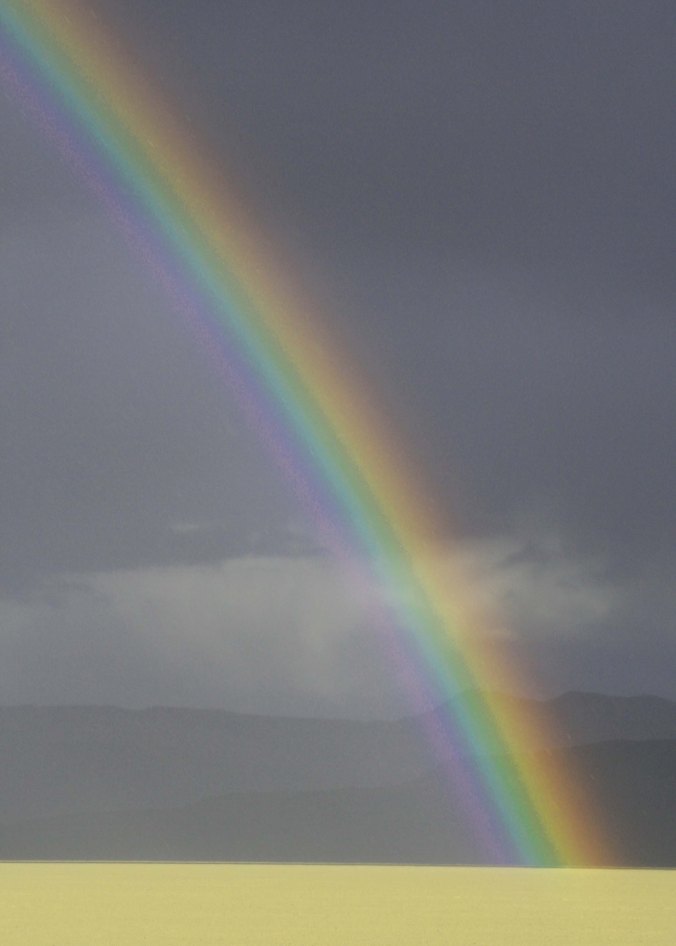 The Black Rock Desert can be quite beautiful, as this rainbow demonstrates.

Over the next few months, I’ll be blogging about various aspects of Burning Man. Join me. (Photo by Peggy Mekemson)

NEXT BLOG: The beautiful walled city of Dubrovnik on the coast of the Adriatic Sea in Croatia.

Next Burning Man blog: This year’s theme is Cargo Cult. What does it mean? I will use themes from other years as examples.