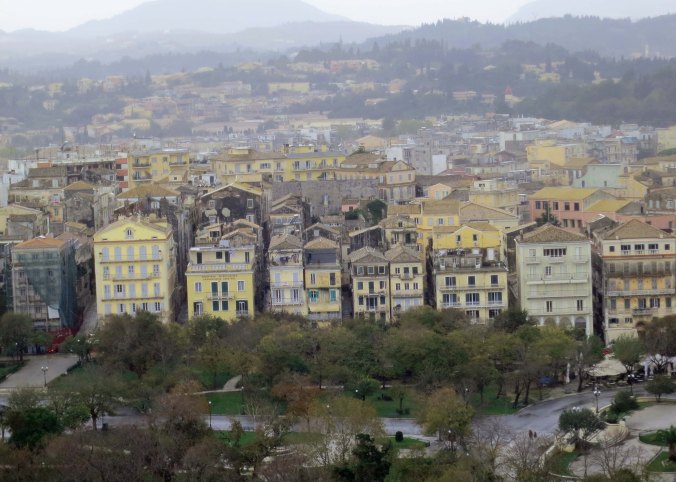 A view of Corfu on a misty day with its multi-colored buildings and tree covered hills. The city had a more European look than the other Greek islands we had visited. I took this photo looking down from the Old Fortress.

“The sea is high again today, with a thrilling flush of wind. In the midst of winter you can feel the inventions of spring.” Lawrence Durrell

“Yes, it’s an excellent book,” George Yohalem responded to my question. “Just don’t tell your mother I recommended it.”

George, along with his wife Betty, owned the Pioneer Bookstore in Placerville, California. It was a favorite hangout of mine during my senior year in high school and George had become something of a mentor, helping to guide my 17-year-old mind to a number of good books.  He and his wife had retired to the foothills of California after long careers in Hollywood where George had worked as a screenwriter/producer and Betty an actress.

The book I had picked up was “Justine” by Lawrence Durrell. The above quote is the first line in the book and Durrell is describing Corfu. He had lived there from 1935-40 and fallen in love with the island. “Justine” became my initial venture into serious literature and definitely my first venture into erotic literature… thus George’s caution. The book transfixed me, not so much by the sex (well, maybe a little) but by the sheer mastery of the language. I was picked up and dropped into Corfu and then Alexandria… the main setting for “Justine” and the other three books in the Alexandria Quartet. It was magic.

Durrell wasn’t the only author to find Corfu a touch exotic. Homer had the ship wrecked Odysseus land on the island during his long journey and Shakespeare used it for the setting of Prospero’s magical realm in The Tempest. In Corfu’s long history Corinthians, Romans, Venetians, French and English had occupied the island as a gateway to both the East and West. At one point, the feared pirate Barbarossa laid siege to Corfu and succeeded in enslaving a substantial portion of its population.

Corfu’s location in the Ionian Sea sets it apart from its Greek cousins Santorini and Mykonos in the Aegean Sea. We found no more sparkling white washed buildings perched on treeless terrain. Corfu is an island covered with over a million olive trees and its buildings are multi-hued with a well-lived-in look. Two massive forts serve as bookends for its main town, also known as Corfu. We wandered through its winding narrow streets, visited an Asian museum housed in a colonial British mansion, checked out a Greek Orthodox Church, and climbed the steep hill to the top of the Old Fortress overlooking the town. 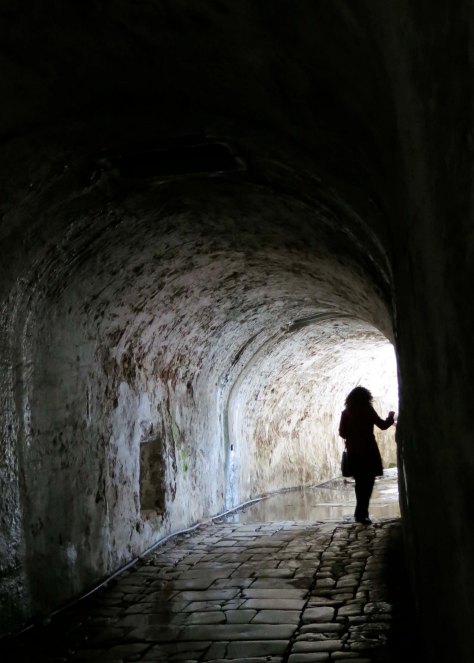 The most magical place for me in Corfu was the Old Fortress. Dating back to ancient times, the Venetians updated it in the Fourteenth Century. In this photo, Kathi Saage walks around a corner of one of the tunnels leading through the fort.

I loved how the fort seems to be an organic part of the hill. 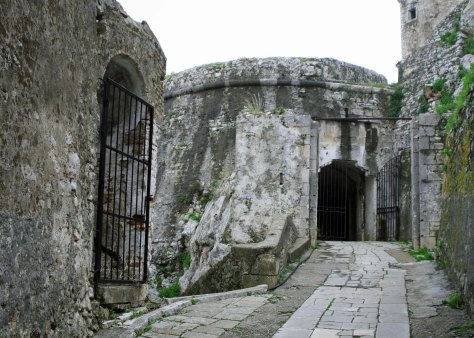 This photo and the next, both by Peggy, also capture the ancient feel of the Old Fortress on Corfu. 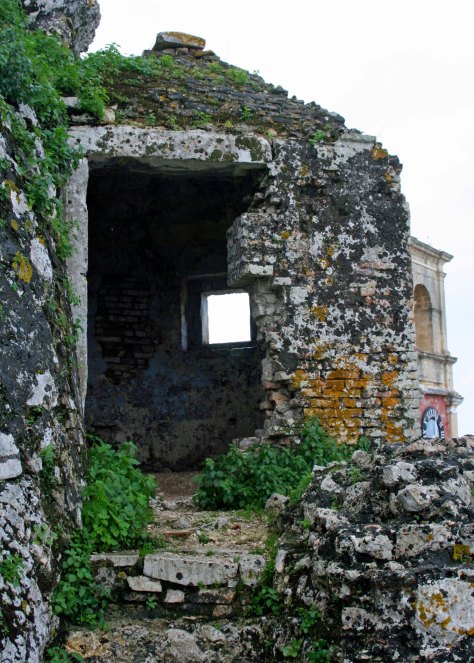 This building probably served as a gun placement in the fort. The clock tower peaks out on the right. (Photo by Peggy Mekemson)

The clock tower located on the Old Fortress of Corfu. It was a stormy day. 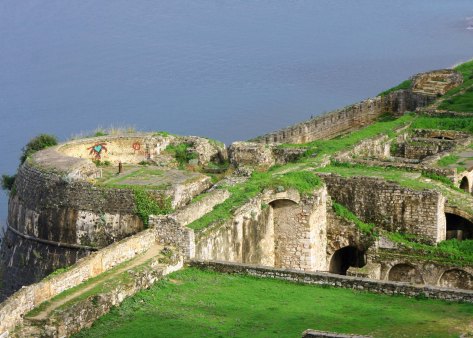 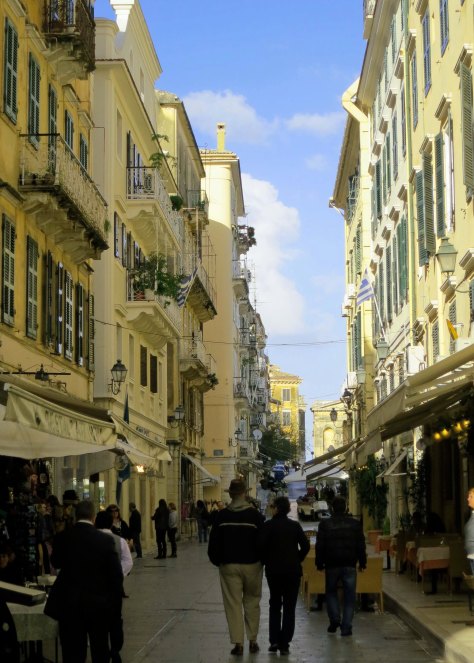 A Corfu street scene. Once again we enjoyed the narrow, car-free streets as we did time and again in Europe. Peggy’s brother John and his wife Frances served as my models.

Another view of Corfu buildings with their shutters and balconies. 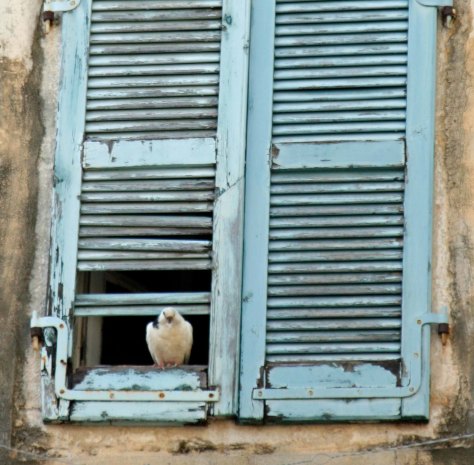 Peggy found this pigeon hanging out on the broken shutters of an abandoned building.

Lamp posts don’t get much more strange than the one we found outside of Corfu’s Asian Museum located in an old British mansion. Does it qualify as art, or just weird?

The Asian Museum, BTW, includes an excellent collection of art, as represented by this painting.

Part of the adventure in travel is experiencing new sites and cultures. This was a beautiful Greek Orthodox Church we wandered into. 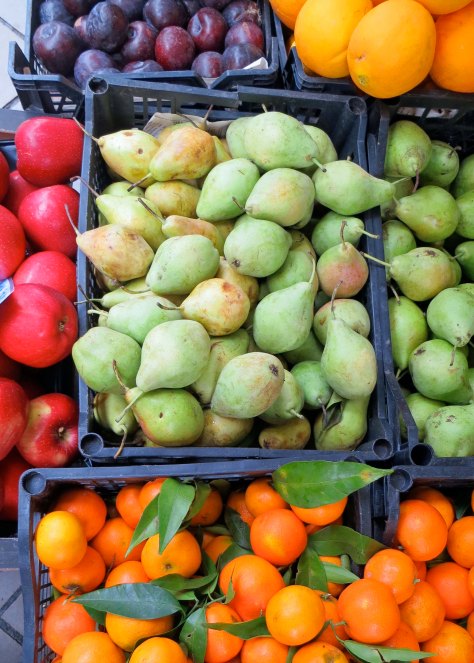 And animals… I caught this guy sleeping on the seat of a motor bike and catching some rays at the entrance to the Old Fortress on Corfu. It may be a new definition of contentment.

A final view of Corfu. This one captures our ship, the Crown Princess, in the background.

A BREAK… A few days ago I spent three hours on an Internet queue hoping to get two of the 40,000, 2013 Burning Man tickets made available to the general public.  I succeeded! Once again Peggy and I will be attending this unique event in the remote Nevada desert. In celebration, I will post some of my favorite Burning Man photos on my next blog. If you have been following me for a while, some of the photos will be familiar.

In the blog after, I will return to our exploration of the Mediterranean with one of my three favorite stops: Dubrovnik in Croatia. You won’t want to miss this beautiful walled city.

6 thoughts on “Corfu: Are We Still in Greece…? The Mediterranean Cruise”