“What a wonderful bird is the pelican, whose beak can hold more than his belly can.” Pelicans are my absolute favorite birds and I have never met a more impressive specimen than Petros of Mykonos.

One sight you are almost guaranteed to see when you visit the Greek island of Mykonos in the Aegean Sea is Petros, the Great White Pelican. He’s easy to locate. Look for a large flock of camera-pointing tourists.

I googled Petros to see what I could discover about this magnificent bird. Sorting through the various “facts” was challenging. Here’s what I learned. In 1954 or 1955 or 1958 a fisherman found a wounded or exhausted Pelican and nursed it back to health. He then freed the bird so it would return to his wild ways of summering in Europe and wintering in Africa. The pelican, however, had discovered that life in Mykonos was quite sweet. Why spend all that energy flying thousands of miles, swooping over the waves, and diving for dinner when he could waddle around town and have people toss him fish? He decided to stay.

The Mykonosians fell in love with the big bird and named him Petros after St. Peter or maybe after Petros, a popular World War II Greek hero. Once, a neighboring Island stole him. It almost caused a war. In 1986… or there about, he was run over by a car. The driver was lynched. (Actually the driver wasn’t lynched. I just made that up. But look at it my way. With all of the misinformation floating around on the Web about Petros, how could one more piece hurt?) Anyway, Jackie Kennedy Onassis felt for the grieving Island and found them a new pelican that was promptly named Petros. Or, more likely, Jackie contributed a mate for Petros before he was run over and the Hamburg Zoo in Germany provided the replacement (or two, or three).

Whatever the truth about Petros, there is no doubt that the Mykonosians love their mascot, that he continues to enjoy his life of leisure, and that tourists flock to take his picture. In fact Petros has become a major tourist attraction in his half-century on Mykonos and a community that depends on tourism can never have enough tourist attractions. Petros is worth his weight in gold, or at least Hungarian Goose down.

Petros seemingly enjoys cool water dripping down onto his beak. 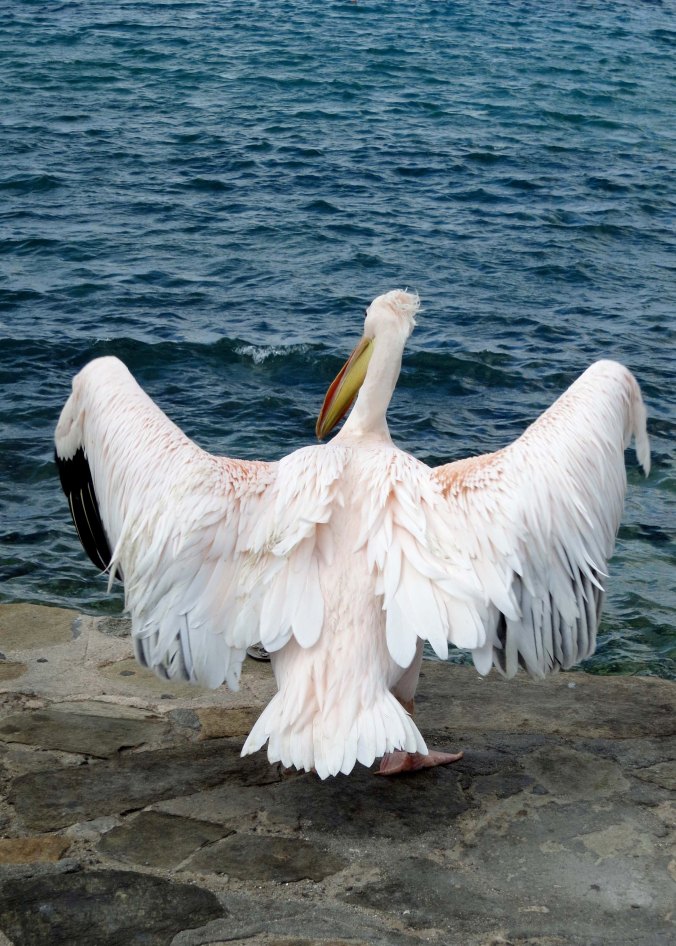 A final close up of Petros, the White Pelican of Mykonos. If you have enjoyed these photos of Petros, I would highly recommend that you check out the blog of my friend FeyGirl at  Serenity Spell out of Florida who is producing some of the most beautiful bird photography to be found on the Web..

NEXT BLOG: Continuing our exploration of Mykonos on our Mediterranean Cruise adventure, we get lost in the town’s confusing, narrow streets, find windmills, and discover a church to match the beautiful churches of Santorini.

9 thoughts on “Petros, the Magnificent Pelican of Mykonos… The Mediterranean Cruise”