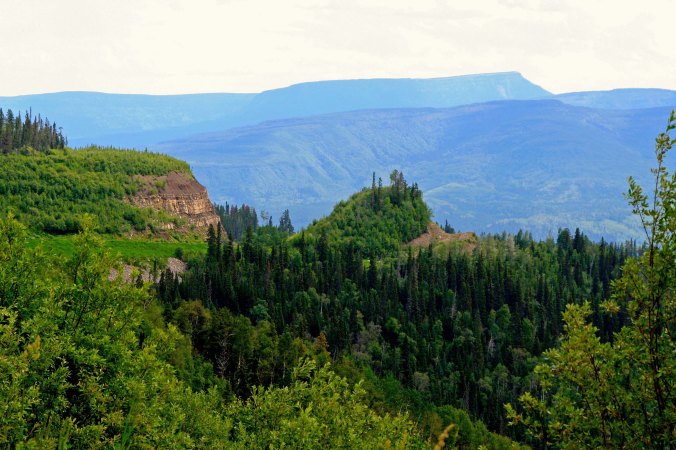 There is a much natural beauty along the Alaska Highway and a lot of wilderness— millions of square miles, as far as the eye can see.

The Alaska Highway, or the Alcan highway as it was known at the time, was a hurry up project, rarely if ever matched as an engineering feat. World War II was raging. The Japanese had bombed Pearl Harbor and were threatening to invade Alaska, which they did in 1942, landing on the outer most islands of the Aleutian Chain. The only way to counter the threat was to travel by ship through the North Pacific or fly in by air. The US and Canada came to a quick agreement: a 1700-mile road (2700 K) would be built between Dawson Creek BC and Delta Junction, Alaska. It was a colossal project.

Sub-zero freezing temperatures ruled during the winter and suffocating heat dominated in the summer. Along with the heat came hordes of mosquitos, black flies, no-see-ems and other biting, blood-sucking insects. Temperatures were so cold in the winter that fires would be lit under equipment to warm it up enough to operate. Muskeg sucked the same equipment down into the mud in the summer, sometimes swallowing it whole. 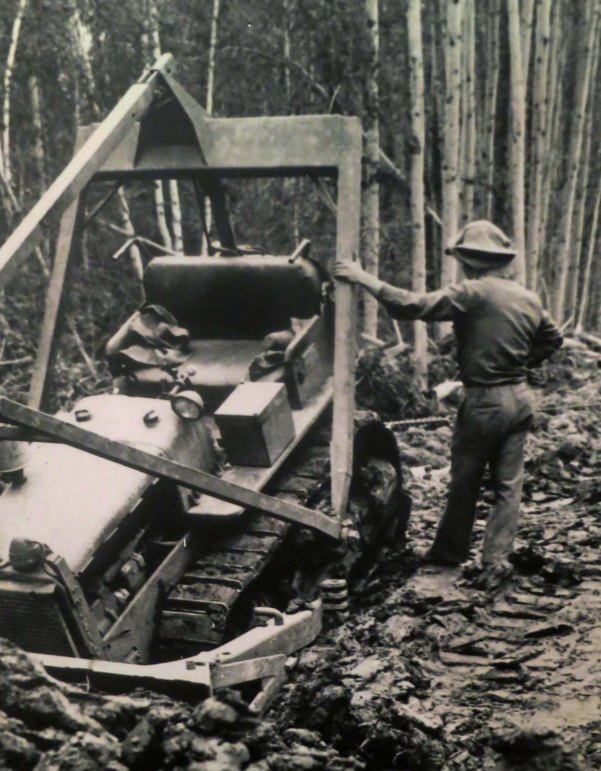 Bridges were made from logs. (Museum photo.) 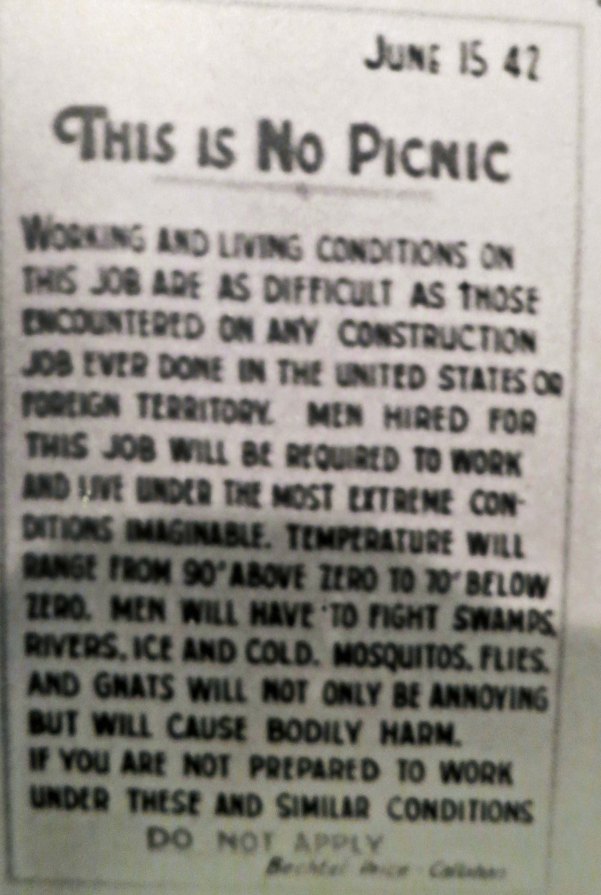 While not as clear as I would like, this recruitment notice is worth reading. They should have won a prize for ‘truth in advertising.’ (Museum photo.)

Lots of old equipment is also displayed along the highway.

Here I am standing on one of the old bulldozers.

With the threat of an imminent invasion, there was no time to consider the usual niceties of road building. Some 11,000 soldiers and engineers, 16,000 civilians, and 7000 pieces of equipment were thrown at the epic undertaking. Airplanes flew out daily to help plan routes, ‘on the fly’ so to speak, while the men struggled under almost impossible conditions. Starting on March 2nd, 1942, the project was completed on September 24th, some eight months later.

It was rough, oh yes it was rough— steep, muddy roads, log bridges, trees laid down across muskeg 15-feet deep— but it was usable. At $140 million, it was the most expensive construction project of World War II. 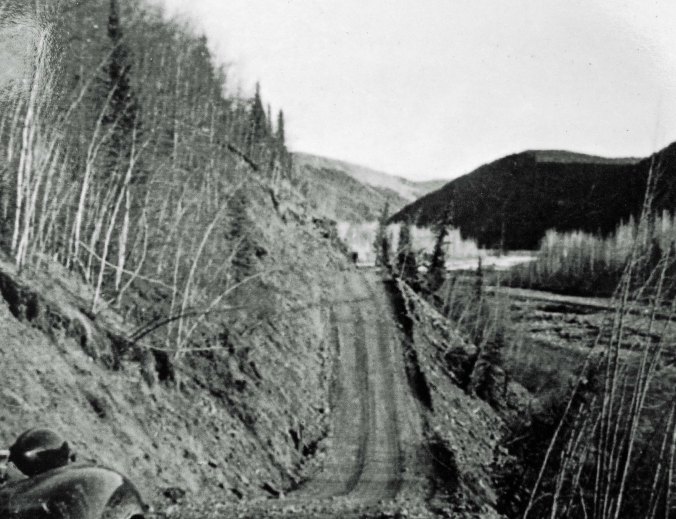 A view of the old road on its completion. (Museum photo.)

And how much of it looks today.

The highway can still be a bit of a challenge, but not so much that 30-40 foot RVs aren’t seen in substantial numbers travelling north on it. For the most part, the road is paved except for construction work, which can seem to go on forever. And it is shorter, by some 300 miles!

Today, I will take you over the first 400 miles from Dawson Creek to the uniquely named Toad River. The thing about the scenery along the Alaska Highway is that it is all impressive, and the farther north you go the more impressive it becomes!

Mountains and forests rule along the highway… 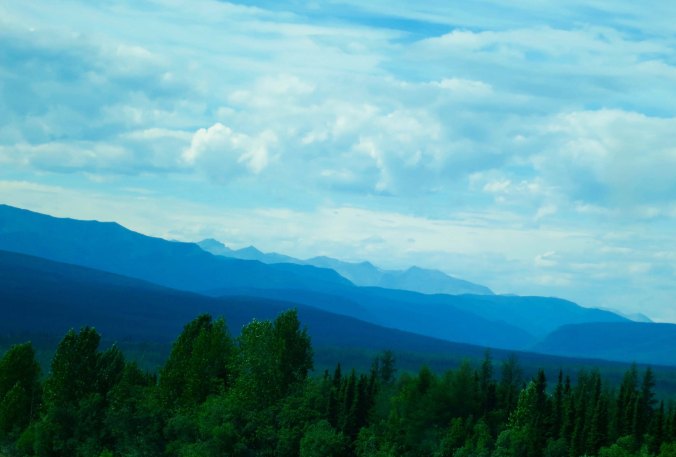 Mountains stretching off into the distance. 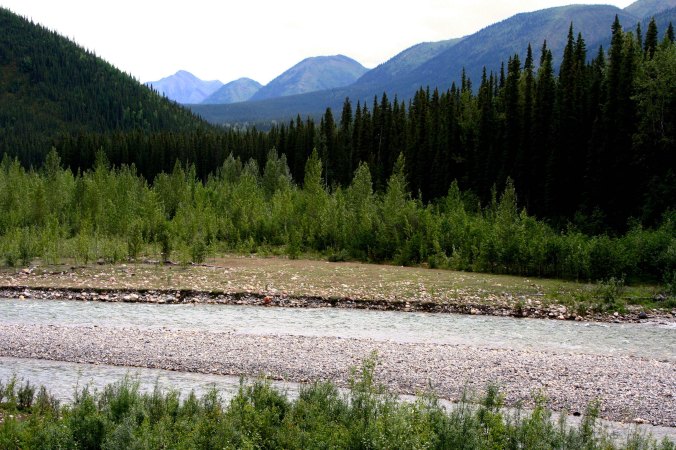 Between ranges the road follows rivers, all of which had to be crossed when building the highway.

This is the Sikanni Chief River. 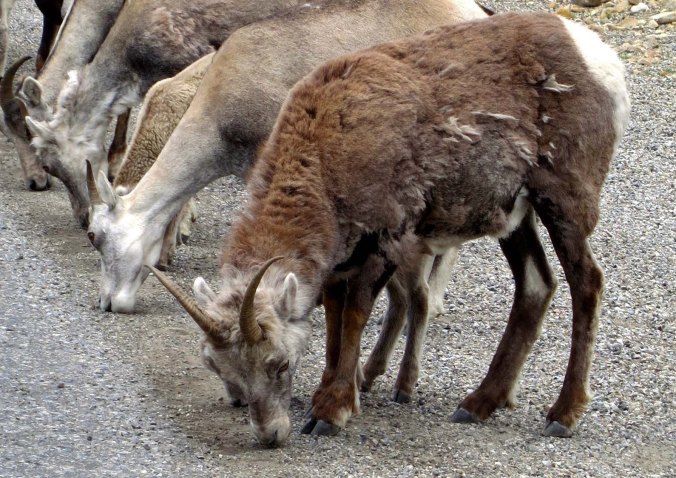 We were not disappointed. The sheep had come down the mountain to eat the salt that had been washed off the road from the previous winter.

They weren’t worried when we stopped, but they did check us out. Note the kids peeking out.

To say that they were cute…

Is a considerable understatement. 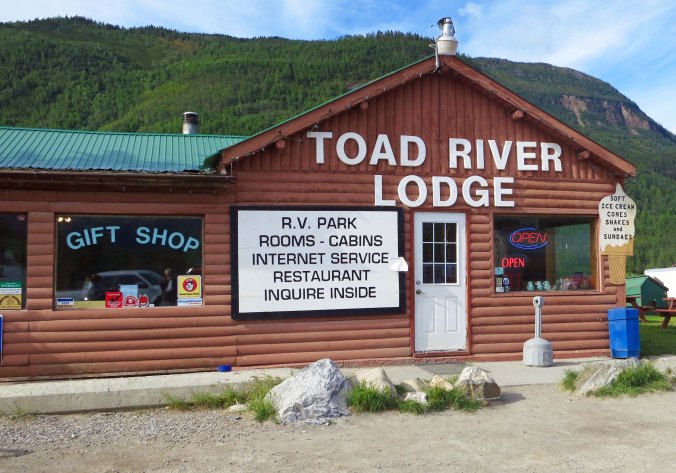 Not far up the road, we came to the Toad River Lodge, which is named after the Toad River. Roadhouses were common in the early days of the Alaska Highway and even up to the time when I first drove the road in 1986. It was hard to travel over more than a hundred miles a day on rough, unpaved roads. Many lodges are closed now, no longer needed.

The lodge was quite proud of its cap collection, some 7000 from all over the world. The name, so we were told, had derived from towed, not the warty frog. Before the Canadians and Americans had completed a bridge across the river in 1942, they had to be towed across it. So they named it the Towed River. Toad is much more creative.

This fellow was staring at us when we ate at the lodge.

We spent the night at lodge’s RV campground. This was the view from our campsite. It was obvious that beavers had been at work on building their own lodge. 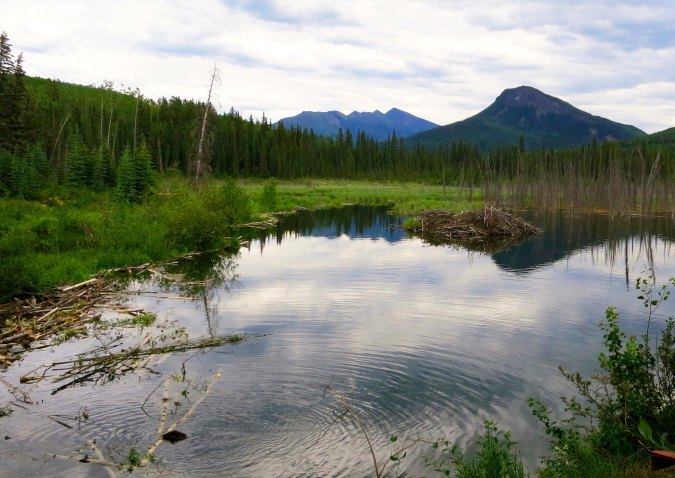 And we soon saw one of the lodge’s residents. Lower left. He/she was busy building a beaver dam to assure that their lodge continued to be prime, waterfront property.

A view of the dam, which was literally outside our door. The builders had certainly been ‘as busy as beavers.’

Beavers often work at night, so we were excited about having these chisel-toothed mammals continue their activity as we watched from a bench next to their lake.

While they worked, for the most part, bringing limbs in from across the lake…

This didn’t stop them from stopping for an occasional snack from their dam building material! That’s it for the day… Next Wednesday, we will continue our journey up the Alaska Highway.

FRIDAY’S POST: MisAdventures finds me playing in the woods when I was growing up, a quick ten-minute walk from my home. While it may not have been wilderness, it was wilderness to me.

MONDAY’S POST: Peggy and I continue our journey down the Colorado River through the Grand Canyon.

WEDNESDAY’S POST: We continue on our journey up the fabled Alaska Highway through Canada, reaching the Yukon Territory. A strikingly beautiful lake, big bison, and a sign forest of 70,000 signs are featured.