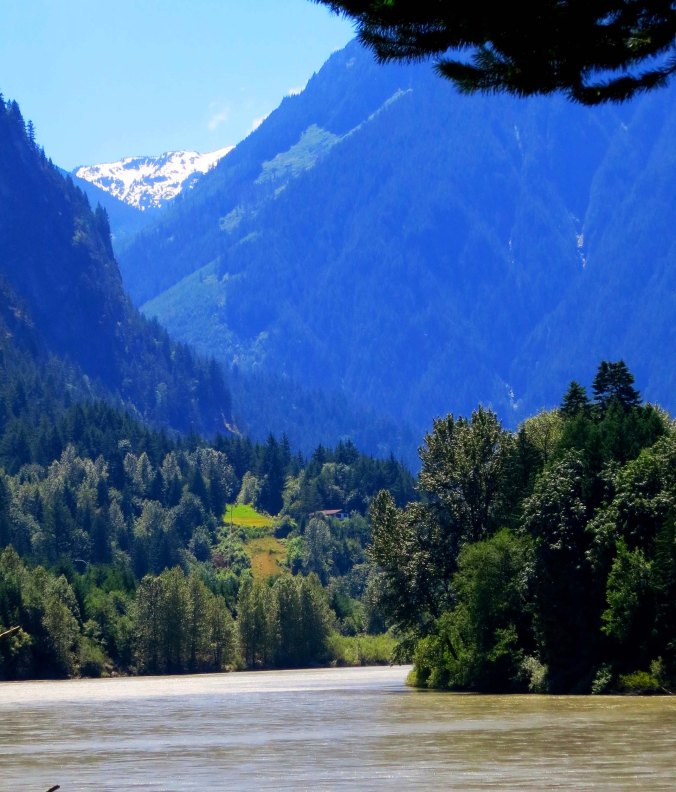 The small town of Hope in southern British Columbia features this view of the Fraser River.

Adventure travel and the 1400-mile Alaska Highway go together like biscuits and gravy. I’ve driven it five times, once by myself in 1986 when I left Alaska to return to California and two round trips with Peggy since. The last time we traveled with our friends Bob and Linda Bray. Peggy and I were on our way up to visit our son and his family on Kodiak Island where Tony was working as a helicopter pilot flying rescue missions for the Coast Guard. Bob and Linda were going to join a nephew fishing for halibut. 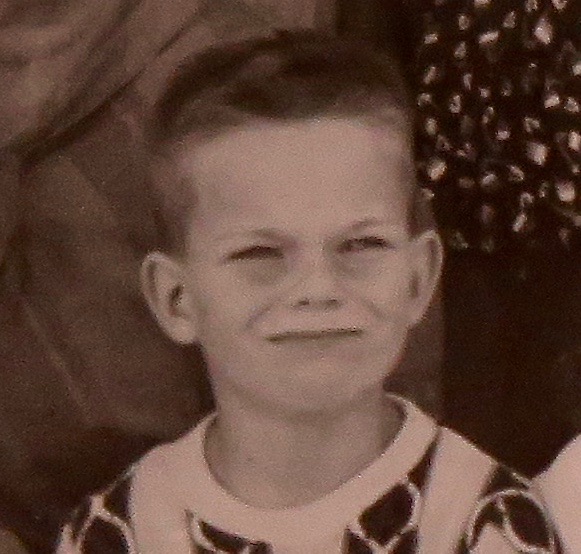 While driving the highway isn’t the challenge  that it once was, it still gives  travelers a taste of the Far North. Over the next few weeks I’ll take you over the highway from Dawson Creek, British Columbia to Anchorage Alaska as part of my Wednesday photo essays. Today, however, we have to get to Dawson Creek. There are various ways to reach the starting point but out last trip took us from Hope, British Columbia up through Prince George, which is the route we will follow today.

We followed Canada’s Highway 1/97 out of Hope following the Fraser River. One of our first stops was to admire the old Alexandra Suspension Bridge across the river. It’s a beauty that is no longer used.

Another perspective on the Alexandra Bridge. 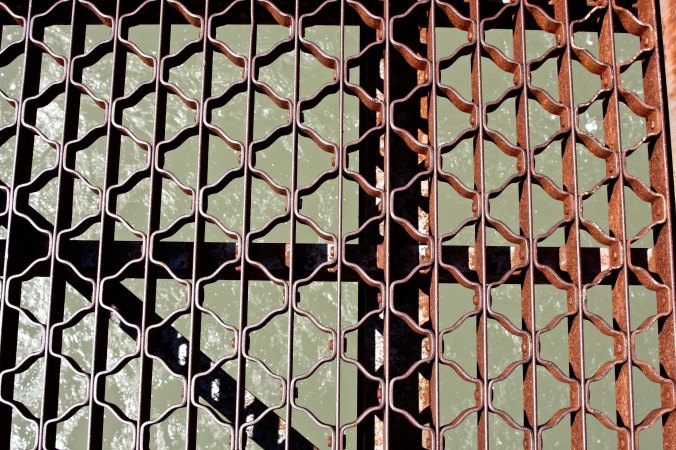 Looking down through the grates at the Fraser River!

The Visitor Information Center at the 100-mile house featured the world’s largest cross-country skis! Communities throughout Canada use such fun gimmicks to capture the attention of tourists.

I am a fan of tourist information centers in British Columbia. In addition to being chock-full of information and friendly people, they are often beautifully done, like this example in William’s Lake. 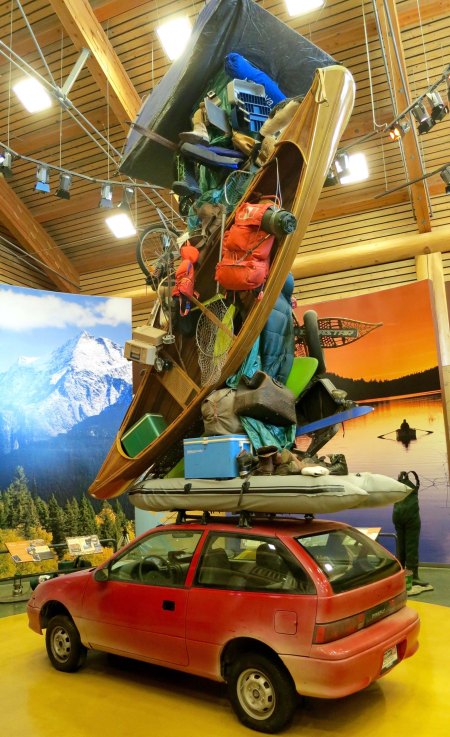 This car in the William’s Lake Visitor Center was a spoof on how much stuff tourists load on top of their cars.

Hanging baskets of petunias were featured outside. While such baskets are common now, I first became familiar with them on a trip to British Columbia in the late 60s.

We stopped at an attractive campground on Dragon Lake in Quesnel where Peggy went kayaking to celebrate her birthday. 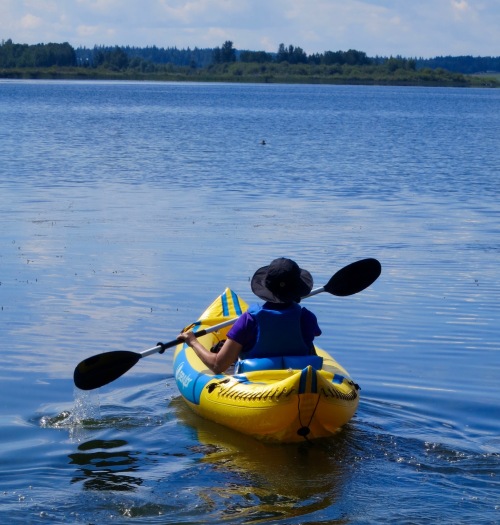 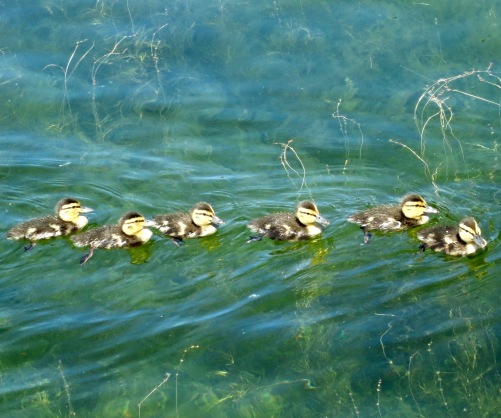 The next morning, we found the campground had gone to the dogs. We were in the middle of dog agility competition. This little fellow was weaving between posts. 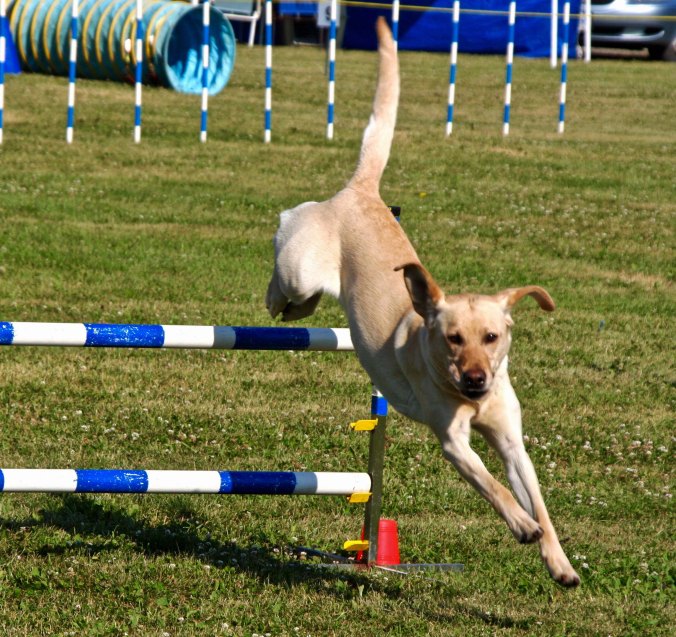 Size didn’t matter in the trials. These bars were lowered for the little fellow shown above. 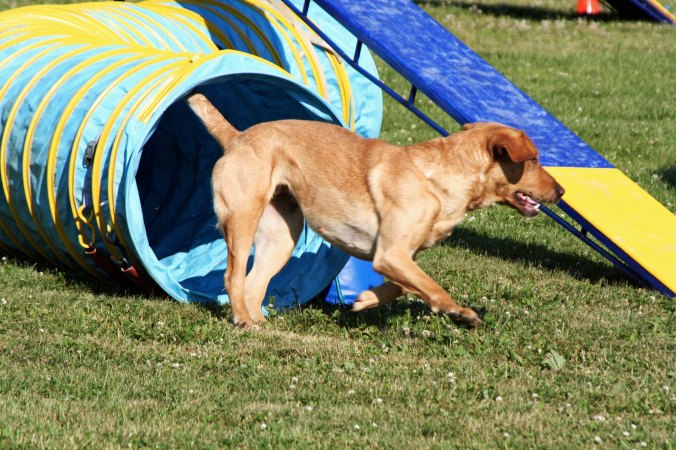 Dogs are required to maneuver through a number of different obstacles including tunnels. The clock is ticking.

Watching the owners was as fun as watching the dogs. The woman in pink is urging her dog along. The man running along behind is the judge.

The country changes as you move into the interior of British Columbia, becoming drier.

Rivers have always served as access to the interior, first for river travel and then for building railroads and roads along.

We were in for a real treat when we came to the town of Chetwynd, which is close to Dawson Creek. Wood carvers had been at work in an international competition. This praying mantis had taken first prize but it had a lot of competition! 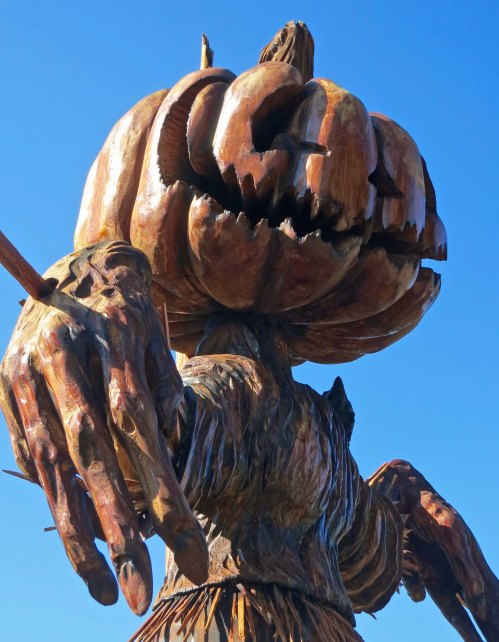 Such as this scary pumpkin head scare crow…

And this dragon with an attitude. Or…

…a bas-relief of St. George slaying a dragon. 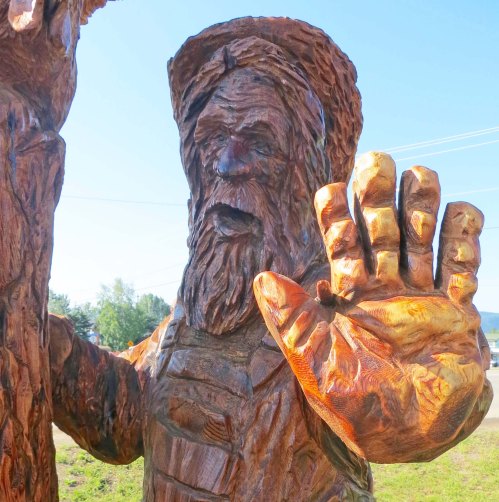 Or this old gold miner apparently telling you to stay out of his claim.

I am not sure what this fellow is up to but I wouldn’t want to meet him on a dark night— or in the middle of the day.

And then we made it to Dawson Creek and mile 0 of the Alaska Highway. Bob, Linda and Sister.

Peggy and I. Next Wednesday, we begin our trip up the Alaska Highway.

FRIDAY’S POST: Another in the MisAdventures series. I abandon the Graveyard for the Pond.

MONDAY’S POST: Rafting down the Colorado River through the Grand Canyon.

WEDNESDAY’S POST: We begin our journey up the Alaska Highway.