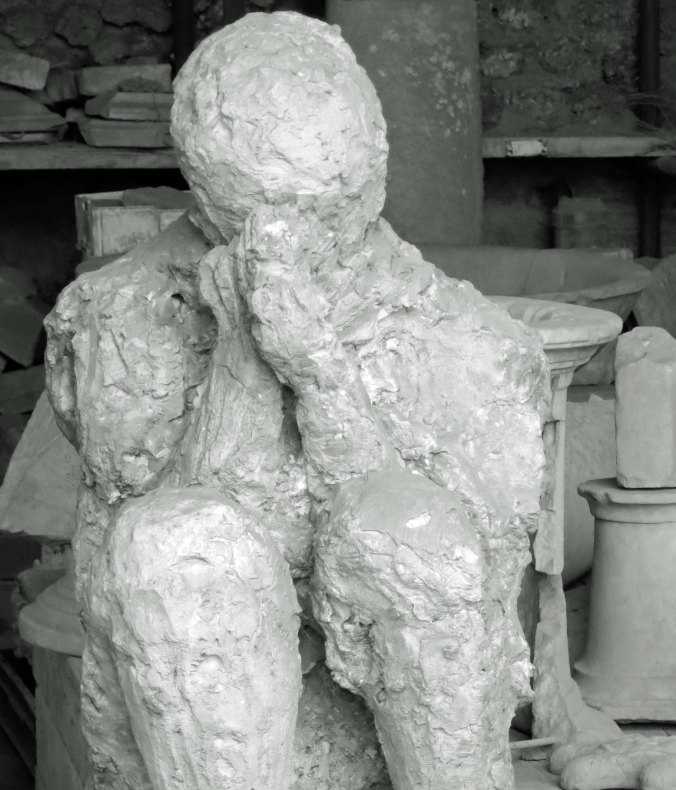 A blanket of ash rushed down from Mt. Vesuvius on Pompeii in 79 CE, suffocating many of the city’s residents. Those who could escape, did. Those who didn’t were covered by a flow of molten rock the next day, preserving their bodies as they died in poses that can still be seen today.

It’s time for another Wednesday photo essay where I scroll through the 75,000+ photos that Peggy and I have taken from around the world and find something that catches my attention. Today it is Ancient Pompeii. Next Wednesday it will be Costa Rica.

Their lives would have been interrupted by a series of small tremors. It had to be worrisome; seventeen years earlier Pompeii had come close to being destroyed in a massive earthquake. The city was still being rebuilt. Possibly the residents woke on the morning of August 24, 79 CE and looked fearfully at the restless mountain that loomed over them— and then went on about their business.

Mt. Vesuvius still looms above Pompeii today. This is what it looks like from the Temple of Jupiter. 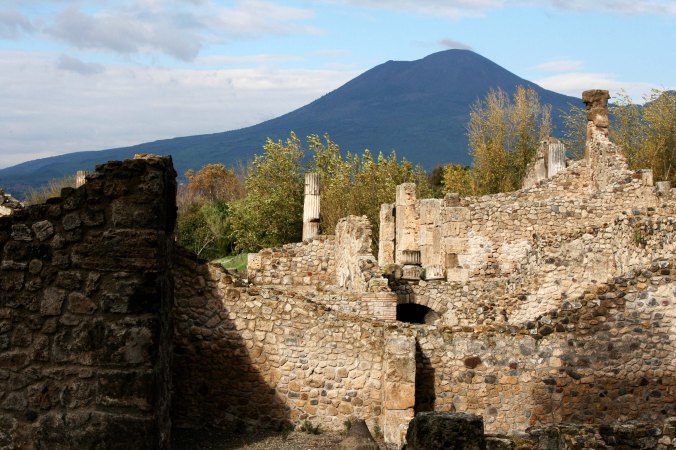 Mt. Vesuvius exploded in a massive eruption sending tons of ash, gas and rocks spewing 20 miles into the sky and forming a dense mushroom cloud. Winds quickly carried the ash into Pompeii, turning day into night and dreams into nightmares. The majority fled, escaping by whatever means available. Those who stayed behind died— suffocating at first under the blanket of thick ash and ultimately, the next morning, by being buried alive under a pyroclastic flow of molten rock and gas that flew down the mountain at speeds close to 100 miles per hour.

It must have been incredibly fast, and frightening.

You have to wonder if this person was simply asleep when it happened.

Viewed from an archeological perspective, history’s tragedy has become today’s blessing. The molten rock and ash that covered Pompeii, also preserved it, providing historians with their most complete view of what life was like in the ancient Roman Empire. 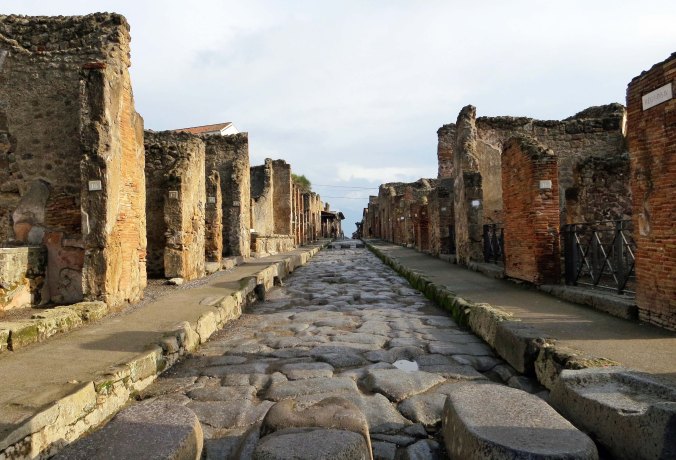 Buildings and streets in Pompeii are well-preserved. Ruts from vehicles using the roads can still be seen, as can road crossings. 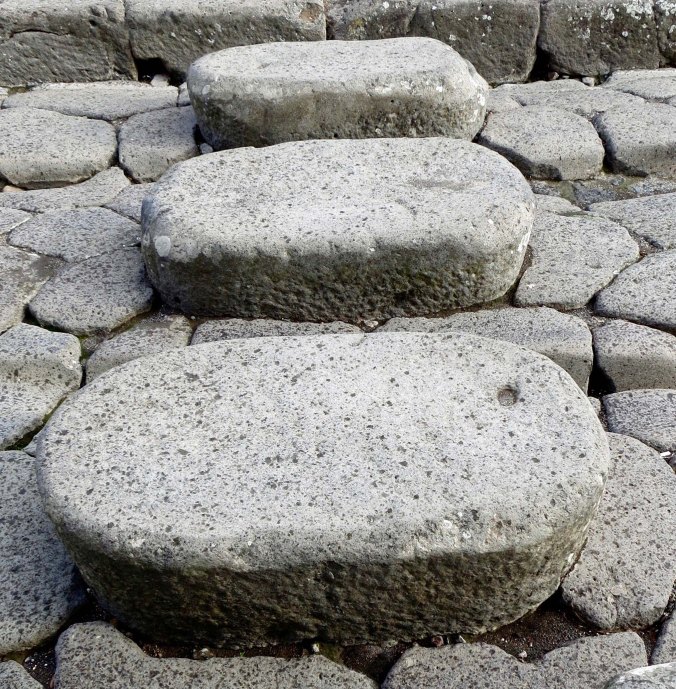 Streets were cleaned by flooding them with water. People kept their feet dry by using these crossing stones. 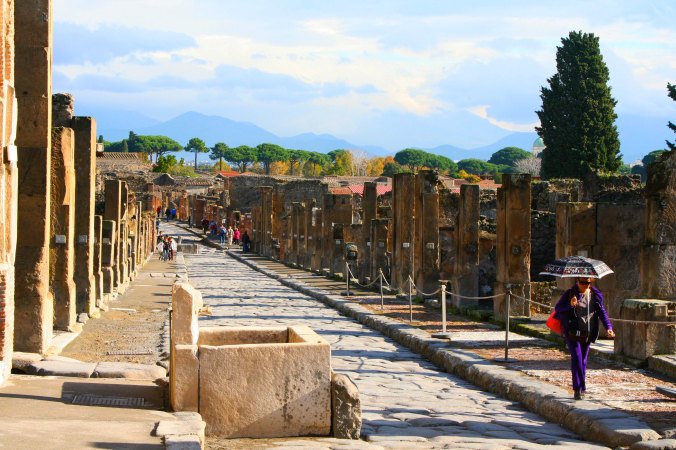 Another street scene. Note how carefully the buildings had been aligned. The square box might have been a community water cistern.

Peggy and I were amused by its modern day equivalent where a faucet was added to the mouth of an early sculpture.

Public baths were a part of most Roman towns and cities. This one was decorated with a detailed relief… 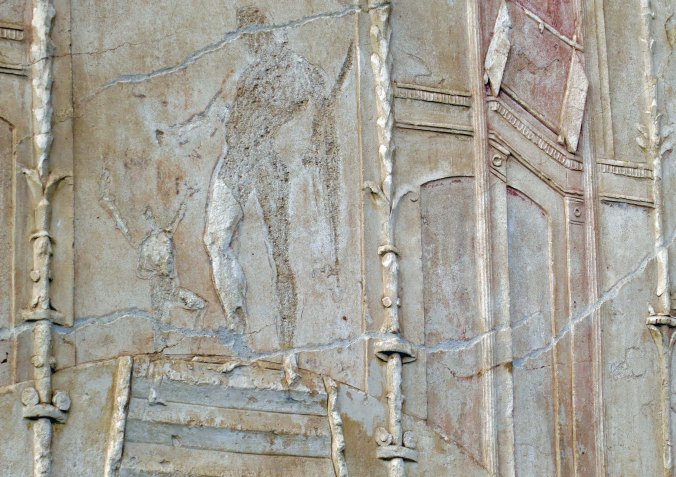 Which included a father and child walking down stairs. 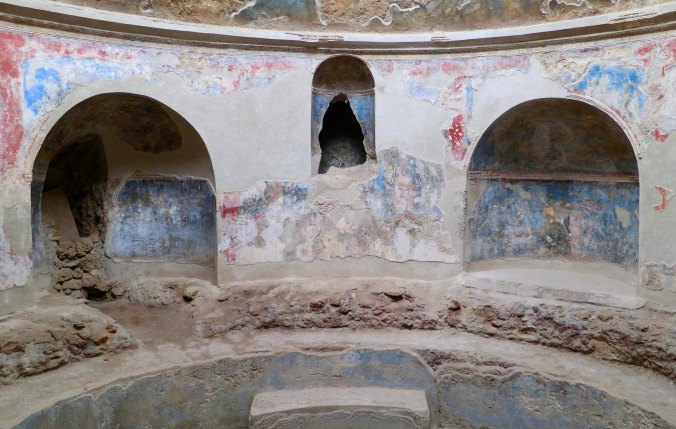 An inside view of the baths provides an idea of how luxurious the baths would have been. Remnants of murals that once covered the walls still remain.

Ceilings were decorated as well. This one shows bas-reliefs of people and animals.

Columns are another thing that most Roman towns shared. These set off a training school of gladiators, who were expected to go out and die for the greater glory of Rome, or to fight and possibly die to entertain Roman citizens. When I closed my eyes, I could almost hear the clashing of swords.

Looking up at one of the columns.

Peggy did a clever job of catching Jupiter with his hand seemingly wrapped around a column in his temple. The god was apparently traveling light that day. 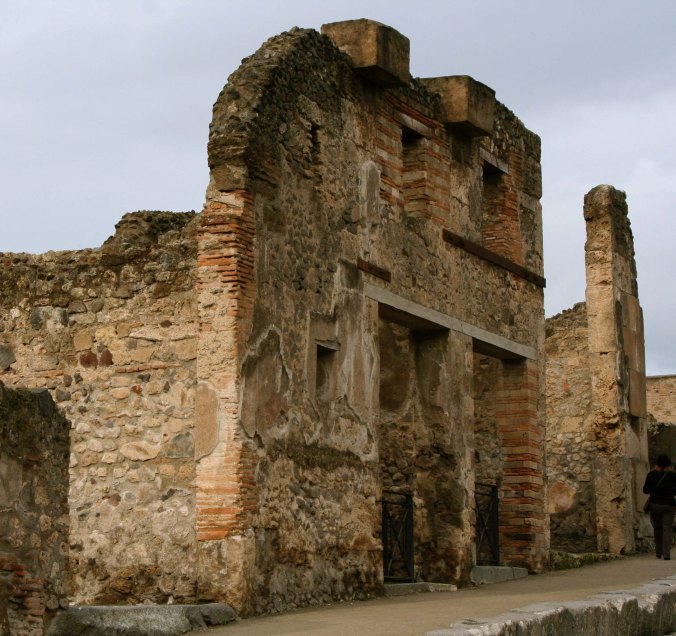 Many of the buildings were remarkably preserved.

Others more closely resembled other Roman ruins found throughout the Mediterranean. 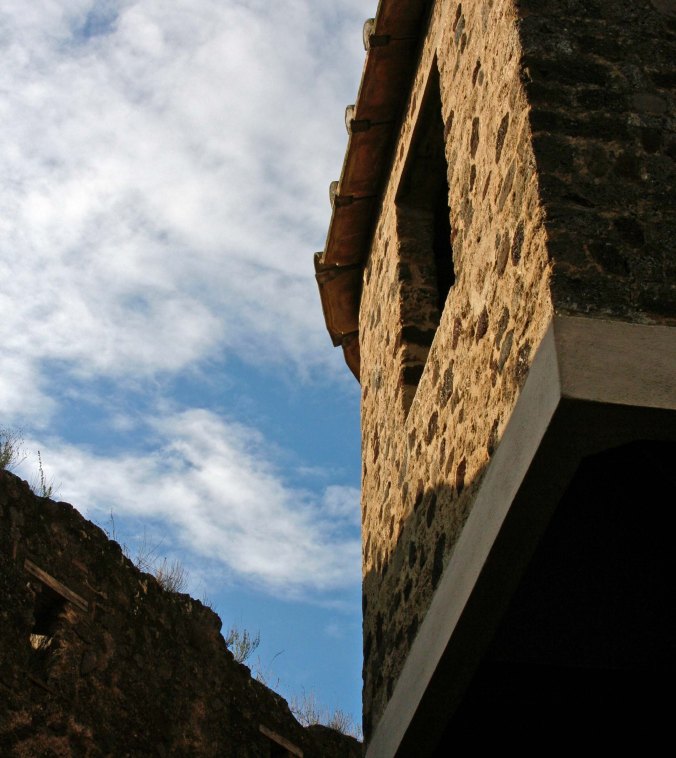 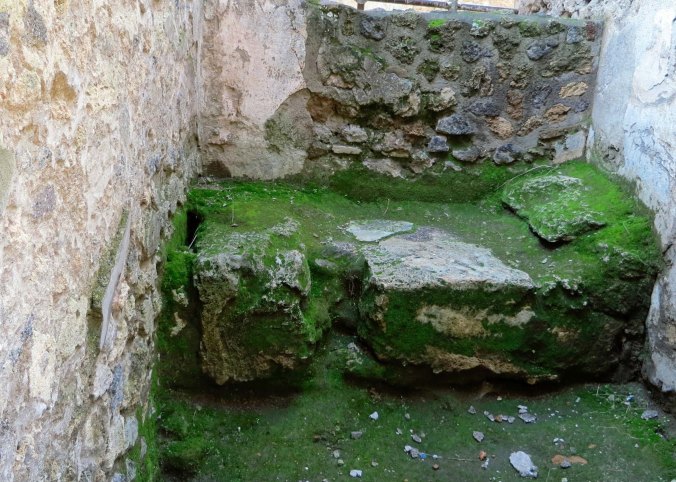 This was one of the beds. It would have been covered with a mattress, but still… The walls of the brothel included paintings that showed the various services available.

A meal out may have included stopping by this place. These were designed to hold prepared food and keep it hot. It strikes me as a fast food/takeout restaurant.

Bread was baked in this oven. 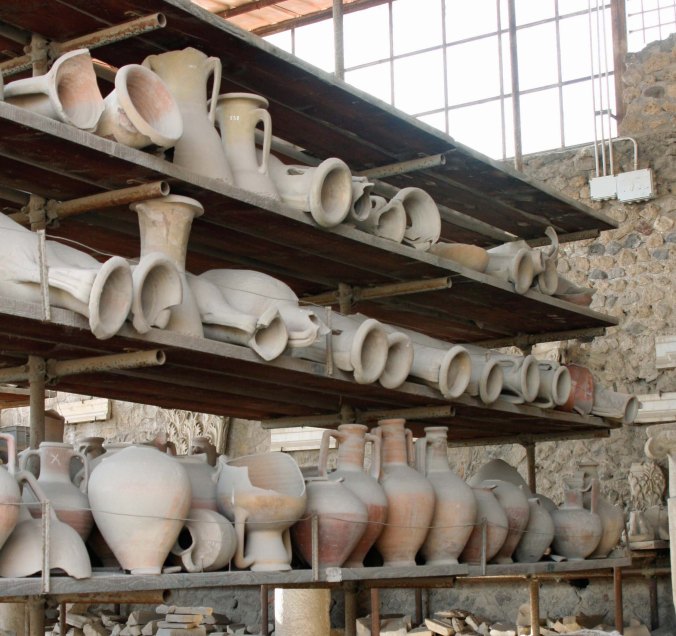 A large number of storage jars, such as these, were found in the city.

The large amphitheater would have accommodated most of Pompeii’s residents. The rich folks got the lower seats. Those not so fortunate, the upper ‘nosebleed’ seats. 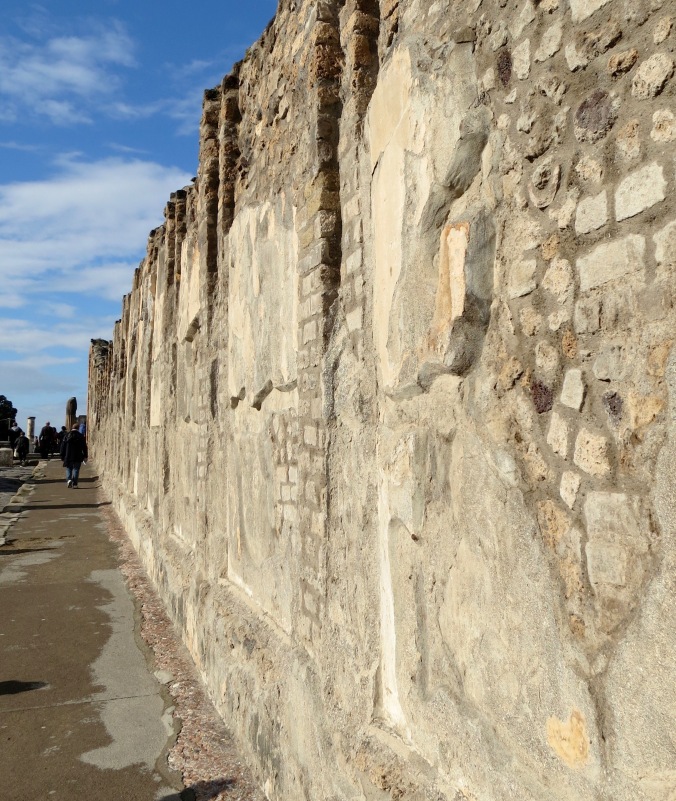 Another street scene in Pompeii. Murals were  included on the walls. There must have been a great deal of civic pride in the city.

A little girl and her dog…

And a modern resident of Pompeii.

I’ll conclude with this photo from the Mediterranean side of Pompeii. In 79 CE, the sea was only a couple of hundred yards away. Today it is a couple of miles. Those who had boats or access to boats would have been fleeing from here on that fateful August day, escaping the death that was raining down on their fair city.

FRIDAY’S POST: I determine it’s my job to rule the first grade but no one else seems to agree. Mrs. Young gives me a spanking for my effort.

MONDAY’S POST: It’s all about food on our river trip. And why did Homeland Security determine it was necessary to check our food boxes for a bomb?

WEDNESDAY’S POST: We leave Italy and the Mediterranean to venture off to the Amazon..