Graceful swans share the Trent and Mersey Canal with narrowboats. I decided to render this fellow in black and white to emphasize its feathers and show how swans tuck their wings over their backs.

This is my second post on the Trent and Mersey Canal. My first post took us from Sawley to Burton upon Trent. In today’s post, Peggy and I, along with her sister and brother-in-law, Jane and Jim Hagedorn, visit Burton on Trent and return to Sawley.

Josiah Wedgewood’s concern about his pottery was a driving force behind the building of the Trent and Mersey Canal in the 1770s. Too many of his fine dishes were being broken when they were transported over the bumpy, rough roads of the time. A canal would provide for smooth sailing, or, at least smooth boating, and every industrialist wanted one to connect his plant with growing markets. For a brief period of time in the early industrial revolution, canals were the in-thing. Hundreds were built throughout England and Europe— as well as in the youthful United States.

This painting on the Jilly-Dee narrowboat spoke of earlier times on the canals when manufactured goods were carried on barges towed by horses and mules.

The painting reminded me of Erie Canal in New York state and one of the first songs I learned in elementary school. Here it is:

It was one of my favorite tunes, right up there with Old Dog Tray. I was particularly enamored with the idea of having a mule as a pal.

We passed under several low bridges during our trip, but none made us duck. Fortunately, our journey didn’t involve any of the long, low tunnels located on other parts of England’s canal system. I read that the earliest tunnel on the Trent and Mersey Canal was so low that the boatmen would lay down on their backs and push the boat through with their feet, using the top of the tunnel for leverage— for a mile! The mere thought of this sent claustrophobic twinges through my body!

“Low bridge, everybody down!”

Railroads and modern highways made canals obsolete for transporting goods and would have spelled their doom except for the interest of historians, hobbyists, and the recreational industry starting in the 1950s. Recreation is booming today and numerous people have also discovered that narrowboats can provide the ultimate in an inexpensive, small house lifestyle for those with a gypsy nature. Sounds good to me. Most of these homes are uniquely decorated and come with interesting names like Belly Button, Idunno, and In the Mood. Others, such as Nomad Dreams, Sacagawea, and Gone Roaming, suggested the wandering nature of their owners.

Narrowboats that people use for homes are often gaily painted and uniquely named! 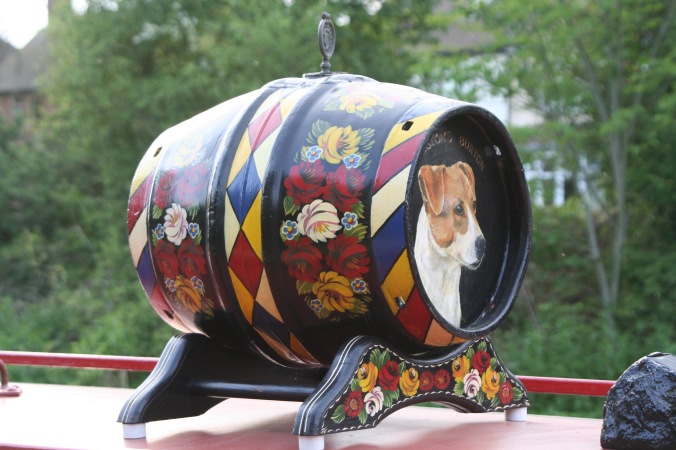 One of the boats had this painted barrel sitting on top… 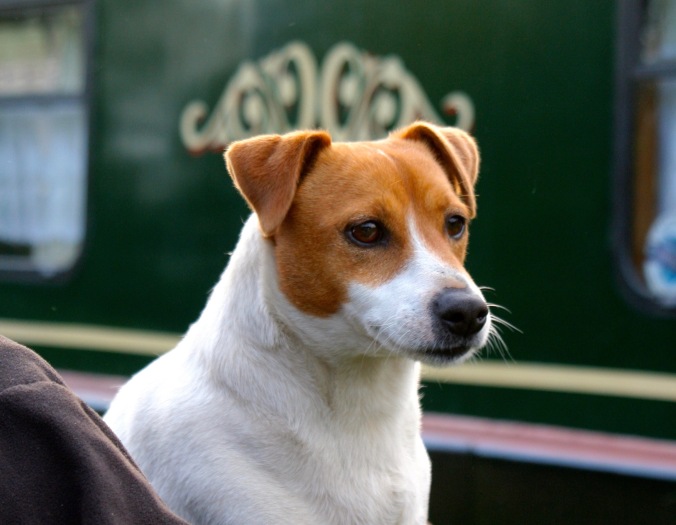 And then we spotted the model!

Peggy, Jim, Jane and I explored Burton upon Trent, spent the night, and then began our journey back on the Trent and Mersey Canal to the Sawley Marina. Once again, we enjoyed the challenge of piloting our 65-foot boat around obstacles and through locks, while appreciating the beauty and peace of the British countryside. Our most exciting moment was when Jim decided to park our boat up on the bank…

We wandered around admiring buildings in Burton.

And found this gargoyle with its tongue sticking out at St. Paul’s Church.

Marston’s original brewery is located in Burton on Trent and has been a longterm mainstay of the city’s economy. I went onto Marston’s website and found this quote: “No Marston’s, no beer, no beer, no Burton.”

Of course beer wasn’t the only alcohol available…

Walking back to the canal, we were reminded by this carved kingfisher of the birds that make the canal their home. 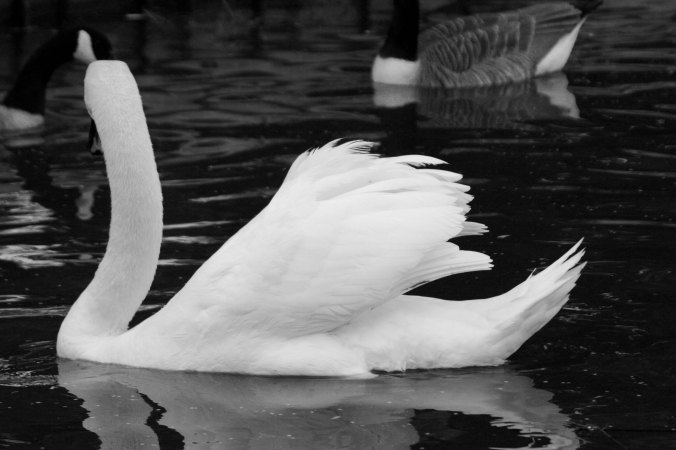 Including swans and their Canadian Geese cousins.

A mallard moved along on some important mission…

While a pair of swans decided to make babies.

Of which the mallards had already contributed a substantial number. There was no lack of baby ducks on our trip back…

Cattle enjoyed a moment of sun… 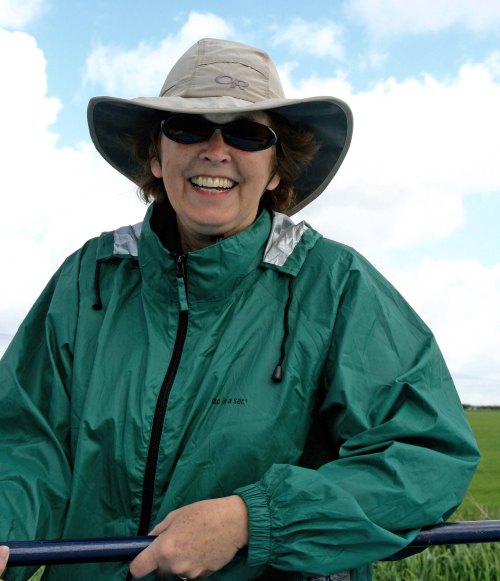 We all continued to enjoy the scenery and serenity along the Trent and Mersey. 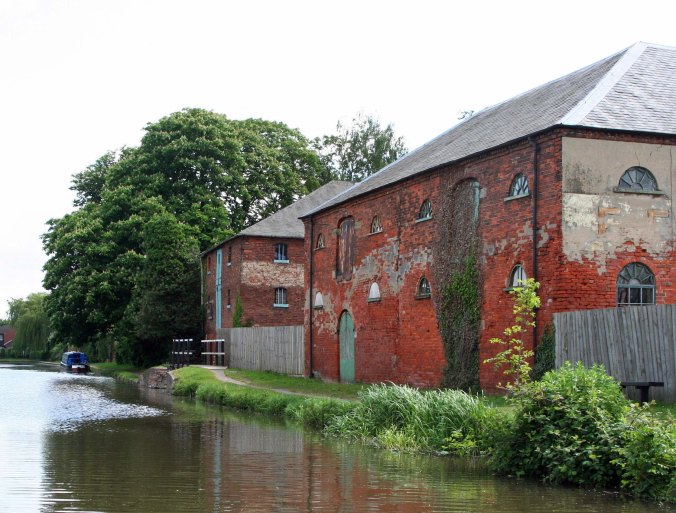 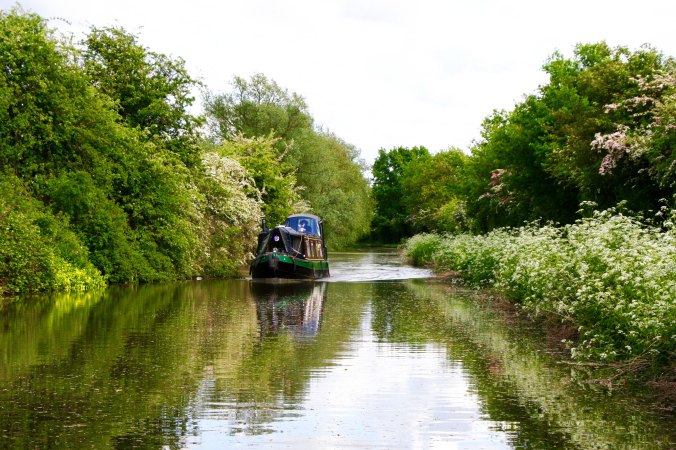 And other narrowboats. This boater had created a canvas pilot house as protection from the elements. There were occasions when we were envious.

Our progress was delayed when Jim decided to park us on the bank. That’s when we really learned just how heavy our boat was. 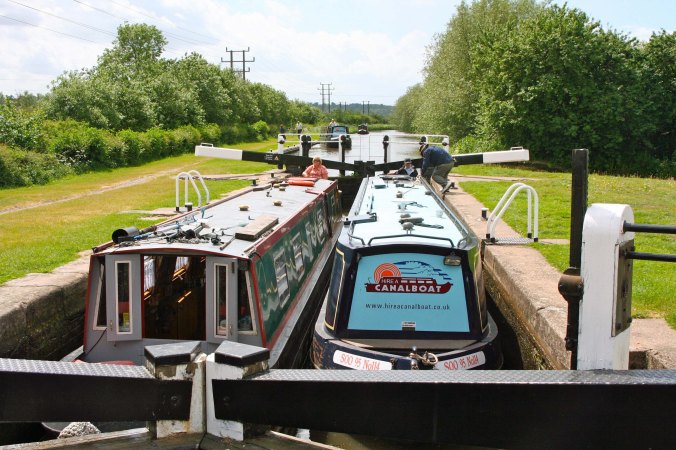 Locks continued to slow us down as well. This was a double-wide. Just barely.

When we spotted this steeple, we knew that we were close to home.

And thus we arrived. 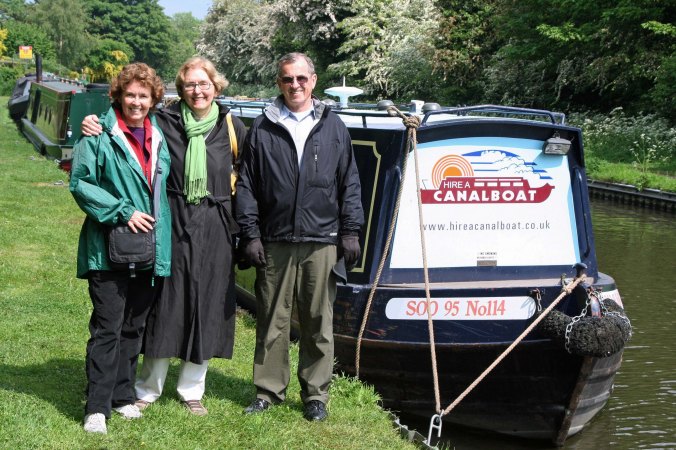 A final shot of Peggy, Jane, Jim and our moored boat.

SATURDAY’S POST: It’s back to blogging my book on MisAdventures. This time I hire the family pets to protect me from the dangerous ghosts that live in the graveyard next to my childhood home.

MONDAY’S POST: Peggy and I return to our before-Christmas adventure along Washington’s coast.

WEDNESDAY’S POST: A photograph essay on Scotland, which is where we went after our narrowboat trip.

39 thoughts on “Want a Small House— Think Narrowboat… A Trip on the Trent and Mersey Canal: Part 2”