Raising cattle to produce dairy products is big business in the Tillamook area. Peggy and I found this T-shirt at the Tillamook Cheese Factory.

I am going to get to the cows and their four stomachs, but first I want to cover our stay at Rockaway Beach, which is about 15 miles north of Tillamook on Highway 101. Our suite looked out on the ocean. We could watch the waves roll in and hear the continuous roar of the ocean. Wintry skies brought rain but the clouds were also great for beautiful sunsets. We headed out whenever there was a break in the weather, and even when there wasn’t. We walked the beach, visited local shops, and ate out at the town’s restaurants. Thanksgiving dinner was at Grumpy’s and Mrs. Grumpy hovered over us to make sure we ate our veggies. How much more down-home can you get? The complete meal, which included all of the Thanksgiving favorites, cost a whopping 12 bucks. “I want it to be affordable for everyone,” Mrs. Grumpy primly informed us.

The ocean was shallow and produced a long line of waves that created a roar as opposed to the sound of single waves crashing.

We were treated to several beautiful sunsets looking out from our suite at Rockaway Beach. (Photo by Peggy Mekemson.)

Small shops had the usual touristy stuff found in coastal tourist shops everywhere. “Go to Flamingo Jims,” we were urged. As to why it was named Flamingo in an area where the tropical bird would freeze, I didn’t have a clue. But we went. And we weren’t disappointed; it was filled to the brim with cheap souvenirs. We wandered around and checked out T-shirts, mermaids and sea shells. We could have bought a sand dollar for a dollar, but Peggy prefers to find her own. I was reminded of this old tongue twister. Try saying it as fast as you can without a mistake.

She sells sea shells by the sea shore.
The shells she sells are surely seashells.
So if she sells shells on the seashore,
I’m sure she sells seashore shells. 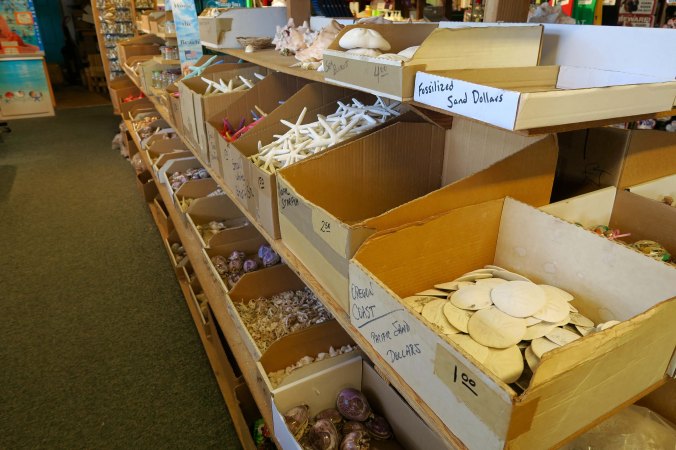 Any good tourist souvenir shop on the ocean has seashells to sell.

And mermaids. A twist for the Northwest is Bigfoot(s), or is that Bigfeet? You can see some up in the righthand corner.

The beach seemed to go on forever. One end was dominated by the sea rocks that Rockaway Beach is famous for; the other by a forest covered mountain. If you look at the rocks from the right angle, they make an excellent sea dragon. Welcome to Oregon, Nessie! A creek divided the beach about halfway along. Sea gulls patrolled the waterfront, checking out both the ocean and tourists for possible food. A small boy threw out a couple of pieces of bread and was suddenly surrounded by 50 of the birds, in seconds! They seemed to materialize out of nowhere. How do they do that? 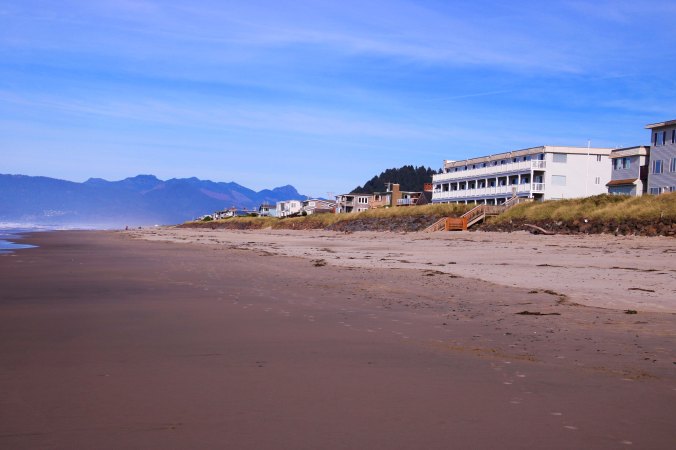 Looking north up the beach at Rockaway. Our suite was on the second floor of the building on the right. Our footprints lead down to where we took the photo. (Photo by Peggy Mekemson.) 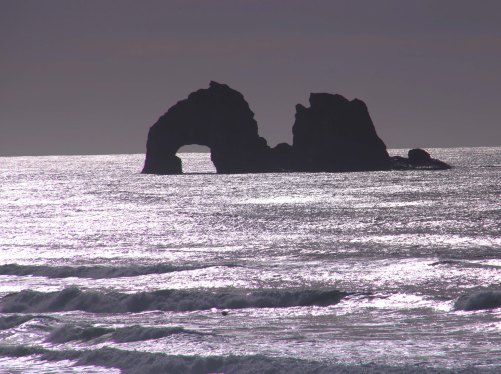 The sole rocks of Rockaway Beach look very much like a sea serpent with its head under water searching for tasty fish. (Photo by Peggy Mekemson.) 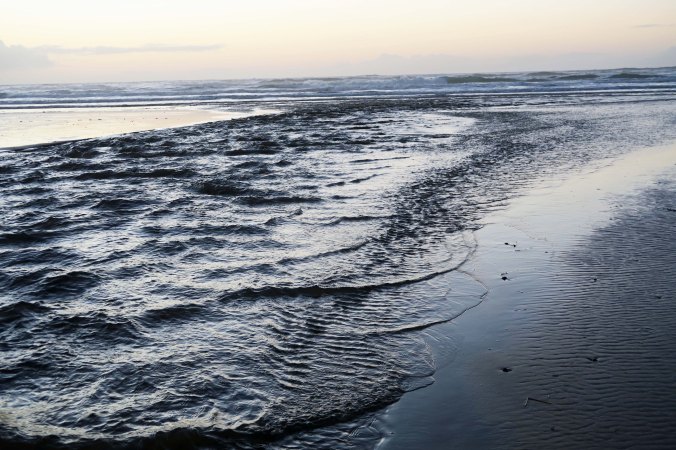 A creek flowing across Rockaway Beach limited how far we could hike south.

A seagull steps out on his gull-friend at Rockaway Beach.

When we ran out of things to do in Rockaway, we drove 15-miles south to Tillamook. I’ve already done posts on Cape Meares, Munson Creek Falls, and some very wet alpacas. On our way, we decided to check out a small county park in Barview and found the Coast Guard practicing air to sea rescue missions by helicopter, which is what our son Tony does. 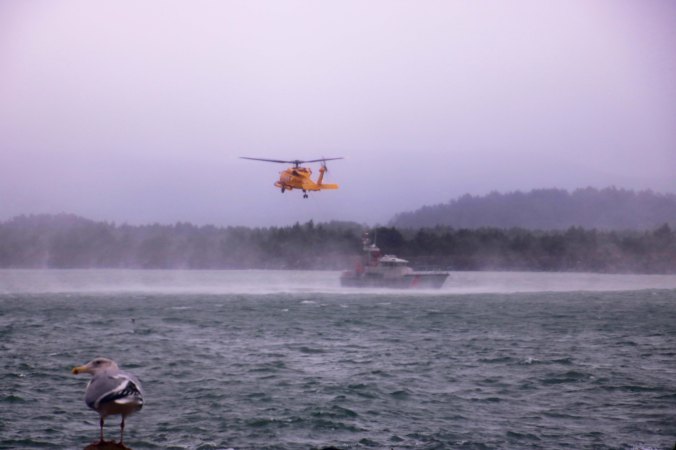 And here, a seagull joins us in watching the Coast Guard practice rescue operations at Barview, just north of Tillamook.

Part of this practice included dropping a man down on to a rocking boat to help in a rescue effort, which was a operation our son was involved with several times while flying  helicopters over rough Alaska waters.

In Tillamook, it is almost required that people stop off at Tillamook Cheese and Ice Cream factory. The cheese is good and can be found throughout the US, but the ice cream is to die for. Our refrigerator is always stocked with a half-gallon.  I should probably weigh 300 pounds but we limit our consumption to Date Night, which falls on Wednesday, as it has for the past 27 years.

The visitor’s center at the Tillamook Cheese Factory included a number of exhibits on the dairy industry, from beginning…

I was particularly interested to learn that a cow has four stomachs, which were two more than I was aware of. I also learned that when a cow chews its cud it’s know an ruminating, is case you ever wondered about where the word came from. So, next time you find yourself ruminating, you might want to break out some gum.

When we were out and about and lost, we also came on the Latimer Quilt and Textile Museum where I found the alpacas. Peggy’s love of quilting demanded a visit. We found numerous quilts, a doll collection, looms, and a lot of history.

You will probably remember the alpacas. Check out the blue eyelashes on this gal. 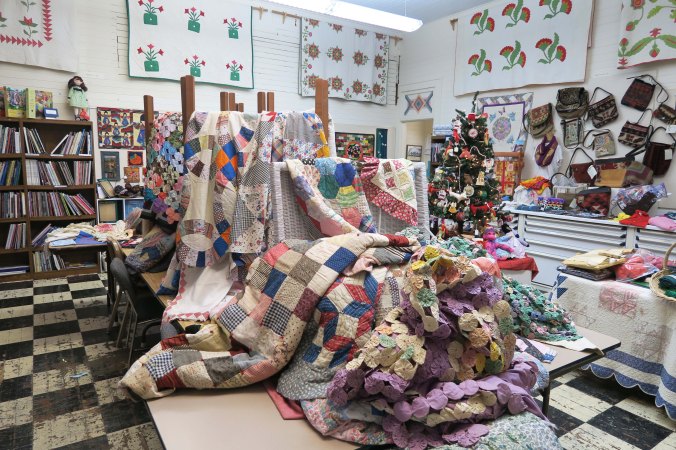 As might be expected, the Latimer Quilt and Textile Center was filled with quilts. The Center was preparing for a big sale. These are more traditional quilts.

And this one a more modern version.

A number of other textile products were offered as well, including this dress. We assumed something would be worn under it, but possibly not at Burning Man.

A number of looms were available for weaving.

There was even an extensive doll collection. I picked this one out for her reading material.

I’ll conclude today’s post with this gorgeous quilt that Peggy made for our bed using a vintage Singer Featherweight sewing machine that her grandmother bought in 1933.

WEDNESDAY’S PHOTO POST: Join Peggy and me as we explore the Greek island of Santorini.