I found this playful sign on the fence that marks the outer limits of Burning Man. I think even Trump would laugh.

Being ‘out on the edge’ at Black Rock City can mean many things. For example, you might take a class in quantum theory. There are a number of serious scientists at Burning Man and they are eager to share their knowledge, to introduce you to the world of Schrodinger’s cat and ‘spooky action at a distance,’ as Einstein described quantum entanglement. Science doesn’t get much edgier.

But I mean ‘being on the edge’ literally. I am talking about the far-out border of Burning Man where only a plastic fence separates you from the seemingly infinite desert, out where the pounding beat of industrial music and crowds are a distant memory, out where the buffalo roam. Except I’ve never found any buffalo. I have, however, discovered many weird things over the years ranging from bizarre cats to strange aliens. Heading out there is a must for me. And Horse with No Name is always raring to go. “Clippity clop, clippity clop, neigh, neigh, snort, snort!” (Remember, that’s the sound he makes when you pinch his ear.)

Vast tracks of seemingly endless desert and the tracks of patrolling BMORG vehicles are all that lie beyond the Burning Man fence.

This year, I found the amusing border sign I placed at the top of this post, the gorgeous Flower Tower, a giant Victrola, a speak-easy/den of inequity, and range cattle— the latter two are something you expect to find in rural Nevada. But first, the sign. I was assuming I’d find a fair amount of Anti-Trump stuff at Burning Man. It isn’t like a lot of the President’s supporters attend the event. But the sign was the only thing I saw. (Admittedly, I missed a lot of Burning Man.) I speculated that, one, Burners were trying to escape from the world of pro and anti-Trump with its endless media barrage, or, two, BMORG wasn’t eager to twist any tails in Washington due to the fact that the event is held on federal property. Permits are always iffy at best, even though the organization pays dearly for the privilege of using the land.

I do think Washington could learn a lesson from the fence, however. Nobody, but nobody gets in or out. It appears to be much more effective than anything the US has built or might spend billions on building along the US/Mexico border. I crossed over it once as a test. Within seconds, a BMORG vehicle was charging down on me. I quickly retreated and was long gone when the vehicle arrived. Horse with No Name can run really fast with the proper motivation. Maybe the President should hire Burning Man to run his border security…

On the outside looking in, I had crossed over to the other side. Shortly afterwards Peggy warned me about the approaching BMORG truck.

Now, on to the den of inequity. Boy, doesn’t that sound biblical? Bordello, brothel, and cat house seem a lot less damning. And who can forget The Best Little Whorehouse in Texas? Prostitution, as you may know, is legal in Nevada. There are several brothels found out on the state’s lonely highways. Peggy and I have passed by most of them on our jaunts through Nevada. One of the most famous, the Mustang Ranch, is located just outside of Reno on I-80. Thousands of Burners go by it annually. If you know where to look, you can see the trailers lined up— and a large parking lot. I first heard of the Ranch back in the 70s when Joe Conforte, its owner at the time, was a leading Reno businessman. He was serving as chair of the city’s annual Valentine’s Day Ball, which was dedicated to raising funds to fight heart disease. As I recall, the Heart Association got a bit embarrassed over that one. Conforte fled to Brazil in 1991, barely escaping ahead of the G-men. He never did like paying taxes.

Another one of Nevada’s brothels. As businesses go, the overhead is low. The Shady Lady is located near the town of Goldman on the highway that connects Reno and Las vegas.

The Black Rock Blind Tiger’s rickety speak-easy/brothel at Burning Man was located next to the fence. A group out of Austin, Texas was responsible for building it. When I stopped by, Burners were charging around looking for clues that were supposed to give them entrance to the Prohibition era speak-easy. I was reminded of the Ella Fitzgerald song, Hernando’s Hideaway. “Just knock three times and whisper low, that you and I were sent by Joe.” 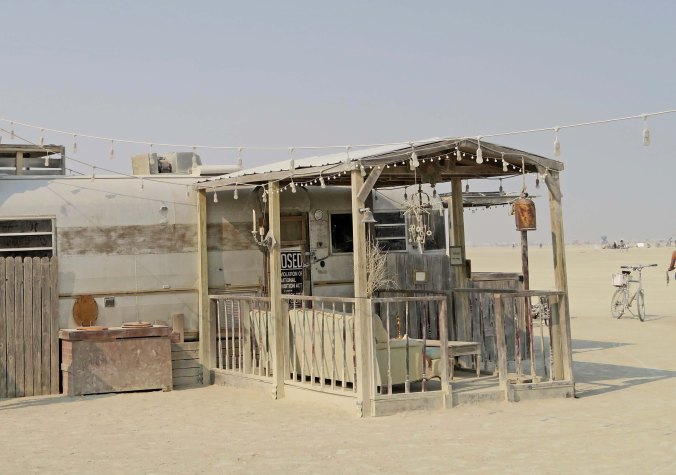 The speak easy trailer. A sign on the trailer announced that it had been closed by the Black Rock City District Court for violation of the National Prohibition Act.

As for the “Playful Pussy Tiger House,” it was closed. What else could the Madame expect? You are not allowed to sell anything at Burning Man. It’s a gifting economy. I wandered around and took photos. I even managed to persuade a Burner to pose for me in a large bathtub.

The infamous den of inequity… 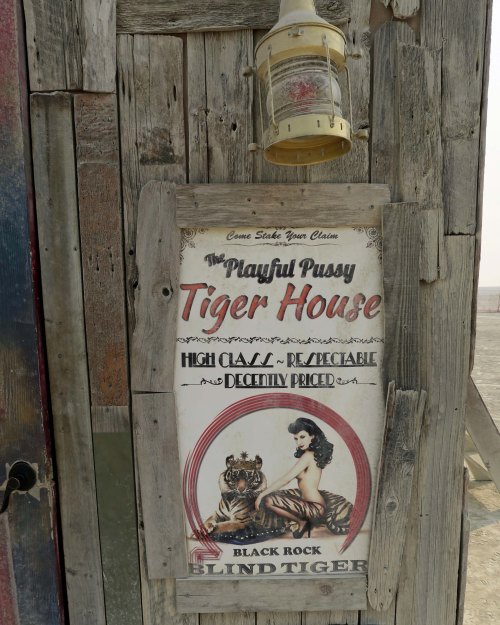 Naturally, I had to peak inside. 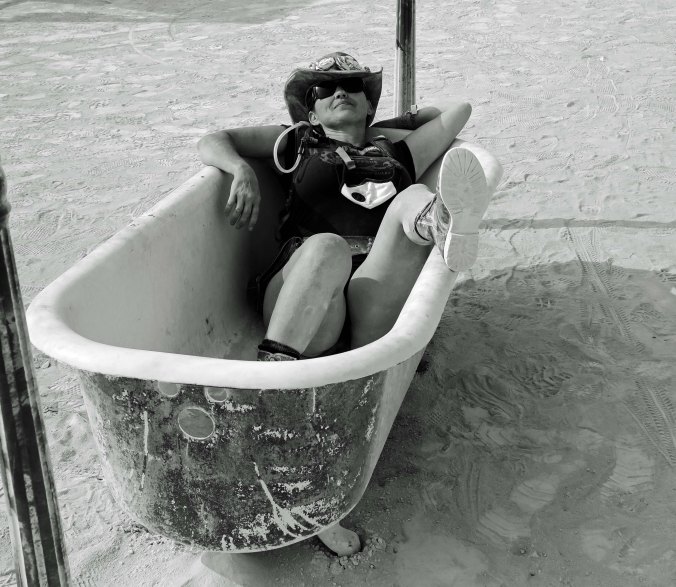 A  helpful Burner offered to pose for me in the large bathtub found outside the speakeasy. For perspective, of course. 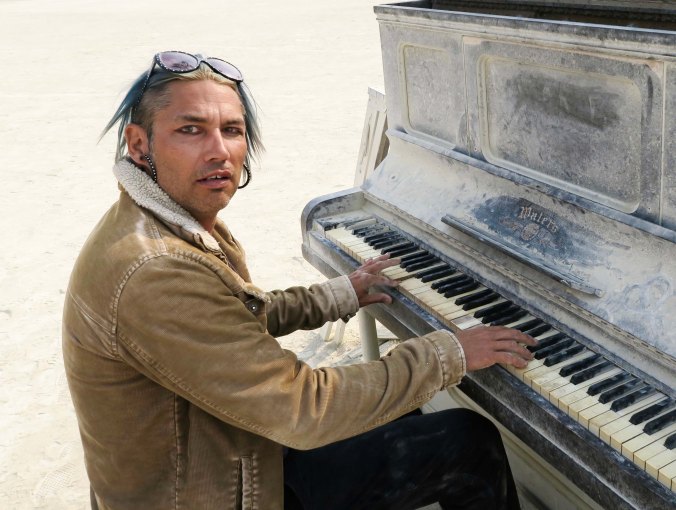 This fellow also agreed to pose. He was quite good. Note the piano. Waters is an American classic. The props brought up from Texas were very authentic. And how about those intense eyes.

Enough on the shady side of the fence, however. Let’s move from the sinful to the sublime, from our slightly titillated look at the world’s oldest profession to the lovely Flower Tower. I featured a photo in Part 2 of this series. The Tower is another creation from the incredibly fertile imagination of Kevin Clark and his talented group of artists at Reared in Steel located in Petaluma, California. Two of the groups earlier Burning Man works— Redemption Rhino and Medusa— are among my all-time favorite art pieces at the event.

The Redemption Rhino created by Reared in Steel from Petaluma. (There’s a chance that the woman behind the wheel here was the same woman in the bathtub.) 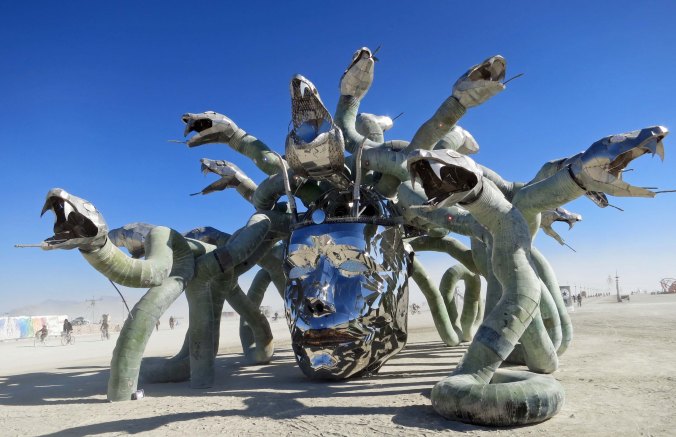 Medusa, another striking art sculpture by Kevin Clark and his fellow artists.

The Flower Tower was described as a cathedral devoted to happiness. Reaching 70-feet into the air, it was covered with thousands of colorful metal flowers, each made by hand and each unique. Like so much Burning Man art, it looked quite different at night than it did during the day. It was even supposed to shoot flames out from its steeple at night, but I missed that. 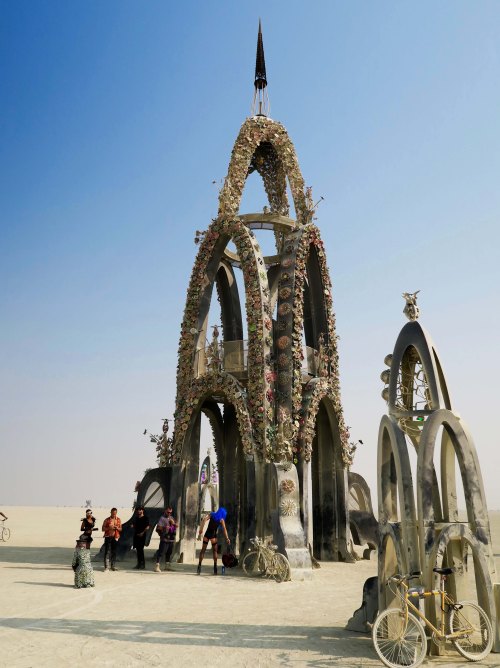 The 70-foot Flower Tower by day.

And a close up of the colorful metal flowers that adorned its side.

Looking up from inside.

The Flower Tower at night. 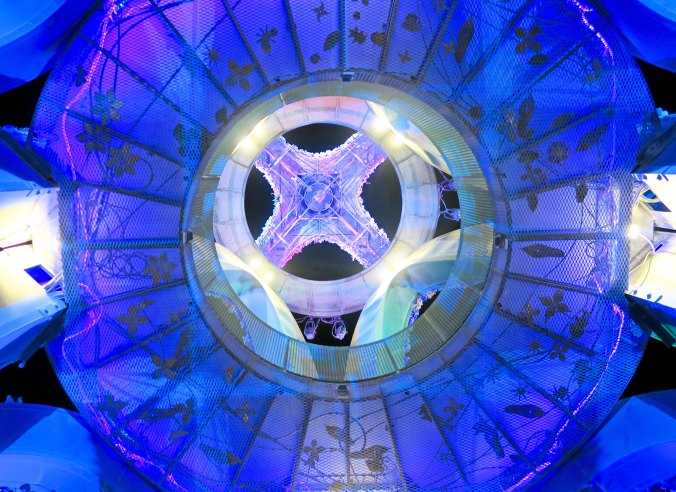 And looking up from inside at night.

I grew up in a small town nestled in the foothills of the Sierra Nevada Mountains of California. Our house had a basement, sort of. It was more like a crawl space with a dirt floor. It served as our attic, however, and was filled with ‘treasures.’ And black widows. More than once I imagined one crawling up my leg and charged out, ripping my pants off as I went. This story isn’t about the scary spiders and naked little boys, however, it’s about a Victrola phonograph we found there that came with a horn for a speaker and records that were etched on cylinders. It was an antique even in the 40s. I suspect it had been my mother’s when she had been a teenager. I’d love to have it now.

So, it was fun for me find the large Victrola out in the Far-Playa with its magnificent horn. The 30-foot tall structure was made of wood and steel by artists at the American Steel Studios in Oakland. And the music was marvelous… straight out of the early 1900s: blue grass, country, jazz and blues. I could picture my mother twirling away. Once again, I was reminded of the creativity of Burning Man artists. I was also reminded of a different era, back before music was digital, back before you could fit a thousand songs on the I-pod that I am listening to now with its Blue-tooth Bose speakers. John Coltrane and his jazzy Blue Train is helping me write.

How can anyone not love this large Victrola found out on the Playa of Burning Man this year?

A close up of the striking horn.

And a lovely painting on the side.

Some Nevada ranchers consider it a God-given right to run their cattle on public lands, for free. Just ask Clive Bundy, who had an armed standoff with federal agents over the government’s expectations that he would pay the $1 million in back fees he owed for running his cattle on BLM lands for 17 years.  You and I subsidize his profits with our taxes. Be that as it may, I expect to find cattle chowing down on public land. I found them up in the Sierras when I was backpacking this summer and I found them on the open range when I was driving from Cedarville to Gerlach on my way to Burning Man. I didn’t however, expect to find them out on the Playa. I’ll conclude today’s post with a couple of photos of the Sierra and Black Rock City bovines.

Open range cattle with their noisy bells. I ran into this herd while backpacking in the Tahoe National Forest this year.

The open range cattle of Black Rock City with their coats of Playa dust. They seem to be listening to music from the Victrola. Black Rock City can be seen on the distant skyline, far away from the outer Playa.

NEXT POST: In my effort to keep you entertained and provide variety, I’ll introduce you to some of this year’s mutant vehicles where rapid transit becomes rabid transit. Stay tuned.