There are lots of snakes found among the rocks at Three Rivers Petroglyph Site in New Mexico— rock art snakes. This is a rattlesnake. Check out the triangular, pit viper head. Also note that the break in the rock was used by the artist to provide a 3-D effect, which was a technique used frequently by Three Rivers artists..

We found his cousin in the Panamint Mountains of Death Valley. Peggy took its photo out the window of our truck. I thought it would look great coiled up with its tail buzzing and was taking my seatbelt off when Peggy did some rattling of her own, buzzing up the road, thwarting my desire to get up close and personal.

Peggy and I have returned from another backpacking trip, a little sore but fine otherwise. We travelled through a gorgeous virgin forest near our home in mountains we can see from our patio. Giant trees including Red Cedar, White Pine, Sugar Pine and Douglas Fir provided shade. It’s Big Foot country and we kept a sharp lookout. And, indeed, we may have found some proof of the big fellow’s existence! Be sure to catch my next post. But for now, back to the snakes of the Three River’s Petroglyph Site.

Bad snakes have been giving good snakes a bum rap for eons. It all started when the Biblical Eve bit into the apple she had obtained from the proverbial snake in the tree and realized that she was naked. It must have been a shocking discovery. Snakes have been pummeled, stomped, cut up, diced, crushed, shot, speared and smashed ever since.

Actually, there is no such thing as a bad snake; there are only snakes that have had a bad childhood and will bite you if you step on them, or wake them up when they are sunbathing on their favorite rock, or lollygagging in a scummy pond. They don’t really mean to kill you; it’s a waste of good venom. Normally, we are too big to eat. Although there was that huge boa that lived in the lake next to my house in Liberia…

I’ve had numerous snake encounters over the years from the rainforests of West Africa to the rattlesnake country of the American West. Believe me when I say there is nothing like stepping on a log and having it come alive with the buzz of rattlesnakes. I once set an Olympic record for the standing long jump when that happened.

The Jornada Mogollon people of the Three Rivers Petroglyph site must have had a special relationship with snakes. There are numerous snake glyphs scattered throughout the area— and these are BIG snakes with BIG heads and jaws. “The better to bite you with my dear.” I suspect the snakes were considered sacred and worshipped, which is what the nearby Navajo and Hopi people did.

Another rattler. Obviously, the artist wanted to emphasize the business part of the snake— its head. 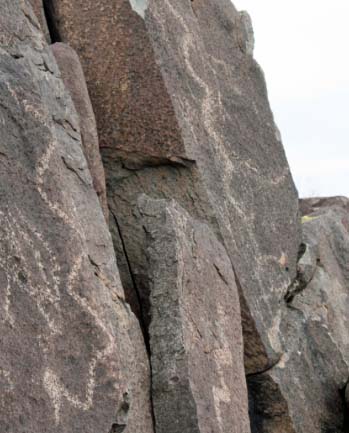 In one place, we found several snakes slithering down the rocks, which was a bit creepy-crawly!

Rattlesnakes aren’t the only poisonous denizens of the desert recorded by the petroglyphs found at Three Rivers. There are also spiders and scorpions. There was a good reason that cowboys of the Old West always shook out their boots in the morning before putting them on. On the more benign side of the equation, there are a number of rock art lizards.

For the record, Peggy and I always shake out our outdoor shoes before putting them on as well. We’ve never found a scorpion, but spiders are common, and lizards. Peggy once wore her boots for an hour wondering why her foot had developed a toe twitch. She took it off and a lizard hit the ground— running. It still may be. 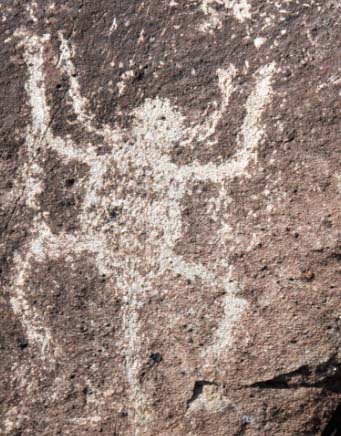 Scorpions pack a considerable wallop in their tails. It’s best to keep out of their reach. 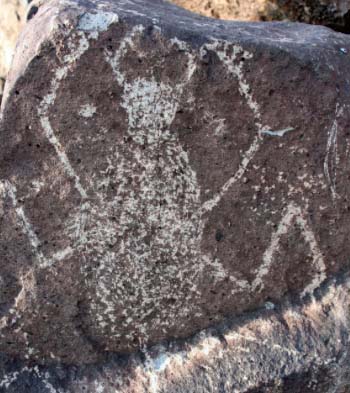 I’m assuming that this guy is a spider, although it could use some more legs. Artistic license, perhaps? Or maybe it’s a beetle.

We’ve found petroglyphs of lizards in almost every rock art site we have visited throughout the Southwest. This one came with a crooked tail.

This is one of our local lizards that live around our house and think of our shoes as a great place to hang out. It’s my last photo of the day.

NEXT POST: A Land of Forest Giants… And Bigfoot.