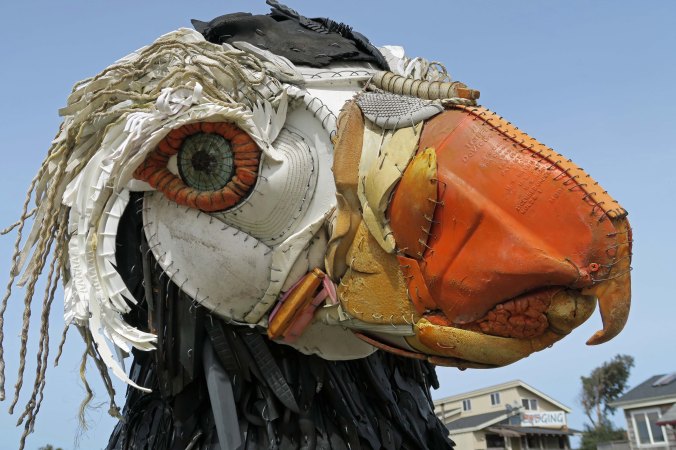 Trash gathered along the coastline near Bandon, Oregon is turned into art by the nonprofit organization, Washed Ashore. In this case, the artists have created a puffin.

Here’s something to think about:

A study carried out by the World Economic Forum and Ellen MacArthur Foundation predicts that the plastic we are dumping into the ocean will weigh more than the fish in a short 30 years. While most of this plastic circles the ocean as sludge following currents known as gyres, a significant amount washes up on our beaches creating hazards for wildlife and visual pollution for the rest of us. Even the most pristine locations fall victim to this onslaught.

When Peggy and I drove into the small town of Bandon on the coast of Oregon two weeks ago, we spotted several colorful sculptures of marine life that immediately caught out attention. On closer inspection, we found out they were made out of trash collected from the local beaches and turned into sculptures by a local organization named Washed Ashore.

The non-profit is the creation of Bandon artist Angela Haseltine Pozzi who decided to do something about the pollution that was cluttering local beaches in 2010 and begin turning the trash into art.

“First you just want people to stop and look at the art,” Angela noted. “And then you want to have them stop and think about the problem.”

It certainly worked with us.

Today, hundreds of volunteers join with Angela and her staff in creating sculptures that travel the country and even the world creating awareness about our use of the oceans as a garbage dump. Last year, a number of Washed Ashore’s sea creatures even made it to the Smithsonian National Zoo in Washington DC.

This delightful fish is another example of Washed Ashore’s artistic endeavors. Note the old phone on the fish’s nose right above the child’s sand shovel.

Here is the puffin featured at the beginning of the post… 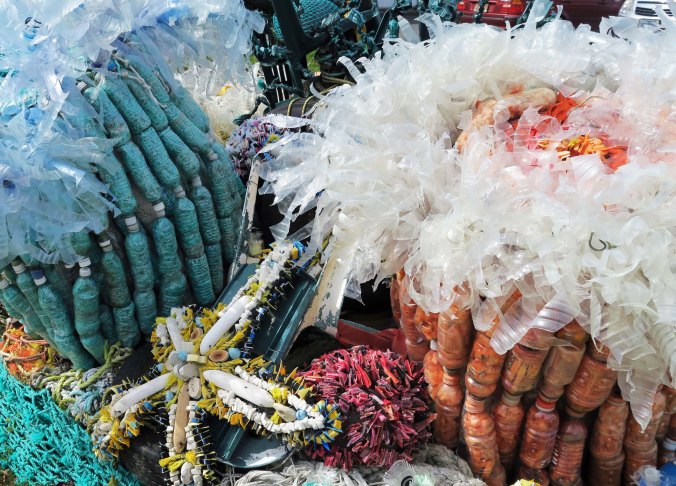 And this is a view of tide pool life created from trash. 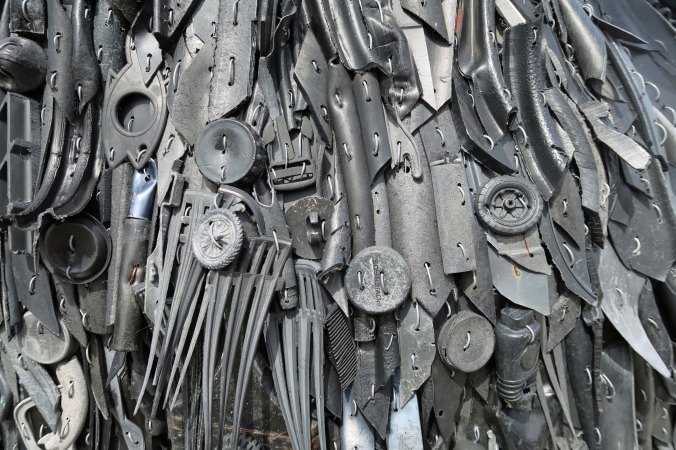 A closeup of the feathers on the puffin’s chest.

A head on view of the fish with it’s scary teeth and trashy mouth.

Peggy, who always makes sure that her trash is properly disposed of and recycled, can stick her hand in the fish’s mouth without any fear of retribution.

But here’s what it might be like if she dumped her trash in the ocean! (She really is a good sport when serving as a model. “Look like it is biting you,” I had told her.)

Most towns along the Oregon coast spread out along Highway 101 like strip malls and feature the same motels, gas stations and fast food joints you can expect to find anywhere else in the US. Peggy and I have discovered, however, that most of these small communities also had the foresight to save their historic districts. These in turn have become attractions for tourists, a source of important jobs and dollars. 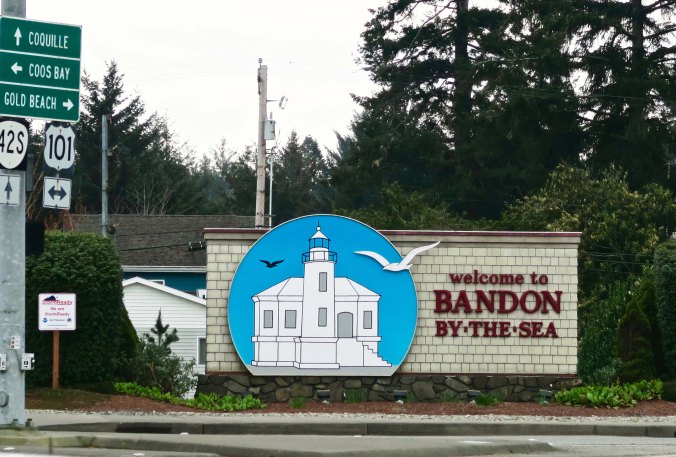 Bandon welcomes visitors and provides activities that range from walking on its beautiful beaches, to shopping and eating in town, to playing golf on some of Oregon’s finest golf courses.

The other side of this sign over Bandon’s main street welcomes you to Old Town. This side looks out on busy Highway 101 from the historic district.

Such is the case with Bandon. Peggy and I wandered around Old Town and did our bit for the local economy. We bought books in a fun little bookstore, nibbled our way through a chocolate store, and quaffed a couple of pints of Guinness at an Irish pub. We even checked out a store that is dedicated to producing and selling candy made with cranberries. It turns out that Bandon grows over 90% of Oregon’s cranberry crop and 5% of the nation’s! 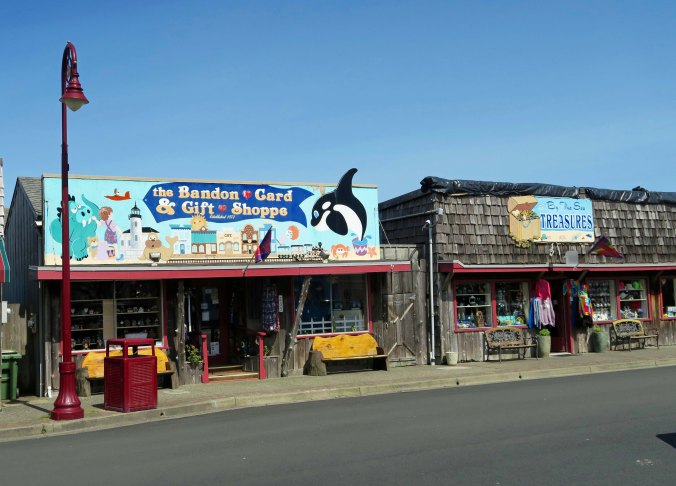 I would describe the Old Town area as fun and funky. The nature of the original town has been preserved without pretensions.

As you might imagine, the town’s access to the ocean guarantees an abundance of fresh seafood. I liked the sense of humor reflected by the fish.

An attractive boardwalk featuring several works of art fronts the Coquille River and forms the northern border to Old Town. We concluded our visit to Bandon by strolling along the walkway, checking out the marina, and admiring the art.

A world globe we found on Brandon’s Boardwalk conveniently located where we were. 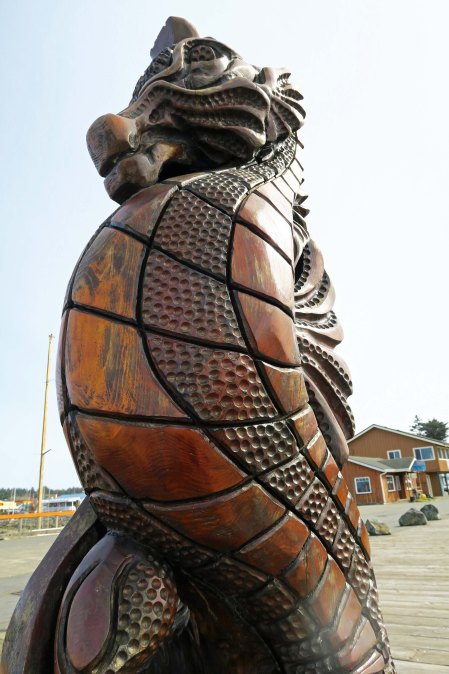 A regal seahorse checked us out… 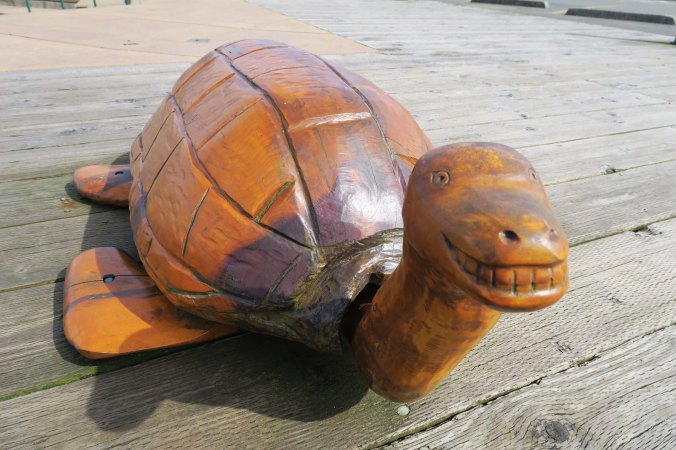 A carved turtle grinned at us… 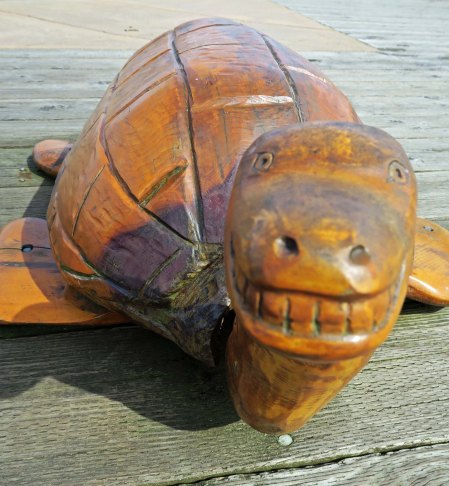 And led me to focus in on its smile. 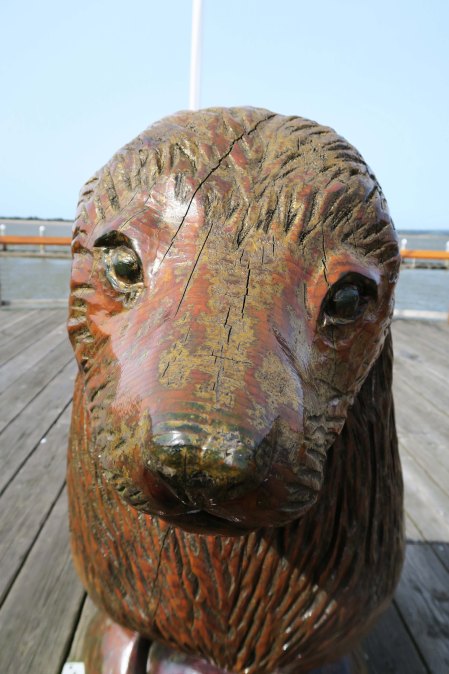 Gave us a look that seemed to say, “Feed me a fish, please.”

And a crab did what crabs do so well— look crabby. 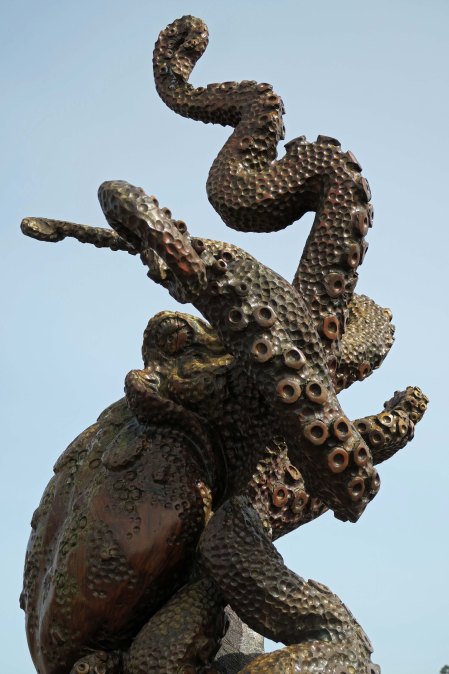 My favorite, however, was this octopus. I took several shots. 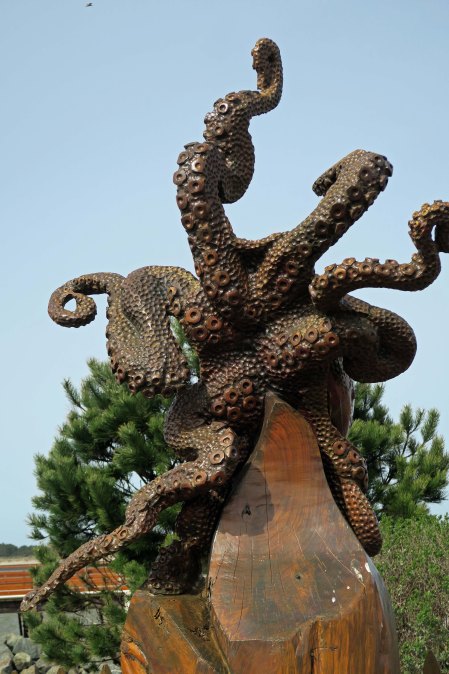 Back lit by the sun, he looked a little scary, like something out of 20,000 Leagues Under the Sea.

I decided to use my last photo to introduce my next post on Bandon (next Monday). Peggy and I will cross the Coquille River to check out this lighthouse and the ocean beach next to it. We are looking at the lighthouse from Bandon’s Boardwalk.

Wednesday: I begin a three-part series that focuses on a backpack trip near Lake Tahoe where we found Bone.

Friday: I will continue my photo essays on the art of Burning Man.

Monday: I’ll wrap up the Bandon, Oregon series with a trip to the Coquille Lighthouse and the surrounding area.