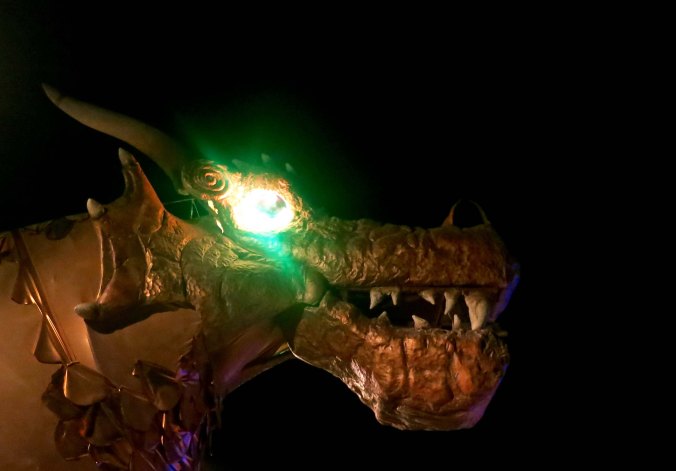 If Donald Trump had stared out his window and seen this fellow staring back, do you think it would have changed history?

Today I am kicking off my Friday photo-essay series on Burning Man. Last week I went through the thousands of photos I have taken since I first went in 2004 and winnowed them down to a mere 4,000. (grin) I suspect you will see a few hundred of them on Fridays over the next six months leading up to the event.

I had a long discussion with myself over what to start this series with. “What are you talking to yourself about?” Peggy had asked worriedly. Mutant Vehicles won out. I love the variety: from dragons to bugs to ships to rhinos to cats to Mad Max wannabes— Burning Man has them all!

Peggy and I share photo taking responsibilities at Burning Man but we also have help from fellow members of the Horse Bone Tribe: Don Green, Tom Lovering and Ken Lake. I’ll try to credit Don, Tom and Ken, but if I miss a few, my apologies.

Let’s start with Abraxas,  a 60-foot dragon equipped with a 10,000-watt sound system. Normally, Abraxas hangs out at Burning Man, but on November 11 (right after the election) he was in Washington DC on the Mall. I wonder if the new president looked out his window and saw him. Probably not. There weren’t any tweets. 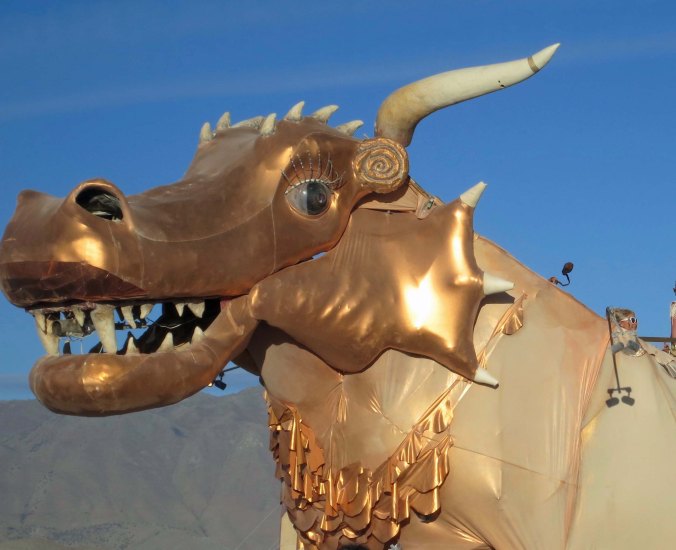 What would Trump have tweeted about Abraxas? Any ideas? 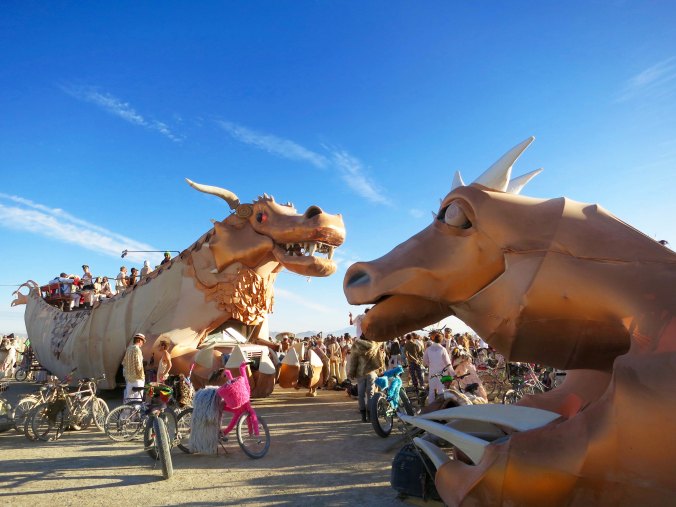 Abraxas has been going to Burning Man for a number of years. In 2016, he showed up with a baby. 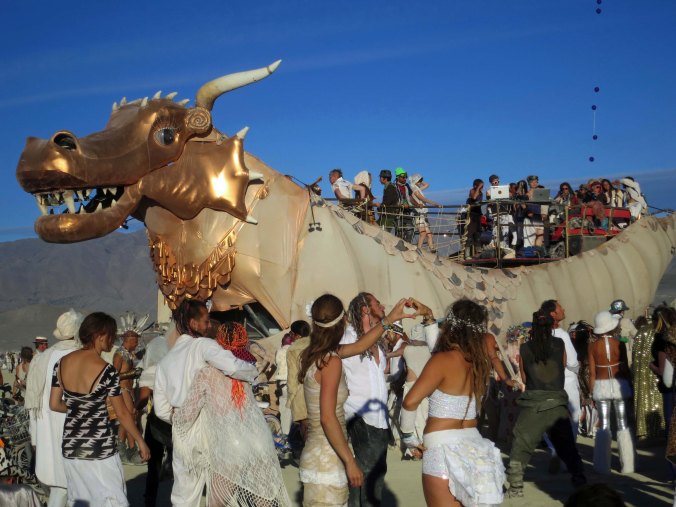 Early in the morning before sunrise, Abraxas likes to hang out at the Temple, you can see him lurking out on the Playa. When the sun comes up, it is time to dance, however, and he fires up his 10,000 watt speakers as Burners gather around. 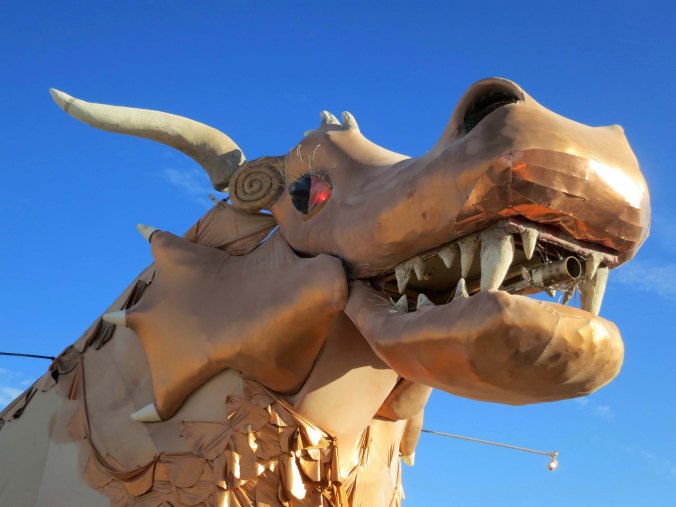 Another close-up of Abraxas. The tube coming out of his mouth spits out fire at night. 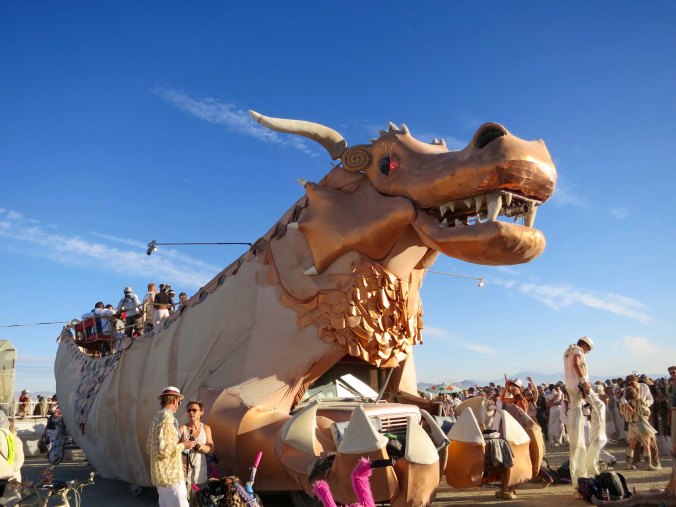 Check out the claws! 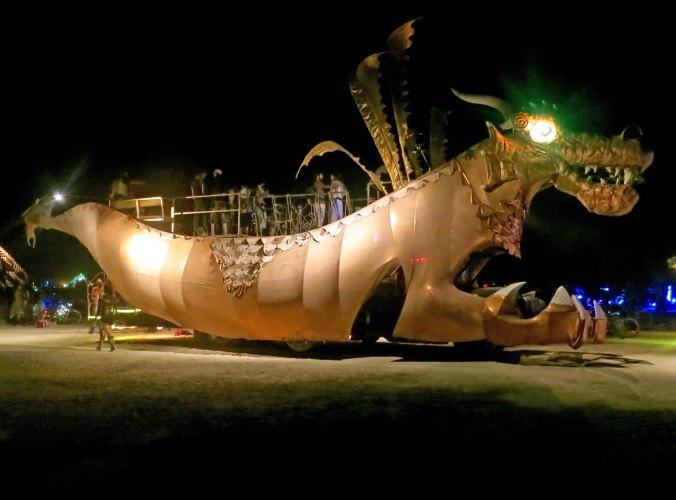 Mutant vehicles at Burning Man take on a different look/personality at night. Here, Abraxas was getting ready to go out and party the night away. You may have noted the different faces. Most years,  Abraxas comes back to Burning Man with a new look.

The golden dragon is one of hundreds of mutant vehicles/art cars found at Burning Man each year. While you are required to park your car, truck, RV, etc. at your camp and leave it parked, mutant vehicles are free to roam the playa and Black Rock City, assuming they have a permit. Today I am going to also feature a warthog, a lion, an angler fish, a lizard dragon, a mammoth and traveling bar. There will be more next Friday! 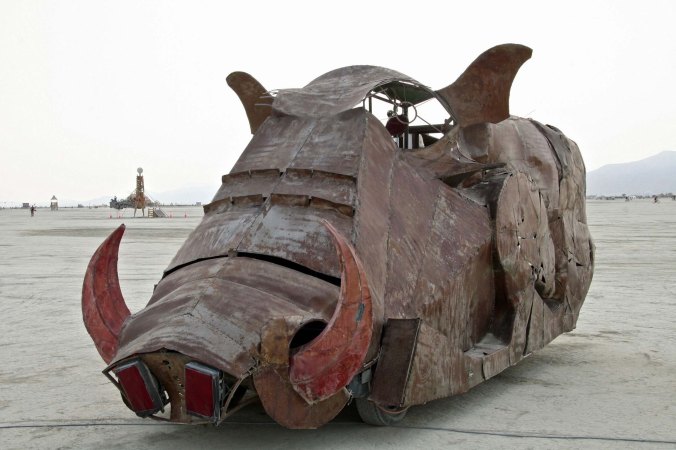 This warthog is a favorite of mine. 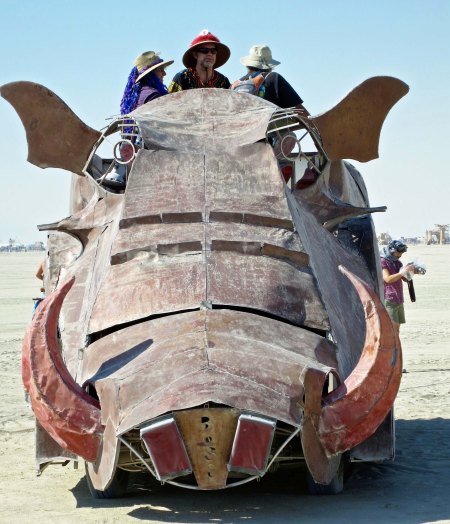 Head on! Check out the tusks. 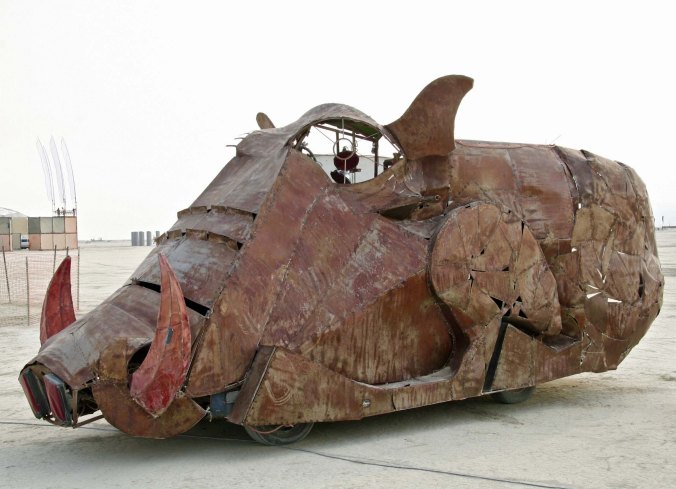 And a side view. I think he is kind of cute. I once followed a warthog and her kids across the Serengeti Plains in Africa. Mom and kids all had their tails sticking straight up in the air. 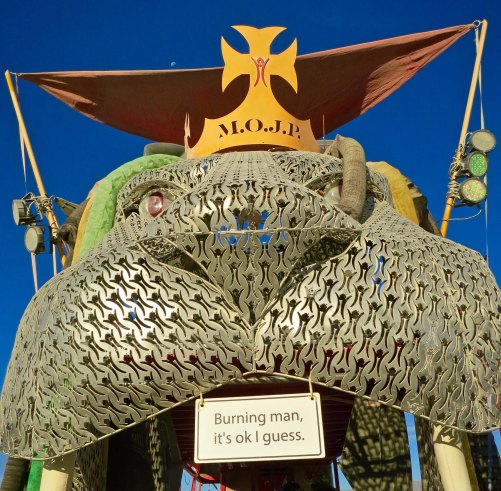 Burning Man is okay, huh. Are you ready for some reggae? The M.O.J.P. is taken from Bob Marley’s song, Exodus, and stands for “Movement of jah People.” 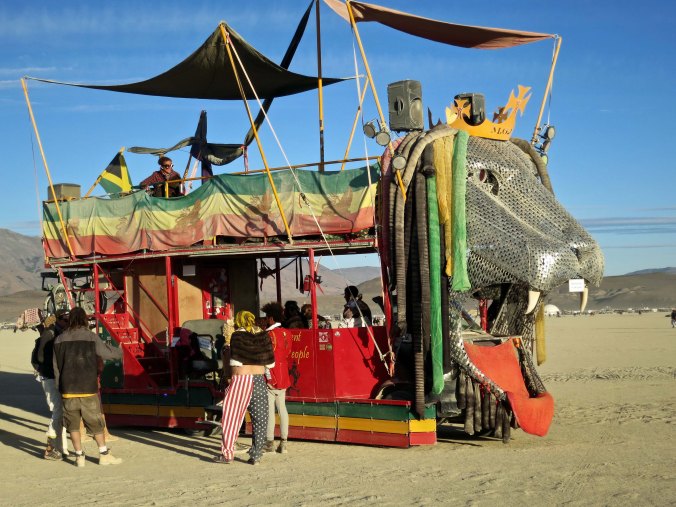 A side view of M.O.J.P., which I assume is a lion. Note the big mouth. 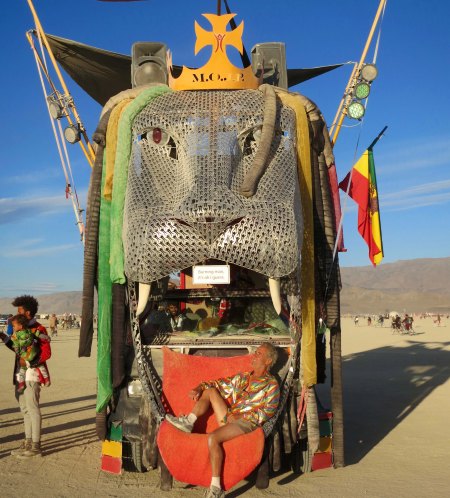 My friend Tom Lovering found it quite comfortable. M.O.J.P., BTW, was once an RV. 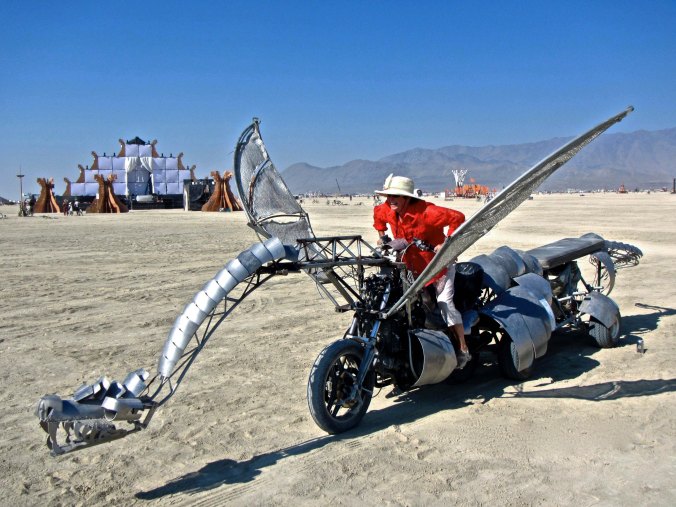 Peggy found this small but ferocious looking dragon out on the Playa and climbed aboard. Fortunately it was missing keys. Otherwise I still might be searching for her. 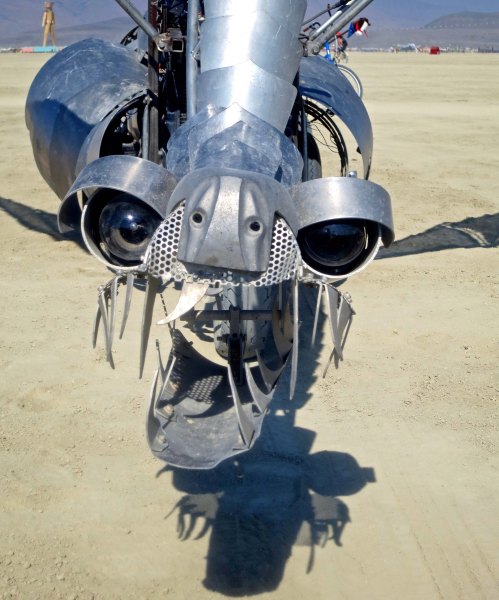 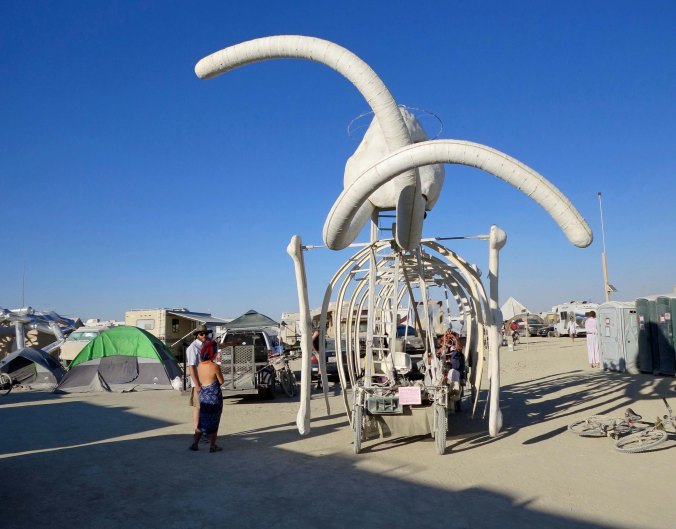 Somebody had a twisted sense of humor when it came to creating this Mammoth art car. 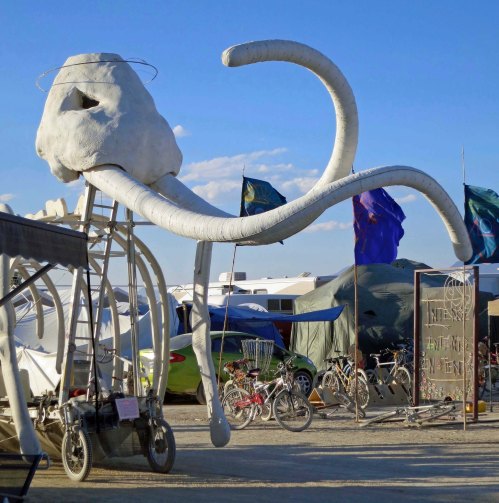 A side view of the mammoth’s head and tusks. I wonder if the wire around the head is supposed to be a halo? 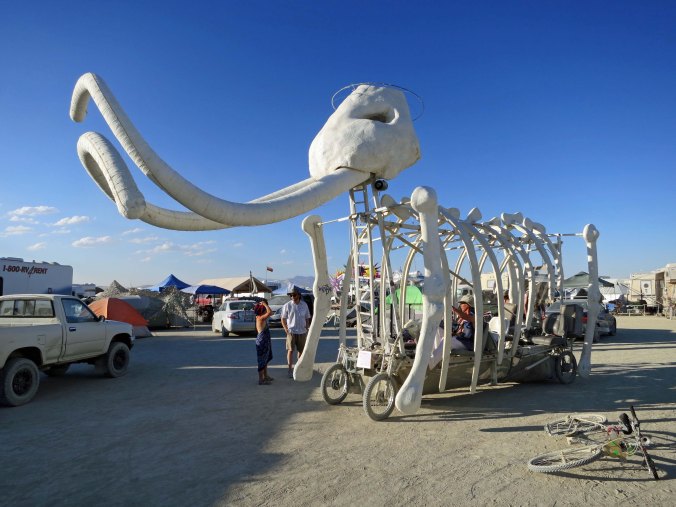 A full view of the mammoth. 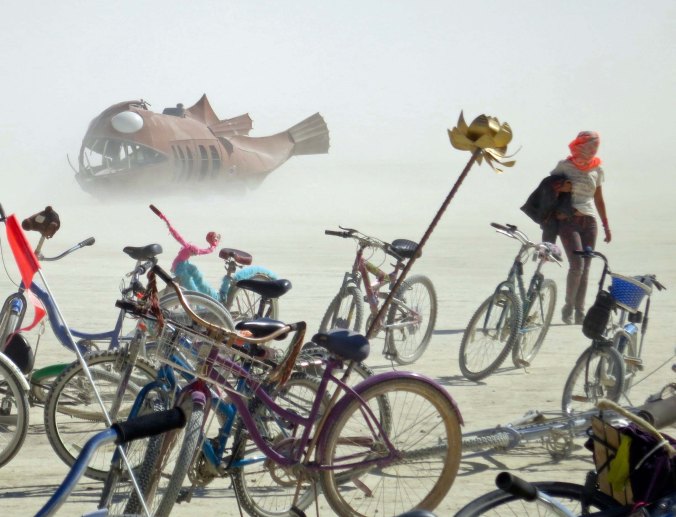 Whoa! If I didn’t have a clue about what was happening and saw this creature drifting by in a dust storm, I would be looking for the nearest exit. 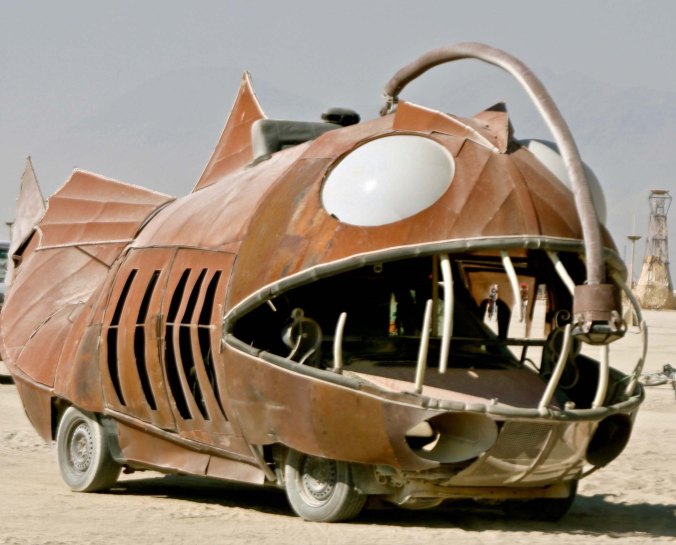 Here’s the angler fish up close and personal. In nature, angler fish use the nose dangly as bait for attracting prey. Great teeth. 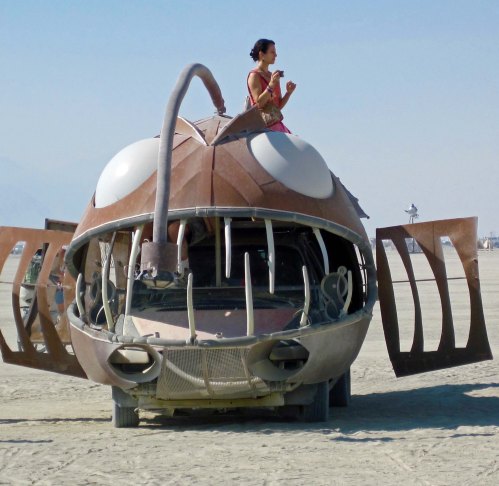 How the fish might look just before it chomped down on you. 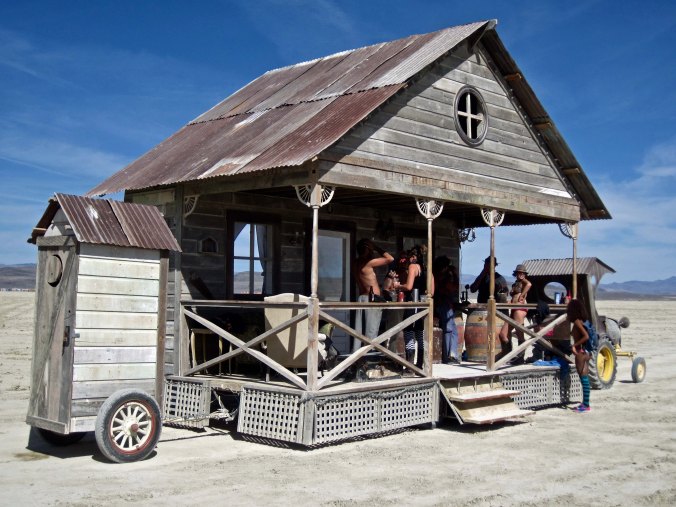 I’ll conclude today with four photos of  the Playa’s wandering bar complete with outhouse. Wandering around through the desert can give a person quite a thirst! (Photo by Tom Lovering.) 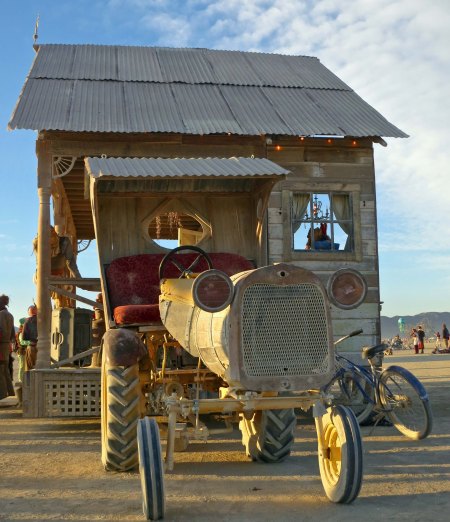 This tractor pulls the bar around. 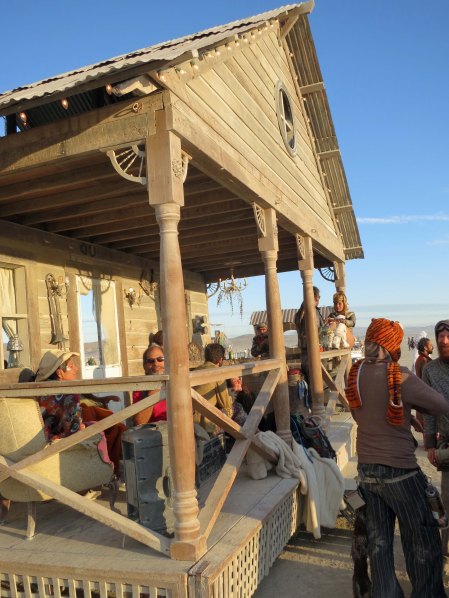 Action at the bar! Tom and I stopped for a taste of moonshine. It was potent stuff! 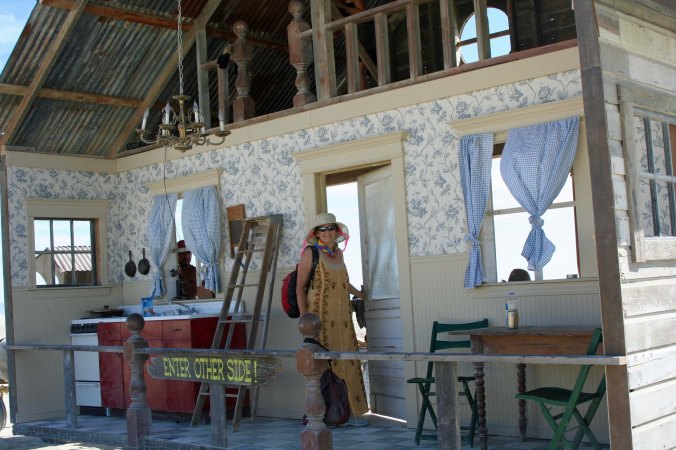 Peggy walked through the bar’s door and came out in this kitchen!

Friday: My next post on the mutant vehicles of Burning Man.

44 thoughts on “A 60-foot Fire-Breathing Dragon Roars into Washington— 3 Days after the Election… The Mutant Vehicles of Burning Man: Part 1”