I met my first Brown Bear in Katmai National Park, which is at the beginning of the Aleutian Peninsula. He was coming down a trail I was walking up. He and I had a discussion and then I slowly backed away. Never run from a bear unless you are hiking with someone slower than you are. (grin)

Peggy and I are off in Alaska as you read this blog. Since I won’t have time for blogging or reading blogs, I decided to repost a few blogs from the trip we made to Alaska three years ago. If you have been following me for a while, you will have read these blogs previously. I will try to respond to comments. –Curt

Back in the 1980s, I spent three years living in Alaska and dedicated as much time as I could to wandering in the woods. Along the way I met most of the wildlife Alaska is famous for. A grizzly bear stalked me on the Kenai Peninsula. I went to sleep listening to wolves howl on a winter cross-country ski trip in Denali National Park. Even more entertaining, a pair of Dahl Sheep had a head-butting contest in my campsite in Chugach State Park.

You don’t have to disappear into the vast wilderness of Alaska to encounter animals with big teeth, claws and antlers, however. Our friends Edith Barrowclough and David  McElroy reported that both a black bear and a moose wandered through their yard in Anchorage over the weekend. They have also seen a wolf and a lynx in the area. 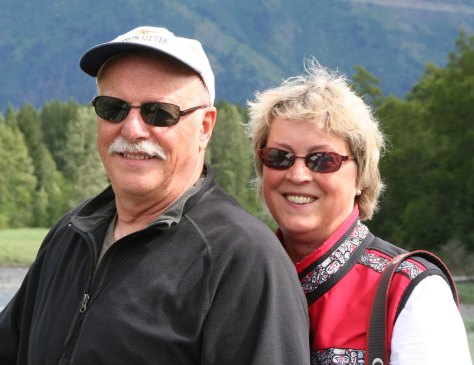 Our friends David and Edie. Edie went to high school with Peggy in Port Clinton, Ohio. She now works as a CPA in Anchorage. Her husband, David, is a pilot working on the North Slope and a published poet. (Photo by Peggy Mekemson.)

Peggy and I stayed with them for four days. Every time Chula the Dog barked Peggy darted outside in hopes of spotting something large and furry. All she saw was the neighbor’s dog but we did end up seeing our share of wild animals. David and Edie insisted on taking us to the Alaska Wildlife Conservation Center at the southern end of Turnagain Sound. The Center serves as a wildlife sanctuary and is designed to duplicate the animals’ natural surroundings. They have done a good job. The photos in this blog were taken there.

Our trip down Turnagain Arm to the sanctuary was a trip down memory lane for me. It was one of my favorite drives when I lived in Alaska.

A shot of the railroad tracks running along Turnagain Sound. The V in the mountains on the right is where the town of Hope is located. Hope was the starting point for 100 mile backpack trips I led across the Kenai Peninsula.

Black bears are smaller than their cousins. I once woke up with one standing on my chest in Yosemite. I screamed loudly. You may have heard me. This guy was about to join his companion in the cave. 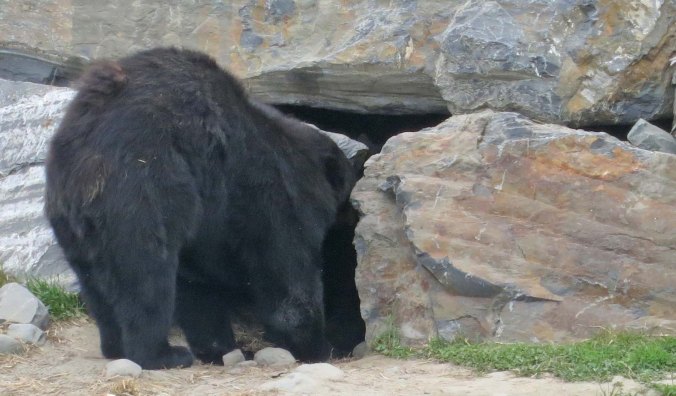 Our first view of the Brown Bears was of one playing in the water throwing a moose bone into the air. (Photo by Peggy Mekemson)

Here he catches the bone with one paw while pointing out his skill with the other. He didn’t have to persuade us.

My, what big teeth you have. And no, we have no intention of taking away your bone. (Photo by Peggy Mekemson)

Check out the claws on this guy. 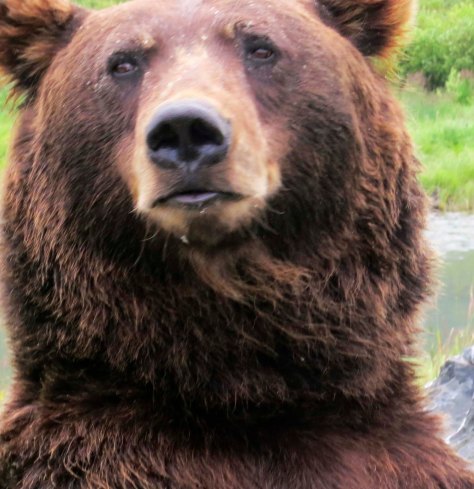 My grandson Connor insisted I include this head shot I took of one of the Brown Bears. The bear was sitting up. 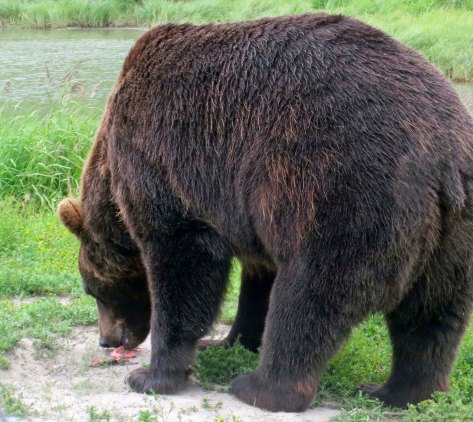 I thought I would conclude with this photo because it emphasizes just how big Alaskan Brown Bears become on their diet of salmon. A large male can weigh up to 1200 pounds.

34 thoughts on “Encountering BIG Brown Bears and other Alaskan Wildlife…”