The old vendor’s face, wrinkled with decades of toil, was backlit by a strong sun.

The old man waved beaded bracelets and necklaces as us. We were having lunch at la Palapa and a tasty red snapper was demanding my attention. I couldn’t have cared less about the beads. In fact, I was irritated by the interruption— by the constant interruptions as one after another street/beach vendor rudely shook his or her wares at us, demanding our attention and dollars.

But the face of the old man— the deep wrinkles and lines, the scraggly whiskers, the cloudy eyes: the character— it caught me. I broke out my camera and ten pesos. I wasn’t going to buy trinkets; I was paying for a likeness, a reflection of life and how hard it can be, but also capturing a certain beauty, won by years of struggle.

A blanket vendor also insisted on showing us her wares as we ate lunch. The bright sun behind her made photography difficult but it helped capture the rich colors of her blankets.

Puerto Vallarta is a tourist town. Its primary source of income is the thousands of people who are disgorged weekly from airplanes and giant cruise ships. The challenge, from a purely economic perspective, is how to sort the visitors from their cash before they leave, to get a piece of the action. Hustle is the name of the game, from the small girl selling Chiclets for pennies to the timeshare salesperson selling future vacations for 25 thousand dollars. The small girl has only her haunted eyes to push her product; the timeshare salesman has a whole arsenal of half-truths and a tenacity that would put a tick to shame.

(While I write this post, I realize that it will be published on Black Friday, the day that America’s merchants are desperately hoping to sort Americans from their cash. When I turn the TV on, it is one continuous ad— marketers rudely shaking their products in our faces with half-truths that would put a timeshare salesman to shame.)

An hour of relaxing on the beautiful Banderas Bay beach in front of the Krystal Hotel is like an hour lesson in basic capitalism. Beach vendors are specialists. Whether you need a shirt, a dress, a hat, a ring, a necklace, a tattoo, a trip, a cigar, a massage, a woodcarving, a drink, dark glasses, a blanket, or food (or not), someone will be there to sell it to you. The hat man has hats perched on top of his head as high as they will go. The blanket sales vendor a stack of blankets a yard thick. The henna tattoo guy comes at you with a book of tattoos to pick from. Will it be a Harley or a harlot? A polite, no gratias, usually sends them all on their way, at least for the moment. But show a bit of interest and they descend like buzzards, ready to pick your wallet, if not your bones, clean.

Peggy is the shopper in our family. She bought a small turtle, iguana, and beaded eggs from a Huichol artist, two gorgeous tablecloths at the Municipal Market, and a silver necklace from a beach vendor. Peggy had recognized the beach vendor from years past.

Ernesto, a Huichol artist, has a bright smile for us whenever we stop by. If he doesn’t have what we want, he makes it for us. The brightly decorated eggs (lower-center) are covered with Huichol symbols and will be decorating our son’s Christmas tree.

Peggy checks out a new table-cloth she is buying. The day before we had checked it out and Peggy had mentioned she wanted the edges finished. The young woman took the tablecloth home that night and did the work— on three table cloths. We ended up buying two.

Felix, as in Felix the Cat, displays his bracelets and necklace pendants on the beach in front of the Krystal Hotel.

“Do you remember my name?” he asked. “It’s Felix, like in Felix the Cat. Meow.” I particularly liked the meow and meowed back. While Felix was entertaining us with his patter, he had opened his box of silver jewelry. Peggy showed a spark of interest in two necklaces. “Which do you like?” Peggy asked, turning to me. Felix knew he had her. “I’ll sell you both for 1400 pesos,” he offered. “Too much,” Peggy responded. “How much will you pay?” he asked. We had entered the negotiation stage. The general rule of thumb is about 50% of the asking price. Vendors double the price, and add a bit for profit. We ended up only buying one and paying too much. Felix left with a large smile.

Large public markets are a step up from the beach in terms of sheer quantity. A walk through the Municipal Market (Mercado Municipal) will introduce you to dozens of vendors, each with his or her own space packed to the ceiling. All are trying to entice you in. “I make you good deal.” “Half price.” “Almost free.” “Look will cost you nothing.” “Two for one happy hour cost.” And on and on, over and over. One vendor on the Rio Cuale asked, “Want to buy some junk?” It was a welcome and humorous change.

Vendors stalls at the Municipal Market next to the Rio Cuale are stuffed to the ceiling with items designed to capture a tourist’s attention. It quickly becomes overwhelming unless you are shopping for something specific.

The market is two stories high and must contain at least a hundred stalls… each with one or more vendors urging you to check out their goods.

My friend Ken Lake and I were wandering through the market at the seaport while Peggy and Leslie were having massages when we received a different offer. Ken was using the line, “We have to wait for our wives,” to put off vendors.

A rather short and squat, older woman responded, “Who needs wives? I have a sister. Only $50. I have two sisters, one for each of you.”

“For $50,” I asked as Ken made a hasty retreat. “No, no. $50 each,” she insisted as the eyed the rapidly disappearing Lake. “You could have two at once. Much fun.” She said laughing. “Mañana,” I responded as I hurried to catch my friend before he disappeared.

The most intriguing market, it turns out, was right across from our hotel. We had visited years earlier and I hadn’t been impressed. This time was different. Peggy, Ken and Leslie had gone across the road for a visit while I was working on a blog. She came back saying I had to go. Turns out, the place is a huge furniture market, with the furniture being made on site. But that’s only the beginning. It’s an interior decorators dream, packed with thousands of items. I walked around in awe for two hours, going from room to room. And there was no pressure to buy. Not one salesperson approached us unless we had a question. I was so appreciative I was tempted to buy a 20 foot table as a thank you. 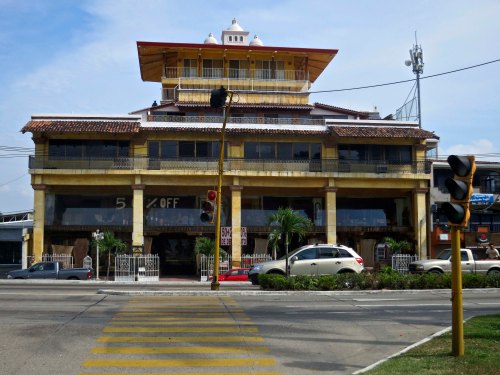 The furniture store as seen across the street from our hotel. It must have has several thousand feet of display space.

This large slab of wood is destined to be turned into a table! Can you imagine the size of the house you would need to accommodate it? Do you own a castle? 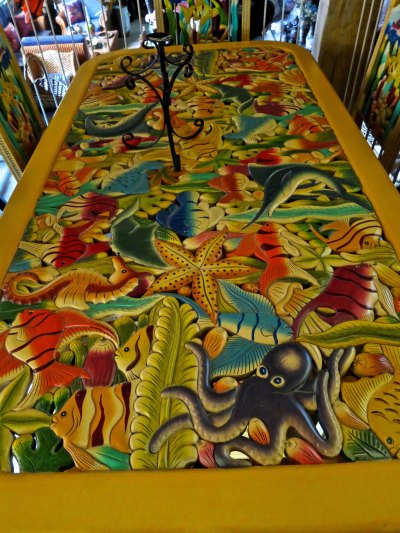 I would love to have a table like this. You would never be at a lack for conversation when you had guests over. The chairs were equally delightful.

Peggy came and rooted me out of one of the rooms I was wandering through to look at this chest.

There was also this full sized horse. It must have gone with the 20 foot table and the castle to put it in.

Along with these musical frogs.

For all of the large pieces in the store, there were dozens of smaller works. This old woman with her wrinkles reminded me of the old vendor I kicked off this post with. It’s a fitting place to end.

NEXT BLOG: The fine art of shape shifting in Mexico. Jaguars are really popular when it comes to turning yourself into an animal. What would you become?