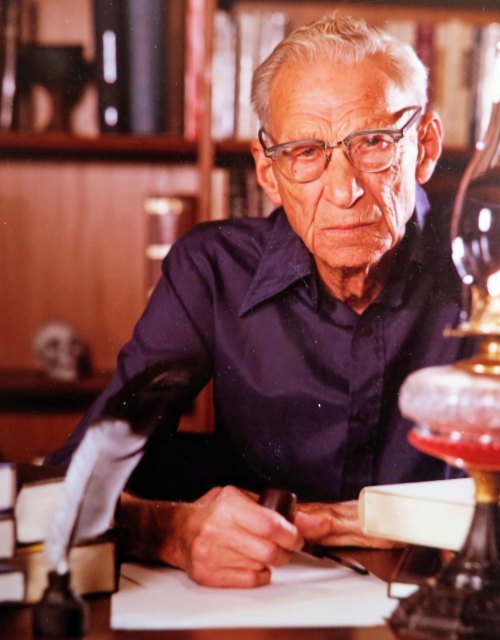 One of my favorite photos of my father taken by Glen Fishback at his studio.

Do you believe in ghosts? I’d like to say I don’t. Their existence isn’t rational. There is no scientific evidence that supports their presence. And yet, I’ve had a couple of ghostly experiences that are hard to explain rationally, other than my mind playing tricks (a distinct possibility). But consider the following:

In my last Friday essay on religion, I took readers to Alaska and a campfire discussion with my father. Pop lived for another eight years— and they were good years. He continued to read his Bible, smoke his pipe, paint pictures, and entertain the elderly women in his retirement complex with the photographs he had taken over the years. We had lots of opportunities to talk. I learned a great deal of his past and he never gave up trying to convert me.

Pop painted up until he was 85 or so. (Photo by Glen Fishback.) 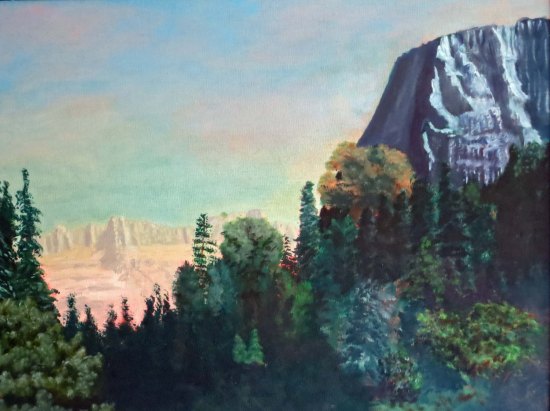 The painting that Pop was working on now hangs in our guest bedroom.

One night I had him over for dinner to meet my new friend and future wife, Peggy. She charmed him as much as she had charmed me. I had already told him I planned on marrying her if I could persuade her to say yes. When I took him home, we shook hands at his doorway and, purely out of instinct, I said, “I love you Pop.” He got one of his big grins and responded, “I love you, too, Curt.”

A week later I found him sitting naked on his toilet, dead from a massive heart attack.

Of course I was grief-stricken. His passing was the passing of one of the most significant parts of my life. And I also felt guilt. I had known he wasn’t feeling well when I left him that night. I’d called a couple of times and he hadn’t answered, but I had assumed he had just been out on one of his walks. I couldn’t help but think if I had stopped by that I might have made a difference. Still, he had lived a full and productive life, taken care of himself to the end, and gone out quickly. It’s hard to ask for more.

The next day I went over to clean things up. I probably shouldn’t have gone alone because I was so stressed. I was in the bathroom cleaning when a light in the front room went on. I went out, thinking maybe the building manager had come by. No one was there. I went back to the bathroom where I had left a faucet on. Just as I walked in it jumped from a trickle to full force. The errant light and faucet shook me up; I grabbed my things and departed, quickly. That night I left the lights on in my apartment. It had been ages since I feared things that go bump in the night, but why take chances.

Just as I was finally drifting off to sleep from exhaustion, I heard a voice in my head. It was Pop. “I am alright Curt,” he said. “It’s okay.” And then I saw a vision of the proverbial white tunnel. It wasn’t a light at the end of the tunnel; it was the complete tunnel, the whole shebang— Pop’s spaceship. Were the light in his front room, the faucet, and the voice results of natural causes and my overwrought imagination? Probably. But who knows? Who knows what awaits us when the final bell rings? Maybe it’s a one-way ticket through the Universe.

Afterwards, when I thought about the experience, I was a little amused that Pop hadn’t taken advantage of the moment to say, “Read your Bible, Curt.” I would have started immediately. But maybe it wasn’t necessary. Maybe other fuel drove his spaceship.

In this series of essays, I have not argued against religion, I have argued against the abuse of religion. I have contended that the ‘leap of faith’ required by religions, combined with the concept of exclusivity (there is only one way to get to heaven), make abuse possible and even likely. Holding the keys to eternal life provides the holder with tremendous power. It’s something to die for. This power is an almost irresistible magnet to those who crave and need power for any number of reasons ranging from the sublime to the outrageous, from serving the flock to fleecing it, from helping the helpless to offing the opposition. When combined with fanaticism and government support, this mixture can quickly become a dangerous and deadly brew.

Religion has the power to do much good. I used my own personal example of how the Episcopal Church helped me get through difficult teenage years. I have a minister friend, the woman who married Peggy and me, who is known as the Disaster Pastor. She devotes her life to helping out where help is most needed, and has the full support of her congregation. My fellow blogger friend Bill, at Practicing Resurrection, is using his faith to encourage wholesome and humane farming practices, and healthy eating. Pope Francis is undertaking a major environmental initiative. There are thousands of examples.

To me, the greatest role religion can play is to enable us to see beyond ourselves, to understand that on some deep level we are all connected, not only to other human beings but to all life. Our salvation as a species lies in realizing that all of life is sacred and acting accordingly. Few of us have the capacity for sainthood but most of us have the capacity to see a bit further beyond ourselves than we normally do, and think through the long-term implications of our actions— whether it is being unkind, marching off to war, or wiping out another species.

I believe that the easiest way to counteract the negative aspects of religion is to modify the concept of exclusivity. Simply put, it’s okay for us to believe that the path we have chosen will take us toward whatever afterlife has to offer, but we also need to recognize that someone else’s path may be equally valid. Religious tolerance would eliminate one of the primary causes of conflict in the world today. Freedom of religion and separation of church and state are essential to obtaining this objective. Maybe the day will come when people of different religious beliefs (or none), can live next to each other in peace and prosperity throughout the world.

I’ll let Pop get a final word in. He once told me that he regarded his extensive reading of the Bible as an insurance policy. If he were right, it was his key to the afterlife. If he were wrong, what’s the harm? I granted him that. But I countered with the opposite argument. What if he were wrong? What if this is all we have? Then life becomes incredibly important. Each moment is precious. Yes, practice your religion if it is significant to you— read your Koran or Bible or Bhagavad Gita— but live each moment as though it were your last. Be kind, make sure that your loved ones know that you love them, give back to the community, have adventures, expand your mind, practice tolerance, and be passionate.  If there is more after the curtain falls, wonderful. If not, you have lived your life fully and can die knowing that you achieved everything humanly possible from your brief time on this earth. What’s the harm?

NEXT WEEK: Monday’s Blog: A neighborhood goat feast. You’ll meet a clothed Rambo and a naked Pinky. Wednesday’s Photo Essay: I return to the magical island of Santorini. Friday’s Essay: How twenty-five cents saved one million lives and $134 billion in health care costs. Part I.

32 thoughts on “Speaking of Afterlife, Did Pop Actually Haunt Me?”