Socrates was not actually built for backpacking but he loved it. His grand daddy, so his papers claimed, had been the American-Canadian grand champion for his class. Check out his digging paws!

I’ve been following a fun blog called Animal Couriers where these folks travel around Europe delivering pets to people. They were just in Greece and that reminded me of a Basset Hound I once owned named Socrates. Or maybe he owned me. It was hard to tell at times. Anyway, Greece plus dog brought Socrates to mind.

About the time Socrates came into my life, I took up backpacking. Naturally I decided that Soc should go backpacking with me– you know, a guy and his dog. So off we went to my all-time favorite spot in the Sierra Nevada Mountains of California, a small lake basin that had been carved out by glaciers north of the I–80 Freeway half way between Sacramento and Reno.

This is one of five lakes snuggled down in a small glacier carved basin north of Interstate 80 in the northern Sierra-Nevada Mountains of California. This is the first area I ever backpacked and I have returned dozens of times over the years. The Black Buttes, which can be seen from I-80, are in the background.

Sharing the lake with Soc was close to being totally alone. His concept of a quality wilderness experience was disappearing into the woods and seeing how many holes he could dig. He never seemed to catch anything so I am not sure of his motivation. I’d get up in the morning and cover his handiwork. I almost felt like I needed to file an environmental impact report. Socrates would end up limping back to the car with sore feet.

On this particular journey, I packed the Carlos Castaneda book that features things that go bump in the night. Don Juan takes Carlos out into the middle of the Sonoran Desert on a pitch-black night and abandons him. Not long afterwards, the monsters come hunting. It wasn’t the best book for a solo night in the woods. As I read into the evening, I found myself paying more attention than usual to wilderness sounds.

I ingested a little medicinal herb to lighten things up. It was the 70s, after all. Bad idea; instant paranoia set in. Soon I could hear the wind stalking me through the treetops. An old snag turned into a ghoul. Off in the distance something big and ugly was digging and snorting. Socrates, I hoped.

This long dead pine turned into a ghoul in my imagination. The mountains in the background are the Sierra Buttes.

“Come here!” I yelled. Still no response but now I could hear large claws scratching at granite.

“Does someone want a Milk Bone?” I added in a quiet, conversational voice.

The digging stopped. ‘Someone’ started coming through the brush toward me. Whatever it was, it was apparently interested in Milk Bones. Soc’s head, long body and wagging tail made their way into the firelight. He might love digging, but he loved food more. There was the reason why our low-slung pooch weighed 70 pounds.

“Good boy,” I said while digging out a Milk Bone. I knew I was buying companionship but it seemed like a good idea on this strange, dark night. Meanwhile, Socrates had started to drool in expectation. Soon he was shaking his head and shooting dog slobber off in a dozen directions. I ducked to avoid being slimed.

Unfortunately, my supply of Milk Bones was limited. I tied Soc up to assure his faithfulness. It was time for bed. I put the fire out and was greeted by a moonless, dark night. But hey, who needed the moon when I had my faithful companion and a million stars. I invited Socrates to snuggle up on my sleeping bag and laid my head down on the coat I was using for a pillow.

“Gads what’s that!” (A translation of what was actually said.)  I sat up straight and grabbed for my flashlight. Socrates joined in by barking at my sleeping bag.

“No, Soc, out there,” I urged and pointed the flashlight off into the woods. Soc glanced up at me with a curious ‘what are you talking about’ look and started barking at my pillow.

“Look Socrates,” I pleaded, “just pretend there is a garbage man out in the woods.” Soc had never met a garbage man he could resist barking at and I wanted his teeth pointed in the right direction.  What Soc did with my advice was make three dog circles and plop down on my bag. I gave up and reluctantly laid my head back down on my pillow.

I sat straight up again. Soc growled at me for disturbing his rest and started barking at my sleeping bag again.

“Fine watch dog you are,” I growled right back at him while straining my ears for the smallest of sounds. When Soc shut up, I was rewarded with a faint ‘crunch, crunch, crunch.’ It was coming from under the sleeping bag. I had a proverbial monster under my bed! Gradually it dawned on me that what I was hearing was a gopher tunneling his way through the ground, innocently on his way to some succulent root. I put my head down on my pillow. Sure enough, the ‘crunch’ became a ‘CRUNCH.’ The ground and the mystic weed were magnifying the sound. Soc had been right all along. I was lucky that he only barked at my sleeping bag and hadn’t started digging.

Don Juan would have appreciated how I had been tricked. Reality isn’t always what it seems. Following are a few photos I have taken of the Basin over the years. It’s an easy place to love.

The five lakes are small and intimate. This photo is from my campsite. 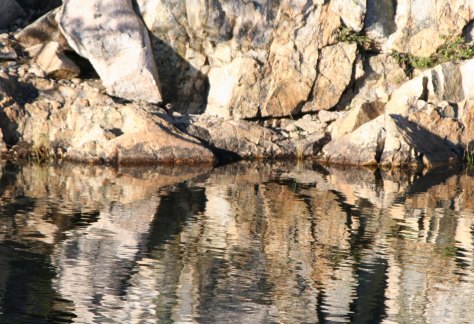 I camp out on a small peninsula. This reflection shot is also taken from my camp but looking in the opposite direction.

Junipers thrive in adverse conditions. And they make great snags.

I also liked this snag from what was probably a sugar pine tree. Granite rock forms the base of the Sierra’s. Socrates considered the rock as freeways.

Mariposa Lilies are a common flower of the Sierra Nevada Mountains. Both Native Americans and early pioneers considered their bulbs as food.

One of the first things I did when I met Peggy was introduce her to backpacking. (I took her on a 60 mile backpack trip.) Here she sits beside a small waterfall in the Five Lakes Basin.

I liked this pine tree silhouette against the fluffy clouds.

A golden sunset lights up the Black Buttes.

This dramatic sunset in the Five Lakes Basin was created by sun being filtered through smoke from a forest fire before lighting up the evening clouds.

NEXT BLOG: We return to Europe and Portugal.