Welcome to “The Dead Chicken Dance and Other Peace Corps Tales.” I am presently on a two month tour of the Mediterranean and other areas so I thought I would fill my blog space with one of the greatest adventures I have ever undertaken: a two-year tour as a Peace Corps Volunteer in Liberia, West Africa. Every two days I will post a new story in book format.

When I have finished, I will publish the book digitally and in print. 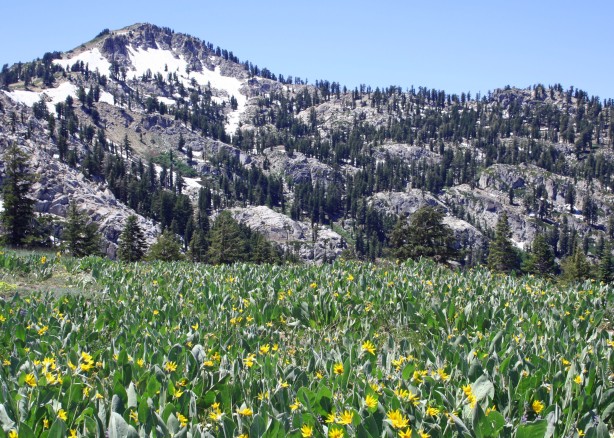 The Sierra Nevada Mountains about 20 miles south of where we did our training and at a slightly higher elevation.

Graduation from Berkeley, marriage in Auburn, a three-day honeymoon in Monterey, and reporting for Liberia VI Peace Corps training at San Francisco State College transpired in one whirlwind week.

My best man, Frank Martin, played his role superbly… from hosting the bachelor party at the Diamond Springs Hotel to making sure our escape car was appropriately decorated.

Frank grew up with me in Diamond Springs, California. We also attended Sierra College together. Somewhere along the line he discovered he was gay. Later on, he and his partner Hank would host several elegant but offbeat anniversary parties for us at their home on Clay Street in San Francisco.

Given our three-day honeymoon, Jo and I figured we would hold the record for newlyweds arriving at Peace Corps training. But we didn’t. One couple spent their honeymoon night flying out to the San Francisco State.

Upon arrival, the married couples were crammed into one wing of Merced Hall, a student dormitory. Tiny rooms, paper-thin walls and a communal bathroom became our new home. We soon knew a lot about each other.

Peace Corps staff wanted to know even more; Beebo the psychologist was assigned to follow us around and take notes. First, however, they pumped us full of gamma globulin and explained deselection. Our job was to decide whether Peace Corps was something we really wanted to do. Their job was to provide stress to help make the decision. Initially this came in the form of a SF State football coach hired to shape us up.

“Okay you guys, let’s see how fast you can run up and down the stadium steps five times!” I hadn’t liked that particular sport during my brief football career in high school and still didn’t.

Beyond mini-boot camp, our time was filled with attending classes designed to teach us about Liberia and elementary school education. We were even given a stint at practice teaching in South San Francisco. There wasn’t much for Beebo to write about.

In case Peace Corps missed anything, we were given a battery of psychological tests to probe our miscellaneous neuroses. These were followed by in-depth interviews. “Answer honestly. Say the first thing that pops into your mind.” Yeah, sure I will.

A few people did wash out and were whisked away. Naturally it was a topic of conversation. What had they done wrong? Were we next?

The true stress test was supposed to be a camping trip up in the Sierras. This may have been true for the kids straight out of the Bronx who had rarely seen stars much less slept out in the woods but Jo and I considered it a vacation. We had been raised in the foothills of the Sierras and were going home.

The ante was upped when the camp leader arrived the first night.

“Here’s dinner,” he announced casually as he unloaded a crate of live chickens from the back of his pickup. They clucked a greeting.

Fortunately, I had chopped off a few chicken heads in my youth and knew about such things as chicken plucking and gutting. I couldn’t appear too eager in the chopping department, though. Beebo might write something like “displays obvious psychopathic tendencies.”

“Close the door, lock and latch it, here comes Curt with a brand new hatchet!”

My chicken spurted blood from its neck and performed a jerky little death dance, turning the city boys and girls a chalky white. Their appetites made a quick exit in pursuit of their color when I reached inside a still warm Henny Penny to yank out her slippery innards. It seemed that my fellow trainees were lacking in intestinal fortitude. If so, it was fine with me; I got more chicken.

Beebo’s biggest day came when we faced the wilderness obstacle course. Our first challenge was to cross a bouncy rope bridge over a deep gorge. Beebo stood nearby scratching away on his pad. We then rappelled down a cliff… scratch, scratch, scratch. Our every move was to be scrutinized and subjected to psychological analysis. We rebelled.

“Beebo, you’ve been following us around and taking notes for two months. Now it’s your turn. See that cliff. Climb down it.”

“Beebo, you don’t understand,” we were laughing, “you have to take your turn.”

Reluctantly, very reluctantly, Beebo agreed. About half way down he froze and became glued to rock with all of the tenacity of a tick on a hound. We tried to talk him down and we tried to talk him up. We even tried talking him sideways. Nothing worked. Finally we climbed up and hauled him down. Note taking was finished. We wrapped up our wilderness week and our training was complete. Jo Ann and I took the oath and became official Peace Corps Volunteers.

We were allowed one week at home to complete any unfinished business before flying to New York City and reporting to the Pan Am desk at JFK. Since there wasn’t much to do, Jo and I relaxed and recovered from our tumultuous year that had begun ever so long ago with the Free Speech Movement at Berkeley.

We wrapped up our brief visit with a going away party in Jo Ann’s back yard in Auburn. Surrounded by friends and family, we talked into the night. It was one of those perfect summer evenings that California is famous for, complete with a warm breeze tainted with a hint of honeysuckle flowers.