The piranha is indeed a fearsome creature.

Hollywood loves piranhas. They make great movies. Take one cow, throw her in the Amazon, and watch with horror as Bessie is reduced from a surprised moo to a pile of bones in mere minutes by a school of frenzied fish with big teeth. PETA does not approve of this activity.

“Today we are going fishing for piranhas,” the captain of our boat, the M/V Amazon Clipper informed us. “Watch your fingers.”

We dutifully boarded the canoe and were issued hand lines with hooks and a ration of raw chicken. There were no cows or fishing poles. When we arrived at what the guide considered prime piranha water, we baited our hooks and threw them over the edge.

Bam! I got a hit… and a fight. My flesh-eating fish was not happy to have the tables turned. Ever so carefully I pulled him over the side of the boat and was greeted with the snapping jaws of death. My wife Peggy dutifully took a picture and our guide firmly grabbed the piranha and yanked out the hook.

Peggy took a photo of the piranha I caught. I was careful to hold it far away from me.

Fish are slippery characters however and mine slipped out of the guide’s hands, landed on the bottom of the boat, and immediately went looking for someone to eat.  Eight pairs of feet shot up into the air.

Eventually we got things under control and caught several more fish. That night we would feast off piranhas. But first, the itinerary said, we were supposed to go swimming. Why anyone would want to go swimming in piranha-infested water, I didn’t have a clue. The little buggers would be out for revenge.

“They don’t come in here,” the guide assured us when we reached a white, sandy beach. I looked around. It was all part of the same river. There were no signs warning the fish to stay out and there was no fence to keep them out. As far as I could tell the clear water and the white sand would make it easier for the piranhas to find toes.

There is always someone willing to test the waters and jump in feet first, though. Usually it’s Peggy. This time was no exception. I volunteered to take photos. She returned with toes intact.

Peggy went swimming in the Amazon, which was supposedly free of piranhas.

The piranhas were waiting for us at dinner, tastefully cooked. The jaws were on a separate platter, grinning up at us with dentist white teeth. In the age-old question of who eats whom, we had won, at least this time. The fish tasted, uh, fishy with a slight hint of chicken and something else. Was it cow or toe? 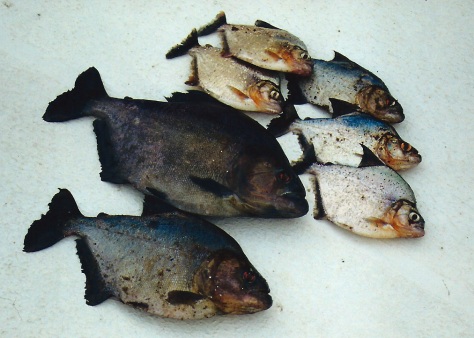 Our catch of piranha, ready to face the cook.