Peggy is perched on the edge of Ubehebe Crater in Death Valley National Park holding on to the sign that warns her not to be there. Fortunately, the sign is several feet away from the big hole. Falling in involves a 600-foot plus tumble. 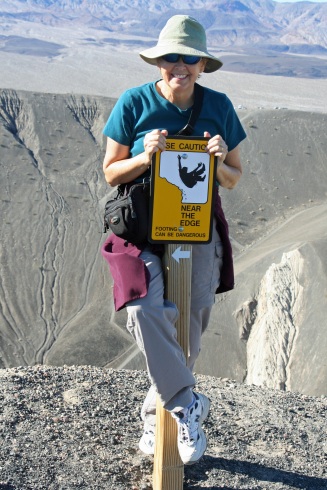 Peggy on the edge of Ubehebe Crater.

There is a safer, but slower way, to get to the bottom. Several trails snake their way down from the crater’s parking lot. If you have ever had the desire to climb into a volcano, Ubehebe makes it easy. Getting out is the challenge.

Geologists used to believe the volcano was 10-12 thousand years old. A recent study by Columbia University suggests it is much younger. The study also warns that the area is still volcanically active. Ubehebe could explode at any time, or not.

The original eruption was violent, a heck of a big bang. Rising magma came in contact with seeping water. They don’t mix well. The result was instant steam. Boom! Scientists call it a hydro-volcanic eruption.

Peggy and I opted to walk around rather than down the crater. There are a dozen or so volcanoes in the area including Little Hebe, which is easy to reach and provides a different perspective. For me, the surreal nature of the eroded landscape more than justified the 1.5-mile hike. Carry water. Oh yeah, Peggy says stay away from the edge.

If you want to visit Ubehebe Crater, and you should, you will need to drive to the north end of the Park. Scotty’s Castle is next door so you can easily include both sites.

Little Hebe Crater is one of a dozen volcanoes found near Ubehebe Crater.

While walking around Ubehebe Crater we came on this strange trail of dirt piles that shot off in one direction from a bush and then switched to head for another bush. I figured it must be a gopher. There is life in Death Valley! I was curious about how it determined where the second bush was.

Erosion of the volcanic soils surrounding Ubehebe Crater create a beautiful but almost surrealistic landscape as shown in this and the following photographs.

What caught my attention about this photo looking south from Ubehebe Crater was the contrast between the green shrubs, eroded landscape and purple mountains.