Sleep over? Each year upwards to 60,000 Elephant Seals visit the Beaches of Piedras Blancas in Central California to mate, shed and have pups. "Are they dead?" I heard a young boy ask his mother. Let's put it this way, when your body is made up of one to five thousand pounds of blubber, you don't move around much.

Pop Quiz: What creature can weigh over two tons, have a two-foot long nose, dive up to 5000 feet, spend eight to ten months of the year on the open sea, migrate upwards to twelve thousand miles, leave a track like a two-ton caterpillar, and mate with dozens of winsome females on or around Valentines Day?

These intriguing animals were all but hunted to extinction for their valuable oil in the late 1800s. Today their numbers are estimated at 170,000.

Close to 10 percent consider the beaches of Piedras Blancas on the central coast of California their home, or rookery if wish to use the technical term. A couple of dozen showed up unexpectedly in 1990. Today their population is pushing 17,000.

Peggy and I stopped by for a visit on our way home from San Diego last week. Seeing the seals in their natural habitat is an incredible experience that we highly recommend. You can learn more about these animals and the best time to visit from Friends of the Elephant Seal at www.elephantseal.org.

Cameras are a must. We took over a hundred photos during our visit. I’ve posted some of the more amusing below. I couldn’t help adding appropriate captions. 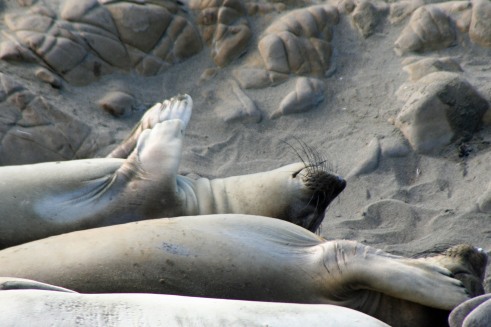 "I don't care how much you pray for a new fur coat for Christmas, I am not listening." The Elephant Seals don't mean to entertain us but watching their antics is sure to bring a smile.

There is always pleasure in scratching a really bad itch. Check out the two Elephant Seals below. Pure ecstasy. 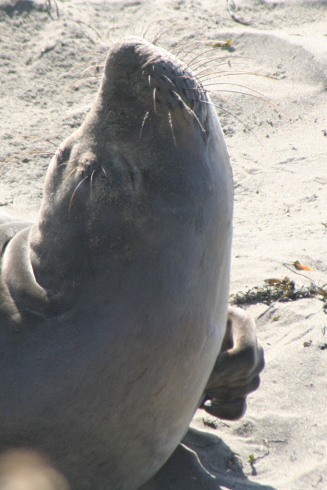 "And this feels even better!"

"Go that way." Ever suffer from a feeling of rejection? This certainly seems to be the case here. Although Elephant Seals are social animals that crowd together on the beach, they can also be quite territorial, especially during mating season.

"Mother always said to use sunblock." Using their flippers, Elephant Seals are often seen flipping sand up over their body. Peggy took this rather artistic photo. Note the seal outlined in the back. The purpose for the dirt bath is indeed to provide protection from the sun. Elephant Seals spend 8-10 months a year migrating in the cold waters of the North Pacific traveling as far north as the Aleutian Islands of Alaska. Most of their time is spent under water diving from 20 minutes to an hour and surfacing for only three minutes. No wonder the sun feels hot!

I caught the flipper action in this photo. 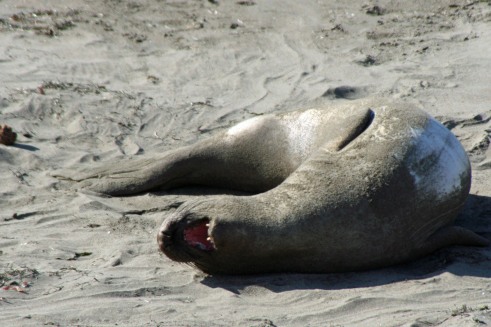 "My Chiropractor suggested this new back stretching exercise." 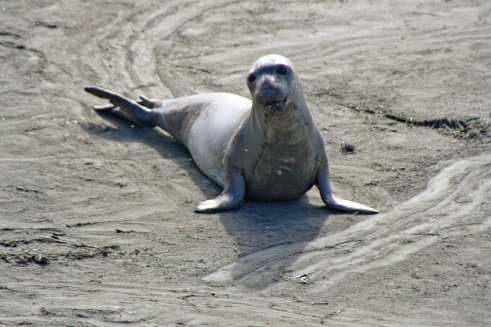 How could anyone resist this toothy grin? 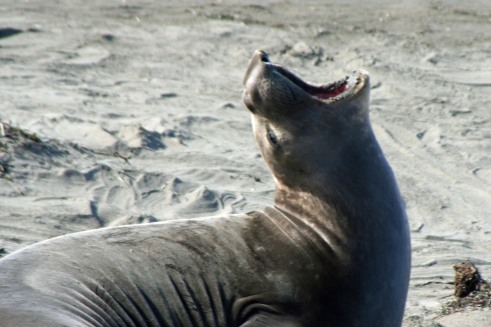 "I am the king!" The size of your nose and the loudness of your roar matters in the Elephant Seal world. Big males become quite feisty during mating season as they gather harems of up to 50 females. As one might imagine, battles between two ton creatures can turn rather nasty. If your nose is big enough, up to two feet long, and your roar loud enough, other males may choose to let you have your way with out a battle, however.

Sleeping cheek to cheek. If that isn't a look of contentment, I've never seen one.

"After a hard day of sleeping, I like to lay back and put my feet up in the air."

If you came across these tracks without knowing who made them, you would probably vacate the premises.

"Did you hear the story about the Rabbi, the Priest and the Baptist Minister?"

"I just love the smell of fish breath." Actually, these guys fast for weeks on end while on shore. There may not be much fish breath left by the time they are ready to return to the ocean.

9 thoughts on “The Marvelous Creatures of Piedras Blancas”