Stephanie Vickers does her laundry during in-country training in her first month as a Peace Corps Volunteer in Zorgowee, Liberia during 1971.

I asked Stephanie Vickers, the president of Friends of Liberia (FOL), to do a guest blog today outlining the work that the organization does in Liberia and her connection to that work. If you are a regular follower of my blog and/or have read my book, “The Bush Devil Ate Sam,” you are aware that I once served as a Peace Corps Volunteer in Liberia and have maintained an active interest in the country since. You can obtain a copy of the book on Amazon. Half of the profits from the sale of the book go toward supporting FOL projects in Liberia.

Education is a key ingredient to improving life in Liberia, as it is in all third world nations. During the civil war that raged in the country for over a decade from 1990 to 2000, education efforts ceased to exist. They suffered a similar fate this past year during the Ebola crisis. A 2012 study revealed that there were 571,555 school-aged children out of school and over 400,000 at the risk of dropping out. According to UNESCO in 2014 (before the Ebola crisis), only 26.7% of school-aged children were attending school.

Friends of Liberia, Peace Corps and other non-government organizations are working in partnership with the Liberia government to once more make education a national priority. I was particularly excited to learn about FOL’s Family Literacy Project, a new program that is designed “for situations where parents with low literacy levels want to become involved in their children’s education.” It is literally a case of helping parents to help their children at a point in their lives when such help is critical to their future educational success.

Stephanie brings a high level of expertise to this effort and over 17 years of experience in working with the people of Liberia (three as a volunteer and fourteen as a member of FOL). Her words:

Friends of Liberia began in 1986 at a National Peace Corps Association conference as an alumni group for Returned Peace Corps Volunteers (RPCVs) from Liberia.

At the outbreak of the civil war in 1990, the organization changed its mission to advocating for Liberian peace, which it did so aggressively. It also turned to actively helping organizations addressing problems in Liberia. By necessity, FOL evolved over the next decades to be far more inclusive in its membership, welcoming Liberians who live in America and many others who had worked in Liberia. Today, it is open to anyone who cares about Liberia and her people. To read more about the early days of the organization, go to http://fol.org/history/.

My connection with Liberia started with the Peace Corps. I grew up in the Bay Area and graduated from UC Berkeley in 1967, and grad school in 1968. I was hired to teach in the Berkeley Public Schools until I joined the Peace Corps in 1971.

I was originally recruited to work as a teacher trainer in Sanniquellie, Liberia with counterparts that traveled to schools to train and support teachers. Unfortunately, the program was loosely organized and I wanted to work more, so I requested a transfer to St Mary’s School (7-12 grades) where I taught Reading/English, Liberian and World History and Economics.

At the end of my two-year assignment, I spent a third year in Liberia helping train new Peace Corps Volunteers. I was responsible for arranging cultural activities to introduce new trainees to the Liberian culture. I also served as an education trainer for new groups of teacher volunteers. My responsibilities allowed me to travel extensively throughout the country. 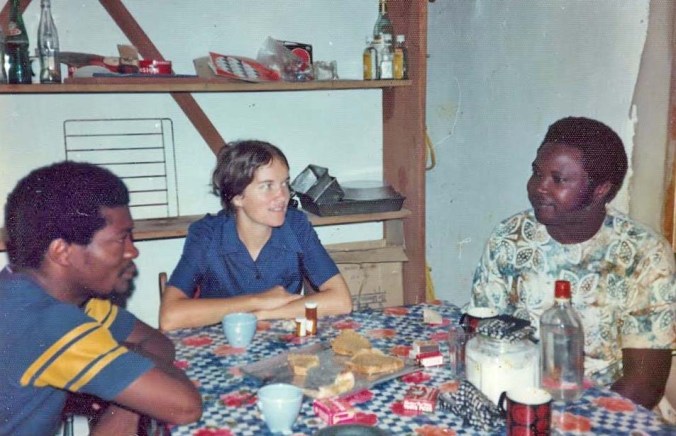 Stephanie in her role as Peace Corps Trainer working with Roosevelt Harris and Dan Goe in Tapita, Liberia, 1973.

After 30 years spent teaching and administering education programs in the U.S, I was drawn back to Liberia in 2001 as a volunteer in FOL’s early childhood education teacher-training project, called the Liberian Education Assistance Project (LEAP). Ironically, I actually got to do teacher training, the original assignment I had as a Peace Corps Volunteer in 1971. Professionally, it was very exciting. I went on to serve as the Administrator and Language Arts instructor of LEAP for 14 years.

On an FOL Trip to Liberia in May 2009, Stephanie shared a literacy lesson with first graders at the Ganta Mission School.

Working directly with Liberian early childhood educators just emerging from the war years, I discovered that many of these teachers and principals had serious gaps in their education and had not had professional development since the 1980s. The small difference I could make as a Language Arts trainer in our methodology sessions was not enough to combat a serious literacy crisis.

Partly due to FOL’s advocacy over all those years, the Ministry of Education has taken up the cause for early childhood education and is addressing it with teacher training and creating model schools. We have yet to determine the full effect of the recent Ebola epidemic that caused schools to close for most of the year on this and other education programs.

I am part of FOL’s “education working group” (EWG), which has decided to take a more holistic approach to improving the literacy rate among adults and children. The FOL Family Literacy Project is in its design stage but aims to be implemented in the next year.

The goal is to improve the academic success of children by improving adult parenting and literacy skills and child literacy skills through a program developed in Israel and widely in use in the U.S and a half-dozen other countries. Home Instruction for Parents and Preschool Youngsters (HIPPY) http://www.hippy-international.org was designed for situations where parents with low literacy levels want to become involved in their children’s education. FOL will partner with organizations in Liberia to implement the project.

I hope Curt’s fascinating stories and my own experience might generate interest in others to get involved in helping Liberia. The Family Literacy Project will need major support to get started and prove itself effective in some of Liberia’s poorest communities. We will continue to keep you updated on www.FOL.org and appreciate your interest.

I would like to close by urging you to follow Stephanie’s link to learn more about FOL and its programs. Please hit the donate button. Reducing illiteracy and empowering people to take charge of their lives is in all of our interests. It’s a small world and getting smaller. –Curt