The sometimes scary El Pulpo Mechanico in black and white.

Peggy and I were out wandering around Black Rock City when we came across the steampunk mutant vehicles that I am going to feature today: El Pulpo Mechanico and the Beamer Steamer. A flaming duck was also present. The folks that created these vehicles came from Northern California and Southern Oregon— our territory, and at least two of the vehicles had connections with the human-powered Kinetic Sculpture Race that runs between Ferndale, Eureka and Arcata over the Memorial Day Weekend.

El Pulpo Mechanico sprang from the creative mind of Duane Flatmo. His parts were scrounged from the Arcata Scrap and Salvage Yard in Northern California. Jerry Kunkel designed his electronic and flame system. His crawdad attachment was once part of one of the Kinetic Sculpture race vehicles.

El Pulpo always draws a crowd at Burning Man, especially when he is flaming. He can go through 200 gallons of propane in one night. 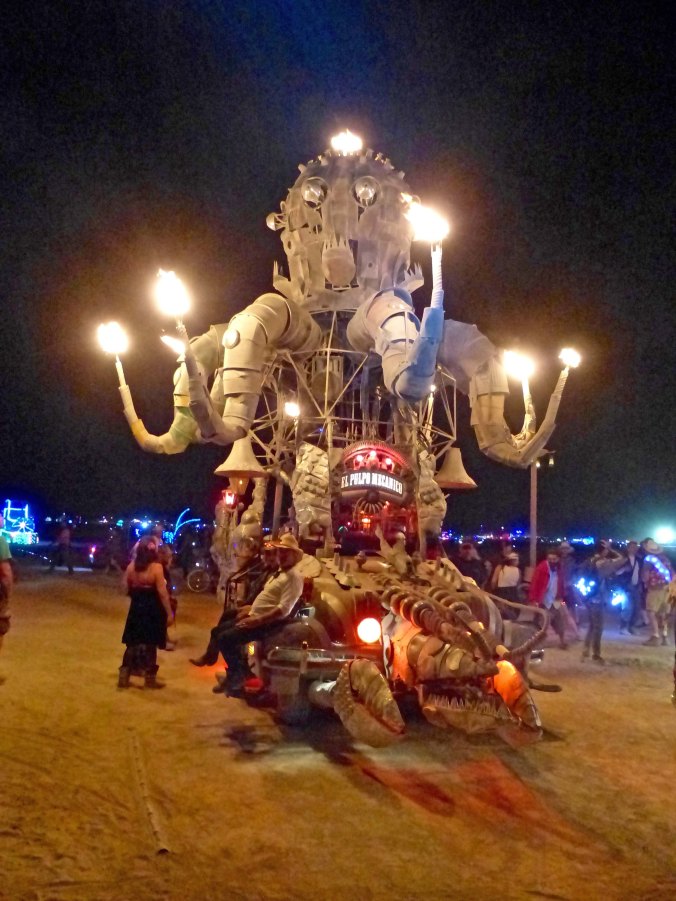 This shot of El Pulpo by our friend Don Green also shows his crawdad front.

Here’s a shot of his crawdad front during the day. This creature was once part of a kinetic sculpture that participated in the Kinetic Sculpture Race in Eureka. (Photo by Peggy Mekemson.)

Looking up at El Pulpo provides a view of his barrel tentacles.

This primitive fish is also a part of El Pulpo’s decorations.

As is this sea-horse! (Photo by Peggy Mekemson.) 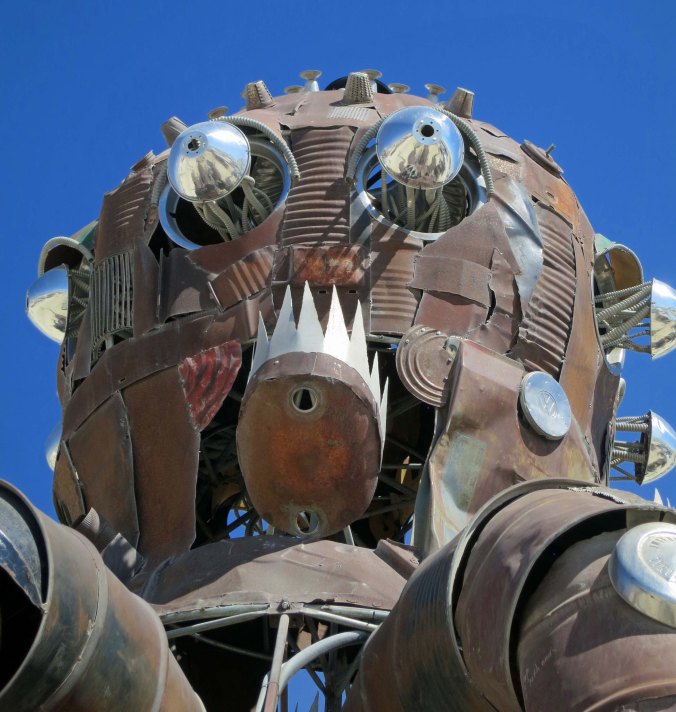 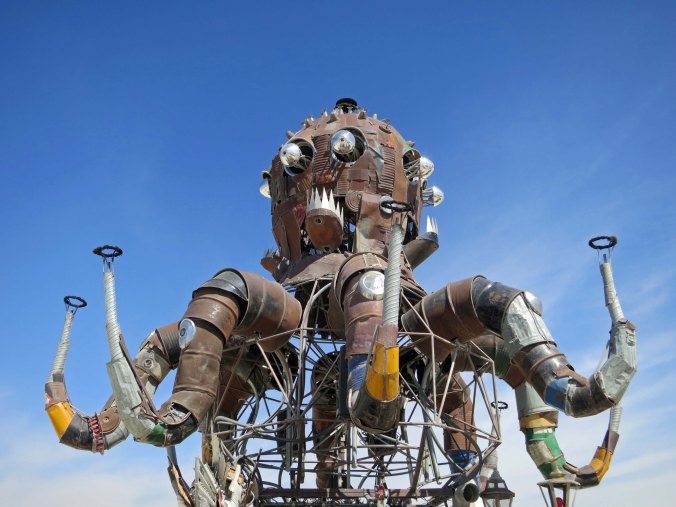 Bob and Karen Thomson of Southern Oregon had been participating in the Kinetic Sculpture Race for several years when they decided they wanted a vehicle that they didn’t have to power with their own effort and sweat. They created the Beamer Steamer to go to Burning Man. 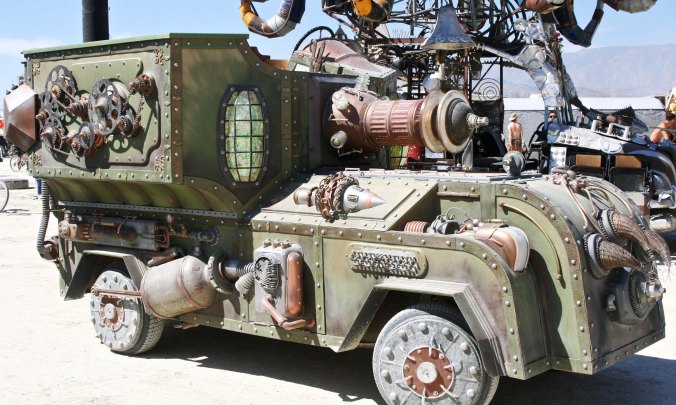 The Beamer Steamer mutant vehicle by Bob and Karen Thomson.

I am not sure of the history of the flaming duck but it can light up the sky at night.

The flaming duck during the day at Burning Man. Check out its head.

The flaming duck out on the playa at night waiting for the man to burn.

You have to travel south on Highway 101 from Eureka to come to the home of my fourth mutant vehicle today. The Rhino Redemption was created by Kevin Clark and the artistic group that works out of the Reared in Steel building in Petaluma. Kevin was also responsible for the creation of the Medusa Sculpture at Burning Man that I have featured in the past. 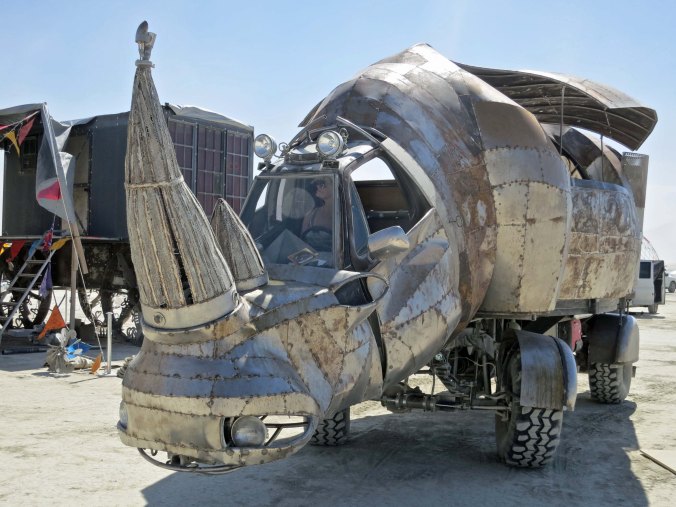 This wonderful rhino mutant vehicle has become one of my favorites at Burning Man. I was once charged by one of his counterparts in East Africa and have had a special appreciation for rhinos ever since. 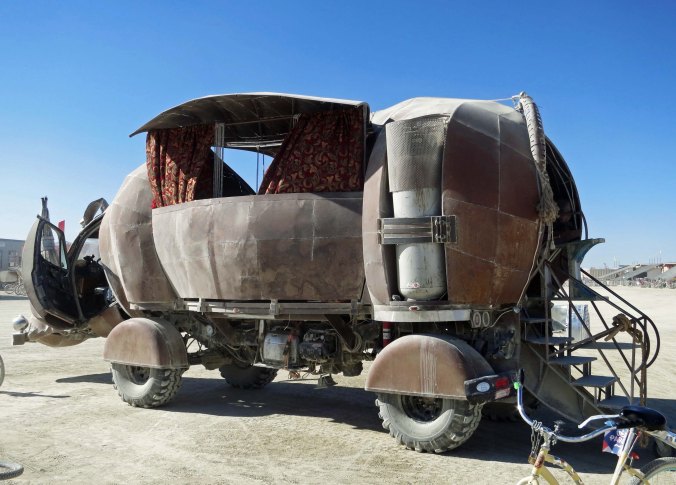 A side view of Rhino Redemption. He can accommodate up to 20 people. 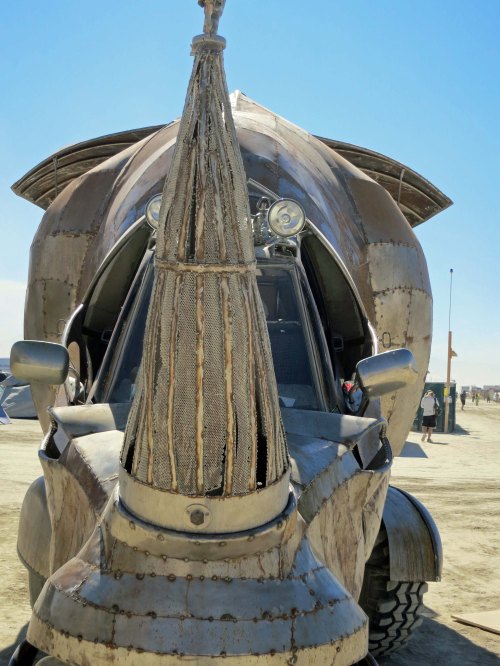 Rhino charging? It’s kind of how I remember it. (grin)

I’ve decided to take a semi-break for my birthday next week when I will be in Las Vegas. I’ll see you back here on March 6. Well, I may put up a blog or two if things are slow, but I wouldn’t bet on it. (grin)

29 thoughts on “Steampunk, a Towering Octopus, and a Giant Rhino… The Mutant Vehicles of Burning Man”