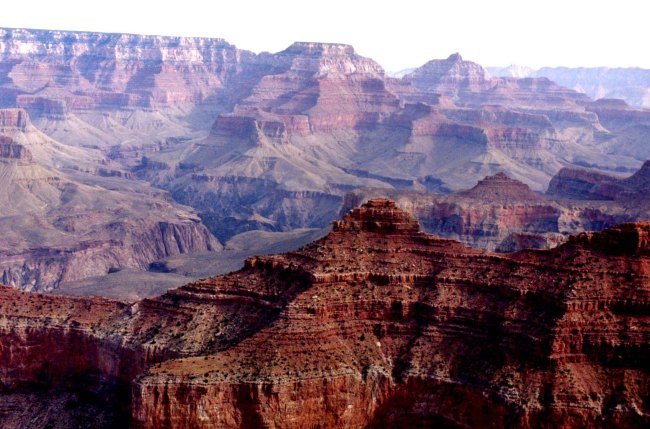 The Grand Canyon is filled with spectacular rock walls that constantly take your breath away. But do they harbor hostile spirits?

It’s time for another blog on my backpacking adventures. This one concludes my Grand Canyon series. In my last tales about the Grand Canyon I journeyed several thousand feet into the Canyon and then several thousand feet out with a 60-pound pack on my back. I confessed to having doubts about the journey along the way. My trips in and out of the Canyon weren’t over yet, however…

A friend was to join me on my next trip into the Canyon but wouldn’t be flying in for several days. (This was in my pre-Peggy days.) I took advantage of the time to explore the volcanic mountains that loom over Flagstaff. Seventeenth Century Franciscan missionaries had named the San Francisco Peaks in honor of the Order’s founder. I put my Ford Ranger in four-wheel drive and followed a winding dirt road up the tallest one, Humphreys Peak, until I found a suitable place to pull off and set up camp.

White fir provided shade and shelter while a small creek gurgling down the mountain provided water. Humphrey’s Peak tops out at over 12,633 feet and can be seen from much of Northern Arizona. Native Americans from the surrounding areas consider it sacred. I spent a week wandering around exploring on foot.

I kept an eye out for bad weather, though. Occasional spring snowstorms in the area have been known to catch and kill unwary hikers and campers. The Hopi have another explanation for these unfortunate incidents. Kachina spirits, Hopi Gods, are said to appear during such storms. Apparently, their intentions aren’t friendly.

Fortunately I saw neither snow nor malicious Kachinas during my brief stay and dutifully appeared at the Flagstaff airport on time to pick up my friend M. She was all smiles and stylishly dressed like an LL Beam model. I could see she was a little nervous. Backpacking isn’t exactly her thing and packing into the Canyon can be rather daunting, even for veterans— as I have noted. M is always game for a new experience though, so she threw her shiny new equipment into the back of my pickup and off we went.

We drove out to the trailhead at Hermit’s Rest and prepared for our descent. A large sign warned that thieves had been breaking into cars. We were supposed to take our valuables with us and lock up our vehicle. It was not the type of sign that encourages confidence. I locked the doors and camper shell, checked twice, and wished my truck well.

This wasn’t the first time outlaws had worked the area. Hermit Trail in its earlier guise had been known as Horse Thief Trail. Apparently for good reason. Stolen horses would disappear down the trail never to be seen again. The Santa Fe Railroad improved on the path in the early 1900s and turned it into a tourist route. Fleecing local ranchers turned to fleecing out-of-state tourists. But those days are history. Bright Angel is today’s trail of choice into the Canyon and the horse thieves have long since ridden off into the sunset. The Hermit Trail is now simply one more minimally maintained route.

While it doesn’t match the Tanner Trail in terms of difficulty, it was still a challenging descent. I must say that M managed her first day much better than I had. At the end of the day we discovered one of the Park Services solar and wind outhouses that guaranteed to fossilize your leavings. We camped up wind and out of sight.

I was eager to share the beauty and isolation of some of the side canyons the next morning. We took a short hike and soon found ourselves in the midst of towering, awe-inspiring cliffs. M’s reaction was much different from what I expected. Dangerous spirits inhabited the area and we were disturbing them. We needed to leave quickly.

On one level, I could understand her unease. In our twenties, we had both been significantly influenced by Carlos Castaneda’s journeys through the Sonoran Desert. Don Juan had taught his young apprentice that mysterious and powerful beings from different realms inhabit remote regions. Some of these beings were really bad dudes, prepared to pounce on the unwary. Given my own pantheistic views, it wasn’t hard to populate the Canyon with spirits. But I had spent years wandering in isolated wilderness areas and had yet to meet a spirit that had caused me any damage, or for that matter, even stopped to chat.

I shared my perspective and was met with a rather cool response. Apparently I lacked the necessary perception to understand the danger. I had the irreverent thought of ‘out of sight, out of mind’ but kept it to myself. M was serious. After her bout with Castaneda, she had moved from Iowa to Texas where she was introduced to the work of George Gurdjieff and his pupil, Peter Ouspensky. Gurdjieff was an early 20th Century mystic who taught that the vast majority of humanity is asleep, little more than robots. Given proper training, however, individuals can awaken and reach higher levels of consciousness. I assumed that it was at these higher levels that one became aware of the evil spirits. Gurdjieff called his training the Fourth Way in honor of Buddhism. He, Ouspensky, and other followers set up esoteric schools to teach people the path to awakening.

One such follower was Robert Burton. Burton was working as an elementary school teacher in the San Francisco Bay Area during the 60s when Gurdjieff and Ouspensky caught his attention. In 1970 he persuaded a number of his acquaintances that he was a person of higher conscious, the stuff that gurus are made of. By 1973 he and his group had purchased property near the small town of Oregon House in the Sierra Nevada Foothills and were clearing land to establish a Fellowship to propagate Gurdjieff’s teaching and grow wine grapes. M and her husband moved from Texas to California to join Burton in his efforts.

By the time I met M in the late 70s she had left her husband and Oregon House, but was still an avid follower of Gurdjieff and Ouspensky. I suspect she was continuing to financially support and participate in the Fellowship. When she learned of my interest in Castaneda, she gave me a couple of books on the Fourth Way and suggested that there was a local discussion group I might enjoy joining.

In some ways, I was a good candidate for what Burton was offering. Eastern traditions, especially Zen Buddhism, had a strong appeal. Meditation gave me the same sense of wholeness and connection that wandering in the woods did. I wanted to believe that humans were capable of reaching higher levels of consciousness, of becoming more civilized in the broadest sense of the word. Self-actualization, to utilize Maslow’s term, seemed like a highly desirable goal and I always had myself on some self-improvement plan or the other. I need lots.

Burton had drawn a number of bright, well-educated, and accomplished individuals around him. In ways, his success at recruiting followers was quite similar to that of Bhagwan Shree Rajneesh who had set up shop in Oregon. Both had strong appeal to people who were seeking meaning in life that they weren’t finding in post Vietnam, post Watergate, super-materialistic America. While M had been finding answers with Burton, another friend of mine had placed herself at the feet of the Bhagwan.

The acceptance of a teacher or guide is a legitimate and time-honored tradition in many Eastern oriented practices. Ultimately, however, I lack the capacity of becoming a true believer. Regardless of the appeal, I am not willing to commit the trust required to place myself in another person’s hands. This means I can never quite understand the value that people derive from joining someone like Burton or the Bhagwan. You have to go there to get it and I won’t make the trip.

Anyone interested in gaining significant control over my mind frightens me, regardless of his or her motivation or whatever benefits will supposedly accrue. The best of folks, from my personal experience and historical reading, have flaws. Assigning someone god-like status hides these flaws. Rational, humanistic justification of action is not required. God or Whatever wills it. A multitude of bad things can hide out under this umbrella. Every day brings new examples.

So I had passed on M’s original suggestion to join a discussion group on Gurdjieff and Ouspensky and now found myself unable to recognize dangerous spirits from another realm. I honored M’s concerns, though, and we returned to camp. Our afternoon was spent capturing the beauty of the Canyon with watercolors.

As we hiked out the next day I found myself fretting over another type of bad spirit, the very corporeal local type that breaks into unattended vehicles. Cresting the Rim, I expected to see window glass strewn all over the ground next to my pickup. There was none. It turns out in my paranoia about locking the truck, I had forgotten to roll up my windows. Fortunately, nothing was missing and nothing had been disturbed. I returned M to the Flagstaff Airport and drove southeast. It was time for another adventure— encountering elk and the spirit of Geronimo while backpacking through the Gila Wilderness of southern New Mexico.

NEXT BLOG: I’ll get to the Gila Wilderness eventually, but next up, I am returning to my recent trip up the Northern California Coast. And I answer a serious question… What do you do when someone points a Nike missile at you?