I wasn’t exactly sure what I was looking at, but I liked it. And I had the feeling it was looking back. To me it represented the artistic creativity that flourishes in the huge warehouse in Sparks/Reno, Nevada known as the Generator.

The Burning Man series I just completed focused on creativity. For one week in late August/early September, tens of thousands of people gather in a remote area of the northern Nevada desert to celebrate art in its numerous forms including sculpture, architecture, photography, mutant vehicles, painting, costumes and performance art.

While Burning Man’s vibrant creativity is what brings me back to Black Rock City year after year, the event is about more than art. A huge party, alternative life-styles, desert survival, focus on participation, community building, social responsibility, environmental awareness, personal growth, and a very long list of etceteras are all part of the equation that makes the event succeed.

Over the past two years, I have found my interest growing in what goes on before and after Burning Man— both in terms of preparation for the event and, more interestingly, the back story on the people and groups who participate. What brings them to Burning Man, how do they influence the event, what do they bring home, and how, in turn, does this impact their lives and the communities where they live?

Today, I am going to feature a 34,000 sq. ft. warehouse in Reno/Sparks, Nevada that is known as the Generator and has been responsible for some of the most striking monumental art to grace Black Rock City in the last few years including Pier 2 (a large pirate ship sunk partially in the desert), and Embrace. A few weeks ago I dropped by unannounced at the Generator and asked permission to wander around and take photos. “Sure,” one of the artists who was working on a project, told me. It wasn’t quite official, but it was enough. Off I went. I am going to share what I found.

Even from a distance, the size of this 72 foot sculpture built by the Pier Group at the Generator is obvious.

This pirate ship partially sunk in the sand was another major project the Pier Group took on.

First, however, I want to mention an event that took place in Londonderry, Northern Ireland in March. I’ve blogged several times about Burning Man’s Temples. Several of these were designed and built by David Best with a large crew of dedicated volunteers. This spring, David was invited to build a similar structure in Londonderry that would be burned, as each Burning Man Temple is. Not everyone in Londonderry thought it was a good idea. The Northern Ireland feud between the Protestants and Catholics has been tearing the city apart for what seems like forever, or at least since 1688 and things that burned were often related to fire bombs. As was noted in a New York Times article, “Burning a 75-foot-tall pagan temple in a Republican Catholic enclave on the loyalist Protestant side of town to ‘bring people together’ seemed, well, mad.” This could have proven to be, well, a gigantic understatement. But it wasn’t.

What happened was that the event turned out to be a powerful force of reconciliation, including bringing people together who had been dedicated enemies all of their lives. 60,000 people (half of the city’s population) came to the temple and left messages for loved ones who had passed on and 15,000 Protestants and Catholics joined in watching the Temple burn. The event is a powerful example of what I am talking about in terms of Burning Man’s impact outside of its home in the Black Rock Desert. I highly recommend reading the NY Times article.

A Burning Man Temple built by David Best and volunteers.

I view the Generator as another example. Matt Schultz and his band of merry followers, the Pier Group, are the visionary force behind the Generator. “We’re an inclusive art space for anyone who wants to make art and be part of a creative community,” the Generator’s Internet site declares. While numerous Burning Man Projects are conceived and built at the Generator, the facility has no direct affiliation with the event, and many non-Burning Man art projects are also produced at the warehouse. Non-Burners as well as Burners are invited to become members. The process is incredibly easy. Just show up with a specific art project or dream of an art project. Discuss it with Matt or one of his cohorts, obtain approval, and sign a waiver. Welcome aboard. 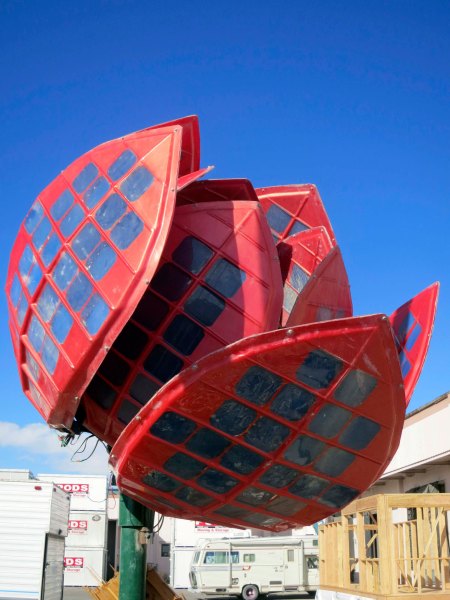 We drove around Sparks looking for the Generator. When we found this flower sculpture, we knew we had arrived. It is very Burning Man like. The small structure on the right is a tiny house that Matt is building for himself but hopes will become a model for other small houses in Reno.

There are no membership fees and no charges for using the facility. Members have access to an incredible array of tools ranging from large industrial tools to smaller hand tools. There is even a laser printer. The Generator houses a wood shop, a metal shop and a tech shop. There is also a sewing room, a stage, a lounge, a library filled with how-to books— and a small green house! More importantly, there is a warehouse full of creative types who inspire creativity and are more than willing to offer a helping hand when asked.

As you might imagine, even the library of how-to books takes on a different look at the Generator. 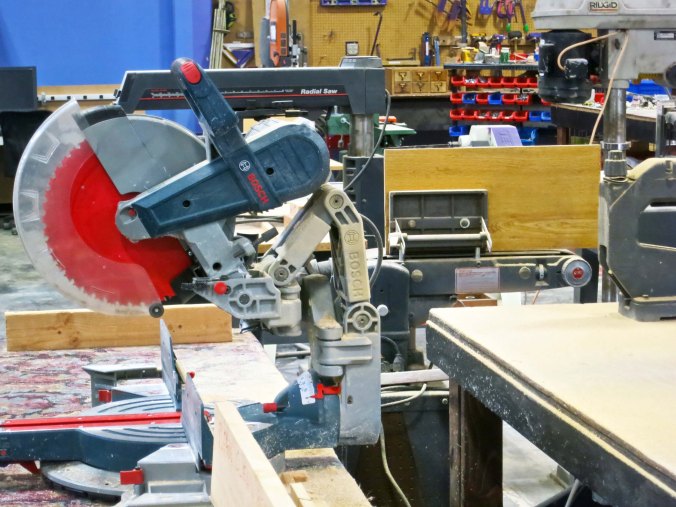 A variety of tools are available for use at the Generator. Anyone who wants to use industrial sized tools like this one are checked out first to make sure they know how to use them. Safety is heavily emphasized.

A selection of the hand tools that are available. 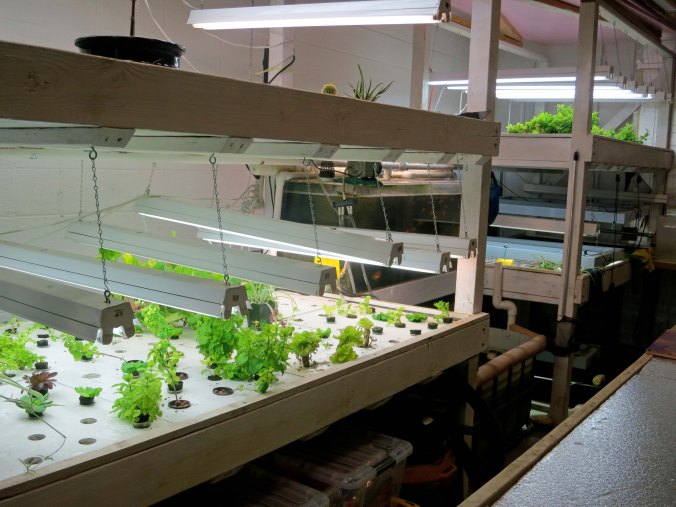 I confess I was surprised to find a mini-garden growing.

The readiness to contribute is an underlying principle of the Generator. “We are looking for people willing to share their time, skills and resources to help build a greater community together.” Such sharing might come in terms of offering a workshop in an area of expertise, loaning out a tool, or even doing heavy lifting when heavy lifting is called for. There are also more nitty-gritty expectations such as keeping personal workspaces clean and helping to maintain common areas such as the bathroom and kitchen. I was somewhat amused to find that the Generator has an official “No Asshole Policy.” Members are expected “to be kind, honest and direct with each other.” “Hey birdbrain, why don’t you clean up your pigsty,” might meet the directness criteria but it fails on kindness.

There was nothing subtle about the sign on the refrigerator.

While perusing the Generator’s website, I came across one of my favorite all-time quotes:

“Never doubt that a small group of thoughtful, committed citizens can change the world; indeed, it’s the only thing that ever has.” Margaret Mead

The website proclaims: “Our goal is to foster a community that spends more time pursuing creative endeavors of the mind and heart, inventing and building, and spending a bit more time enjoying the beautiful world we live in. By encouraging more thoughtful, creative interactions we believe everyone has the power to change the world! We are here to share knowledge, build our greatest dreams and laugh the entire time.”

I am a big fan of laughing.

Matt’s vision encompasses the surrounding community as well as the Generator. He is presently working with Reno’s City Council on finding a larger site nearer the center of town. His plans include building a community garden, creating small residential spaces for up to 25 artists, involving and revitalizing the surrounding community, and moving the Generator (expanding its size to 50,000 square feet). All of this, he states, will be done utilizing the latest in environmentally sound building techniques.

The most ambitious element of the plan is to utilize the pirate ship and Embrace, as the start of what would become a world-class sculpture garden on par with those of London, New York and Paris. All of this might seem a little naïve, perhaps a little pie in the sky… until you think about what Matt and the Pier Group have already accomplished.

As I wandered around in the Generator, I became a believer.

One of the fist things I noticed was this rock ‘path’ working its way along the back wall. 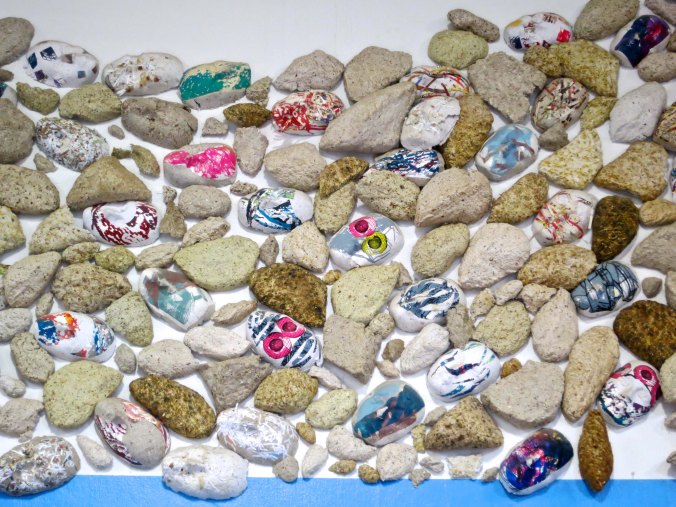 Checking closer, I found numerous little faces staring at me.

The next thing that captured my attention was a work of modern art. Watch out Jackson Pollock.

There was no doubt where the painting was created. Even the floor demanded attention.

I suspect this acrobatic woman spent time in the art studio. In fact, she may have been at least partially responsible for the decorated floor and walls.

Located among the paintings was a poignant reminder.

I was impressed with how the artist, Paula Rie Bonham, rendered the movement of these horses.

Someone was having fun creating this miniature house. It reflected the diversity of the projects being undertaken in the Generator. It also looked like something my wife Peggy would love to tackle. 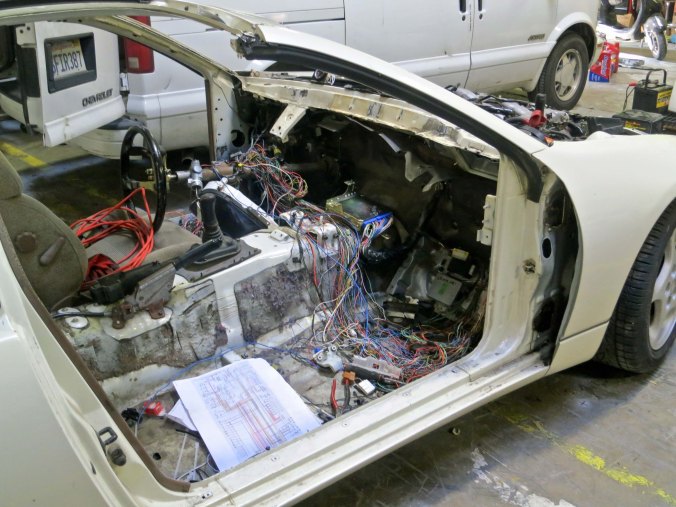 My guess is that this is an art car or mutant vehicle in production that will eventually make its way to Black Rock City. 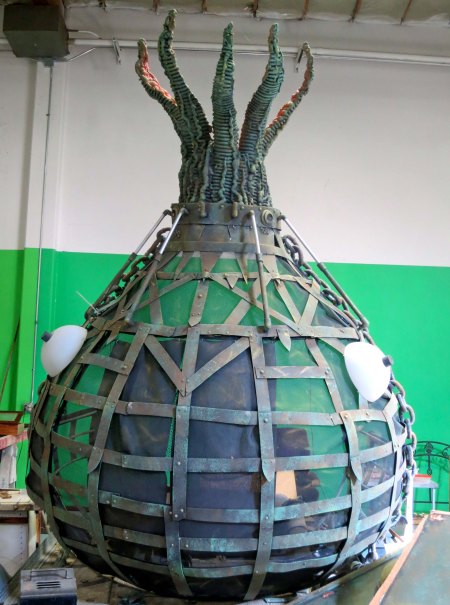 I’ll conclude with this buggy eyed creature. I wondered if it was destined to be attached to the art car. NEXT BLOG: Spring has sprung in southern Oregon. I’ll introduce you to some of the wildlife that considers our five acres home. Love is in the air.

25 thoughts on “Reno’s Generator… What Happens at Burning Man, Doesn’t Necessarily Stay There”