The first blog series I ever wrote was on an 18 day rafting trip down the Colorado River through the Grand Canyon that Peggy and I made, along with Bone… featured above wearing his life vest.

I reached the hundred thousand mark on blog views Saturday. While this hardly reaches the definition of viral, it is a significant milestone for me, and I want to thank each and every one of you who have joined Peggy and me on our journeys. So here you have it:

I first started blogging right after I had attended the San Francisco Writer’s Conference in 2010.

I had learned at the conference that publishers no longer did publicity for your book unless you were a really, really big name… such as J. K. Rowling, or the President, or a mass murderer. It didn’t seem to matter which. In fact the odds of a new writer even picking up an agent or publisher were pretty close to zero unless he or she met the above qualifications.

But, we were told, there was a dim light at the end of a very long tunnel. The Internet was changing how the book industry functioned, just like it had changed how the music industry functioned, and every other business it touched. Think about travel agents. When was the last time you used one?

We now had the power to market our own books. We also had another way of capturing the interest of an agent or a publisher. It all revolved around building a following on the Internet, or a platform as the book people called it.

It wasn’t like blatant advertising; it was more like letting people get to know you while you got to know them. If they liked you and liked how you expressed yourself, maybe they would buy your book. Or, conversely, if agents or publishers saw that you had a large audience of potential readers, they would be more likely to take your book on as a project.

And there was more– as advertisers like to say on late night television– we could use the Internet to self-publish our own books. All of the gatekeepers of the publishing industry: the agents and editors and publishers and bookstores, could be circumvented.  Self-publishing was becoming respectable; it was no longer the dirty word of the vanity press days. And there was scrumptious ice cream on top of the apple pie; we could expect to receive 50-85% of the revenues generated by our book as opposed to the 10-15% traditional publishers returned.

So I went home and started blogging. My first post was titled On Being Squirrelly. It featured the start of an 18-day private trip down the Colorado River through the Grand Canyon that Peggy and I took along with and Bone. His photo kicks off this post. Bone, for the uninitiated, is a horse bone I found while backpacking in the Sierra Nevada Mountains in 1977. Like the infamous Gnome, he has been travelling the world ever since.

What I quickly learned at the beginning of my efforts was that I really enjoyed blogging. It was a way to share Peggy and my adventures plus feature our photographs. It was also a way to make new friends and enjoy the blogs they produced. Blogging became an end in itself. (None of this means I have forgotten my original purpose. Within the next couple of months you should have the opportunity to purchase the book on my African Peace Corps’ adventures. Woo hoo!)

Word Press makes blogging easy, a fact that I truly appreciate. I also enjoy the statistics; besides being fun, they provide me with an overview of how I am doing in the world of blogging. Here are a few highlights in addition to the 100,000 plus hits:

This 1500 year old redwood is located in Redwoods National Park on the northern coast of California.

I found this Santorini church with its white rocks surreal. 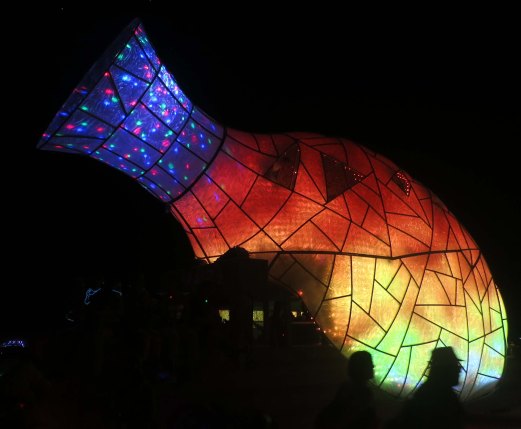 One of my favorite Burning Man mutant vehicles lit up at night.

NEXT BLOG: Peggy and I return to Puerto Vallarta and go on a walk-about. Join us.