I’ve had another thought about the flying saucer the Man was perched on for 2013. Maybe it was a huge clam. BTW, do you see the two small feet extending out from each side. Those were slides you could exit the Man on. I clocked myself at 60 MPH after Tom/Adios Lovering guaranteed it was a gentle ride down. Note to self: Never believe anything Tom tells me. But I knew that.

Having burned the Man in my last blog, it is time to wrap up Burning Man for another year. I decided to do so with photos. Enjoy. 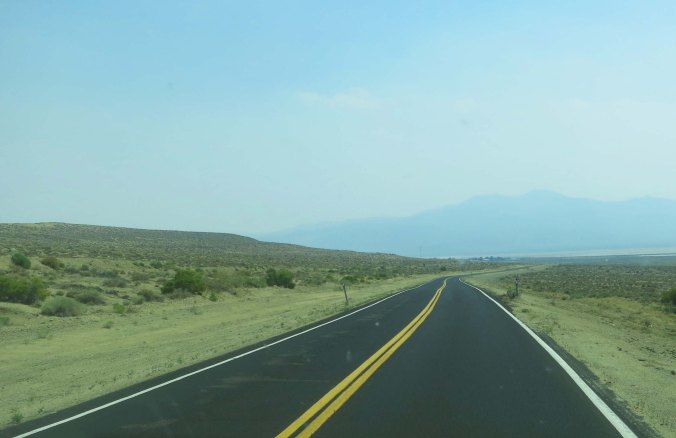 Burning Man is located in the remote Black Rock Desert of Northern Nevada. These roads can be very lonely– except when Burning Man takes place. Local jurisdictions use the Burning Man traffic count to justify their annual highway budgets.

There is nothing lonely about the road when you arrive at the entrance to Burning Man. We lined up with umpteen thousand other people on Monday. The drive from our home in Oregon to Burning Man was eight hours. The last four miles took four hours. Did I mention dust?

A city of 60,000 grows up over night, literally. Black Rock City, for its one week of existence, is the third largest city in Nevada. I suspect the coyotes say, “There goes the neighborhood.” (Photo by Peggy Mekemson.)

People come to Burning Man for numerous reasons, but one of the most important is the art. It can be monumental such as this 60 foot tall woman (Truth Is Beauty) and…

…this seven ton coyote. Someone is standing in his mouth with a flashlight. Maybe it’s a dentist. People crawled all over the coyote until a few too many fell off. Equation: Number of beers = odds of falling.

A tail’s-eye view of Coyote during the day. Need a wire brush? One person rests in Coyote’s belly while another climbs up the sculpture. 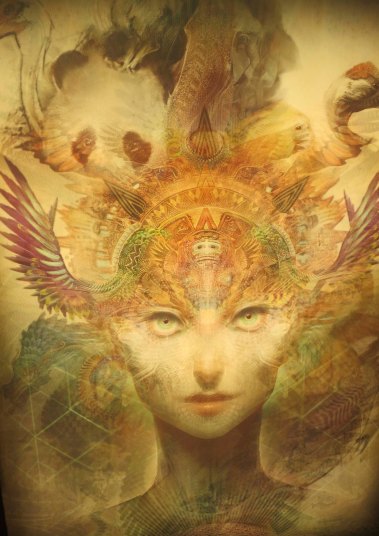 The art of Burning Man is as different as the artists that create it. We discovered a whole tent full of beautifully rendered paintings with mythical/Eastern themes. 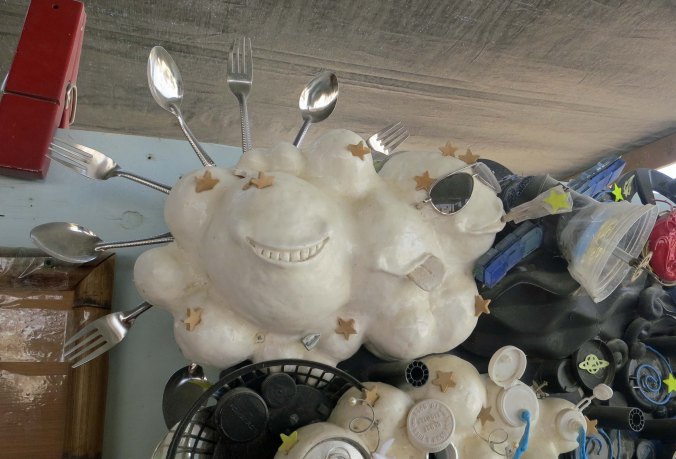 Art is often humorous, such as this collage featuring a puffy cloud with a Cheshire Cat  grin and silverware.

Admittedly, much is strange.

Every blank wall begs for a mural. And usually gets one– or several. 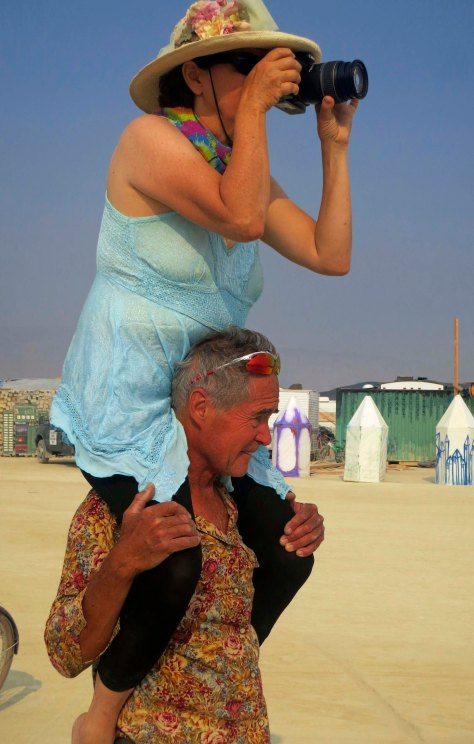 A photo-op of a photo-op. Tom needed a photo and somehow decided that Peggy resting on his shoulders was better than me resting on his shoulders. Anyway, 60,000 people at Burning Man pretty much guarantees 60,000 cameras. Let’s assume that each person takes an average of 50 photos, which is a conservative estimate in today’s world of digital cameras. That means upwards to 3 million photos were taken at Burning Man 2013.

What you see by day…

May appear considerably different at night. Are you ready for Halloween?

Strange creatures wander the Playa at night. In the streets of New York City, or London, or Tokyo… El Pulpo Mechanico would create a panic. Here its, “Oh look, here comes the octopus.” 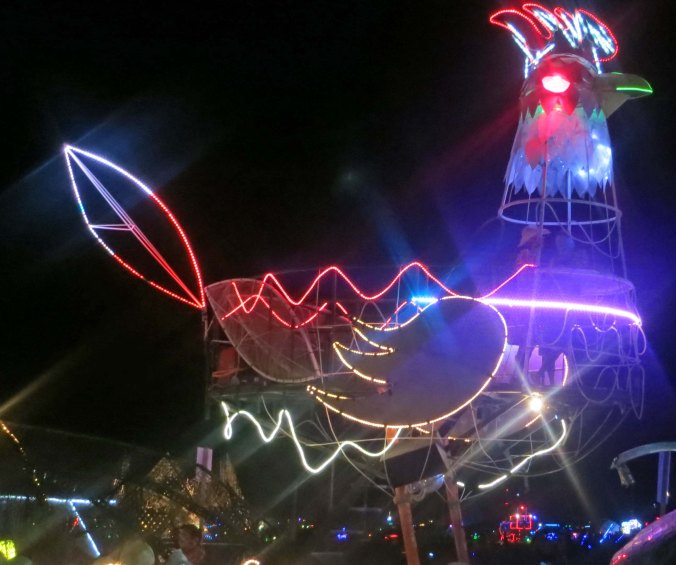 Or maybe a giant rooster will come to visit.

If you need a break, there are always games to play. I knocked down nine of the ten pins at the Toilet Bowl. (Next to the Toilet Bowl was a long string of port-a-potties.)

Some games can be injurious to your health. Here’s a Burning Man style caution sign. 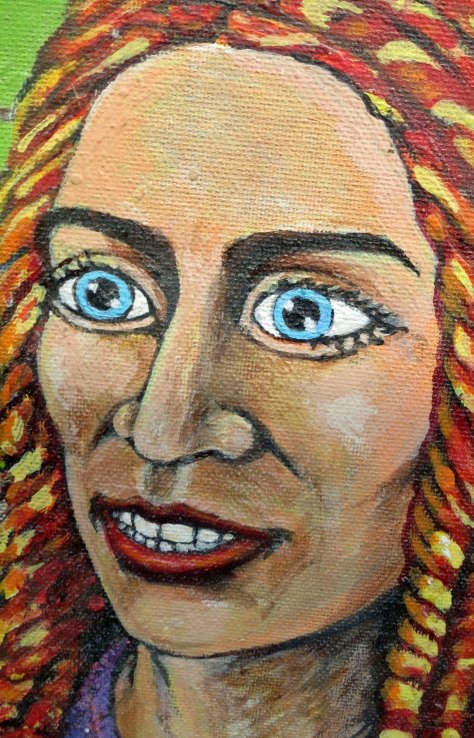 You reach a point at Burning Man when your mind goes on overload, when you believe you have seen it all. 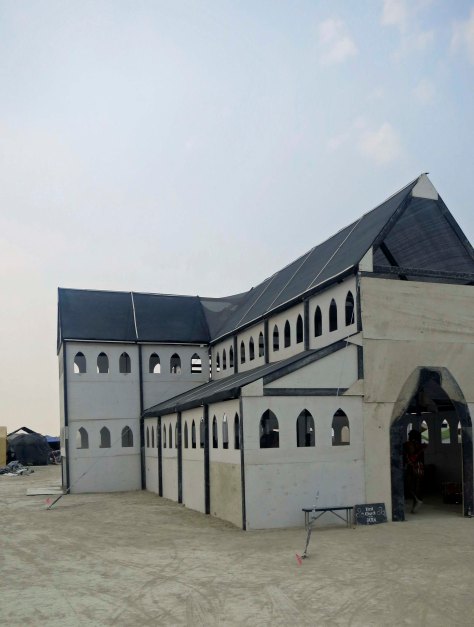 And then something happens to blow your mind. A man and his friends built this church to last for the week so he could get married.

We crashed the wedding. Well, we did ask, sort of.

Vows were determined by spinning the wheel.

Later, we attended the wedding of Bone and Bonetta at the church. Bone has been wandering the world for 45 years. He rescued Bonetta from a Florida swamp four years ago. They finally decided to get married. Bone’s kilt was made by Ann Baughman, an 80 plus year old woman who lives in Kansas. Punkin aka Beth Lovering made Bonetta’s gown. Both are members of the International Society of the Bone.

Ken Axen of New York provides Bone with a pep talk just prior to the wedding.

A final burn. The Cradle of Mir. 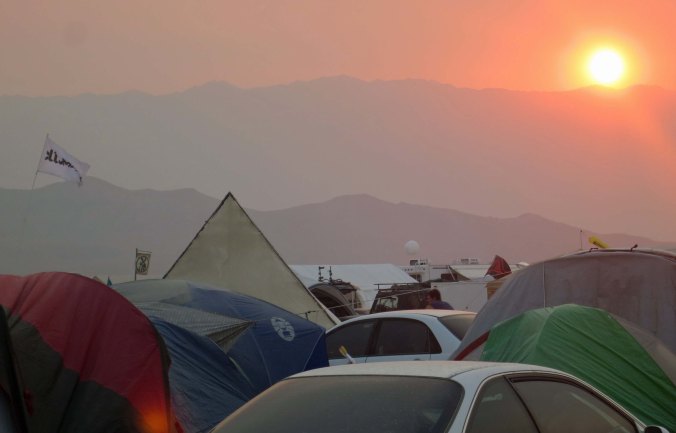 Until next year. I hope you’ve enjoyed this series on Burning Man.

NEXT BLOG: I am close to finishing “The Dead Chicken Dance,” my book on the sometimes scary/sometimes humorous adventures I had as a Peace Corps Volunteer in the jungles of West Africa. I’ve posted several blogs on the experience. My next blog will be the introduction to the book.