At night, Burning Man is a magical place that can pull you out of your everyday world. Here, the Man, about to be burned, stands on top of a flying saucer. Note the monster mutant vehicle on the right and the clothes hanger vehicle on the left.

In the movie, Star Wars, Luke Skywalker begins his heroic journey in Episode IV by travelling to the spaceport of Mos Eisley with Obi-Wan Kenobi, R2D2 and C-3PO. Once there, they meet up with Hans Solo and Chewbacca, the 200-year-old Wookiee.

Mos Eisley is a dangerous place, a frontier town populated with colorful characters and aliens who exist outside the law. It is a world totally different from the one that Luke has known– the perfect place to launch a heroic quest.

George Lucas credited the world-famous mythologist Joseph Campbell, and his book, The Hero with a Thousand Faces, for inspiring his original trilogy. According to Campbell, the standard myth of the heroic quest consists of three phases: a departure from everyday life, an initiation that consists of overcoming a series of challenges, and a return to normal life where lessons learned are shared.

I am a long time fan of Campbell. His admonition to “follow your bliss,” i.e. do what you love, is my motto. I think Joe would have seen Black Rock City and Burning Man as the perfect jump off place for a quest. I suspect he would have immediately begun to mythologize the experience.

Departure involves coming into a town, region, or situation that shakes up your perception of reality and provides you with an option of change, or even transformation. You can have your nails done or go for the complete makeover. Or you can beat a hasty retreat back to your comfort zone. It’s up to you.

The Virgin Burner, i.e. newbie, who comes to Black Rock City, is immediately thrown into a world of heat, and dust, and noise, and music and magic. There are monsters roaming the Playa and naked people wandering through camp. You can find angels, and devils and aliens on almost every block of the 68,000-person city. You can sway all night with thousands of people to the primitive beat of heavy metal in a tribal ritual as old as humankind, or meditate alone in the far reaches of the Playa.

For me, Burning Man starts with the journey there. When Peggy and I hit the vast open stretches of the Northern Nevada desert, we know we have almost arrived. I took this windmill shot on a very lonely route 447 from the small town of Cedarville in California to the small town of Gerlach in Nevada.

Monsters, such as this dragon, roam the playa 24/7 but are particularly impressive when they are lit up at night and are spouting fire.

The newcomer to Burning Man, known as a Virgin Burner,  is greeted by the third largest city in Nevada, a town of 60,000 plus that has grown up overnight. Each street offers multiple opportunities for exploration. (Photo by Peggy Mekemson.)

There are innumerable things to do… many which come as a surprise, such as roller skating. (Photo by Peggy Mekemson)

Feeling a little overwhelmed? You can always call on God. One of the theme camps provides a booth. Much to her surprise, Peggy discovered that God is a woman. Peggy told her she was glad she was at Burning Man. I am not sure what Winnebago had to do with the discussion.

For all of the vaunted crowds, noise and ceaseless activity, large stretches of the Playa are made available to Burners who want a little down time and are willing to bike out to the fence that marks the end of Burning Man territory.

And art is everywhere– art that can inspire by its beauty, challenge by its message, and amuse by its humor. Over three hundred works were scattered through the city this year including a beautiful 42-foot naked woman with her arms outstretched in dance and a seven-ton coyote howling at the moon. 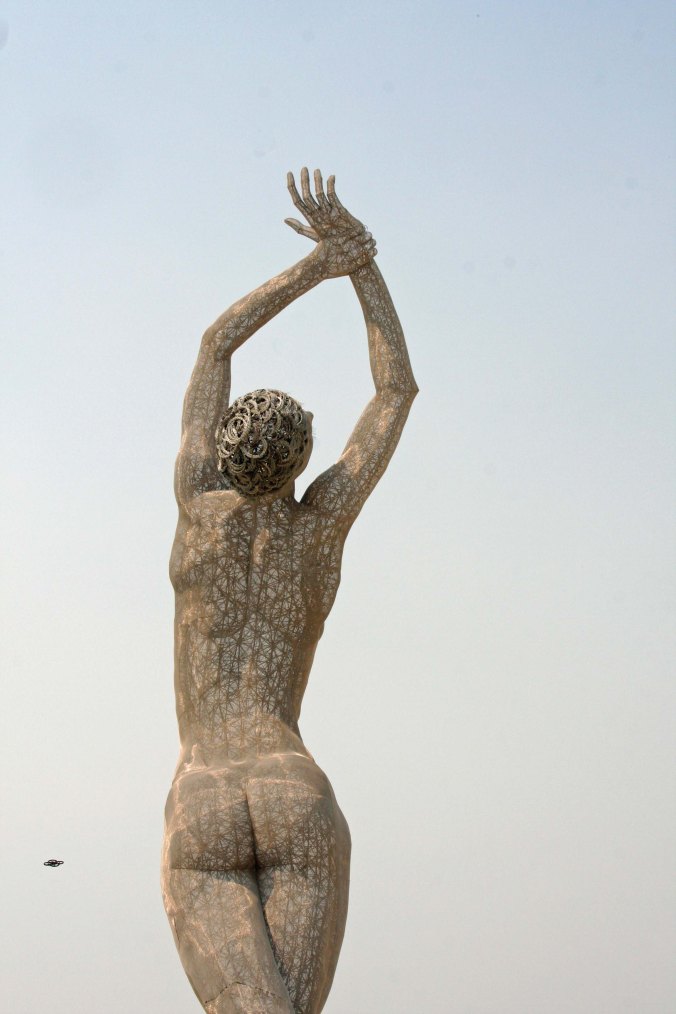 Art has become Burning Man’s major attraction for many people, including me. This woman drew a constant crowd and I will devote a complete blog to her. BTW, is that a flying saucer on the left? (grin) (Photo by Peggy Mekemson.)

This seven ton coyote howling at the sky was also a major attraction at Burning Man 2013. More later…

Performing art is even more prevalent. Fire dancers work their magic with twirling balls of fire and batons. Musicians sing and play drums, guitars, saxophones, sitars, accordions, banjos, harmonicas and almost anything else that makes music. A one-man-band went strolling by our camp with his instruments trailing along behind. We stopped on the Esplanade and listened as a woman with a powerful voice sang Italian opera on top of a mutant vehicle that shot fire into the sky when she hit high notes. 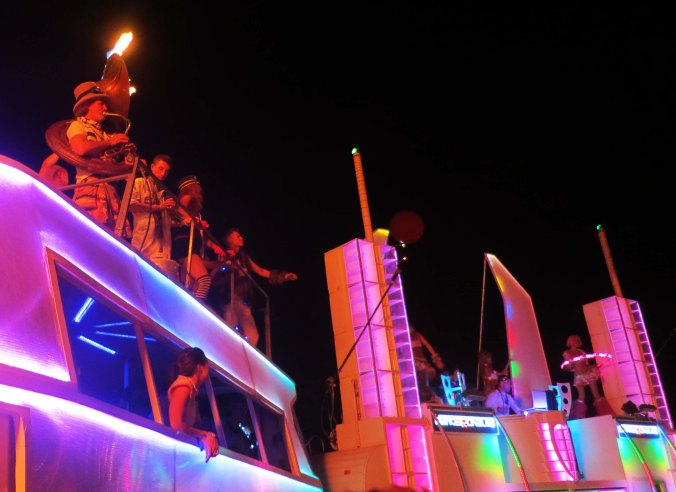 I would be surprised if there is a musical instrument not represented at Burning Man. I’ve even seen harps. Above, on the left, is a flaming tuba. A woman with a lit hula hoop works stage right.

Campbell saw artists as modern myth makers, as the people who capture and translate what is happening in the present time, who “turn the world into an icon so that it’s radiant.” He would have been excited to see the cutting edge art that Burning Man artists produce and enjoyed meeting the artists. I also think he would have understood the burning of art, which speaks to our transitory nature and the Eastern concept of letting go. 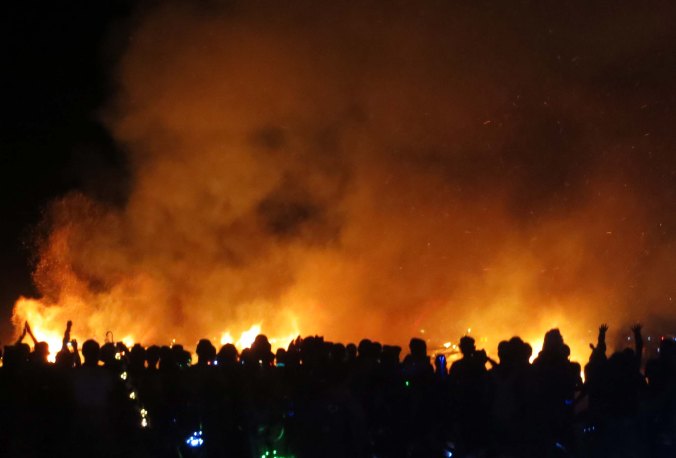 The burning of art, the Man and the Temple guarantee that thousands of Burners will be present on the Playa.

I don’t think Burning Man will transform the world, as it would like to, but it is part of a transformation that is taking place. I do believe it has the power to transform individuals. Many who participate return home changed. For some, it is the “aha!” experience of a lifetime. Joe Campbell would be impressed, or at least amused.

This woman strolled by our camp on stilts and performed a graceful dance with her cape. Performance art is everywhere in Black Rock City.

I conclude this blog with the Man wreathed in fireworks.

Next Blog: The faces of Burning Man 2013