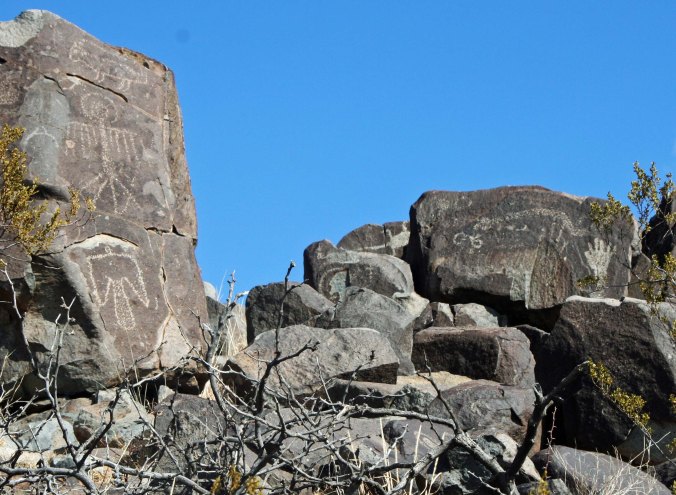 Petroglyphs are often found in the same location. How many can you find in the above photo? My answer is at the bottom of the blog.

When you find one petroglyph, you will almost always find more, frequently on the same rock. There is a general rule of thumb that Peggy and I follow: The more you look, the more you will find. Sometimes the petroglyphs were created at the same time and were tied together. More often, individual glyphs are added over time– in some cases over a period stretching out for a thousand years. Or more. Why waste a good rock?

The search is endlessly fascinating because you never know what’s going to pop up, or where. You may find hastily sketched glyphs for hours and then come on someone’s masterpiece, hidden away in a rock crevice or high up on a cliff.

Today, I am going to finish off my blogs about the Three Rivers Petroglyph site in New Mexico with photos featuring groups of petroglyphs on the same rock or nearby rocks. See how many you can find and let your imagination run wild with what they mean.

There may be even more petroglyphs here than in the first photograph. Check out the rock crevice behind the star. (Can you find the star? grin) I like the trail sneaking off over the rock on the right.

Here’s where interpretation can be fun. From left to right: Is the frog/lizard sticking its tongue out to catch a fly on top of the rock? Then there is the upside down man figure with the feet of a windmill. Next to it is the glow in the dark, Datura yoyo followed by an impressive bear foot, or is it a scared guy with his hair sticking out? And what’s with the turkey foot in the face of the Thunderbird/eagle? Did you catch the bear foot on top of the rock at the right?

Hard to get more jumbled than this. Check out the lizard on the left with the X-ray eyes. Bottom left shows a guy shooting a bow and arrow. I like the Bighorn Sheep climbing the steep mountain.

I’ve included this rock art because of the interesting petroglyph in the middle. Think of it as a weather forecast: It’s partly cloudy with a chance of thunder storms. The cloud with lightning is fairly common. But this one has the sun peeking out behind.

I’ll conclude with what I am calling a starry, starry night with Van Gogh in mind. At first, I thought river, but the more I looked at it, I decided the little specks were stars and the stream was the Milky Way. Maybe, maybe not– but it seems a fitting image to end this series with. Oh yeah, I’m pretty sure the round object is a UFO.

BTW: I found 15 petroglyphs in the first photo.

NEXT BLOG: The journey to Alaska begins. First up I will introduce you to Quivera the Van– our faithful traveling companion. Question: Could you and a companion live in 120 square feet for four years?