A lot of the rock art at the Three Rivers Petroglyph site is simply fun, such as this butterfly.

Is there a whale among the Three River petroglyphs? How about a ship? Or an octopus? The fish isn’t so strange, nor are the buggy bugs. But how did the ocean life end up in the middle of the Chihuahuan Desert? Maybe I am simply suffering from an overactive imagination brought on by staring at thousands of petroglyphs. I can guarantee I haven’t been imbibing in the Datura used by Shaman to create altered states. That stuff is dangerous. (Actually, it can be deadly.) The residents of Jamestown once fed it to British soldiers in 1676 and knocked them out of commission for 11 days. Afterwards, the plant was named Jimson Weed, after Jamestown.

It looks like a whale to me… or at least a whale of a fish.

And what’s with this octopus. Did the Jornada people travel to the ocean?

I guess if you have a whale and an octopus, it is only natural to have a ship with sails. Check out the guy jumping around in the back. 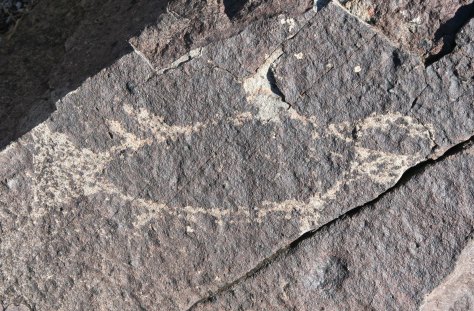 This looks suspiciously like a seal, minus the hind legs.

Okay, I’ll buy a fish petroglyph. Not sure about the circle. Maybe the fish is being served up on a platter.

Datura, a beautiful but dangerous plant. I took this photo on the American River Parkway in Sacramento.

What you might run into after consuming a few too many Datura seeds.

Or possibly you might meet a pair of arrows with attitude.

NEXT BLOG: Snakes, lizards and a few more bugs.