Kathi Saage and I rub the nose of Il Porcellino in hopes of returning to Florence.

So, here’s a serious question: With all of the beautiful art in Florence, why in the world would I kick off my Florence series with a pig?

I’ll be brief. I was told if I rubbed the nose of the pig, or the snout of the boar if you prefer, I would come back to Florence.  Considering I had six hours to explore everything Florence had to offer, I looked on my nose polishing effort as a guarantee of a return trip. 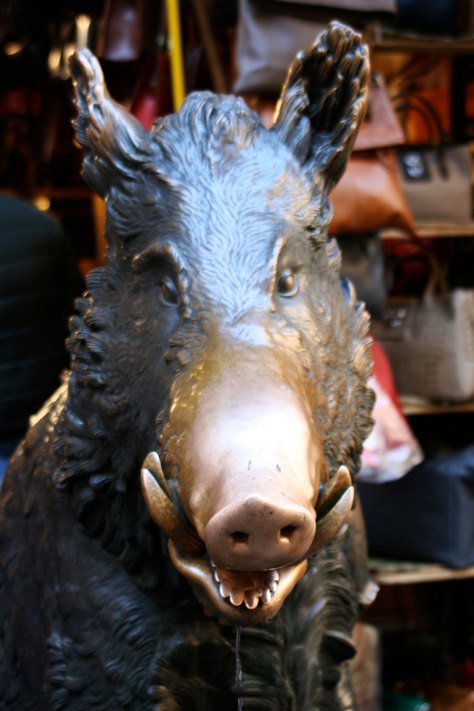 Il Porcellino, or Little Pig, as he is known, was sculpted way back in 1612 and was based on an original marble pig of Greek origin dating back to who knows when. The present pig is a copy of the copy. You can tell by his shiny nose that lots of people share my desire to come back to Florence. Apparently rubbing his snout for a return trip dates back to the 1700s.

Little Pig is housed in an attractive marketplace that was built by Cosimo de’ Medici between 1547-1551. Bad merchants, who had the misfortune of going bankrupt, were spanked here before being sent off to prison. I couldn’t find a description on what the spanking entailed.

The overflowing Mercato Nuovo or the Straw Market where bad merchants were once spanked.

One more fact: There are copies of Little Pig found throughout the world, including one at the University of Arkansas representing the school’s mascot, a Razorback hog. I wonder if the students realize the origin of their statue?

I finished off my trip to Florence by admiring a real pig being roasted at the Christmas Fair being held in Piazza Santa Croce. He smelled yummy. Unfortunately, we were under strict orders from our tour guide to be on time for the trip back to our ship… or be left behind, so I didn’t get to try a sample.

NEXT BLOG: We will check out Michelangelo’s David, Peggy’s all time favorite sculpture.

15 thoughts on “There’s This Pig in Florence…”