The mutant vehicles at Burning Man 2012 provided ongoing amusement, as they always do. I encountered this Woolly Mammoth at the port-a-potty. Later he came down our road.

I was standing in line for the port-a-potty when the Woolly Mammoth with massive tusks came by and dropped off a half of dozen people to join us. He was one hundreds of wonderfully imaginative ‘mutant vehicles’ that provided transportation across the seven square miles of Black Rock City during Burning Man 2012.

At any given time of the day you find these Black Rock City licensed vehicles parked in camps, driving up and down the roads, and wandering willy-nilly across the vast open spaces of the Playa. They range in size from one-person scooters up to fifty-person busses. Each one looks like something it isn’t. There are dogs, cats, rabbits, flowers, jungles, bugs, fish, dragons, stagecoaches, ships, yachts, and even a wart hog. The list goes on and on.

One of the main attractions at Burning Man 2012 was a fire shooting steam punk octopus that went by the name El Pulpo Mechanico. Created by Duane Flatmo from Humboldt County, California, El Pulpo’s eight tentacles shot ten-foot high flames into the air. His head added a thirty-foot spout. A typical night of flaming used some 200 gallons of propane.

Peggy came across El Pulpo Mechanico resting up for his night of carousing out on the Playa. He had also been at Burning Man 2011. (Photo by Peggy Mekemson) 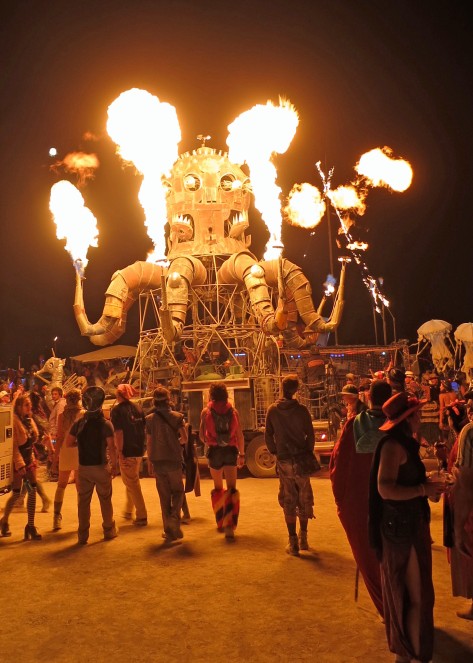 Some Burners at Black Rock City require a yacht for transportation. This boat is named Christina.

Others at Burning Man are quite happy with a one-seater. I think Yummy was the name of the camp, not the vehicle. (Photo by Peggy Mekemson)

We were admiring theBurning Man 2012 Temple when this wart hog stopped by for a visit.

Climbing on this orange bus just has to involve a ride to somewhere mysterious and wonderful.

Check out the toothy grin on this Burning Man 2012 vehicle. The creature’s name is Disco Fish.

Sometimes mutant vehicles at Burning Man can appear downright scary, such as this dragon. Flame shoots out of its mouth at night. Note his tire tread skin.

This bear and her cubs show up annually at Burning Man. She and her babies are pulled by a bicycle so technically she isn’t a mutant vehicle. I included her on an earlier blog. I couldn’t resist her charm for my last photo in this post. (Photo by Peggy Mekemson)