OK, I am a little strange. I admit it. But Goofy… no way. I confess, however, I’ve had a long affinity for the floppy eared, big-footed fellow. Yuk Yuk.

It all started when my mother told me that a cousin of hers, Vance ‘Pinto’ Colvig, was the original voice of Goofy.

I had never heard of Pinto so I looked him up. Sure enough, he was the voice of Goofy. In fact Walt Disney was so taken with the voice that he gave Goofy a starring role as one of Mickey’s best buddies.

I was willing to let the connection slide after that. I did trot Goofy out on an occasion, however. In the competitive world of dating, it’s valuable to have a famous relative, even if he’s a cartoon. More than one woman was impressed with my shirttail link, including my wife Peggy.

I never used “I am related to Goofy,” as a conversation starter, though. It was more like a third or fourth date thing.

When Peggy and I recently moved to the Applegate Valley in Southern Oregon, I decided to do more research on Pinto. He’s a native son of the area and grew up in the historic town of Jacksonville, which is where Peggy and I go to play.

Turns out Pinto’s big brother, Donald Colvig, married my mother’s aunt, Star Marshall. I guess that made my mother a second cousin, once removed and makes me… nothing. But I am still going to claim Goofy. And there’s more:

A painting of Bozo

Pinto was a very talented man who spent his life making people laugh. Here are some of his other accomplishments. He was: 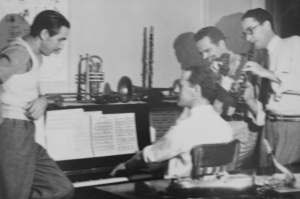 In this early photo, Walt Disney listens in on a song. Pinto is on the right, playing the Clarinet.

It’s quite a legacy. Pinto also had a nationally syndicated comic strip and was co-owner of an animation studio. Interestingly to me, Pinto was also one of the first people to urge that warning labels be put on cigarettes. ( I spent three decades doing battle with Big Tobacco.)

5 thoughts on “When Being Goofy Isn’t Enough”