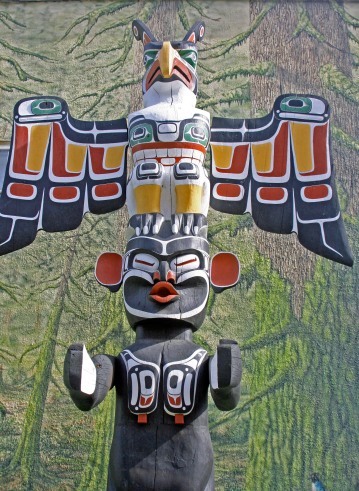 The totem pole of Thunderbird and the Wild Woman of the Woods found in Duncan, British Columbia on Vancouver Island.

Third times a charm. Right? Peggy and I are out kayaking among the Orca whales up off the northern tip of Vancouver Island as this blog is posted. Or I should say reposted for the second time. It’s appropriate given our trip, however. We are in First Nation country and we once again drove through Duncan. And, as many of you know, I am a big fan of First Nation and Native American art. –Curt

Dzonoqua comes sneaking through the woods, hands outstretched, red lips pursed and whistling, “ooh, ooh” to attract small children who have wandered into the forests. Some stories say she eats the whiny ones. She is also known as the Wild Woman of the Woods or Mrs. Bigfoot. Her large, dangling breasts capture the spirit of Salmon. Thunderbird perches on her shoulders. His wings crash together and make thunder; his eyes shoot out lightning.

Peggy and I, along with our friends Ken and Leslie Lake, visited Duncan BC on Vancouver Island to check out the numerous totem poles carved by First Nation artists and placed throughout the town.

The close relation of First Nation people to Bear, Eagle, Raven, Whale, Owl, Wolf, Beaver, Salmon, Otter and other animals stretches back to ancient times. Families would adopt particular animals as their totems and then carve these animals into totem poles. The poles would serve to both protect and instruct the families. Some families were even known to shape shift into their totem animal. (Jacob, morphing into a wolf in the Twilight series, is a modern example.)

The arrival of whites in the Northwest had a devastating impact on the people and culture of the First Nation tribes. Disease wiped out whole populations. The practice of native religion and the carving of totem poles were prohibited. It wasn’t until the 1930s that the art of totem pole carving was revived.

Duncan BC and native artists have done an excellent job of displaying totem poles representative of the north coast. Visiting the town, located on the Trans-Canada highway halfway between Victoria and Nanaimo on Vancouver Island, is well worth the stop.

To enhance your visit, I highly recommend stopping by the Visitor’s Center and picking up the book, “The Totem Walk of Duncan” written by Joan Chisholm and illustrated by Crysta Bouchard and R. Howe. For more information go to: http://www.downtownduncan.ca/duncan_totem_tourNEW.html

Thunderbird in flight. I loved the bright colors of this totem pole in Duncan BC.

This totem pole in Duncan BC shows the spirit of the First Nation artist in the eagle’s chest. Eagle rests on Whale and has Wolf carved on his flukes. Both Whale and Wolf provide powerful protection for the person resting his hands on the flukes.

This totem pole was meant as a thank you from one chief to another. Raven perches on top and delivers the pole. Eagle is under Raven and represents the power of the chief, a member of the Eagle Clan. The chief’s son is next. His open hand symbolizes “thank you.” Raven, like Coyote of the Southwest, is a trickster. Both are among my favorite mythological animals.

Most totem poles are highly symbolic. This is a heraldic pole. The frog on top represents wisdom, the bear below power and courage, and the seal a spiritual being that can travel easily between spiritual and physical realms. The red and black mean strength and protection. I see it as one pole accomplishes all.

The bear’s tongue and wide grin caught my attention in this Duncan BC totem pole. I thought at first he might be sampling the guy he is holding in his paws. Apparently it means he is about to shape shift.

I am struck by the sheer power captured in some of Duncan BC totem poles. This eagle is an excellent example.

A different perspective on Bear. I enjoyed looking at and photographing the specific faces seen on the Duncan BC totem poles.

And finally, a Duncan BC totem pole I simply couldn’t resist. How could anyone say no to a pose and eyes like this?

NEXT BLOG: We cross the border into Canada and are reintroduced to the delicate art of carving with a chainsaw.

One look at this magnificent bird I photographed two weeks ago tells the story of why the eagle was regarded as sacred by Native Americans. This eagle is located at a wildlife sanctuary close to my home in southern Oregon. It was named Jefferson until it laid an egg. Now she is called Mrs. Jefferson.

I think that the bird petroglyph on the left that Peggy and I found at Three Rivers is immediately recognizable as an eagle.

The mighty eagle may have ruled the skies of southern New Mexico but it was the Thunderbird that ruled the heavens. A flap of its wings would gather clouds and send thunder bouncing off the far mountains. Lightning would shoot out of its eyes. The Thunderbird existed in numerous Native American and First Nation cultures.Peggy and I have found images  from New Mexico to Alaska.

A pair of Thunderbirds decorate a rock at Three Rivers. Compare it with the First Nation totem pole below that Peggy and I photographed on Vancouver Island in Canada. 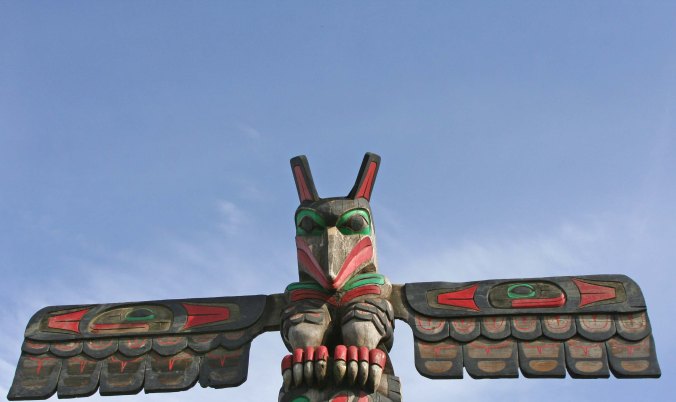 A First Nation totem pole Thunderbird Peggy and I found on Vancouver Island.

I find this petroglyph of what I assume is a Thunderbird both strange and powerful.

Another version of a Thunderbird found at Three Rivers Petroglyph site.

Turkeys, roadrunners, and even ducks can also be found among the petroglyphs of the Three Rivers Petroglyph site.

A roadrunner and its dinner. This Three Rivers petroglyph shows a roadrunner with one of its favorite meals, a snake. 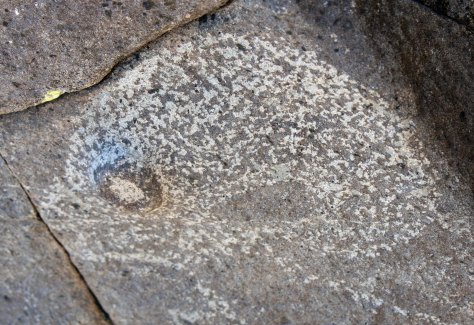 Is this a petroglyph of a bird’s head with its beak stretching out to the left? If so, it must be another work of the Rembrandt of the Jornada.

This petroglyph strikes me as either a duck or goose. Note how the artist has taken advantage of the contour of the rock.

A backyard turkey. I caught this guy strutting his stuff to impress several hens who had gathered in our back yard. They ignored him. 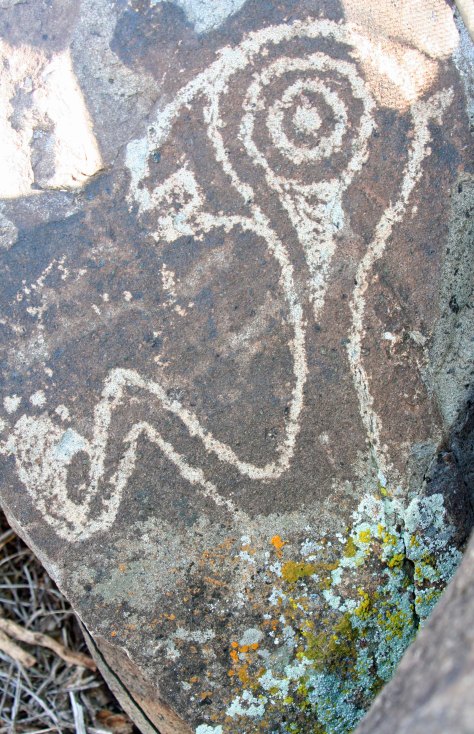 A really weird turkey? The head seems right but the clawed hands are something else. If this is a turkey, he has passed into the realms of the gods. On the other hand, if you have ever had a turkey attack you, as I did when photographing its chicks, this is a close approximation.

NEXT BLOG: What is a whale petroglyph doing in the desert?

Serious fishing boats are a reminder that the town of Port Alberni located in the middle of Vancouver Island, British Columbia is connected to the Pacific Ocean via Alberni Sound.

It felt strange to find a seaport in the middle of Vancouver Island. Our original goal had been to visit the Pacific Rim National Park but time and weather discouraged the trip. So we stopped half way at Port Alberni.

The town has a different feel to it than the Vancouver Island BC communities we visited on the east coast, more down to earth and less resort like. Saw and pulp mills once dominated the city’s economy but today the timber industry prefers to ship its logs off to China.

The good news here is that with the demise of the pulp mill the salmon returned and today, Port Alberni is the center of a major sports fishing industry. Like Campbell River, it bills itself the ‘Salmon Capitol of the World.” I suspect there are some interesting politics at work here.

The surrounding mountains, lakes and wilderness have also made the Alberni Valley a growing center of ecotourism.

We stopped at the visitor’s bureau to pick up tips on what we should see. And here it is time for an editorial comment. Canada’s neighbor to the south could really learn something from British Columbia about the promotion of tourism. Not only do most communities have information centers, they are normally very attractive, staffed with friendly, knowledgeable staff, and filled with information.

British Columbia and its communities do an excellent job or providing attractive, information packed, visitor bureaus. This bear welcomes visitors to Port Alberni BC. 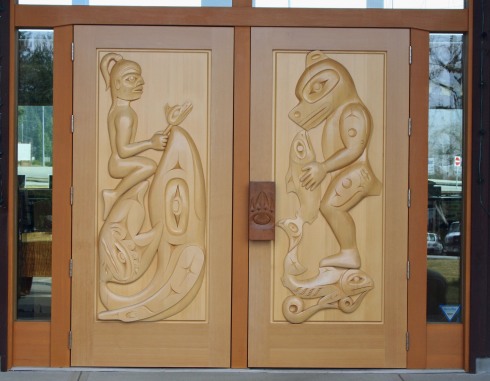 These doors into the Port Alberni Visitor's Center feature a First Nation theme and are another example of how attractive and welcoming the centers are. The US could learn a lesson from BC and Canada about the promotion of tourism.

“You have to visit Harbor Quay,” was the recommendation for the short time we had. So we did. The Quay provided a beautiful view of the Alberni Inlet that makes its way out to the Pacific Ocean and provides Port Alberni with its seaport status. The presence of fishing boats reminded us of another major Vancouver Island industry.

After lunch, Peggy and Ken took advantage of a carved Thunderbird and eagle for photo ops. We visited small shops and downed some of the best cake donuts we’ve ever eaten. It was then time to head back to Parksville. Port Alberni and the Alberni Valley definitely deserved more time.

Alberni Sound leads out to the Pacific Ocean. Clouds and rain limited our view.

My friend Ken Lake bravely sits beneath the grasping talons of a plunging eagle at Port Alberni.

Peggy prefers to play peekaboo from beneath the wings and all-seeing eyes of a First Nation Thunderbird. The Thunderbird makes thunder by flapping his wings together while the eyes shoot out lightning.