Welcome to “The Dead Chicken Dance and Other Peace Corps Tales.” I am presently on a two month tour of the Mediterranean and other areas so I thought I would fill my blog space with one of the greatest adventures I have ever undertaken: a two-year tour as a Peace Corps Volunteer in Liberia, West Africa. Every two days I will post a new story in book format.

When I have finished, I will publish the book digitally and in print.

The day before Cliff sent me scurrying after the errant urinalysis, Sargent Shriver arrived on campus.  I, along with several thousand other students, flocked to hear him speak. 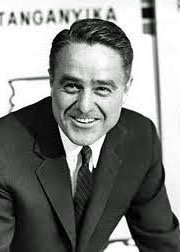 Three months before I was to enter Peace Corps training for Liberia, Sargent Shriver came to the Berkeley Campus and gave an insightful speech into what it meant to be a Peace Corps Volunteer. (Google photo)

John Kennedy recruited his brother-in-law in 1961 to set up and then head the Peace Corps. “If it flops,” Kennedy had said, “it will be easier to fire a relative than a political friend.” He gave Shriver one month to create the organization.

Shriver’s appearance on campus was an important event at Berkeley. In addition to heading up the Peace Corps, he still carried the aura of the Kennedy years. The University was also important to Shriver. We had provided more Volunteers than any other college in the nation

He captured us. Berkeley’s Free Speech Movement (FSM) had dominated our lives. Times had been serious, even dangerous. We were ready to laugh.

“But here on campus,” he went on, “I want to talk about today’s challenge to the young, to the American university student of the 60s… of what I think might be called a “free service movement.”

Shriver then used a quote from Bob Rupley, a 1962 Berkeley graduate and Peace Corps Volunteer, to describe what he felt the essence of the Peace Corps was:

“Apathy, ignorance and disorganization are the things we want to eliminate… in all areas in which we work. Clearly no Volunteer can hope for absolute success, nor can he even expect limited success to come easily. Clearly, the Peace Corps is not the responsibility of every American. And it shouldn’t be! In many ways, the life of a Volunteer who sincerely seeks to effect progress is miserable.”

Three weeks after making this statement Rupley was shot to death in Caracas, Venezuela while he was working as Peace Corps staff.

We were noted for being unreasonable at Berkeley.

Six months earlier the UC Berkeley Administration had declared that the Bancroft-Telegraph Free Speech area was closed and that there would be no more on-campus organization of Civil Rights demonstrations in the Bay Area.

The success of these demonstrations had upset powerful right-wing forces in California.  Telephone lines burned between the UC Administration, Sacramento and Washington DC. Free speech and the right to support off campus political efforts were sacrificed.

Some, like Mario Savio, had walked the streets of the South registering black voters and risking their lives to do so. In the summer of 1964 three of their colleagues had been killed and buried under an earthen dam near Philadelphia, Mississippi.

Many had been introduced to political activism four years earlier in the anti-HUAC demonstrations in San Francisco where the police had used fire hoses to wash protestors down the steps of City Hall. Most had participated in numerous protests against racial discrimination in the Bay Area since. (HUAC was the House Un-American Activities Committee, a hold over from the McCarthy era.)

Free Speech Movement organizers understood the value of demonstrations and media coverage. They had become masters at community organization and were focused in their vision to the degree they were willing to face police and be arrested for their beliefs.

The result was a series of confrontations that ended with the massive sit-in at Sproul Hall and the arrest of 800 students in early December. While I hadn’t served as a leader of FSM or been arrested, I empathized strongly with its objectives and had participated in many of the demonstrations. I even spent several hours in the Sproul Hall sit-in.

Heart pounding, I had waited in line and then stood up on the Dean’s desk in my socks and talked of rights and responsibilities. It was our right to oppose racism; it was our responsibility to do so.

Out in the hall, a group of students sat on the floor… surrounding Joan Baez and singing protest songs. I sat down and joined in. “We shall overcome some day…” I was part of something, something much larger than myself.

“You have demonstrated your leadership in the generation of the ‘6os,’ the generation that will not take ‘yes’ for an answer, which has shown an unwillingness to accept the pat answers of society… either in Berkeley, in Selma or in Caracas, Venezuela,” Shriver noted.

“Once in every generation fundamentals are challenged and the entire fabric of our life is taken apart seam by seam and reconstructed…. Such a time is now again at hand and it is clear that many of you are unreasonable men (and women), restless, questioning, challenging, taking nothing for granted.”

We had not forfeited our rights at Berkeley, nor had we, according to Shriver, forfeited our claim to a fellowship with the Peace Corps. And this, at least in part, was why I had been accepted as a Volunteer. Participation in the Free Speech Movement was regarded as a plus, not a minus.

But the time had come to move beyond protest. Shriver concluded his talk with a ringing call for service.

“We ask all of you who have taken what you have learned about our society and tried to make it live, to join us in the politics of service, to demonstrate by doing, to the poor and the forgotten of villages and slums in America and the world, what you have learned of Democracy and freedom and equality. The times demand no less.”

“It is time not just to speak, but to serve.”

Next on my to-do list for joining the Peace Corps was the dreaded FBI security check.

I had been up to mischief at Berkeley, hung out with the wrong people, been seen in a few places where law-abiding people weren’t supposed to be, and had my name on a number of petitions.

“And where were you Mr. Mekemson the night the students took over the Administration Building?”

Maybe there was even a file somewhere; maybe it was labeled ‘Radical!’ J. Edgar Hoover saw Red whenever he looked at Berkeley.

Soon I started hearing from friends. The man with the badge had been by to see them. The background security check was underway. One day I came home to the apartment and found my roommate Jerry there, looking very nervous.

“I have to talk to you Curtis,” he blurted out. “The FBI was by today doing your Peace Corps background check and I told them you had been holding communist cell block meetings in our apartment.”

My degree in International Relations had included a close look at Communism. I found nothing attractive about the system.

The closest I had come to joining a leftist group had been the Free Student Union. Yes I had held a committee meeting at our apartment but I had also severed my relationship with the organization. The folks behind the Union were more interested in radicalizing the student body than serving it. That was not my interest.

I was not happy with Jerry that night or for some time after. I assumed the Peace Corps option was out and begin thinking of alternatives. They were bleak.

As it turned out, a few weeks later we received final notification from the Peace Corps. We were accepted. The people who said good things about me must have outweighed the people who said bad things. Either that or Jo Ann looked so good they didn’t want to throw the babe out with the bath water.

Or possibly the majority of other students signing up for the Peace Corps from Berkeley in 1965 had rap sheets similar to mine. I suspect that was the case.

Next Blog: If this is the Peace Corps, what am I doing in the naked man line at the Army Induction Center?