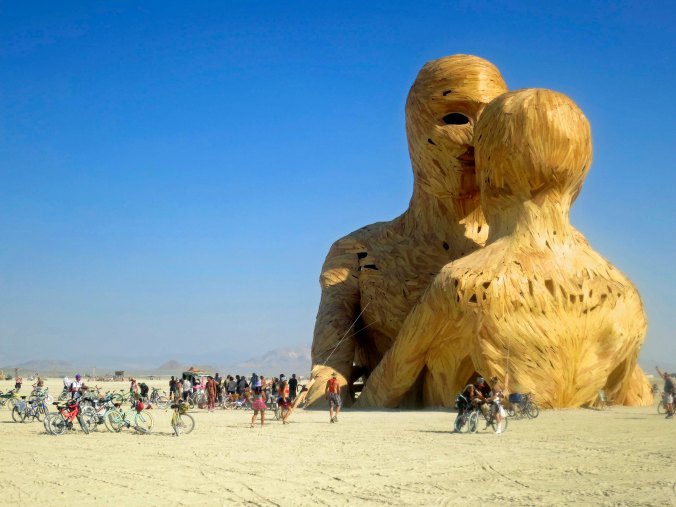 Monumental sculpture has become a tradition at Burning Man. 2014’s Embrace the Dawn by the Pier Group out of Reno, Nevada is a prime example.

Monumental art has become a tradition at Burning Man. Each year I return to Black Rock City excited to see the latest creations. Last year, the Truth Is Beauty sculpture pulled me to it like a moth to flame. This year it was the 72-foot tall sculpture called Embrace by the Pier Group out of Reno/Sparks, Nevada. Related groups in Portland, Oregon and Vancouver, B.C. Canada also worked on the project.

Working out of a huge warehouse studio in Reno known as the Generator, the Pier Group has created several art pieces for Burning Man, including another one of my all time favorites, a huge sailing ship sunk partway into the desert.

This Spanish Galleon, named La Llorona, was created by the Pier Group for Burning Man 2012.

This year the Pier Group had hoped Embrace would become the 2014 Temple. Matt Schultz, the lead artist, envisioned Embrace as a space where people could “sit, reflect, look up, feel the wind through the sculpture, and think about life and love.” Another project was selected. That didn’t stop Matt and the Pier Group, however; they went ahead and built the monumental sculpture anyway, much to the benefit of Burning Man and the 67,000 people present.

In this view, it appears the couple is kissing. (They weren’t.) The space on the bottom provided access to the figures where you could climb up into the heads and look out through the eyes. 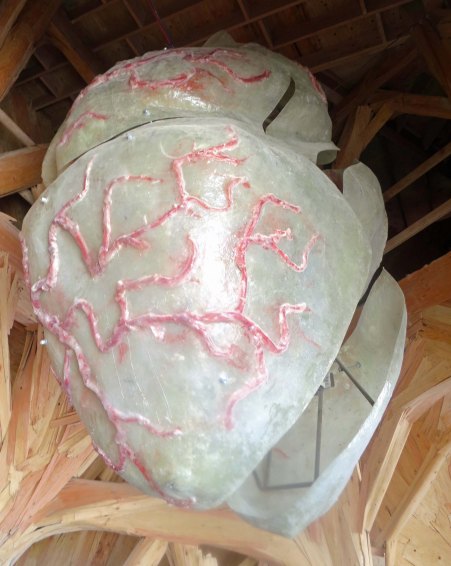 Each of the figures had a large, unique heart that had been created by artists in Portland, Oregon and Vancouver, BC. 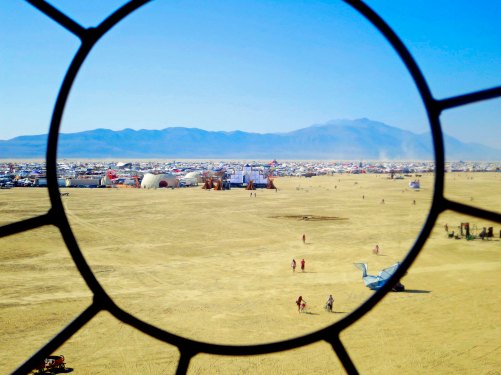 Looking out at Black Rock City through the eye of Embrace.

Dramatic art inside the head of Embrace.

More head art. Light is coming in from the top of the head, which was left open so Burners could see the stars at night.

This night photo was taken by Don Green, a member of our camp. The red high heel is a mutant vehicle.

The decision was made to burn Embrace at dawn, which, to my knowledge, was the first major burn at Burning Man to take place in the morning. A significant number of Burners present had partied far into the night and 7:00 a.m. had come awfully early. Some were up so late they decided to stay up all night. A few who had come to watch the burn slept through the event. It was amazing how quickly the 160,000 pounds of wood in the sculpture went up in flames.

Preparation for a major burn can take hours. Burners arrive early to get prime seats in the dirt. The trucks in the middle are all part of the preparation.

Another perspective on preparation for the burn.

I like this photo because it provides a view of the size of the crowd that stretched all the way around Embrace. The Burners in the right center of the photo are trying to catch up on sleep.

Mutant vehicles, like these shown here, also stretched all the way around the burn circle. (Photo by Peggy Mekemson.)

One thing is guaranteed, any group that gathers at Burning Man is bound to be colorful. Check out the leggings. 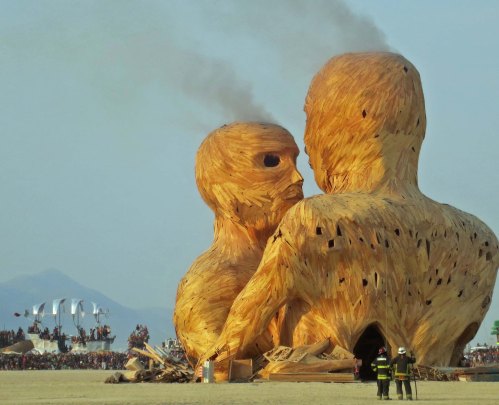 Two puffs of smoke announce the beginning of the burn. Firemen stand watch.

Flames are so intense that mini-tornadoes, large dust devils, are created. (Photo by Peggy Mekemson.)

And soon only a skeleton remains.   An interesting dust devil outlines the head. (Photo by Tom Lovering.) Next Blog: I take another detour from Burning Man to travel back in time to UC Berkeley’s student revolution 50 years ago. I was there.