I have often wondered what part, if any, the strange rock formations in the Grand Canyon played in the development of the Hopi belief about Kachina deities.

Five squirrels with long tufted ears just went charging past our van… in a row. I think it must be love and Peggy agrees. We speculate a female is leading the boys on a glorious romp. “Catch me if you can!” she giggles. The Albert Squirrels are excited to make babies and perpetuate the race, or species, if you want to be biologically correct. Lust is in their hearts. Or maybe it’s just the guys working out territorial differences.

We are located at a KOA in Flagstaff, Arizona as we prepare for our raft trip down the Colorado River. It’s a big campground. Everywhere we look men and women wearing yellow shirts are busily preparing for the onslaught of summer tourists. It feels like a beehive, or squirrel’s nest. The camp cook tells us 28 people work here. Jobs are highly specialized. The man who straightens out misplaced rocks stopped by to chat with us this morning.

Yesterday we watched two employees struggle for an hour on laying out the base of Teepee. It had all the flavor of an old Laurel and Hardy film. They kept measuring and remeasuring the angles, first one way and then the other. I expected one to leap up and start chasing the other around camp with a 2×4.

We wonder what the Kachina deities who live in the San Francisco Mountains overlooking our campground think about the squirrelly activity taking place beneath them. There are bunches of them up there, over 300 according to Hopi lore, and each one has a lesson to teach, wisdom to disperse. They come down from their perch in the winter to share their knowledge. I suspect they would have made quick work of the Teepee project.

Peggy and I hike up the mountain following Fat Man’s trail. Of course there is no irony here as we desperately try to beat our bodies into shape for the Canyon trip. The trail’s name suggests this is a gentle start. Instead it takes us straight up into a snowstorm. The Kachinas are rumored to mislead people under such circumstances.

Once they had the mountain to themselves but now they have competition. Technology has arrived. Tower after tower bristling with arrays of tracking, listening and sending devices look out over the sacred lands of the Hopi, Navaho and other Native Americans.

It’s hard not to think Big Brother is watching. Or not be disturbed by the towers’ visual intrusion. But their presence means we can get cell phone coverage and climb on the Internet. We are addicted to these modern forms of communication so it is hypocritical to whine, at least too much.

But back to the squirrel theme, Peggy and I are a little squirrely ourselves as we go through our gear and get ready for our grand adventure. I am nervous. This is my first multi-day river trip. What have we gotten ourselves into? Do we have the equipment we need? Will we survive the rapids? What will the people who are joining us be like? What challenges will we face that we are ill prepared for? There are many questions and few answers. 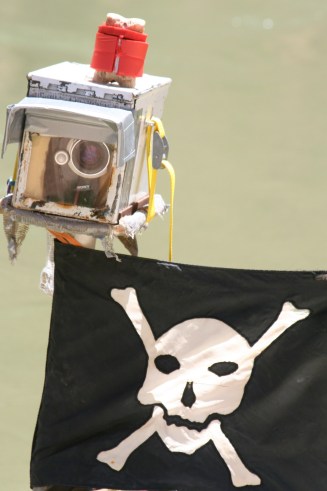 Would pirates and bones wearing life vests be part of our trip? Would my every move be recorded on camera? 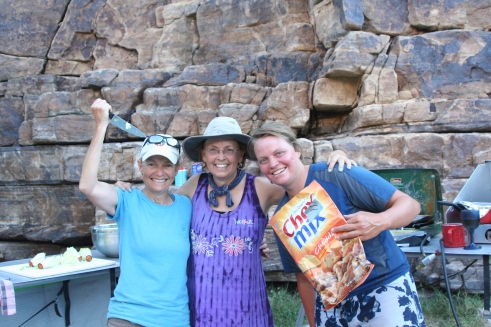 Would people who should not be let near knives suddenly be wielding them?

Would we be stalked by threatening spirits of the Canyon? 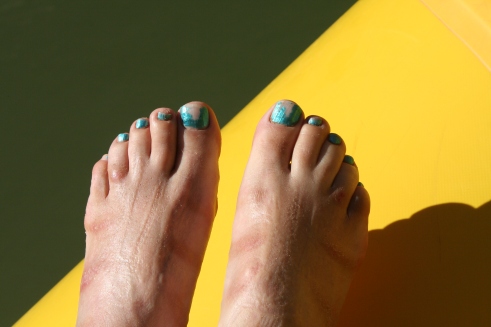 And, horror of horrors, would I be required to paint my toenails to keep rafts from flipping in the canyon? The answer to one of these four questions will be revealed in my next post.

I finished my last blog with a picture of this view across the Colorado River from my camp near Tanner Rapids. This and the photo below demonstrate how much color depends on the time of day.

Close to the same shot midday, and the reason why you want to visit the Grand Canyon early in the morning and late in the afternoon.

After my close encounter with the Mouse’s tail, I was ready for breakfast. (See my last post below.)

I visited a bush, fired up my MSR white gas stove and soon had a cup of coffee in my hand and hot morning gruel (oatmeal) in my tummy. I dutifully downed my daily ration of five dried apricots. With breakfast out of the way and a second cup of coffee to enjoy, it was time to get out my topographic map and contemplate the adventure of the day.

My intention was to work my way up the Colorado River following the Beamer Trail to where it was joined by the Little Colorado. It was one of the least traveled trails in the Canyon and chances were I would have it to myself.

The trail was named after a prospector who had searched the area for gold in the 1800s, but it also incorporated ancient sections of trail the Hopi Indians had used to reach their sacred salt mines. Hopi legend claims their ancestors emerged into this world from a cave in the bottom of the Little Colorado River Canyon.

I found the combination of history, mythology, isolation and scenery quite attractive and was eager to get underway. Unfortunately, my body had other plans. It was going on strike.

On the edge of my campsite was a 20-foot section of small boulders I needed to negotiate to rejoin the trail. Normally I would sail through such an obstacle, stepping on and between rocks as the situation called for. My first step on top of a rock sent me crashing down.

I had absolutely zero balance. My muscles were refusing to function. While I didn’t reach the insane cackle level of the day before, I did find myself giggling. Dorothy’s Scarecrow was a paragon of grace in comparison to me. I made it a whole hundred yards before declaring that the day was over.

An overhanging rock provided shade, protection from the elements, and a view of the Tanner Canyon Rapids. I spent the day napping, snacking and watching rafters maneuver through the rapids. I also read a book on the Grand Canyon by Joseph Wood Krutch. The most energy I expended was to go to the river and retrieve a bucket of water. There was plenty of time to let the mud settle. 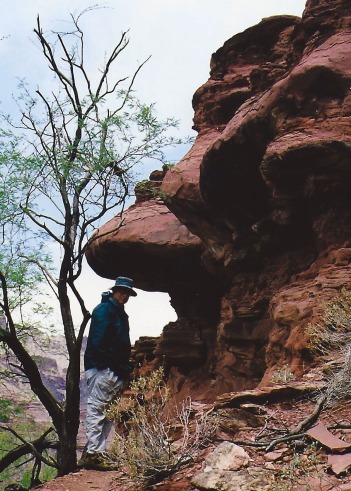 I made it as far as an overhanging rock a hundred yards from my campsite. Thirteen years later I pointed out my hideaway to Peggy. It may hold the record for the shortest backpacking trip in history. 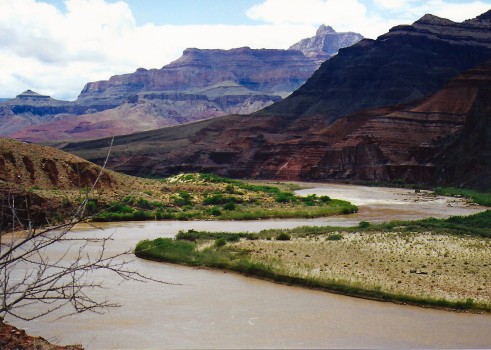 I could watch and hear the Tanner Rapids from my hideaway. It was not a bad way to spend the day.

That evening I sipped a cup tea laced with 151-proof rum and watched bats fly through my ‘cave’ picking off mosquitoes. They were close enough I could have touched them. It was like I was invisible, as I had apparently been to the mouse and the night stalker. Strange, unsettling thoughts of nonexistence went zipping through my mind. Being alone in the wilderness is conducive to such thinking. The Canyon adds another layer.

Peggy tried out my seat where I sat and read all day and watched bats come though in the evening.

Day three arrived and it was time to explore my surroundings and whip my protesting muscles into shape. I still wasn’t ready for backpacking so I took a day hike back up Tanner Creek Canyon. Whatever creek had existed was waiting for future rain but the erosive power of water was plainly evident. This was flash flood country where a dry wash can turn into a raging torrent in minutes. Dark clouds demand a hasty retreat to higher ground.

I had nothing but blue skies, however, so I hiked up as far as I could go. The canyon narrowed down to a few feet and traveling any further called for rock climbing skills I didn’t possess. I sat for a while enjoying the silence and soaring walls. The isolation seemed so complete it was palpable. I was alone but not lonely. Nature was my companion. Reluctantly, I turned back toward my camp.

I spent the next two days hiking along the River. I backpacked up toward Lava Canyon the first day and then worked my way back down past Tanner Creek to Unkar Creek the second. My general rule was that if the trail appeared ready to make a major climb up the canyon walls, it was going without me. 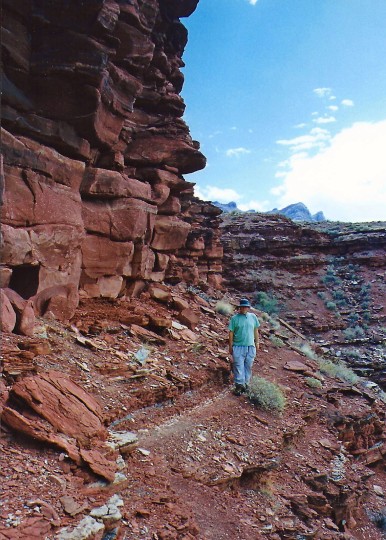 Here I am hiking up river toward the Little Colorado following a route that ancient Hopi Indians may have used. 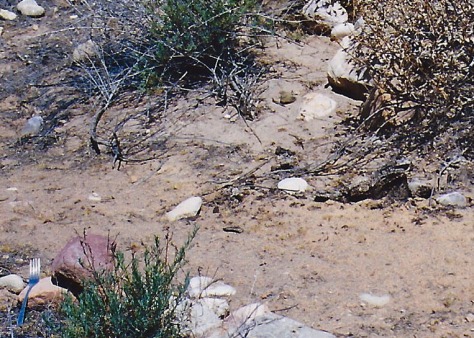 At one point when Peggy and I were backpacking up the Beamer Trail, we came to a fork in the trail and went left. (Yes, we did find the fork.) 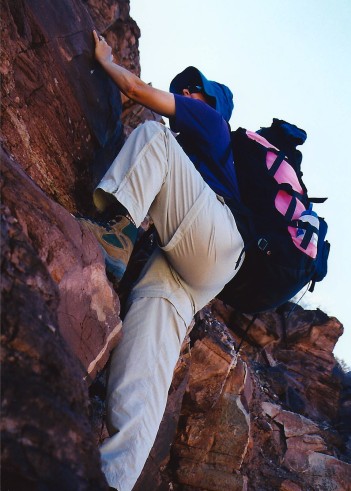 This was the result. (grin)

The only real excitement came toward the end of the second day when I discovered my left foot poised five inches above a Grand Canyon Rattle Snake that lay stretched across the trail, hidden in the shadows. He was a granddaddy of a fellow, both long and thick. And pink. My right leg performed an unbidden hop that placed me several feet down the trail. There is a part of the brain that screams snake. No thinking is required.

As soon as I could get my heart under control, I picked up a long stick and gently urged Mr. Pink off the trail. He wasn’t into urging. Instead, he coiled up, rattled his multitude of rattles and stuck out his long, forked tongue at me. He really did want to sink his fangs into my leg. I prodded more enthusiastically and he crawled off, albeit reluctantly. I memorized the location so he wouldn’t surprise me on the return journey.

My leg’s miraculous leap did suggest that my body was beginning to tune up. There would be no more malingering and feeling sorry for itself. The next day I camped at Tanner Creek again and the following day out I hiked out. The trip took me three hours less than it had taken to hike in.  I was tempted to go find the Sierra Club fellow but opted out for a well-earned hamburger and cold beer instead. My post-pudgy body demanded compensation.

I smiled at the Prickly Pear Flowers on my way out of the Canyon that I had growled at coming in.

A final view of where I had backpacked. You can see the Tanner Trail winds down the ridge on the left.