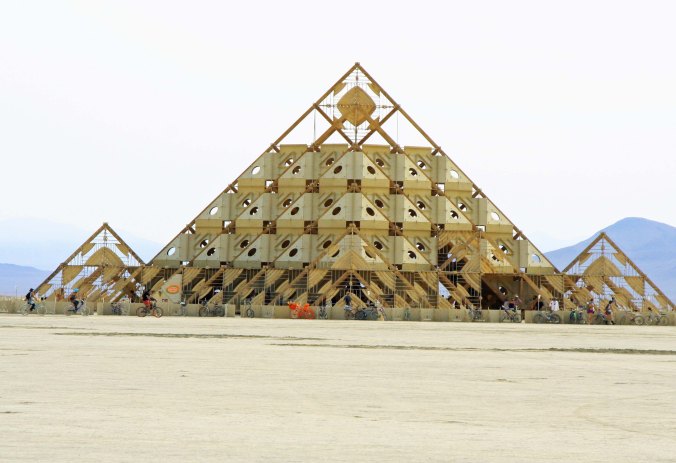 The 2013 Temple at Burning Man was built in the shape of a pyramid and made completely of interlocking wood pieces without the use of nails, glue, or metal fasteners. (Photo by Peggy Mekemson.)

We were sitting in camp when the first police car went by on Sixth Street. We hardly looked up.  With six law enforcement agencies patrolling Burning Man, police cars are a common sight. But then a second and a third car followed– and they just kept coming. I stopped counting at 40. Something big was coming down.

They drove out to the Playa and surrounded the Temple while blasting their sirens. Rumors were rampant. Was it a major drug bust? Was a riot about to erupt?

The police got out of their cars, formed two solid lines leading up to the entrance, and took off their hats. A woman, escorted by another person carrying a plaque, slowly made her way between the lines and into the temple. Her husband had recently passed away. He had been a BLM law enforcement officer who had spent several years helping patrol Burning Man.

The man had come to love the event and now he was to be honored at the Temple by his fellow law officers. Burners and lawmen alike stood silently in respect as the eulogy was read and the plaque was placed on the stone altar. Spontaneous applause filled the Temple as the woman left. 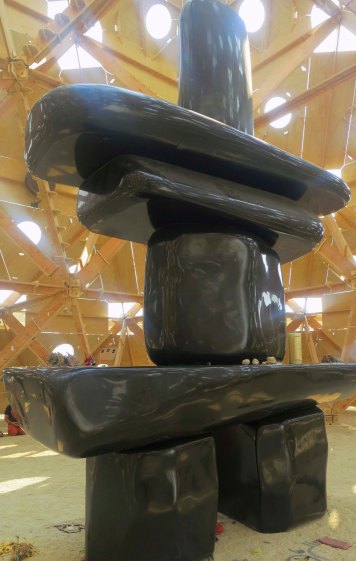 An altar or cairn made of black, igneous basalt graced the center of the temple.

Later, Peggy and I were sitting in the Center Camp Café when an older man sat down next to us and begin sobbing. I was about to ask if we could help when another person leaned over to me and said, “He’s been out to the Temple saying goodbye to his wife.”

The Temple is truly a unique, and I would say, sacred place. Thousands of Burners leave messages of love and grief, honoring friends and saying goodbye to those who have passed on. On Sunday, the Temple is burned and the messages are sent skyward in a ceremony of letting go that dates back to the very beginnings of humankind.

Each year’s Temple is different. The 2013 structure, designed and built by Gregg Fleishman of Culver City, California, consisted of a central pyramid and four smaller pyramids. Named “The Temple of Whollyness,” the sanctuary was constructed out of interlocking wood pieces without the use of nails, glue or metal fasteners.

This photo emphasizes Fleishman’s use of geometric forms in creating the Temple. 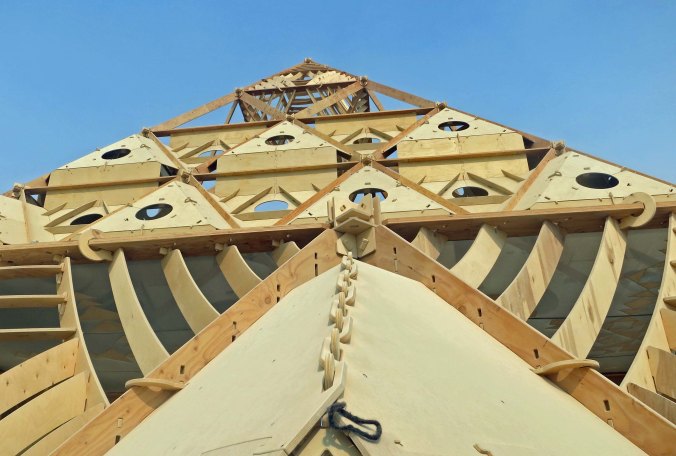 A close up of the Temple. Note the interlocking pieces. 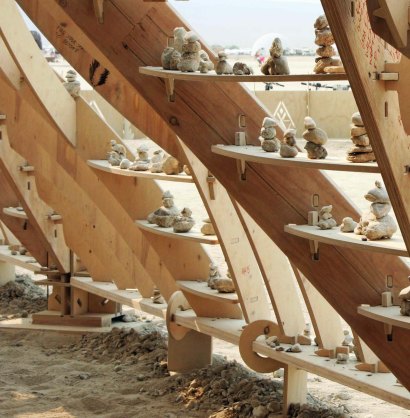 Small sets of stacked rocks soon filled all of the Temple’s flat spaces matching the large cairn inside. Cairns, BTW, are used in the wilderness to mark trails. They mean that you are on the right path. (Photo by Peggy Mekemson.)

Inside the Temple people quietly meditate or write notes to be left behind. Gongs, located on the walls, provided soft, melodious tones. The altar is covered with tributes such as that left behind by the wife of the BLM officer.

Tributes, such as this, filled every available wall space by the end of the week.

A tribute to a fallen comrade.

Dozens of touching tributes are also left for family pets. This one to Dobber was signed, “Your Dad.”

I conclude with my favorite pet tribute. “Go get the ball, Zippy!” I suspect if there is a dog heaven, they have tennis balls there.

NEXT BLOG: It’s time to check out the strange world of Mutant Vehicles.