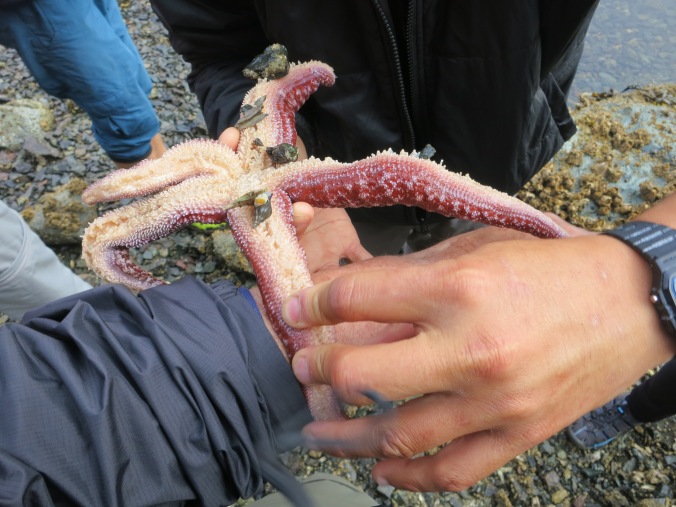 Quy bent the starfish over my wrist, and it clipped hair off my arm while I took a selfie of the process.

I’ve never been much of a with-it type guy. When there is a fad, I try to do the opposite. But I confess I’ve tried a selfie or two. And I just had to take a picture of the starfish clipping hair off of my arm. When Quy picked up a starfish on our six-day, British Columbia sea kayak adventure and offered to demonstrate pedicellariae at work, I was the first to volunteer. Pedicellariae what, you say?

While you are probably stumbling over the word like I did, I’ll explain how it works. Starfish have a defense mechanism for destroying tiny parasites that land on their skin. They have tiny claws that cut the bad guys in half. If you put these claws under a microscope, they look like your worst nightmare. (Check this out.)

Quy, however, assured us that while the pedicellariae would define our hairs as enemy invaders and clip them off, there would only be a slight pulling sensation with no harm done to us. Easy for him to say, right. But that’s what happened. Quy bent the arm of the starfish over my wrist and I felt the pulling sensation. When he removed the starfish, my arm was bare. Peggy was up next.

Here is the innocent starfish, happily at home in Johnstone Strait before Quy picked him up to clip hair.

And here, the starfish goes to work on Peggy. Is that a smile or a grimace on her face?

I expected whales and striking scenery on our Sea Kayak Adventures’ trip, but hair-removing starfish, no way. The pedicellariae were only a small part of our second day, however. We kayaked from our campsite on Hanson Island to Compton Island on Blackfish Sound. Along the way we watched humpback whales and were once again awed by the beauty of the region. At Compton Island, we got to play with our food….

Coffee would be waiting when we got up each morning— to be followed by a hefty breakfast. Here, our guide, Nick, whips up French toast in the make-shift kitchen.

After breakfast, we had time to go for a brief walk. A fishing boat moves between islands on  Johnstone Strait looking for salmon.

We peered in to the green waters of the small bay we were camped on.

And were dazzled by the sun illuminated green of the forest. 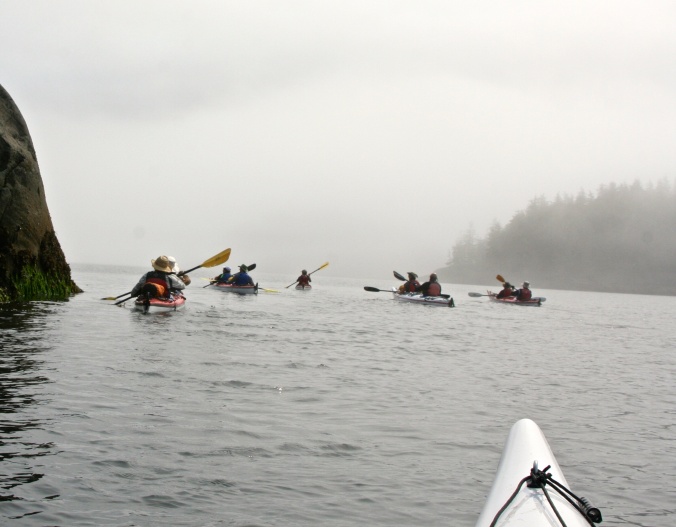 Morning fog greeted us as we worked our way around Hanson Island and into Blackfish Sound. (Photo by Peggy Mekemson.)

We checked out these seals and seagulls on a small island. Or were they checking us out? (Photo by Peggy Mekemson.)

By the time we had worked our way around the end of Hanson Island, the sun was beginning to peak through. (Photo by Peggy Mekemson.) 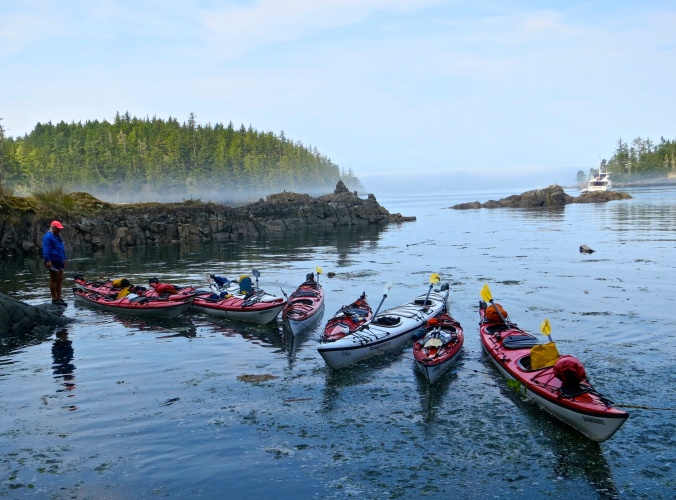 I took this picture of our kayaks at lunch. They were roped together so they wouldn’t stray.

After lunch, we followed out trip leader, Julia, out into Blackfish Sound. As you will note, most of our on-water photos were taken by Peggy. I was busy paddling. (grin) (Photo by Peggy Mekemson.)

A whooshing sound caused us to stop and search for whales. (Photo by Peggy Mekemson.) 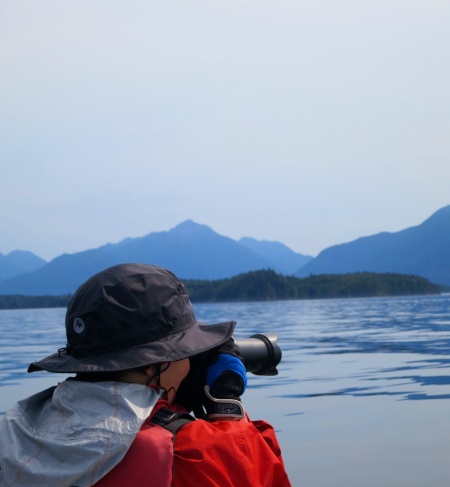 I took this photo of Peggy poised to capture a picture of the whale with her telephoto.

Thar she blows! We spot the tell-tale spume of a humpback whale as it surfaces. That’s a kayak paddle on the right.(Photo by Peggy Mekemson.)

The humpback, brought in closer by Peggy’s telephoto, dives back under the water. (Photo by Peggy Mekemson.) 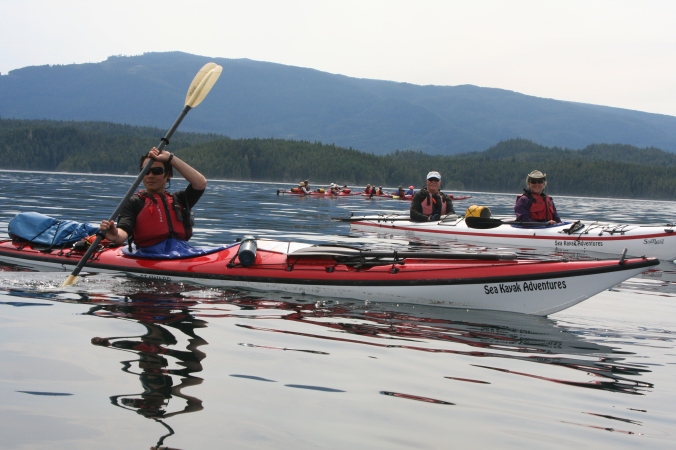 I liked the way the waves distorted the reflection of Quy in the water. Edie and Dave look on. The other kayakers are watching the approach of a cruise ship. (Photo by Peggy Mekemson.)

The cruise ship. You can imagine how big the ship seems from the perspective of a kayak. You do not want to get in the way. (Photo by Peggy Mekemson.)

Our group, having safely navigated through the whales and the cruise ships, relaxes at cocktail hour in our campsite on Compton Island. It was right about then that a fishing boat approached the beach.

“Would you like a salmon?” he called out— and to our enthusiastic, yes!, threw it overboard.

The ever energetic and vivacious Lindy retrieved the salmon and handed it off to Quy.

Quy was happy to pose with the salmon, until…

The true hero of the day was Dennis, who now lives in Idaho but has fished extensively off of Alaska. He offered to fillet the fish. 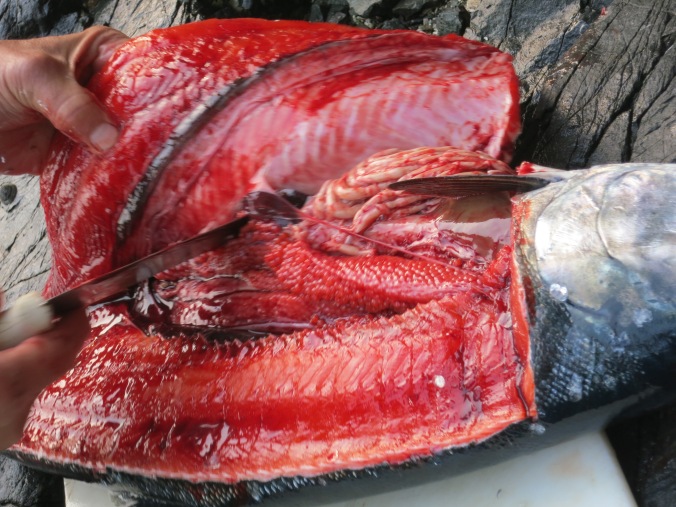 And displays the rich red meat, roe, and innards of the salmon. The salmon made a delicious lunch the next day, easily feeding all of us.

It was after all of the salmon excitement that we discovered the starfish, and these barnacles. 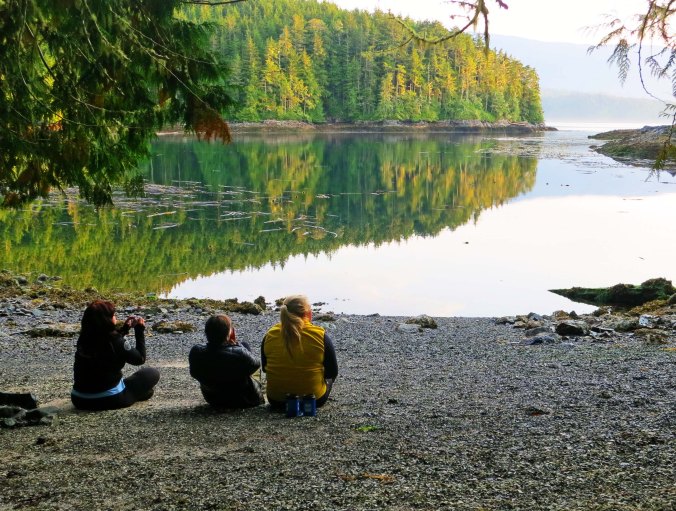 Members of our group enjoy a quiet moment at the end of the day, hoping for a whale to appear. Next blog: we kayak to Berry Island and hear a strange tale about Bigfoot.